Dave Barter joined eight other mountain bikers for a bikepacking trip across Spain, from the Mediterranean to the Atlantic.

British winter is downtime for those cyclists who enjoy wild camping by bike. Trailblazing is replaced by web browsing as we look for ideas for drier times. In November 2016, I stumbled across a bikepacking forum thread: ‘Musings upon a Spanish Coast to Coast’. The title sounded promising: a warm climate; a decent enough distance; and the word ‘musings’, which betrayed a small vein of eccentricity.

The thread’s poster, Duncan, had upped sticks to Spain. He had identified a largely off-road coast-to-coast route that hadn’t been ridden before, through countryside rarely visited by the tourist trade. We’d dip our front wheels into the Mediterranean Sea at the start and finish at the Atlantic Ocean a week or so later.

In between, we’d ride through mountain ranges, vast plains, narrow gorges, and the occasional town. We would cycle the path walked by those following the Camino del Cid, a route of pilgrimage from Valencia to Burgos carved out in memory of famous Spaniard Rodrigo Díaz de Vivar – El Cid.

In May 2017, nine bikepackers lined up awkwardly for a group photo in Tarragona, with the Mediterranean in the background. A few were friends; others were strangers. Our common bond was Duncan, who’d planned the route and sketched out some of the logistics. And it was Duncan who corralled us, calling an end to the equipment faffing and leading us out of town. 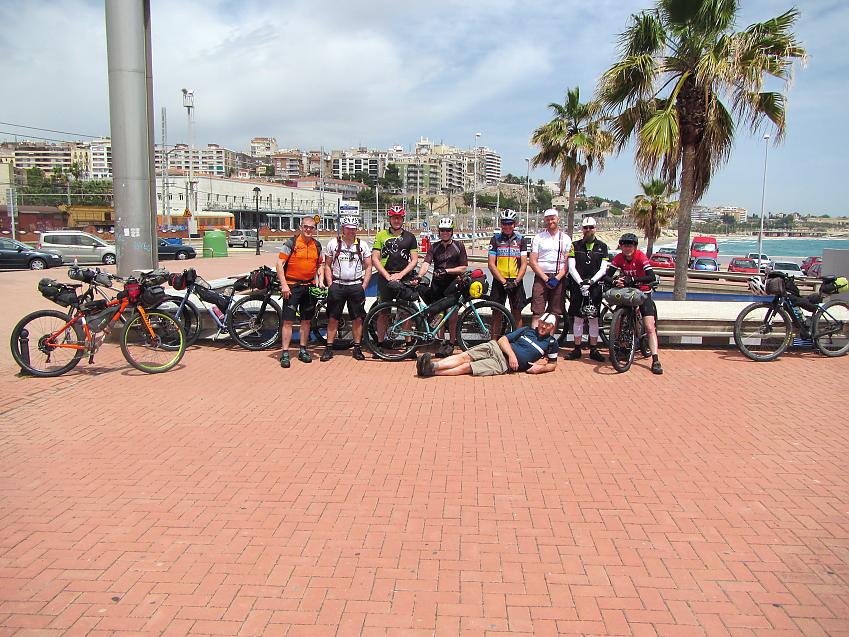 Day one, on the shores of the Med

For the first few miles, we hugged the shoreline through to Cambrils. Then we waved a fond farewell to the Spanish coast and headed inland up a deserted road climb. Traffic disappeared. It’s no exaggeration to say that it didn’t return
until the last day in Bilbao.

Circling birds of prey eyed us as we toiled up the hill in the midday heat. Duncan told me of professional road races that visit these roads. I could see why: they were perfectly surfaced and bisected stunning countryside. I began to inwardly recite
the lament of the British-born cyclist: ‘Why can’t we have this back home? No cars, nice roads, hot sun…’

In the heat of the Spanish afternoon, we pedalled along empty roads and dusty tracks through Gratallops and a beautiful valley system, which led us up to a climb into the village of El Molar. Our ‘adventure’ ethics were a little compromised at this point; Duncan had booked us into a local restaurant and pre-ordered paella. I don’t remember hearing any complaints… 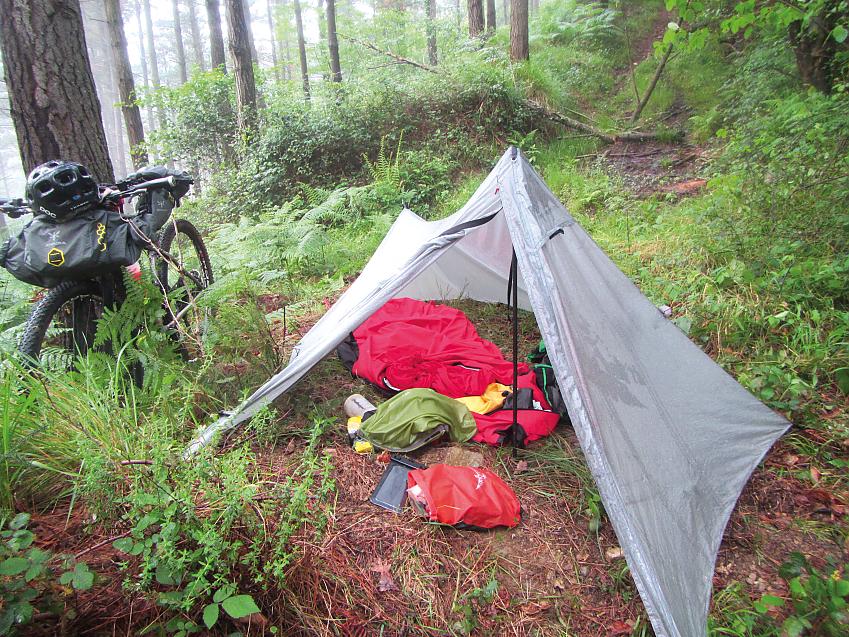 I do remember the restless night’s sleep that followed as nine men in lightweight bivvy gear slumbered in the grounds of a deserted bar. Let’s make that eight men;
I was kept awake most of the night by snoring from all quarters. Just as I was dozing off, a set of sprinklers began pattering onto the tents of Scott and Andy. Their choice of a well-manicured lawn for a pitch would have benefitted from further investigation in the dark.

Breakfast on the go

Our second day’s riding exemplified the rhythm we fell into for the remainder of the trip: an early awakening, followed by a finger-pointing session at those accused of snoring; an hour’s interlude prior to riding as eyes were rubbed, teeth scrubbed, and gear stuffed into bags and attached to bikes; then enquiries to Duncan as to ‘where are we getting breakfast?’.

Breakfast on day two was a local bakery in Mora d’Ebre. Bakeries and small bars provided most of our sustenance for the entire trip. Perhaps because our route travelled through less-visited regions, the owners were always delighted to see nine hungry faces. I was consistently impressed by the welcome that a bunch of bedraggled bikers received. 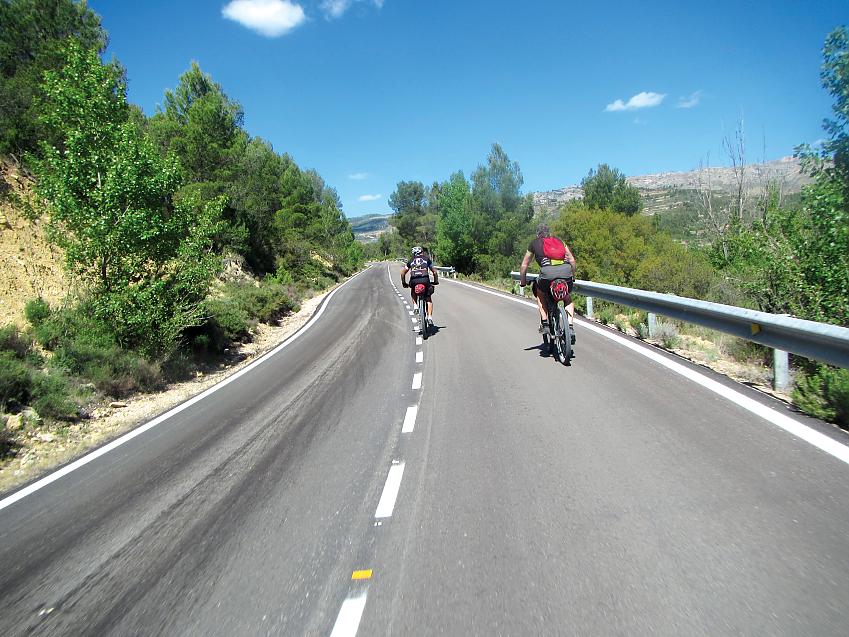 From Mora d’Ebre, we made our way out of town on deserted roads, eventually picking up the impressive Via Verde de la Terra Alta, a 40-mile stretch of disused railway track that carved its way gently up through the surrounding mountain range. We later left this track to ride down into a forest and through the stunning canyon of Estrets d’Arnes. Riding ranged from easy to rocky and technical as the gorge walls closed in and the sound of the rushing river grew louder. All too soon, the canyon was behind us. We skirted the cobalt blue lake of Embalse de Pena before a stinker of a climb into the village of Monroyo, where we had dinner then camped in a hilltop copse.

Given the sparse populace of northern Spain, camp spots were never hard to find. Duncan’s planning provided us with an eclectic mix: a disused train station, where I slept for a night in a signal box; deserted campsites closed for the season; roadside picnic sites; woodland refuges (the Spanish equivalent of bothies); and one night, after a day of bad weather, in a luxurious walkers’ hostel with showers, clean sheets, and no need to hunt breakfast the following day.

The route unfolded perfectly. During the early days, we focused upon gaining our trip’s high point, a col in the Maestrazgo mountains. We then meandered through the landscape of Calamocha, which opened into a vast plain reminiscent of those in North America. Under blue skies, farmers’ tracks guided us through this wondrous place. The landscape made me feel small, a riding experience that it is hard to find in the densely-packed countryside of the UK.

Our route had now joined the Camino del Cid. Each day’s ride was memorable. We had a nighttime dash through a darkened gorge, and an encounter with a wild boar. There was a nasty crash and a hasty trailside repair of a human with gaffer tape. There were long waits for riders who had missed the trail or taken an impromptu break for a coke. We had many stops to soak in the history and monuments we were passing. We enjoyed the occasional citrus shandy, a delicacy of northern Spain that had previously passed me by. And there was one incredible descent into the valley containing Bordecorex, where we tried to enjoy the scenery and the speed at the same time. 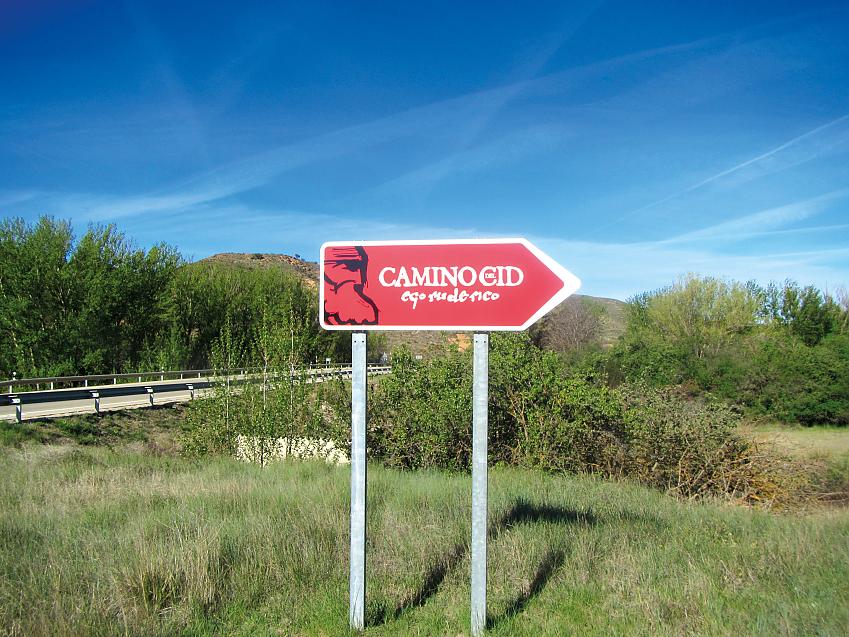 Our diverse group worked well throughout the week. We breakfasted together, then split into small factions, regrouping at meal and camp times. Duncan’s route was relatively easy to follow, and there were options for those wanting to take the road and have an easier day. The weather held up too, apart from a single section of hateful clay road that jammed my bike solid during a rainstorm.

Duncan’s route led us into Burgos, a magnificent town strewn linked to the legend of El Cid. Tourists travel here from all over the world to visit monuments, shrines, and an impressive cathedral at the centre of town. We had no time for sightseeing, however, as one of us had split a tyre 20 kilometres earlier, prompting a frantic search for a bike shop, followed by a rescue mission to deliver the new tyre to the stranded rider. 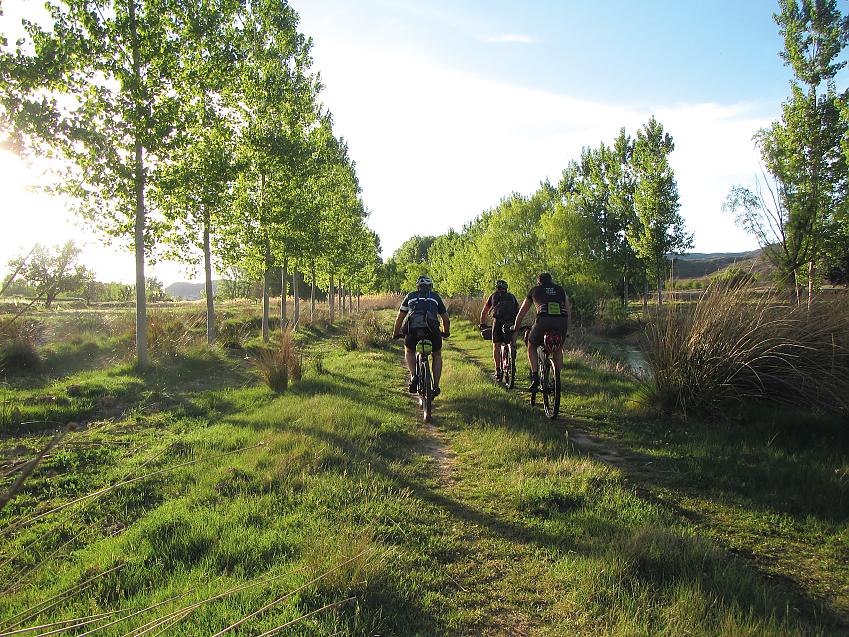 May: ideal for a Spanish C2C

From Burgos, we left the Camino del Cid and used a network of roads, trails and abandoned railways. These took us to Salto del Nervión, the highest waterfall on the Iberian peninsular. Or it would have been if there’d been any water flowing over it when we arrived. The lack of a scenic cataract was mitigated by fantastic singletrack trails within the Monte Santiago Natural Park, coupled with the spectacle of a cliff face that looked out on hundreds of metres of air. I gripped the platform’s handrail tightly as I took in the views of the valley below.

The final day’s riding to Bilbao saw me in reflective mood. Spain had delivered everything I’d hoped for back in a cold November in Britain, and May had probably been the perfect month to do this trip. The weather was mostly kind, hot enough to feel like a holiday but with enough wind and rain to remind me of home. Duncan’s route was nigh on perfect for an off-road rider carrying lightweight camping gear. 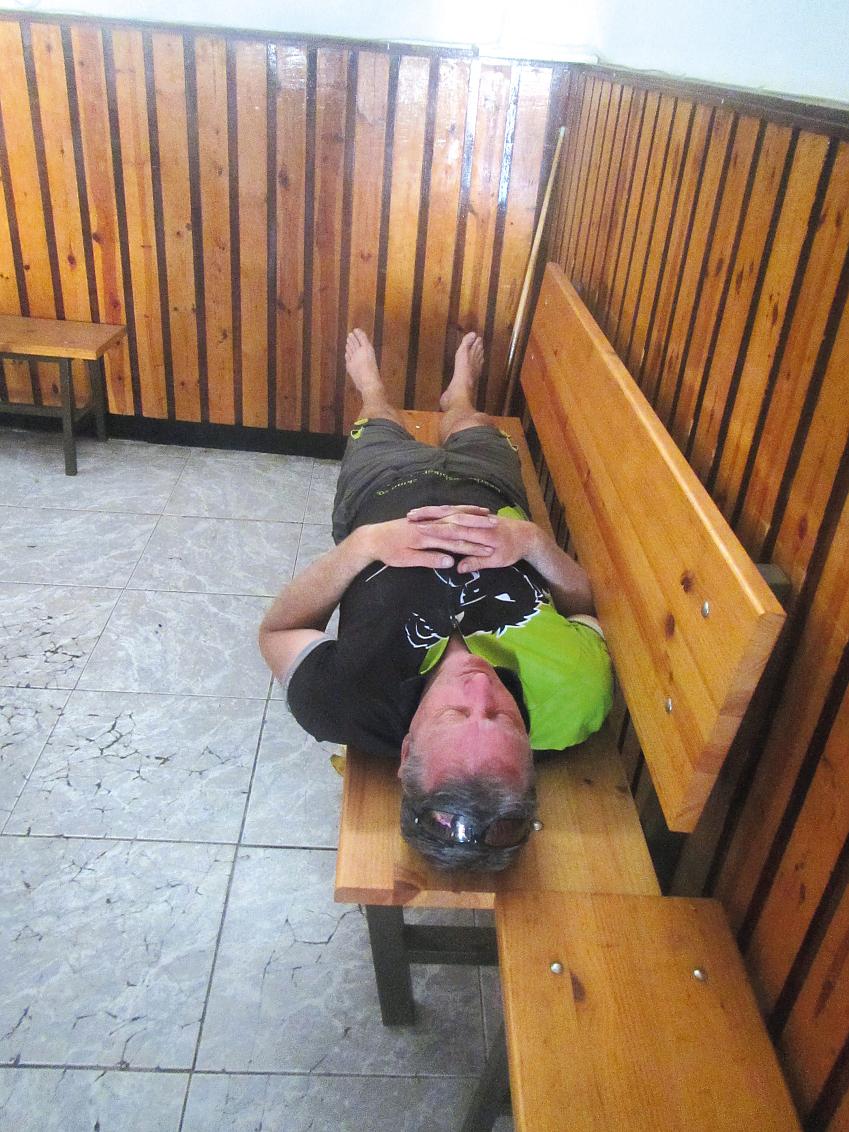 We had rarely felt out of our comfort zones, as we’d mostly ridden on wide gravel tracks and deserted roads. We’d experienced a wide spectrum of scenery, with plenty to grace the photo albums. The route did have some challenging days, and a degree of fitness was required. But we’d spent plenty of time lounging in bars and the pace was distinctly social. This was Nigel’s first bikepacking trip and we managed to bring him home alive – although he began to regret the extra weight of his battery-powered mat inflator after the second day. 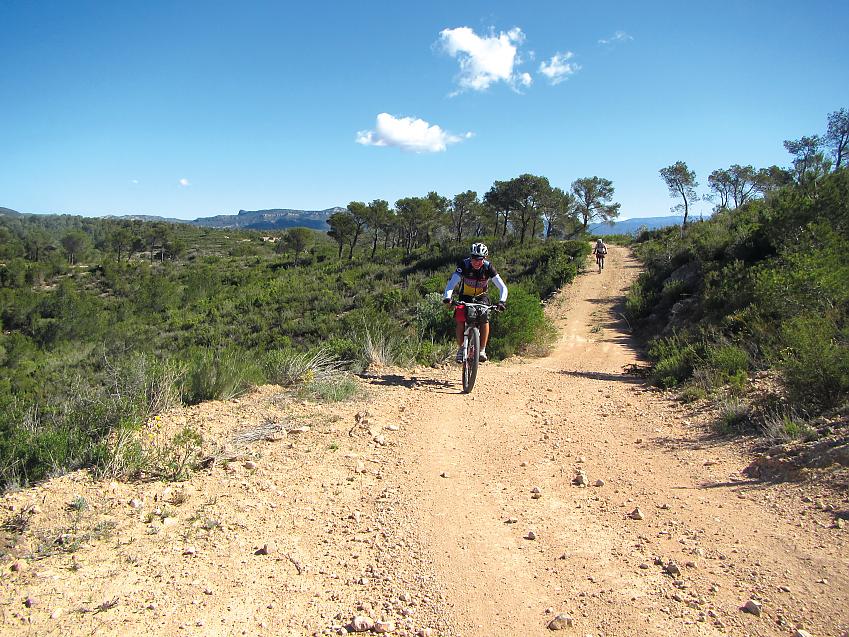 The Spanish had been uniformly inquisitive and friendly towards us bikepacking types. My lack of even the most basic vocabulary had embarrassed me more than it had hampered my ability to get food or shelter. Admittedly, Duncan’s fluency had helped, but I’d managed to get fed with a spectacularly bad mime in a Spanish bar during a solo afternoon’s riding, so it hadn’t been a necessity.

A seaside bar in Bilbao bore witness to our final regrouping as nine glasses were raised to our adventure and eight to Duncan our organiser. The inaugural Tarragona to Bilbao bikepacking C2C was declared a success. Some of us were already making plans for a return in 2018.

We flew into Barcelona with our bikes packed in polythene bags, and travelled to Tarragona via a combination of trains and cycling. From Bilbao, the airport is a short ride out of town. A high degree of technical ability is not needed but stamina and the ability to be relatively self-sufficient are – many days visit remote locations with few amenities. You need an off-road capable bike. I used low-tread 29×2.2in tubeless mountain bike tyres. Low gearing will also be needed, and rudimentary Spanish vocabulary will help a lot. 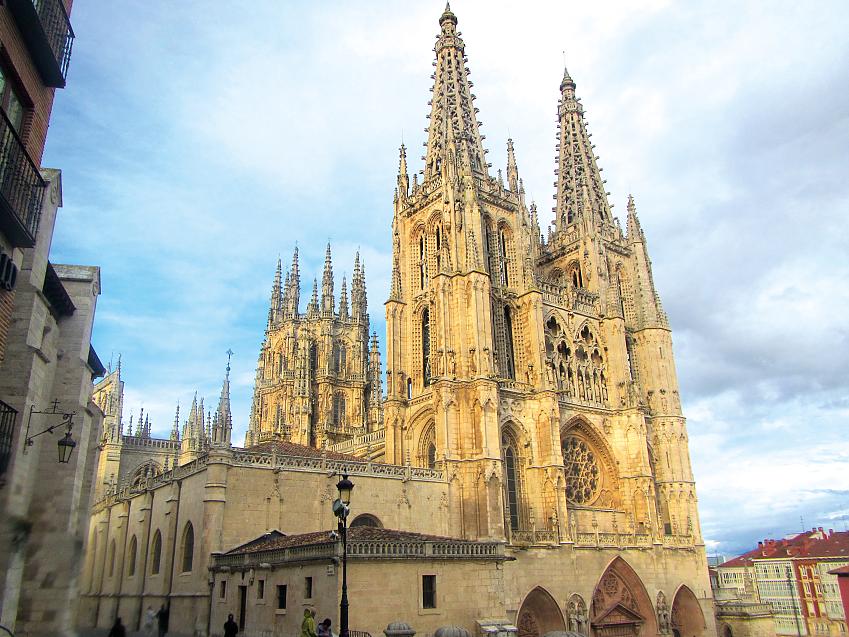 They flew into Barcelona with bikes packed into polythene bags

Route: Starting at Tarragona, we passed through Salou and the Cambrils. Then it was the Priorat vineyards and onto the greenway, Via Verde del Val del Zafán, after which we crossed from Cataluña into Aragon. There we rode through the Maestrazgo mountains, finishing near the mining town of Utrillas. The route then crossed a valley in Calamocha and went through the Parc Natural del Alto Tajo in Castilla-La Mancha. We enjoyed amazing views from Gormaz Castle in Castille y León, and of the Canyon del Río Lobos. We then rode to Salas de los Infantes. Burgos was our next province, including the famous city. We rode into Cantabria, then finally the Basque Country to reach Bilbao.

Conditions: Mild to hot throughout. The route is mostly deserted roads and doubletrack, and it’s all very scenic.

Maps/guides: All of us navigated using GPS devices from a set of tracklogs provided by Duncan, using OpenStreetMap base-maps.

Equipment: We all rode 29er mountain bikes, most with rigid forks, equipped with lightweight bikepacking bags. We all had lights. I’m glad I had: Plenty of cash, as card readers were rare. Dynamo lights, as we did not have many opportunities for recharging. Duncan broke two spokes and was fortunate to be carrying spares.

Next time I would: Plan a quieter route into Bilbao. Take time to visit the Guggenheim museum in Bilbao.

Do you have a GPX file for this ride?