When learning, Zak cycled slowly and had a volunteer to keep him on track
By claire
Wednesday, 17 January 2018

Zakaria is a 24-year-old Syrian, and before coming along to the Big Bike Revival in Edinburgh he had never cycled before. We caught up with him to hear his story and learn how the Big Bike Revival and local community group The Welcoming have helped him to discover the joys of riding a bike.

When Zakaria was growing up, neither himself nor his two brothers could ride a bike. Although Zakaria’s Dad knew how to cycle, he didn’t pass this skill on as there were no bikes in the household.

“I tried cycling once on a friend’s balcony in Syria when I was very young, less than 10 years old” Zakaria tells us. “It was a very long balcony! After I fell, I didn’t cycle since in Syria. I was afraid I might hurt myself.”

Zakaria has been in Scotland for about a year now, studying for a Master’s degree in fire safety engineering after completing a Civil Engineering Bachelor’s degree in Syria. So how did he get involved in cycling once he arrived in Edinburgh?

It seems a bit of friendly competitiveness got him started on two wheels. “I have a friend who lived in Edinburgh who knows how to cycle,” he explains. “He encouraged me to learn how to cycle and introduced me to the cycling paths. My brother has recently learnt cycling in less than ten days and that also motivated me. I wanted to compete with him a little bit.”

Things progressed quickly for Zakaria once he decided he’d like to learn. He met two attendees at an event organised by The Welcoming who voluntarily offered to teach him to cycle. They also introduced Zakaria to the Welcoming since he was new in Edinburgh. The Welcoming helps newcomers to Edinburgh to feel at home and contribute to life in Scotland. Their staff and volunteers offer support with learning English, finding jobs, making friends and understanding Scottish culture. This year the community group participated in the Big Bike Revival, offering a range of cycling activities and events for new and returning cyclists.

Attending the Big Bike Revival with The Welcoming

“I went along because I didn’t know any other Syrians in Edinburgh so I wanted to socialise and make friends,” Zakaria says. “It was the first event I attended with The Welcoming. The ladies suggested we go for a cycle and when I told them I couldn’t cycle they offered to teach me. Being a novice at cycling, we chose and went on cycling-friendly paths. After two sessions, each lasting an hour and a half, I managed to cycle.” 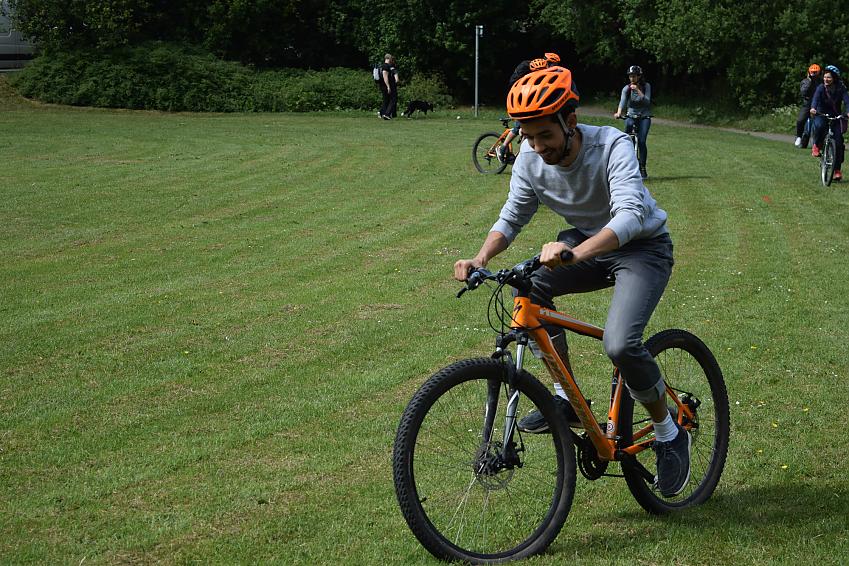 The Welcoming’s Big Bike Revival events gave Zakaria the opportunity to practise as a new cyclist, learn routes and meet new people. “I have been to two Big Bike Revival events,” he tells us. “I cycled slowly and had someone behind me to make sure I stayed on track. The events were a lot of fun and I gained more confidence. At first I was concerned that the ride would go more slowly because of me, but volunteers kept me company as they knew I was a beginner and made sure that I was okay.”

The Big Bike Revival rides saw around 20 people attend each ride, with people exploring low-traffic and off-road routes around Edinburgh. Zakaria was introduced to the Water of Leith river route by bike. He really enjoyed the connection to nature: “it was a great fun, the greenery, the water and everything. I just love nature and to explore such beautiful landscapes while cycling was incredibly amazing.”

Access to a bike would help Zakaria explore the city. The Welcoming has been working in partnership with Bikes For Refugees Scotland, and he hopes to receive a cycle to help him get around Edinburgh.

“I have learned how to ride a bike but I am not that confident riding alongside cars on the streets yet,” Zakaria says. “I don’t have a bike right now so I have not been able to get enough practice. Hopefully after I have my own bike I get to practise more and soon become confident enough to cycle along cars on the street.”

For this new rider, cycling’s benefits have hit home and Zakaria is keen to pursue his newly learned skill once he is able to own a bike of his own. “It is a good thing for people to cycle in towns and cities,” he says. “It keeps people fit and reduces carbon dioxide. While I am not yet comfortable on the road, I love the scenic cycling paths in Edinburgh and would encourage others to experience cycling in natural surroundings.”