For John Rowe, it all started with a single bike, fixed up and sold on to raise money for his daughter’s gap year. Now, thousands of bicycles and three years later, Resurrection Bikes in Harrogate is a force for good, with thanks to the Big Bike Revival.

Resurrection Bikes is a shining example of how a great idea, nurtured properly, can progress to something very special. John Rowe, the bike recycling project’s founder, first spotted information about the Big Bike Revival in CycleClips, thanks to his Cycling UK membership. Already recycling bikes for charity on a small scale, he could immediately see how being involved would give his project a boost. In the spring of 2015, Resurrection Bikes launched its first events.

John (second from right) with volunteers in 2017

“I think the first year we did ten solid days of activities with literally hundreds of people and by the end we were totally burned out.” John says. “In recent years, we’ve refined our approach.

“For example, in the first year we included all sorts of competitions and crafts from bike pieces and things, but now we don’t need to do things like that for the publicity. People know about us. We can focus fixing donated bikes, selling them on, and dispensing advice.

“Over three years we’ve really kitted ourselves out too. The first year we managed to get a gazebo for outdoor events and some portable work stands so we weren’t carrying heavy things about. We also got some signage to start directing people to us for BBR events.

“We’ve separated out our activities into stand-alone events – in our first year we ran training on mending a puncture and safety checking a bike. Now with the demand these are separate events.” 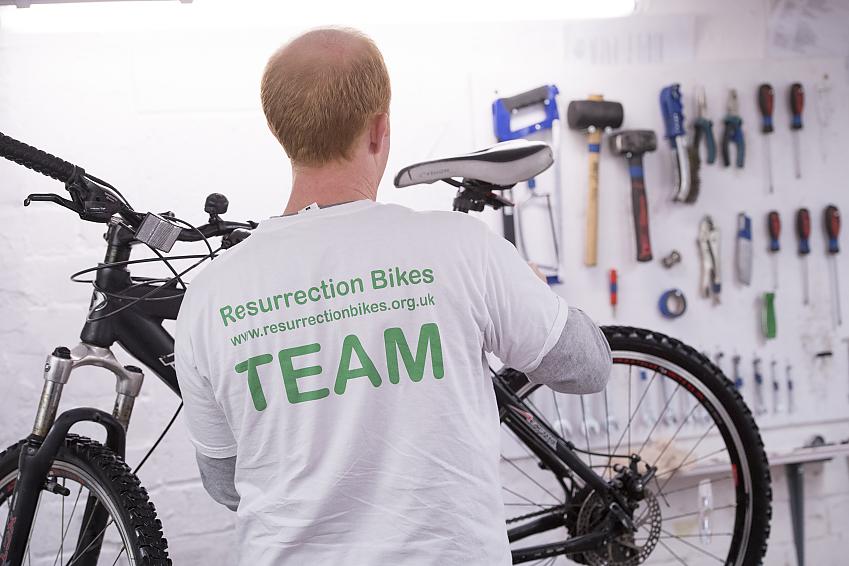 And they are events that yield results.

“Recently we had a ladies’ cycling group that had just started up, and one lady realised she was the only one of the group who knew how to fix a puncture, so she contacted us for some training,” says John.

“On the following ride the group had four punctures and they managed to fix them all – they were absolutely thrilled. It was lovely to hear; when you’re a regular cyclist and have been for years you take this stuff for granted.”

Even with winter firmly on the way, John is already looking ahead to the sunshine of next summer, and what he hopes to achieve should Resurrection Bikes be involved with the Big Bike Revival for a fourth consecutive year.

It’s connected us to so many interesting people.

“We are starting to get ideas together now,” John says. “We’d like to do a series of interconnecting events, some in the church hall, some training, and some outdoor stuff.

“When we launched in April this year Cycling UK gave us a new Raleigh Chopper bike, which in turn gave us the idea to source lots of interesting bikes for a day and let people try them out.  We even have games ideas to do on bikes.

“Another concept we have is to get back out on the local cycle path that connects Harrogate with Ripley to the north. We went out to speak to riders there in our first year with a stand sharing information about us, and it was really successful.” 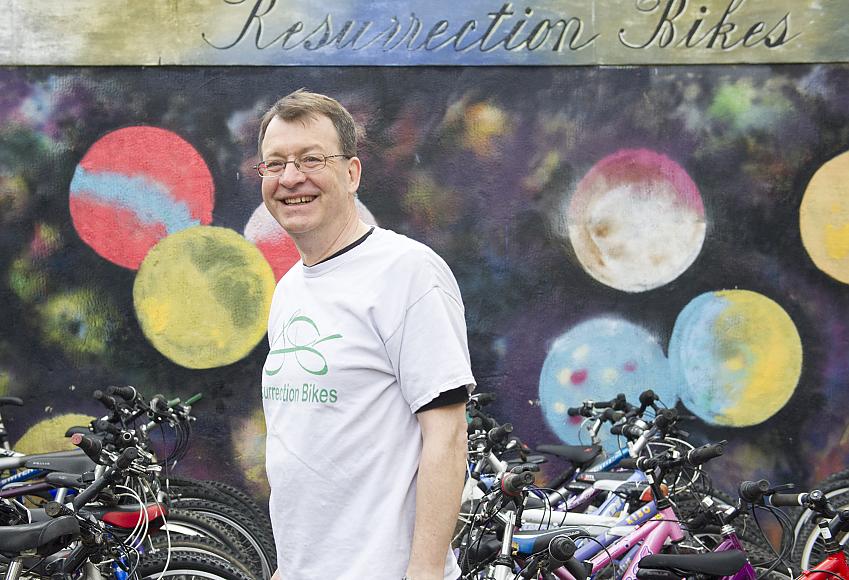 This year’s numbers are very encouraging; in 2017 so far Resurrection Bikes has received over 1000 donated bicycles, with over 600 so far successfully brought back to life. This year’s enterprise has raised over £35,000 for different charities, with the bikes going in many different directions too, from prison programs, to refugee families settled across Yorkshire.

But John isn’t too wrapped up in the numbers.

“It’s connected us to so many interesting people. We have fun and see where it goes. We aren’t target-driven, we’re just a bunch of volunteers enjoying ourselves for a good cause and seeing where it leads.”

Bereaved twin gets back on a bike, after 14 years without her cycling sister View

Video: Scotland's Big Bike Revival View
You too can champion cycling in the UK
Give your support today to help Cycling UK’s charitable work tomorrow. We double every pound you give through other sources to help change lives and communities through cycling.
Volunteer now
Join Cycling UK to help us change lives and communities through cycling
Membership gives you peace of mind insurance, discounts in cycle shops, rides & routes
Join now