Bryce, who's blind in one eye, gets back on a bike after 20 years

Bryce, who's blind in one eye, gets back on a bike after 20 years

Sight loss caused by glaucoma forced 84-year-old veteran Bryce Campbell to stop pedalling. Having fallen in love with cycling as a boy, he raced extensively and even took on Olympians in the 1970s. Now Bryce is back in the saddle with Cycling UK’s VIE Velo tandem club for people with visual impairments.

When Bryce was diagnosed with glaucoma 20 years ago, he was forced to stop cycling. In the last five years his sight has deteriorated extensively. He is now completely blind in one eye and describes the vision is his other eye as "like looking through a very dense fog."

Bryce was receiving support from the charity Scottish War Blinded when staff found out about his passion for cycling. They contacted VIE Velo, Cycling UK’s tandem cycling club for people with visual impairments in Edinburgh and the Lothians. The team were delighted to help Bryce get back into the saddle.

Bryce wasn't nervous on one of VIE Velo’s tandem bikes. Working with a sighted pilot at the front of the tandem the pair were quickly speeding along.

“It was fantastic!” says Bryce. “It was like low-level flying – I’ve always likened cycling to that. There’s nothing like it.

“There was no fear, it all just came back naturally to me.” 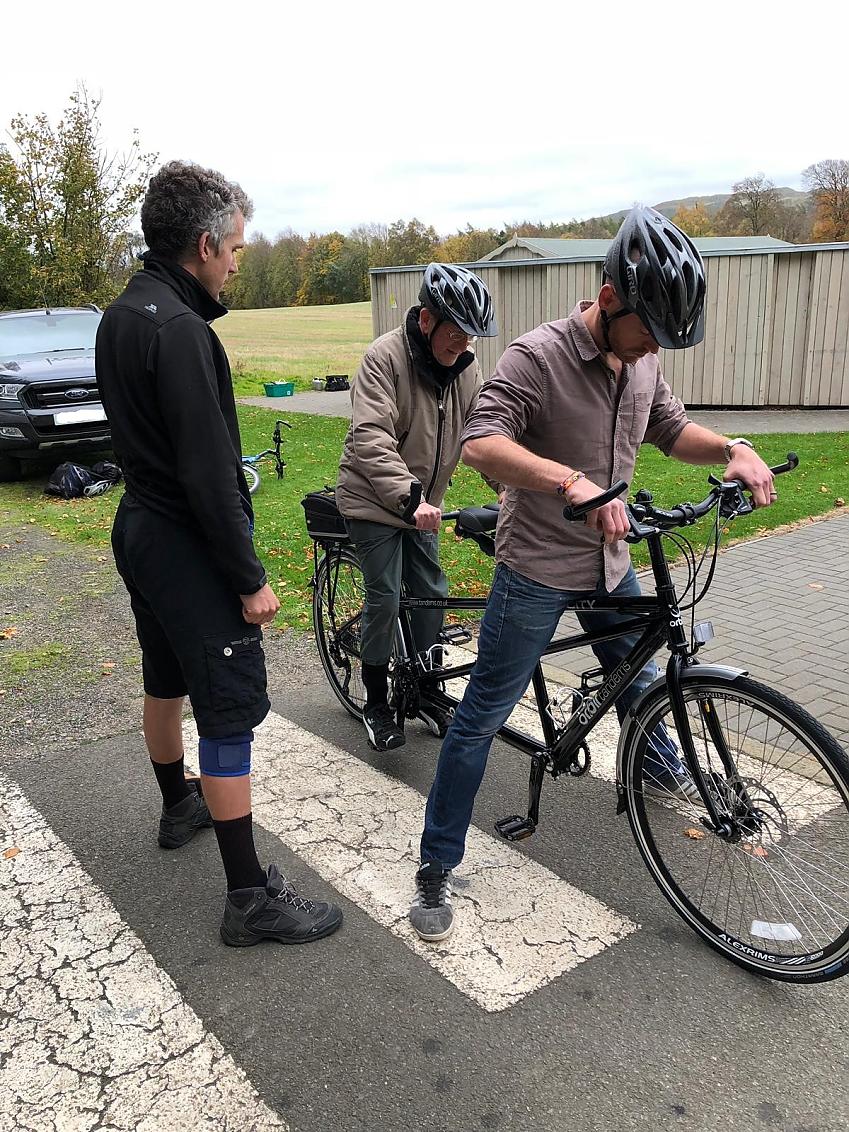 That Bryce took to the tandem so quickly is no surprise, given he is no ordinary cyclist. He has a racing pedigree and even pitted his wits against Russian Olympic cyclists when they were training in Scotland.

“I think I’ve been interested in bikes since I was two,” Bryce continued. “I’ve always loved bikes. I think I took it up as more of a sport when I was about 14.

“You name it, I did it – time trials, road racing. I even raced against the Russian Olympic Team in the 1970s.

“I like to think I could have been a champion, but I wouldn’t train that hard...I was never that dedicated, I just loved cycling and competing.”

VIE Velo is a welcoming club that provides opportunities for people with visual impairments to cycle, even if they’ve never been on a bike before. Training and confidence-building sessions are provided to visually impaired riders, called ‘stokers’, and sighted pilots alike.

The club is part of Cycling UK’s Edinburgh All-ability Bike Centre, which runs a range of activities to support people to cycle, whatever their age, ability or background.

David Glover, Cycling UK’s Senior Development Officer for the Edinburgh All-ability Bike Centre and VIE Velo, said: “It was a huge pleasure to meet Bryce and help him to regain his passion for cycling.

"It was obvious from the moment he got on the tandem that he was a very experienced cyclist who required very little encouragement to get up to speed straight away.

“At VIE Velo we support people with visual impairments to discover the joys of tandem cycling – whether they are experienced cyclists or have never ridden before. We’d encourage everyone to give it a go!”

VIE Velo are keen to hear from people in Edinburgh and the Lothians who are interested in giving tandem cycling a go, as visually impaired stokers or as sighted pilots.

No experience of tandem riding is needed, as training is provided. Pilots should already be cyclists, but stokers may not have had any cycling experience, or may not have ridden since being affected by sight loss.