Why we need the Dutch Reach in the Highway Code

Why we need the Dutch Reach in the Highway Code

As part of our series examining the proposed changes to the Highway Code, our campaigns manager, Keir Gallagher highlights why it's so important to get this simple change of habit into the Code

Help get the Dutch Reach in the Highway Code

Just over four years ago, Sam Boulton was cycling in Leicester when a car door was opened into his path, knocking him off his bike and into the path of a passing van. He died the same day – on his 26th birthday.

Thankfully, such fatalities are relatively rare, but car-dooring nonetheless poses an all too common risk to cyclists, with hundreds of collisions recorded each year, many more undoubtedly never reaching the statistics, given these are only recorded where a police officer attended the scene.

Like most people who cycle regularly, I’ve had my fair share of near-misses too – some of which could easily have resulted in a serious collision if I hadn’t been cycling well out from parked cars.

Car dooring is one of those problems which really shouldn’t exist – a quick check before exiting a vehicle will easily eliminate any risk to passing cyclists or motorcyclists – and yet time and again we see drivers and passengers swinging their doors open carelessly, and putting lives at risk. It’s virtually never malicious, but that makes it no less dangerous, and during National Road Victim Month, it’s vital that we do all we can to tackle this pervasive issue.

That’s where the Dutch Reach and the ongoing Highway Code review come in.

For those who aren’t familiar, the Dutch Reach is a simple technique which involves using the hand furthest from the car door to open it – the left hand if you’re the driver. In doing so, you automatically turn your body, helping you spot approaching cyclists. By using the opposite hand, you’re also less likely to swing the door open widely, further reducing the risk.

The idea is that this technique can quickly become a habit, meaning that even if someone’s in a rush getting out the back of a cab, or distracted by a conversation, they don’t have to actively remember to check for cyclists: if they’re in the habit of using the Dutch Reach, they’ll do so automatically.

It’s thanks to our members and supporters that we’ve got this far, but now we need your help to make sure the proposals are adopted, and the Dutch Reach makes it into the Code.

Help get the Dutch Reach in the Highway Code

Just as with the new rules on close passing, the inclusion of the Dutch Reach won’t make every driver and passenger in the country suddenly adopt the Reach. However, it will see the technique naturally integrated into driving tests and lessons, helping new drivers quickly pick up the habit.

Meanwhile, the change could also feed into the basic road safety education which all children receive at school and from their parents: most of us remember the ‘Stop – Look – Listen’ mantra of the Green Cross Code – so why shouldn’t the Dutch Reach be similarly taught from a young age?

Of course, experienced cyclists and those who have had Bikeability training will be well aware that cyclists can also do their bit to avoid car-dooring, by riding out into the road beyond the ‘car-door zone’, ensuring that they’d avoid a hastily thrown open door. 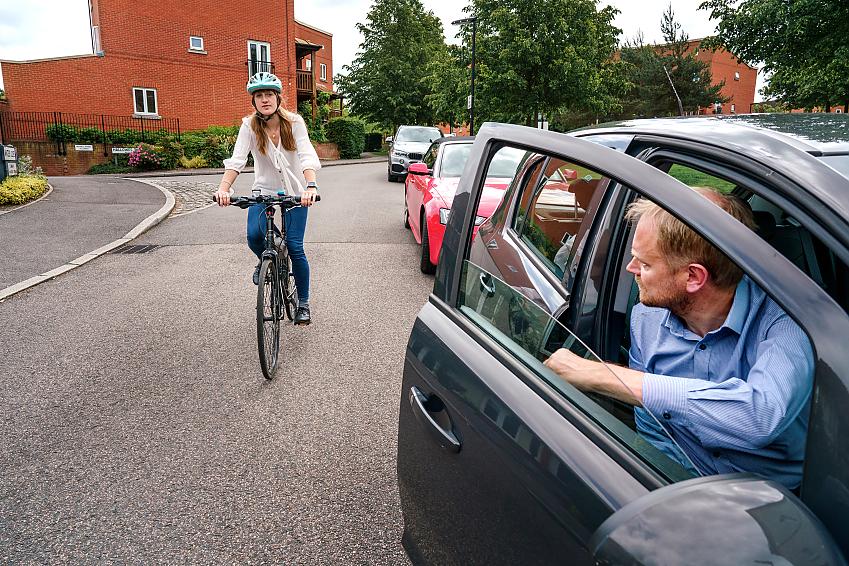 The Dutch Reach is really simple, and, if widely adopted, can make our roads safer

That’s not to suggest that it’s someone fault if they are car-doored: it’s not always possible to avoid the ‘car-door zone’, especially if you’re filtering through traffic, as a certain infamous incident involving a Government minister exemplified, and it’s the legal responsibility of a driver to ensure they don’t enable or allow a door to be opened in a manner which endangers others.

However, even where space is available to ride well out from parked cars, many drivers aren’t aware that cyclists ride in this position for their own safety, and it’s therefore also great to see that the proposed changes to the Highway Code include a reference to this, specifically telling drivers that: “Cyclists are also advised to ride at least a door’s width or 0.5m from parked cars for their own safety”.

The inclusion of the Dutch Reach in the Highway Code would represent a significant step forward in tackling this pervasive problem, alongside the range of other key changes which will make the roads safer for cycling. Please add your voice to help make sure these changes make it into the final version of the revised Highway Code.