Was it any safer out there? Reported road casualties in Great Britain, 2017

Cycling UK continues to support the UK to cycle
This remains true during this difficult period with the ongoing threat of coronavirus Covid-19
Read our latest advice on cycling
What do the latest road casualty statistics tell us? Photo - Joolze Dymond.
By Cherry Allan
Friday, 23 November 2018

Was it any safer out there? Reported road casualties in Great Britain, 2017

Each year, the Department for Transport releases a mass of statistics on the crashes and collisions reported to the police the year before. Cycling UK's Cherry Allan looks at the latest set.

Without doubt, Britain has witnessed a sizeable drop in the number of people killed or seriously injured (KSI) over the last few decades: 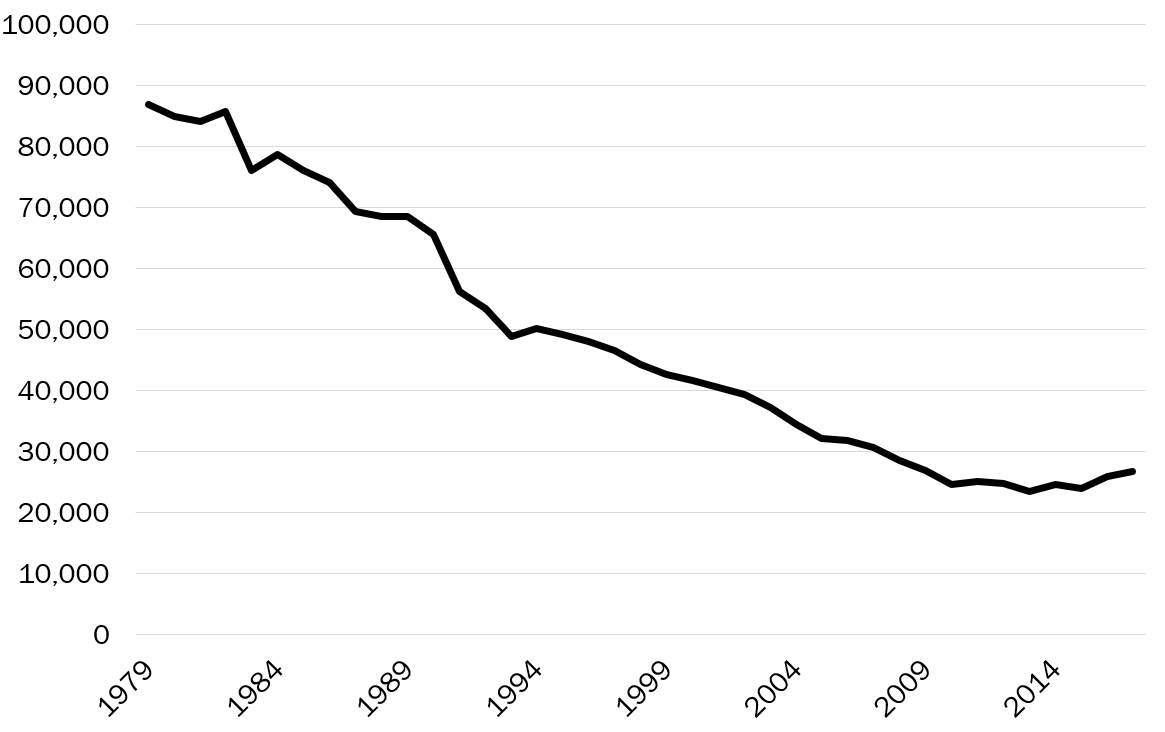 If you stop investigating the Department for Transport’s (DfT) annual data there, this trend looks very reassuring.

The evident stagnation over the last few years, however, suggests that a British version of Sweden’s ‘Vision Zero’ needs considerably more effort.

In terms of fatalities alone, there’s been no percentage change over the 2010-2014 average of 1,799, while the numbers for the last two years are curiously similar:

For cyclist fatalities in particular, the last two years are very nearly the same too: 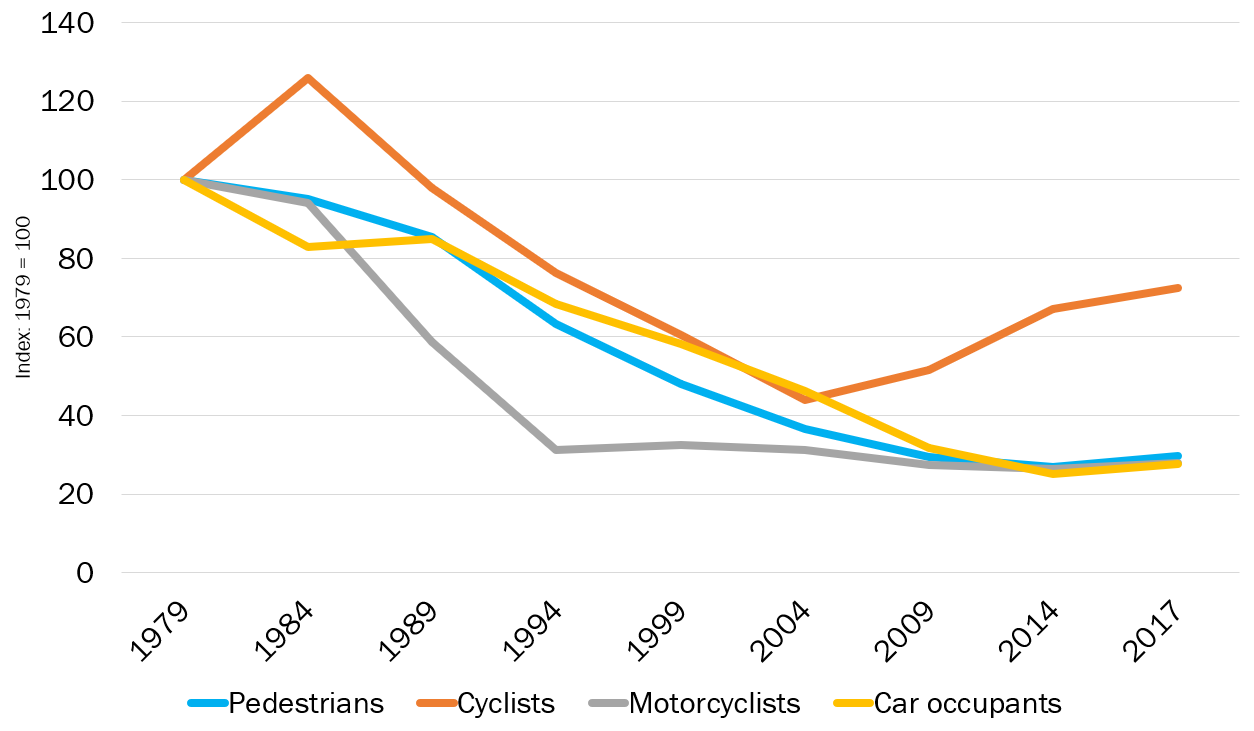 It’s worryingly evident from the chart above that cyclist KSI took a turn for the worse around ten years ago. 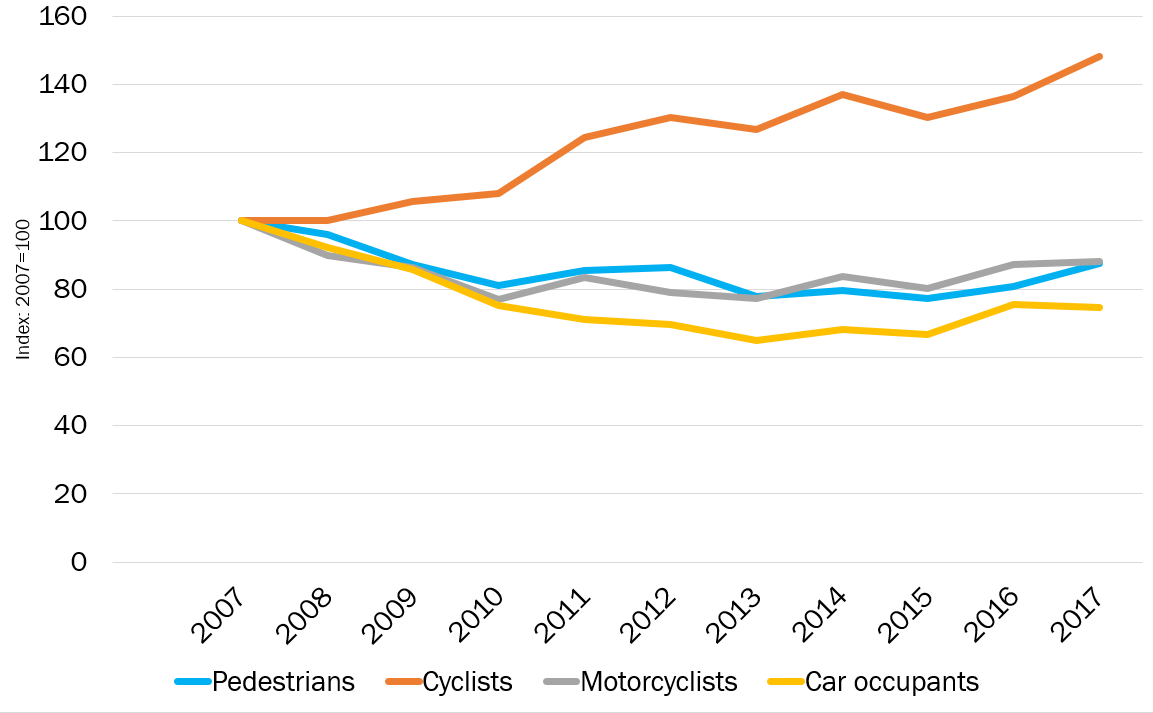 While the statistics above seem dramatic and disturbing – and there’s absolutely no denying that they are – we must bear a couple of factors in mind.

Firstly, a fair number of English police forces have adopted a new, more reliable way of recording how seriously hurt a casualty is; and, secondly, the figures quoted above represent KSIs in numbers, rather than KSIs per billion miles (rate), which is a better indicator of whether the risk of travelling by foot, bike, motorcycle or car is going up or down. An increase in cyclist casualties could, after all, simply reflect a rise in cycle use.

Let’s look at both of these factors in turn.

At the end of 2015 or the first part of 2016, over half of English police forces adopted CRASH (Collision Recording and Sharing), while the Met Police in London introduced a similar system called COPA (Case Overview Preparation Application).

These systems make it easier for the police to assess an injury’s severity accurately, and both have logged large increases in serious casualties a result: around a fifth more for CRASH in 2016, stabilising in 2017; and, for COPA, +22% in 2016 and + 58% in 2017. This is not the case for police forces who are still using their old reporting methods.

It seems very likely, therefore, that CRASH and COPA help explain why larger numbers of serious injuries for cyclists and others are now appearing in the annual figures: 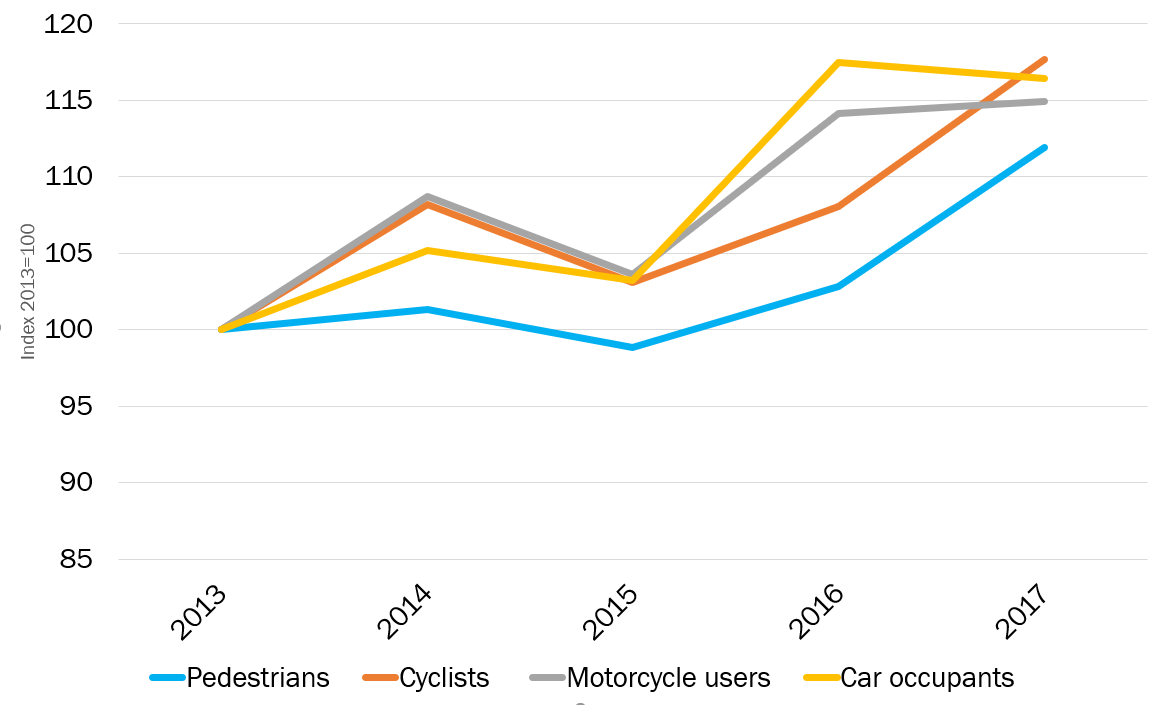 Referring to analysis it commissioned on the effect of the changes, the DfT says, “the estimated number of serious injuries in both 2016 and 2017 is similar to other years”. Stagnation, in other words.

It’s worth noting here that not every road traffic incident is reported to the police. This means that, each year, a proportion of casualties bypass STATS 19 (the forms the police use when recording a crash that’s been reported to them), and are only logged in Hospital Episode Statistics (HES). The DfT wants to make better use of HES for analysing trends, so is planning to conduct a linking exercise between them and STATS 19.

Given CRASH and COPA, we also have to be careful about making risk-per-billion miles comparisons for serious injuries between the last two years and the years before that.

For the moment, then, let’s look at the relative risks of different forms of transport per billion miles travelled. This is how KSIs look for the last five years: 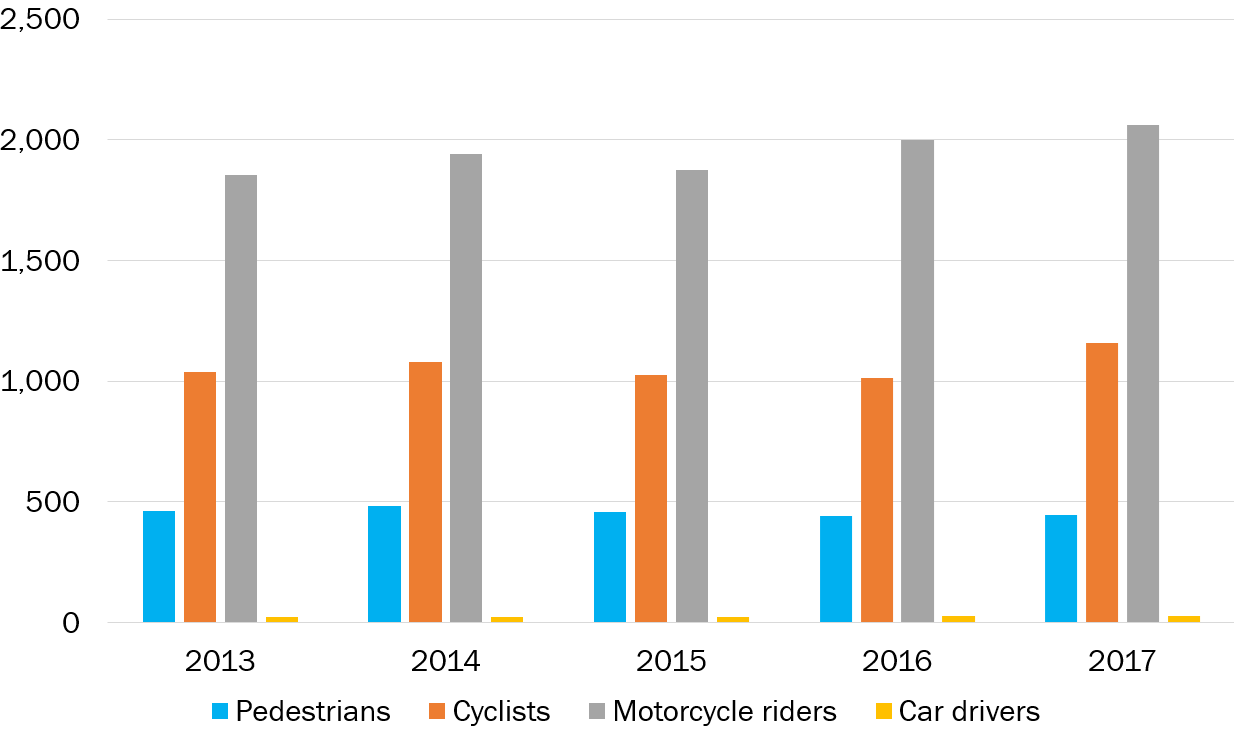 From this, it’s obvious that car drivers were at considerably less and motorcyclists at far greater KSI risk than any other road user. We can also see that cyclists’ KSI risks are greater than that of pedestrians, although it’s the other way round for fatalities alone, at least for the last four years: 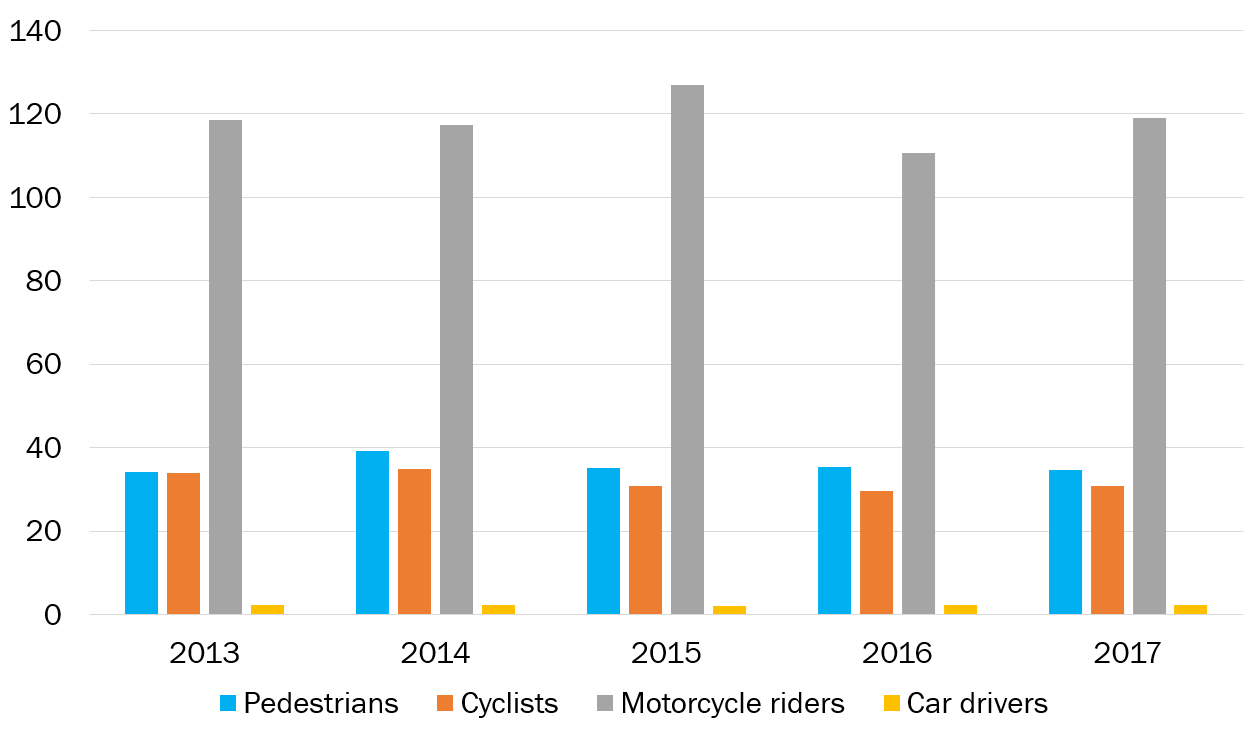 The latest statistics also tell us how many pedestrians have been hit by vehicles and whether they were slightly or seriously injured, or killed. They can’t, however, offer any insight into the details of each incident or who, if anyone, was officially considered to blame.

In 2017, the police reported that 470 pedestrians were killed in collisions. Of these, three (0.6%) were hit by cycles, meaning that 99.4% were hit by motor vehicles. This mirrors the average for the last ten years in total, while the number of pedestrians killed in collisions involving cycles per billion miles cycled in urban areas has dropped since 2013 (2.8 in 2013, 0.8 in 2017).

What’s been flagged as a concern, however, is the rising number of pedestrians hit and seriously injured by cycles over the last few years.

Certainly, if you consider the rate in the raw – i.e. how many pedestrians are hurt per billion miles cycled – it seems that, although still rare, cycles are indeed increasingly likely to be involved in incidents that cause serious injuries to pedestrians in urban areas (i.e. where they are most likely to mix densely).

Serious collisions involving pedestrians, however, have been rising for all vehicle types over the last five years, albeit by slightly less than for cycles. Again, the new reporting systems the police are using have probably affected the number of serious injuries feeding into the data too.

Irrespective of which vehicle was involved, there’s been an increase in the number of pedestrians killed or seriously injured in London too. According to Casualties in Greater London, released by Transport for London at the same time as the DfT’s stats for GB, there’s been an estimated 10% increase in KSI amongst pedestrians from 2016, and a 20% rise in fatalities (61 up to 73).

This means that pedestrians accounted for well over half (56%) of the total number of road deaths recorded in the capital in 2017.

Interestingly, the estimated 10% increase in pedestrian KSI takes account of the changes in the Met police’s reporting systems and of the introduction of online self-reporting (which makes it easier for members of the public to register collisions with them – in fact, self-reporting has shot up by 35%).

We can only speculate about why there are more reports of pedestrians being hit both in London and elsewhere; whether it’s down to changes in road user behaviour, say, easier self-reporting processes or distractions like mobile phones. Without further research, we just don’t know for sure.

We do know, though, that TfL reports “concerning increases” in the number of fatal incidents involving lorries. In 2016, 14 pedestrians died in collisions involving large goods vehicles in London, but this leapt to 22 in 2017. HGVs are a continuing threat for cyclists there too, with almost two thirds of cyclist deaths involving them over the last two years.

What’s to be done?

Road safety for vulnerable road users is, of course, a case of improving both safety itself and people’s perception of it. The latter is vital if we’re ever going to encourage more of the population to take up active, healthy travel for the sake of public health.

Cycling UK thinks that much of the solution is pretty straightforward and, back in June, we made almost 100 recommendations to the DfT in response to its Cycle Safety Review.

In this, we looked in detail at safe roads and junctions, safe road users, safe speeds, safe vehicles and safe systems management, otherwise known as the ‘safe systems’ approach.

‘Direct vision’ for HGV cabs, how to improve driving standards overall, greater priority for cyclists and pedestrians at junctions and 20 mph for urban streets are just a few of the factors we highlighted.

We also called for a comprehensive review of traffic laws to help tackle the mistakes, carelessness, recklessness and deliberately dangerous behaviour from all road users that puts everyone at risk.

The good news is that the Government has listened to what we said about the dangers of passing cyclists too closely, with transport minister Jesse Norman announcing that the DfT’s going to revise The Highway Code, and plans to tackle ‘car dooring’ by encouraging drivers to use the ‘Dutch Reach’ technique.

If this is a sign of things to come, DfT data over the next few years should morph into a set of much cheerier graphs and charts for people who already cycle and, just as importantly, for those who want to take it up.