Why not ride this amazing route with CTC on 11 August.
By JonSharpe
Thursday, 30 July 2015

On 11 August cyclists will be celebrating CTC and raising vital campaigning funds by cycling stage 39 of the Great Countrywide Tour. The route is a scenic 53 mile cycle along the coast from Rye to Brighton. CTC's Jon Sharpe, Matt Mallinder and Ian Taylor cycled the route beforehand.

There’s something special about cycling in sight of the sea. Growing up in Brighton, I took for granted the great riding on the chalk hills of the South Downs and the excursions along the coast, where waves break on pebbly beaches and white cliffs. These days I live inland, so I was looking forward to cycling by the sea again.

Being close enough to London and other cities for day-trips, the South Coast will, for many people, conjure memories of childhood paddling, melting ice creams, and fish and chips. It’s a popular destination still for such trips. Yet the South Coast has much more to offer: it’s steeped in history and has some of the best riding in the UK.

The South Coast is still popular with day-trippers, yet it's steeped in history and has some of the best riding in the UK."

My plan was to pre-ride the Rye to Brighton leg of The Countrywide Great Tour, a 64-stage event that follows the coastline of Britain. Joining me for the 65-mile journey would be CTC colleagues Matt Mallinder and Ian Taylor. The weather forecast was ideal: 20 degrees, sunny and with a tail wind – not bad for a spring day!

The small medieval town of Rye is set back a few miles from the sea. It’s in easy reach of the capital – a little over an hour from London St Pancras by train. Rye is a popular tourist destination, thanks to its citadel, cobbled streets and antique shops. But we weren’t here to take part in the Antiques Roadshow so, with the morning starting to warm up, we set out to cover the few miles to the coast.

It wasn’t long before we were ticking off the miles with the wind at our backs. Riding along past Winchelsea beach, we all started to appreciate how close we were to the whitecaps. The Great Tour route sends riders as close to the sea as it can, while avoiding as many main roads as possible.

We soon found ourselves in our first major seaside resort: Hastings. There we met Robin, John and Dave from Brighton & Hove CTC, who were our guides for the rest of the route. Hastings is famous for the Norman Conquest of 1066. Its history isn’t obvious at first glance; we rode along the promenade, past amusement arcades and bed and breakfasts, like you get in any coastal town. But if you take time to look around, you start to see things differently. With its art deco buildings, historic Norman castle, funicular cliff railways, Jerwood art gallery, and fishermen’s beach huts, Hastings has its own charm.

In the height of summer, the promenade is no doubt full of holidaymakers. In April, we were able to take advantage of a pedestrian-free cycle path that runs along this stretch. Soon we were in Bexhill, passing the statue in memory of local BMX star Richard Ball.

We were making easy progress, helped by our tail wind and the relatively flat terrain, so we stopped for a breather at the Bexhill Balustrade, which is opposite De La Warr pavilion art space.

While taking the time to soak up some warm sun, I couldn’t help but look along the coast towards Beachy Head. In all my years living on the coast, I had never been to Beachy Head. I was looking forward to visiting, despite the height we’d have to climb.

Once out of Bexhill, we ventured inland slightly and through the salt flats, taking quiet lanes to Pevensey Bay. This stretch was popular with other cyclists out enjoying the spring sunshine. Before long, we were passing through Eastbourne and riding up towards Beachy Head. No longer was I spinning freely in the big ring, instead hunting for smaller gears as we gained height. The first part of the climb was on a wide open road, but from halfway up, the road narrowed and meandered.

Near to the top, the gradient started to level off and we were met with some stunning views back over Eastbourne. I was pleased to have ridden up here, but we weren’t quite at Beachy Head yet.

Another reward for climbing up so high was the descent to Birling Gap. The road down was long and fast, but the surface wasn’t that smooth in places. Nevertheless, it was nice to let go of the brakes and coast. At Birling Gap, you can appreciate how far the cliffs have retreated. I stood next to what remained of row of terraced houses that was built in 1878. The storms of recent years have taken their toll. Looking back at old photos, it’s hard to believe there was a long row of houses here orginally; now only a handful remain.

With energy levels running low, we headed over to the sleepy village of East Dean for lunch at the Tiger Inn. Sherlock Holmes was said to have retired to the village, and there’s a blue plaque commemorating the fact on one of the cottages.

Refuelled and with extra sun block applied, we set off up the steep climb to Friston. Once at the top, we were riding along a fast, rolling road over and down to Seven Sisters Country Park and the meandering Cuckmere River.

From here, our journey took us over to Seaford, where we got up close to one of the numerous Martello Towers that were built along the South Coast during the Napoleonic War. Many have been lost or destroyed, but those that remain are being restored or converted into homes.

Keen to keep hold of our momentum, we headed onto the open rolling coast road and skirted through the small towns of Newhaven and Saltdean before dropping down to sea level and riding on the undercliff pass at Rottingdean towards Brighton. With the beach to our left and the white chalk cliffs on our right, it was only a few miles until we reached the familiar sights of Brighton’s promenade, piers and Regency architecture.

Rolling to a halt and looking around at my riding companions, all I could see were smiling faces. We were all buzzing thanks to the great riding, sea air, fantastic weather – and zero punctures or mechanicals!

Riding by the sea is something special, and I can see why people are attracted to the coast. The Countrywide Great Tour is already drawing a lot of interest, and I thoroughly recommend that you put this coastal adventure on your list of rides to do this year. It’s hard to think of a better way to spend a warm sunny day. Just don’t forget your sun block!

Ride The Great Tour with CTC

CTC has partnered with SweetSpot, organisers of the Tour of Britain, to create The Countrywide Great Tour – a 64-day, 6,800km circumnavigation of the glorious British coastline by bike.

It started on 4 July and will finish on 5 September. The Countrywide Great Tour hugs the coast as much as possible. It’s a manageable and supported cycling adventure that never leaves the sight and sound of the sea behind.

Each stage is approximately 100km and riders are able to take part in one or multiple stages (even the whole 6,800km route). Each stage is a great day out on the bike. Riders are fully supported along the route with lunch, luggage transport, bike maintenance and accommodation.

We’re inviting members to join us and fundraise for CTC specifically during two stages: Scarborough to Kingston upon Hull (2 August); and Rye to Brighton (11 August).

CTC’s Great ‘Little’ Tour will be a celebration of the wider CTC family of cyclists and will help raise funds for CTC’s cycling projects. Those fundraising for CTC will receive free entry, a CTC jersey, training advice and much more.

Book your place to ride The Great Tour for CTC.

Distance: 53 miles / 85km
Route: Rye to Brighton sticking close to the coast. Mixture of coast roads, lanes and tarmac cycle paths. Hilly in parts.
Conditions: Sunny weather, with a tail wind.
Recommended bike: Any road or touring bike will be fine.
Maps: Stage 39 of Countrywide Great Tour
I’m glad I had: Sunblock!
Next time: I would: Stay over in Brighton and do the next stage that finishes in Ryde on the Isle of Wight.

This was first published in the June/July 2015 edition of Cycle magazine. 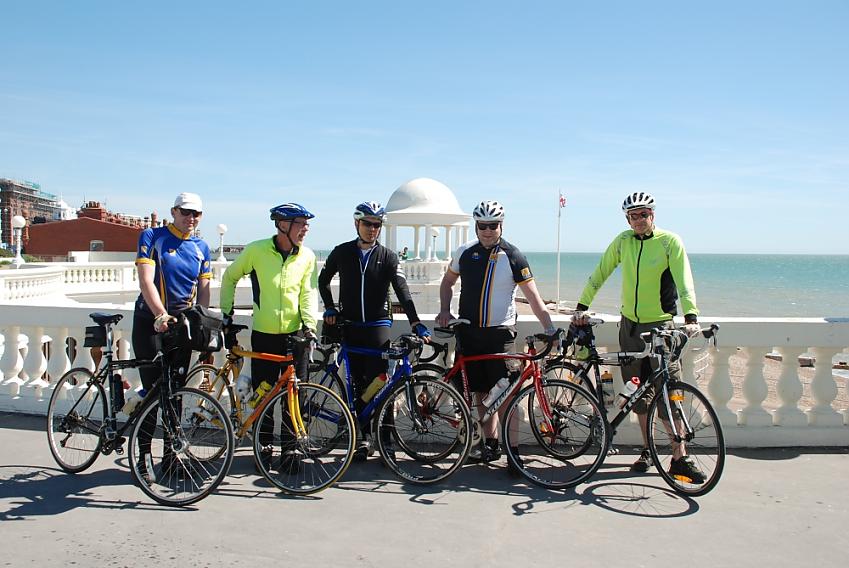