From the first announcement, we've seen action taken quite quickly, with the pedestrianisation of the Cathedral Quarter, and footpaths widened in the Linen Quarter.

A couple of weeks later came the announcement of proposed changes in Derry/Londonderry, involving widening and extending existing cycle lanes along the City’s Waterfront. Work on this expected to be completed in a matter of weeks, with more pilot schemes to be rolled out across the city.

It was then quiet for a number of weeks, and some of the measures implemented in the Cathedral Quarter and Dublin Road left a lot to be desired - signs had fallen down and cones were moved. Resurfacing on the Sydenham Bypass then came under criticism after failure to improve the existing, flawed cycle lane - mainly due to a lack of segregation. It was clear at this point that if work is to take place, it needs to be more substantial than cones and tape.

During these weeks of discontent, the Minister expressed a desire to speak to local councils and groups about what could be done in their area. We took this opportunity to set up an action so that our members could write to their local MLAs, asking them to ask the Minister for temporary infrastructure in their area. This has been extremely successful so far, with over 150 members taking part and nearly 700 emails sent. It's not to late to get involved.

Now is the time to be bold and ambitious

Last week then provided a real breakthrough when Nichola Mallon announced that ‘pop-up’ cycle lanes would be put in place throughout Belfast, on Grosvenor Road, Dublin Road, Crumlin Road and Oldpark Road. These roads are important links to the main hospitals in the city: Royal Victoria Hospital, The Mater, and The City Hospital. They are also key commuting corridors for those who work in the city.

Coupled with that, the Minister announced the Department for Infrastructure budget for 2020/21: £20m to be made available for a blue/green fund in which £4m is to be invested in Greenways. Further to this, a 20 mph speed limit scheme concerning 100 schools will be put in place, costing £2m. We have already been urging the Minister to consider the School Streets scheme used in other parts of the UK. 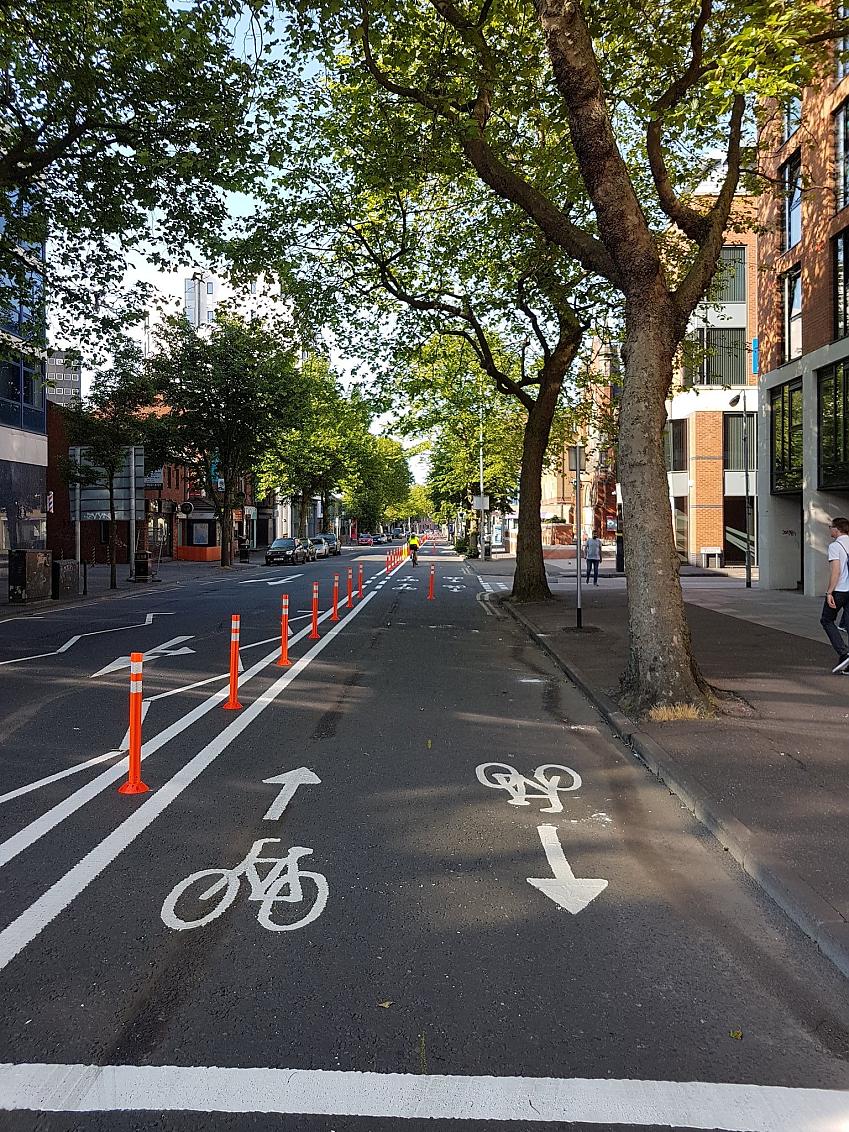 This week, the first of these cycle lanes 'popped up' in Belfast. Work started on Dublin Road over the weekend and, at the beginning of the week, we saw wands installed to segregate and protect the cycle lane with road markings drawn out as well. There has been a great reception for this, with pictures already circulating of many people using the cycle lane. We even have a video on our Twitter account - @CyclingUK_NI.

Work on Grosvenor Road has also begun, with work on Crumlin Road and Oldpark Road expected to follow in the coming weeks.

These are brilliant developments which will not only help with active travel, but also create a healthier, greener environment for our cities.

Whilst there have been no developments outside the two main cities, we are optimistic given that we know money is available and that the Minister is in contact with local councils.

In other news this week, we heard that the government in the Republic of Ireland has pledged an annual budget for cycling and walking of €360m for the next five years. To put that in to perspective, that is approximately €66 per head.

Who knows, this may encourage the Northern Ireland executive to invest more money in to cycling and walking.

How cycling can benefit businesses in Northern Ireland View