Road Safety Week is a good time to focus on the need for renewed road safety efforts in Scotland. Our campaigns and policy manager for Scotland, Jim Densham, provides his thoughts on why it’s so important to respond to the consultation on the new Road Safety Framework

This week is Road Safety Week run by Brake. The theme this year is ‘No Need to Speed’ and as Brake say, "It’s a reminder to everyone of how the speed they travel affects other people".

Brake explains that "Every time we’re on the road, we need to consider what speed is appropriate to keep ourselves and others safe". I’m a driver as well as a cyclist, and it’s good to remember that sometimes the appropriate speed is not the one on the speed limit sign.

Likewise, when riding a bike, it’s not always appropriate to ride as fast as I can – it depends on location, road conditions and the people around me.

In 2020 during lockdown, we’ve seen speeds on quieter roads at both ends of the spectrum. Some people used quieter roads to drive at shockingly high speed, whilst many people and families made the most of quieter and safer streets to cycle and walk in greater safety.

With more people enjoying walking and cycling, many councils in Scotland used Spaces for People funding to install temporary speed reductions. Hundreds of roads across the Borders, West Lothian, East Lothian, Perth & Kinross and Aberdeenshire have been changed to 20mph zones. Why? Because with more people cycling and walking, and needing to distance safely, the 30mph zones were no longer appropriate, but 20mph was.

We want councils to give these new 20mph zones a lengthy test and to monitor them to find out the impact before decisions are made about whether to go back to the old limits. We hope that residents and councillors will see that 20mph is the appropriate speed for these roads for the long-term, even after the pandemic.

Cycling UK wants to see 20mph made the default for all residential streets in Scotland. Surveys consistently show that fast, busy traffic deters people from riding, as it makes them feel less safe. 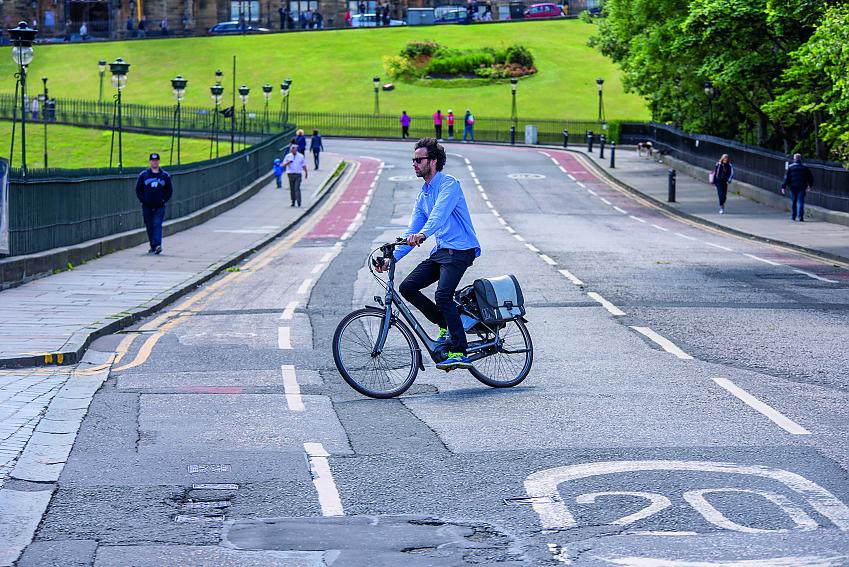 A 20mph zone in Edinburgh. Cycling UK wants to see 20mph made the default for all residential streets in Scotland.

It is very difficult to write about the deaths of cyclists on our roads, and to know when it is appropriate to do so. However, I don’t feel I can write an article about road safety without mentioning the tragic deaths of three people who were riding their bikes on Scotland’s roads in recent weeks. One death is too many but three in just nine days is absolutely devastating. Our thoughts are with the families and friends of those killed.

We don’t know the details of each collision and it’s wrong to speculate before investigations are completed. What we do know is that each collision was different and in these situations a number of factors and road safety failings can combine , causing terrible consequences.

Sixteen-year-old Harley Smith from Grangemouth was killed as a result of a collision with a car in Falkirk on 6 November.

Colin McCourt from Dumbarton was killed in a collision with a car on the busy A814, half a mile west of Cardross. Colin died on 10 November and reports say a 44-year-old man was arrested in connection with road traffic offences.

The Scottish Government is currently consulting on a new Road Safety Framework to 2030, with a proposed target to have the best road safety record in the world by 2030 and zero deaths by 2050. The framework includes five objectives in a ‘safe system’ approach - safe speed, safe roads and roadsides, safe vehicles, safe road use, and post-crash response. This comprehensive approach recognises that effort is needed in all areas if we are to have a lasting legacy of safer roads and zero deaths. However, it will take huge effort and a focus on the detail to achieve this, and unfortunately the framework is currently lacking detailed commitments.

The recent deaths of people on our roads is a reminder that we need a renewed focus and urgent action, to address road safety if Scotland is to meet these challenging targets. This must be a wake-up call for government to use the new Road Safety Framework to commit to many more practical steps that they and other bodies, such as Police Scotland, must take to make our roads safer - especially for cyclists and other vulnerable road users.

You can read more about the draft framework and our priorities for action in my recent blog. We have also provided a summary guide to the framework and consultation, to help you write your own response. I urge you to respond and have your say on road safety issues that matter to you. The consultation closes on 1 December.

Road safety must target most dangerous, not the least safe View