In March 2017, Cycling UK launched its #TooCloseForComfort fundraising campaign. While ostensibly its goal was to give every UK police force a 'close pass' mat, the real driving force was to make the roads safer for cycling. Cycling UK’s Sam Jones reports.

The germ of #TooCloseForComfort campaign began in Birmingham with two officers from West Midlands Police, PCs Steve Hudson and Mark Hodson. We supported it from the very first, calling it the “best cyclist road safety initiative ever”. Simply by sending plain clothes officers out on bikes, and pulling over drivers who passed too close, West Midlands Police began an education and enforcement action which changed driver behaviour overnight and saw a reduction in reported close passes by 50 per cent.

It’s probably fair to say that most drivers who overtake too closely do so more through ignorance of the danger than malice. Understanding this, the force began educating the drivers through the means of a ‘close pass’ mat on how to overtake cyclists safely.

A number of officers from across the UK showed real interest in West Midlands’ activity, and Cycling UK decided that a close pass mat for every police force would help provide the right nudge and incentive to start setting up their own operations.

We therefore launched our #TooCloseForComfort fundraising campaign, and in less than 48 hours, we had achieved our £12,000 target on Kickstarter. By the end of April, thanks to our 970 backers we saw a total of £14,568 pledged, which we've used to fund free mats for the forces who wanted one as well.

While fundraising is never easy, the hard work was still ahead, as we began seeking to find the right officers to speak to at the 45 forces across England, Northern Ireland, Scotland and Wales, and then convince them all of the value of running a close pass operation.

Buoyed by both the public interest and the enthusiasm exhibited by several forces, it was perhaps a bit ambitious to think that we would be able to easily build a list for 45 forces each willing to take a mat and run a campaign to help make cycling safer. As spring started coming to a close, and many forces keen to begin operations, we instructed our printers to roll out the first tranche of mats for the 33 forces (see chart below) that had agreed to run close pass operations using Cycling UK’s close pass mats. Thirty-one of these forces had their mats delivered on 16 June, while Suffolk and Norfolk had their mats soon after.

Only four forces said “No, thanks”. Two of these are the London-based forces of the Metropolitan and City of London. The Met has plans to run close pass initiatives that will not require a mat, whilst the enforcement issues in the City of London require a different approach from the force.

One, Lancashire, had already ordered its own mat for operations and did not require another. The fourth, Derbyshire, while initially claiming they did not have a close pass problem, could be changing its tune, in which case we’ll be delighted to share a mat with them.

There are still seven forces we’re trying to reach and get a definitive answer – so in mat delivery terms our work is not done. We’re hoping peer pressure from the 34 forces who are running operations across the summer will persuade the rest to reach out and start taking close passes seriously too.

One of the forces yet to claim a free mat is Northumbria, which launched Operation Cadence in March, a campaign that centred on cyclists submitting video footage. Unfortunately, despite the warm welcome, this operation ran for only a matter of weeks. While we could be cynical and suppose that Northumbria took the positive PR and stopped consequently, we’re optimistic this is not the case and all they need is a little nudge.

While we’ve been successful in sending three mats out to help Police Service Northern Ireland cover Northern Ireland, we’ve had to adapt our tack in Scotland where similarly there is only one force, Police Scotland, to cover the whole area. Currently they have their own mat, but that’s in Edinburgh and we’d like to see close passing taken seriously throughout the whole of the country. We’re therefore going to be offering our mats to Road Safety Partnerships operating from the Borders to Cape Wrath, and have already started with the Fife Community Safety Partnership who wanted a mat slightly closer to home!

The combination of both police and public support for this initiative has been quite incredible. It’s always easy to slam forces for not taking cycling concerns seriously, but I’ve been speaking with officers who are very much onside, see the need for such work, and are doing their utmost to convince their seniors of the need for close pass ops under very straitened budgetary circumstances.

It’s probably fair to say that most drivers who overtake cyclists too closely do so more through ignorance of the danger rather than malice.

We might wish it otherwise, but a change of culture does not happen overnight. Still, we’re seeing the green shoots of change, and witnessing a growing sense of community among the police in the need to tackle close passing, as well as taking wider cycling safety concerns seriously.

We’re also witnessing some truly impressive work unveiled within the forces, such as Gloucestershire Road Safety Partnership. This partnership has produced one of the best road safety documents to engage with both people who drive and who cycle that Cycling UK staff have seen. It’s not perfect, but it’s very good in both terms of tone and content. Nearly every force we’ve shared this document with has realised its value and are looking to produce similar. It feels like change is afoot – and it could not have been achieved without Cycling UK members and supporters who backed our #TooCloseForComfort campaign.

We’re going to continue working with all of the forces, looking to share best practice and learnings later this year.

Here’s to a summer of safer cycling! 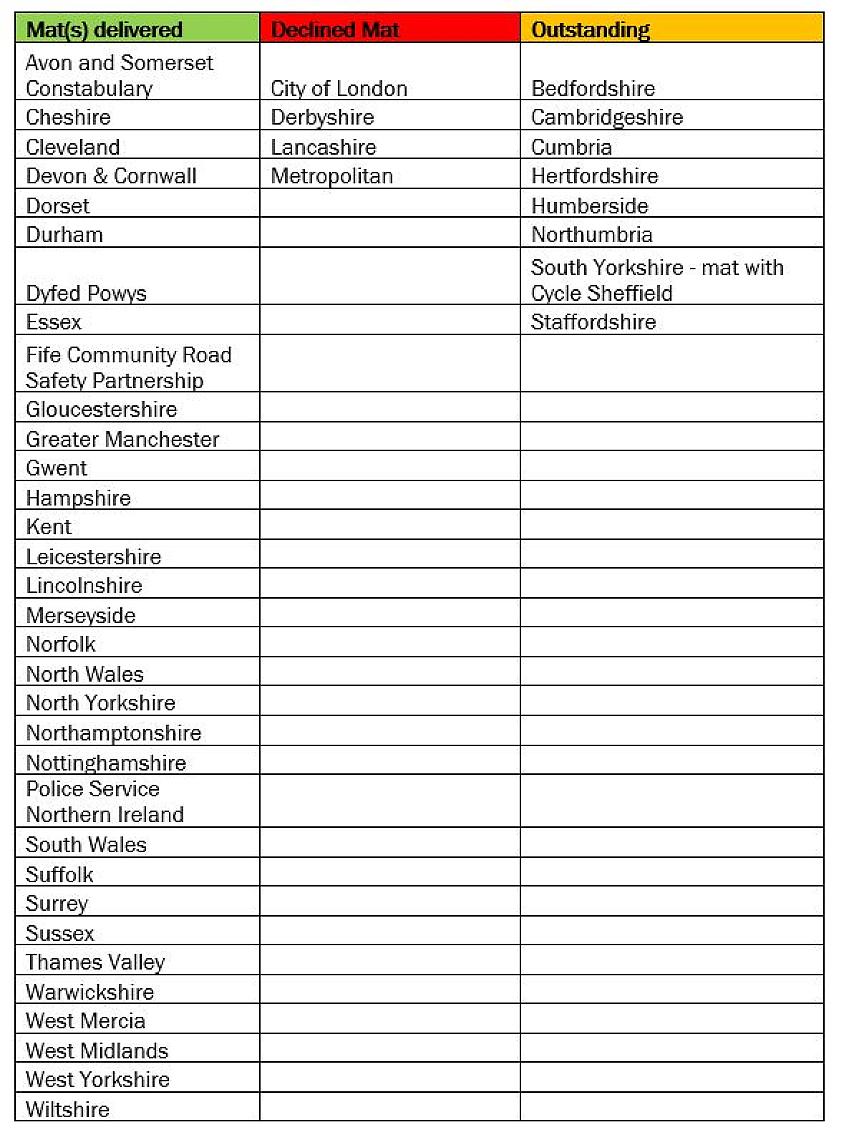 The police are mainly about

The police are mainly about law enforcement....... perhaps, at some time in the future, the "education" of drivers regarding this particular aspect of cyclists safety could also be directed at the "teachers"..... driving instructors. Input at the learning stage may instill in prospective drivers a more considered approach when overtaking cyclists.

The local nature of driving schools allows for many possibilities in format and raising awareness It, also, allows opportunities for funding which may not apply at a national level.

This is a wonderful

This is a wonderful initiative, really good news to see it is gaining some ground.

However, I am struck by a very pronounced feeling, as Samuel is above, that it would be better that this education initiative was taught at the new driver stage as a part of the driving test. I also agree with Samuel that the police are not the ideal teachers; they are the stick rather than the carrot (sorry that the metaphor doesn't entirely work!!) and it is understandable, though not excusable, that they are reluctant in some cases to get involved in this.

Would a next development stage for this campaign be to start to work through driving schools, driving instructors and the Dept for Transport (or whoever is the responsible ministry) to have it taught to the new driver?

Would be interesting to hear

Would be interesting to hear more about what exactly the police forces are doing with the mat. So while Thames Valley here in Oxford seem to have accepted such a mat, all I heard them doing with it so far was educating pedestrians (!) in Oxford city centre with it. I have not heard anything about them running operation aimed at educating drivers in the situation they have done a violation (as the West Midlands police is doing it). We need actual addressing dangerous drivers, not general "be nice, share the road" type stalls with free ballons on a street party.