The risk of serious cycle injuries is increasing: Space for Cycling needed

Cycling UK continues to support the UK to cycle
This remains true during this difficult period with the ongoing threat of coronavirus Covid-19
Read our latest advice on cycling
By Roger Geffen
Friday, 26 September 2014

The risk of serious cycle injuries is increasing: Space for Cycling needed

With the Government's long-overdue 'Cycling and Walking Delivery Plan' still awaited, new Government figures show that, however you measure it, the risk of serious cycle injuries is increasing. The Government must act urgently to reverse this trend.

This year though it has also provided a handy summary of cycle safety statistics.  Overall, it's not good news.

To be fair, the analysts at the Department for Transport (DfT) have taken care to explain that you cannot assess trends in cycle safety simply by looking at cyclist casualty numbers.  You have to relate these to changes in cycle use (and the fact that DfT has recognised the need to do this is a small victory for CTC's Safety in numbers campaign).

If cycle casualties have gone up a bit, but cycle use has gone up far more steeply, then the risk of cycling has reduced.  DfT figures show that this is exactly what was happening in the first part of the 'noughties' (2000-05).  Then it seems things started to go wrong. And it's not clear why - or even by how much.

Working out how much worse have become is difficult because of real problems getting reliable information on changes in cycle use. (This becomes an even bigger problem for measuring local trends, but this is a GB-wide report, so that need not concern us for present purposes). 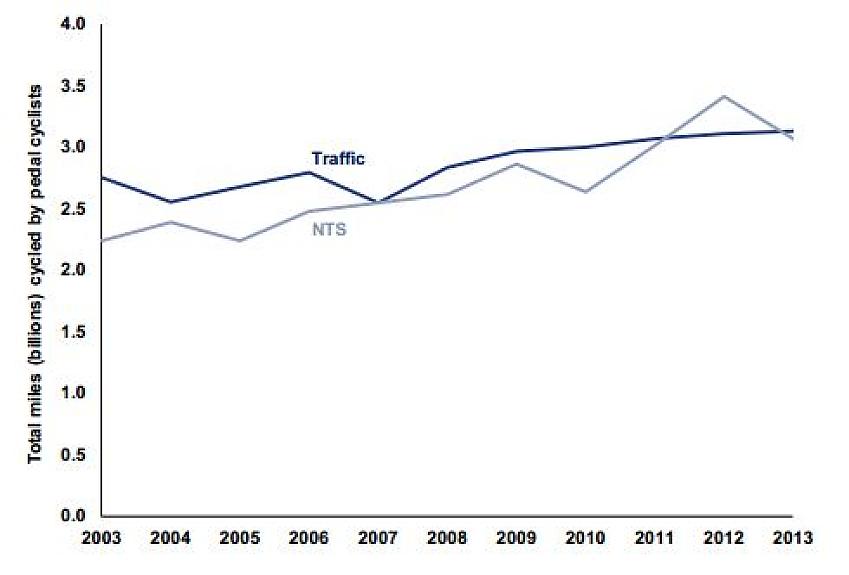 The cycle safety statistics report uses two different measures of cycle use.  One is traffic count data (which produce these figures for cycle traffic going back to 1949), taken at a (hopefully) representative selection of locations on roads of different types around the country. The other is the National Travel Survey (NTS), whose data comes from individuals compiling travel diaries. It therefore provides information about the purpose and length of journeys, and the characteristics of the people making them, which cannot be obtained from the traffic census.  However, it has a much smaller sample size.  So, for minority forms of transport (e.g. cycling), fluctuations may be statistical blips rather than real trends - especially if you try using the data at the local level.

Unfortunately, the data on recent trends in cycle use from these two sources don't match up terribly well. The traffic count data suggests that cycle use in 2013 was 13% higher than the 2005-09 average, whereas the NTS data suggests it was 20% higher. (Note also that, in 5 out of  these 10 years, the two data sources were trending in the opposite direction - i.e. if one was going up, the other was going down!)

Over this period, the numbers of cyclist casualties of all severities (slight, serious and fatal) have all increased, and by more than the increase in cycle use.  Oddly, it is serious injuries (i.e. the middle category) which have risen most steeply: by 27% since 2006. If we use the traffic count data to measure cycle use, this has gone up by 11%.  However that still means that the cyclists' serious injury rate (i.e. the risk per mile travelled) has gone up by 18%. 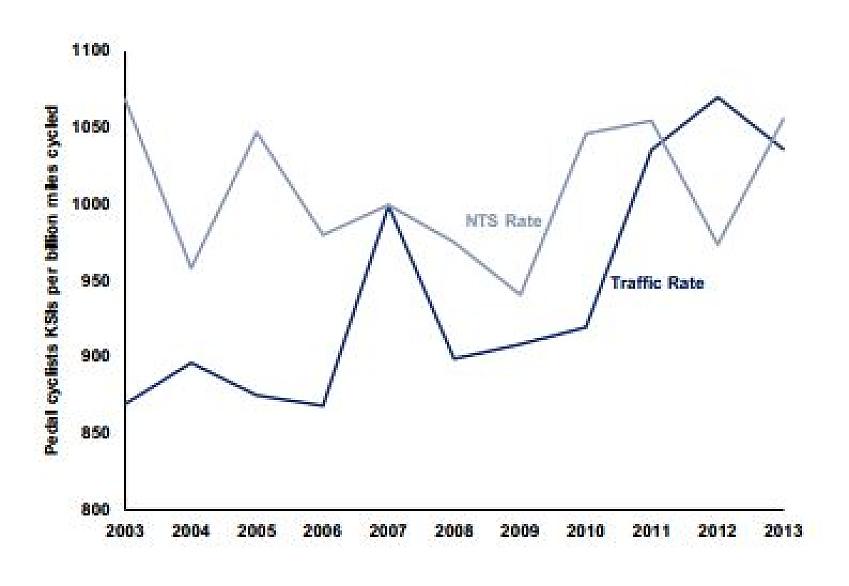 Why is this happening?

The big question is, why? There isn't an obvious answer. However I can't help suspecting that may be related, at least in part, to the fall in roads police officer numbers since 2005 - they are around 29% lower now than they were then. Investing in roads policing is a highly effective way of maintaining road safety.  If road police resources are cut, it appears that pedestrians and cyclists end up paying a disproportionate price. 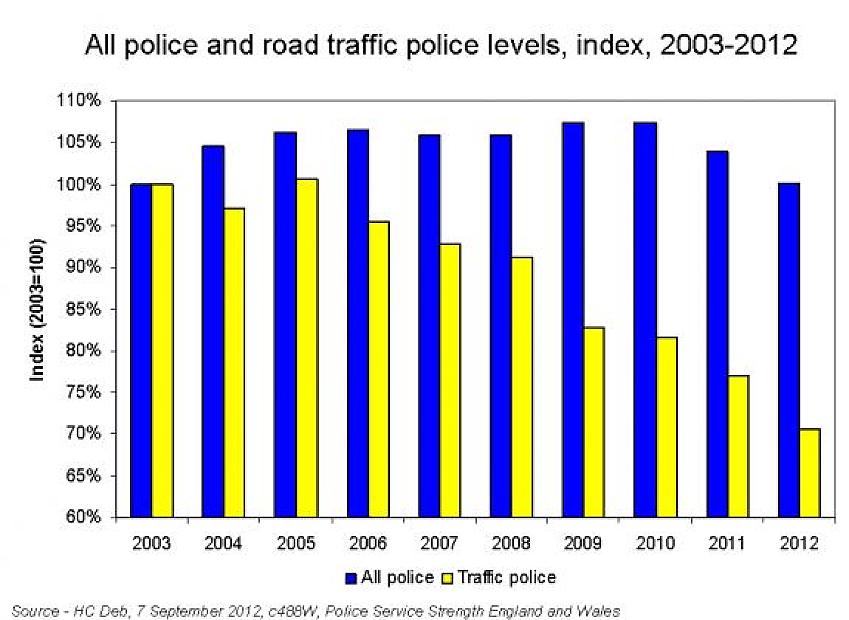 Does this disprove the 'safety in numbers' theory?

The 'safety in numbers' (SiN) theory, strongly backed by CTC based on international and UK-based evidence (some of it produced by CTC), suggests that there is a link between high levels of cycle use and good cycle safety: the more cyclists there are, the safer it is to cycle.  It is often suggested that this could be because more cyclists on the roads improves drivers' awareness of cyclists.  But it could also be that, with increased cycle use, the drivers themselves are more likely to also cycle, and to understand what it's like to be on the other side of the windscreen.

However CTC has always recognised that the causal relationship could also work the other way.  In other words, the SiN relationship could also be because people are more likely to cycle in places with safe cycling conditions.  Indeed there might wall be a two-way relationship at work, involving all of the above factors.  They could even be mutually reinforcing: increased cycle use may also strengthen the "cycling vote", and hence the level of political will to invest in improved cycle conditions.

SiN theory has at times been portrayed as implying that you can improve cyclists' safety simply by increasing cycle use - and that you therefore don't need to work on improving cycling conditions.  Moreover, this utterly distorted version of SiN theory has been wrongly attributed to CTC by various commentators. Just to be clear, we have never said, believed or implied this, and have always dismissed it as nonsense.

What we have said all along though is that more and safer cycle use CAN AND SHOULD go hand in hand (i.e. not that they necessarily will).  We also said that, to make sure they actually DO go hand in hand, action must be taken to tackle the actual and perceived dangers which deter people from cycling.  We identified those deterrents as being traffic volumes and speeds, hostile roads and junctions, bad driving and lorries.

In the 28 years up to 2005, cycle safety trends appeared to follow the SiN theory very neatly.  In 25 of those 28 years, cycle use and the various cyclist casualty rates went in opposite directions - in other words, if cycle use went up, the casualty rates went down, and vice versa.  It is only since 2006 that the relationship appears to have broken down, particularly for those killed and seriously injured (the KSI rate). 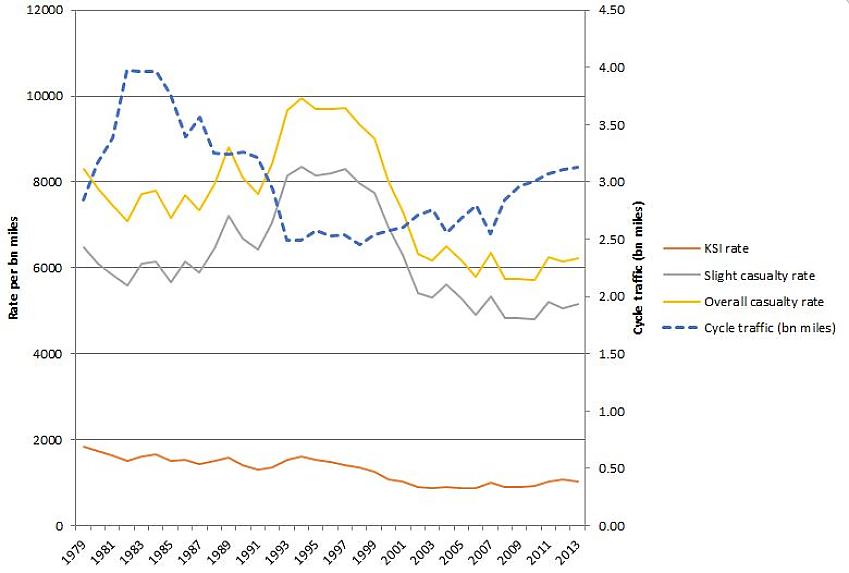 The fact that this has happened while roads police officer numbers have been declining may not be a coincidence.  However this too is a causal relationship that would be hard to prove.

It remains the case that there is ample international and UK-based evidence to show that more and safer cycling can, and should, go hand in hand. However we need Space for Cycling (i.e. low traffic volumes and speeds and/or good cycling infrastructure), Road Justice (i.e. strengthened road traffic law and enforcement) and action on lorry safety to ensure that they do.

Safety in Numbers almost certainly does work, but you need the "numbers" to be sufficiently large almost all of the time. I would say that you need modal share for cycling to be 33% or more before the effect would be noticeable. Only then is cycling "normal", and only then is it likely that most car drivers also cycle in a typical week.

Safety in Numbers is one of many positive outcomes of mass cycling, but can never be a a route to achieving it. Until we see sustainable safety being implemented on our roads and streets we can most probably expect to see rates of injuries to, and deaths of, people on bicycles going up as more people switch from motoring. Unless our politicians get building cycleways soon, it's going to hurt.