Thousands of people have been asking their councils for pop up cycle lanes and to make space available for people to walk and cycle. Head of Campaigns Duncan Dollimore looks at the tools available to help you help your council to do it right.

We’ve been campaigning for the last two months for more separated space to enable people to walk and cycle whilst maintaining social distance.

To help people engage with their council, and let them know where pop up cycle lanes, wider pavements and other temporary infrastructure measure are needed, we’ve embedded the Widen My Path map on our web page.

You can also see what (if anything) your council’s doing on our active travel intervention map, and in England use the Rapid Cycling Prioritisation Tool to help identify where cycle lanes might be most needed.

To help you with these maps and tools, we’ve set our some questions and answers to explain how they work, how they can help, and what you can do to engage with your council and press for more space for social distancing. 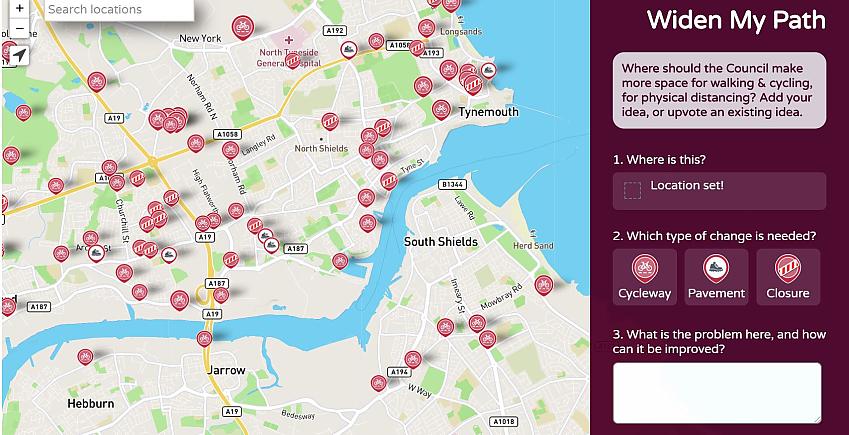 How can I let my local authority know what specific pop up cycle lanes and interventions are needed and where?

You can email your councillor and the leader of your council via our online campaign action and edit the template emails to include your suggestions. It’s much better however if you can show them what’s needed and where on a map.

CycleStreets have created the Widen My Path map which they’ve allowed us to embed on our website. All you need to do is zoom in on the map and click to select a location. You can then select what type of intervention is needed and add your comments. Once you’ve done that, you can just click to use our editable template email and let your council know you’ve done it, with a link to Widen My Path. Telling them you’ve done it reduces the risk that great suggestions go onto a map which the council don’t look at or consider.

If you’re making suggestions about measures needed in England, you can also click on a data field at the bottom of the Widen My Path map to ‘Show Rapid Cycle Prioritisation Tool suggestions’, which may help you with some ideas.

What is the Rapid Cycle Prioritisation Tool? How can it help identify where cycle lanes are needed?

The Rapid Cycle Prioritisation Tool helps identify promising locations for new cycleways in England. It’s limited to England currently, because the team at the Institute for Transport Studies in Leeds who developed it only had access to data from England.

If you click on the data field at the bottom of the Widen My Path map to ‘Show Rapid Cycle Prioritisation Tool suggestions’, and then zoom in and click on a location on the map, you can see the ‘top ranked new cycleways’ identified by the tool shown in red. Click again on any red line and you’ll see more information about the suggested route including the road width and route length. 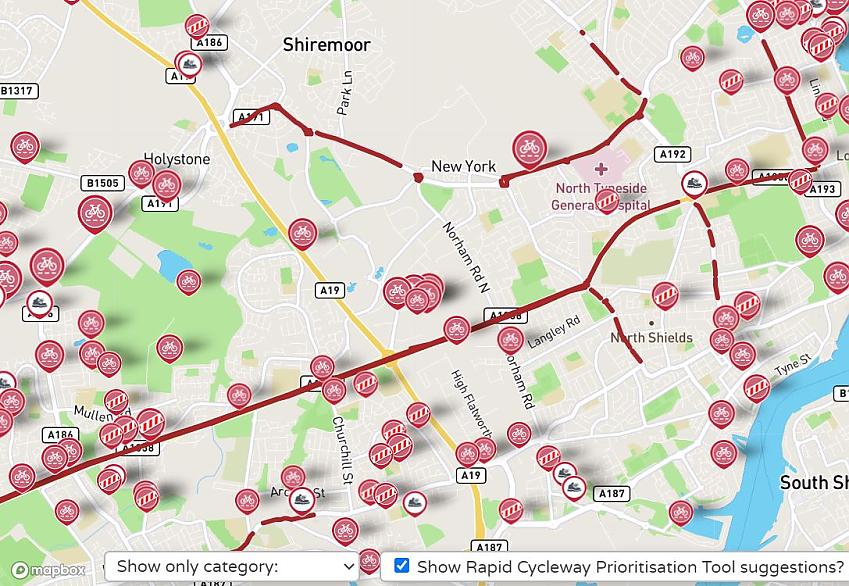 The Rapid Cycle Prioritisation Tool identifies priority locations for new cycleways, ranking roads by their ‘cycling potential’ estimated using the Propensity to Cycle Tool. This represents the estimated number of cycling trips along this road travelling to or from work or school assuming the Government’s aim to double cycling in England by 2025 is met.

The ‘top ranked new cycleways’ are the roads with the highest cycling potential which also have spare space, because they’re either wide or have two or more road lanes in one direction. As the developers of Rapid Cycle Prioritisation Tool acknowledge, no model or tool is perfect, but some are helpful. If you’re thinking about where cycle lanes could make a difference where you live, looking at the map to see which  routes the Rapid Cycle Prioritisation Tool identifies as having the most potential for work and school cycle journeys can be a useful compliment to local knowledge.

If you’re using Widen My Path and click at the bottom of the map to view the RCPT suggestions, you’ll only see the top ranked new cycleways, which probably won’t knit together to form a cohesive network. Clicking on the ‘more information’ button in the bottom right hand corner of the map however takes you to the RCPT website, where you can view additional mapping layers, including existing cycleways shown in green and the ‘cohesive network’ shown in light purple on the map.

The cohesive network layer shows what a network for cycling might look like if a wider range of interventions, such as closing roads to motorised traffic and creating one-way systems, was considered. Unlike the ‘top ranked new cycleways’ layer, the cohesive network comprises all of the major high cycle potential corridors, including sections where the roads are narrower.

The top ranked cycleways shown on Widen My Path are essentially routes on wide roads where there’s potential for new cycleways, whereas the cohesive network layer takes into account interventions other than installing a cycle lane, to hopefully create a network. It isn’t intended to show exactly what the network should be, but rather what a potential network might look like, which can help if you’re adding your local knowledge to make suggestions to your council.

What are the limitations of the Rapid Cycle Prioritisation Tool?

RCPT uses road network data from 2017. That means that recent changes to the network won’t be captured or reflected in the suggestions made. Similarly, the PCT uses data from the 2011 Census and 2011 National School Census to estimate cycling potential, which means that the potential increased cycling journeys might be underestimated in areas with new housing developments.

The results for the ‘top ranked new cycleways’ don’t identify routes under 500m with multiple changes of road name, or short routes (under 500m) linking up existing cycleways. To address this limitation, RCPT includes results labelled ‘spare lane(s)’ and ‘estimated width >10m’ which plug these gaps. These layers are hidden by default but can be found by clicking the ‘layer’ button in the top left corner of the map.

The RCPT web page includes further information about what the tool can do and it’s limitations, but the key point to remember is that it’s been designed to complement local knowledge and stakeholder engagement, not replace it.

Are there other mapping and engagement tools I can use to contact my local authority?

Some councils already have interactive maps or engagement tools on their websites, many via Commonplace. You can check here to see if your council is using Commonplace to engage with residents, or on your council’s website to see if they have an ongoing consultation or tool to enable people to comment on what’s needed and where. Widen My Path can be used throughout the UK however, whether or not your local authority has any other engagement tool, and using this via our website allows you to simultaneously contact your local authority directly.

Can I find out whether my local authority is doing anything already?

We’ve endeavoured to record on our active travel intervention map where councils have taken measures to create safe space for social distancing. If your council hasn't yet taken action, you can use the Widen My Path map to show them where measures are needed, and our editable template emails to let your council know you’d done this and point them towards Widen My Path. .

We know we haven’t captured every scheme or proposal on our map, so please do tell us at campaigns@cyclinguk.org  if we've missed anything your council’s doing.

I’ve already told my council what’s needed and where, what more can I do?

Over 11,000 people have used our online action to contact their council, and thousands more have used Widen My Path or other engagement tools to make specific suggestions. If you are one of them, thank you. But space for social distancing isn’t just important for people who cycle, it benefits everyone.

That’s why councils need to hear from a wide range of people, so they know that there’s public support for giving more space for people walking, enabling more people to travel actively, and making it possible for people to move whilst socially distancing. 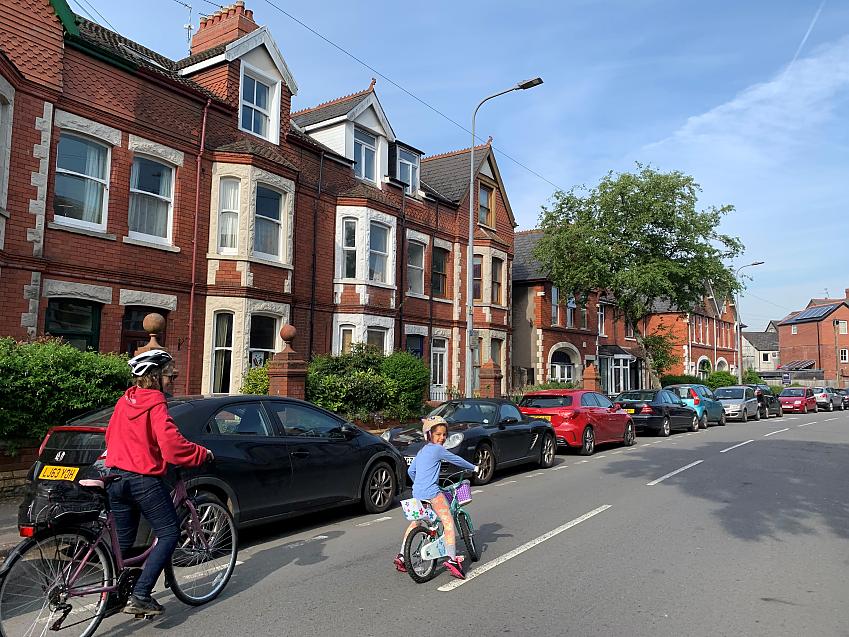 What can I do if my Council’s just not listening?

After Cycling UK wrote to every council leader in April, and people started using our online action to do the same, a number of councils said they had no plans to install temporary infrastructure or put in place measures to enable more people to walk and cycle whilst maintaining social distance. As more people contacted them, put forward suggestions and made the case for active travel interventions, some of them have quietly changed their position and are either considering or implementing changes.

It’s hard to keep up the pressure and momentum when it feels like you’re not being listened to, but councillors repeatedly say that they need public support for bold changes, so anything you can do to get somebody else to engage with your council about this is really helpful.

It’s easy for councils to ignore a few people, but harder when the few become many.

Where can I found out more information about Cycling UK’s campaign?

You can find answers to other frequently asked questions about this campaign.

With schools reopening, it's crunch time for English councils to keep kids cycling beyond lockdown View

Lancashire, Dorset and Leicester among most ambitious councils for cycling View

Transport secretary “actively looking at” rolling out cycle training for everyone View
Cycling UK continues to support the UK to cycle
This remains true during this difficult period with the ongoing threat of coronavirus Covid-19
Read our latest advice on cycling
Join Cycling UK to help us change lives and communities through cycling
Membership gives you peace of mind insurance, discounts in cycle shops, rides & routes
Join now