Going back to her roots, Cycling UK’s digital communications and media officer Lauren Purdy spent her Easter weekend on the various trails of the Peak District

Have new bike, will ride. That’s the saying, isn’t it? My new arrival was timed perfectly with the Easter break and with my plans to head back to the Derbyshire/Nottinghamshire border to stay with my parents.

It was also the perfect excuse to pack the car and head home to explore some of the routes I enjoyed as a child during my school holidays – granted, it took a bit of creative packing to fit my new bike in (I think the gravel handlebars were the issue).

Over the weekend we covered the Monsal Trail and the High Peak Trail, both of which I’ve cycled many times, along with the Tissington Trail, which we didn’t quite have time for (a shame as that one is my favourite from memory).

My dad commented that as a five-year-old I once cycled all the way from Middleton Top to Parsley Hay (11.6 miles) and three-quarters of the way back again. All on a bike with little fat wheels that I rode until I became so tired that I almost fell asleep, eventually having to be taxied on the top tube of my dad’s bike as he carried my bike in one hand.

This time, I stayed wide awake on my new gravel bike, which made light work of the bumps and rocky terrain of the once magnificent Victorian railway that weaves through the Peaks, Britain’s first National Park.

It was hard to resist speeding off up the trail ahead of my Fiancé on his modified single speed rigid mountain bike and my parents; both on their retro steel Diamond Back Mountain bikes – purchased shortly before I was born… I am trying to convince them both to purchase e-bikes, which will be like moving from dial-up to fibre optic for them. 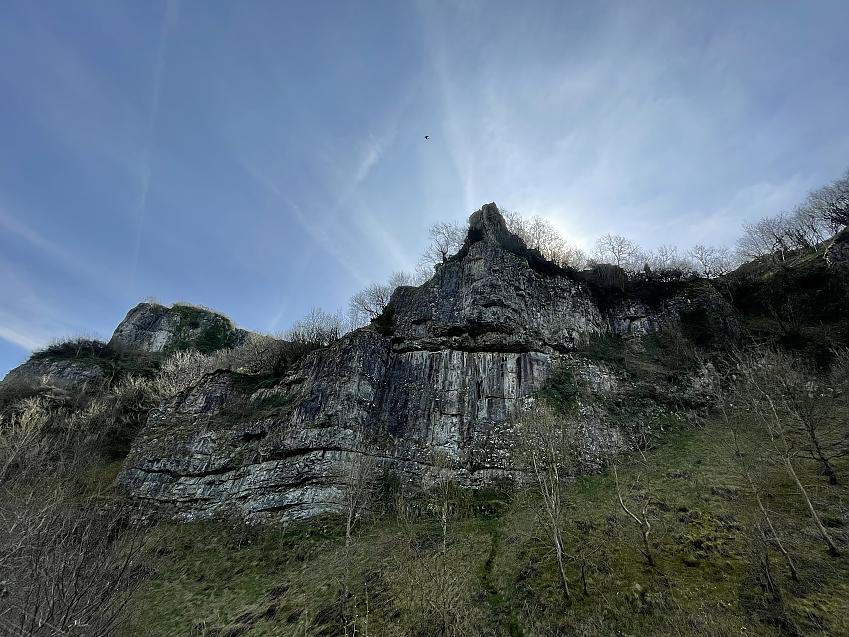 The route is lined with magnificent limestone cliffs

There are four car parks you can start from; just make sure you arrive early, whichever you choose, particularly if it’s a school/bank holiday or weekend.

We parked at Bakewell Agricultural Business Centre as it’s a bit more tucked away from the main town. There’s also Bakewell Showground car park, Bakewell Bridge Car park or Smith’s Island Car Park, which I would only recommend as a last resort as it gets incredibly busy and takes a while to get in and out of on a busy day.

From the Agricultural Business Centre car park, there’s a path to the north that leads from the town to Coombs road. You have to dismount and walk a few seconds before joining the carriageway.

From there, turn right onto Coombs Road heading south-east, following it round until you reach a tall railway bridge, which marks the start of the Monsal Trail on the left. Walk up the steep ramp towards the top and you’re ready to enjoy the off-road gravel goodness.

What I love about the Monsal Trail is that there is so much to see. If you’re anything like me and count yourself as a bit of an ornithologist, you won’t be disappointed either: there is a great mix of birds to see along the trail, and so many Pheasants in the many fields that line the route that their pleasant call is a lovely accompaniment to the ride.

The first remnant of the Midland Railway line you’ll come across is the old Bakewell station, which is now the office of a manufacturing company but still a lovely and well-used building.

As you head along the trail you’ll soon come to what was Hassop station, now a charming café where we stopped for a filling lunch on the return journey. It also houses a bicycle hire centre and is home to Peak eBikes, which offers cleaning, repairing and servicing. There’s also a brand-new B&B on site for those coming from further afield.

My favourite part of riding any ex-railway line trail is cycling between what were the station platforms; there are so many great examples of these on the Monsal Trail. 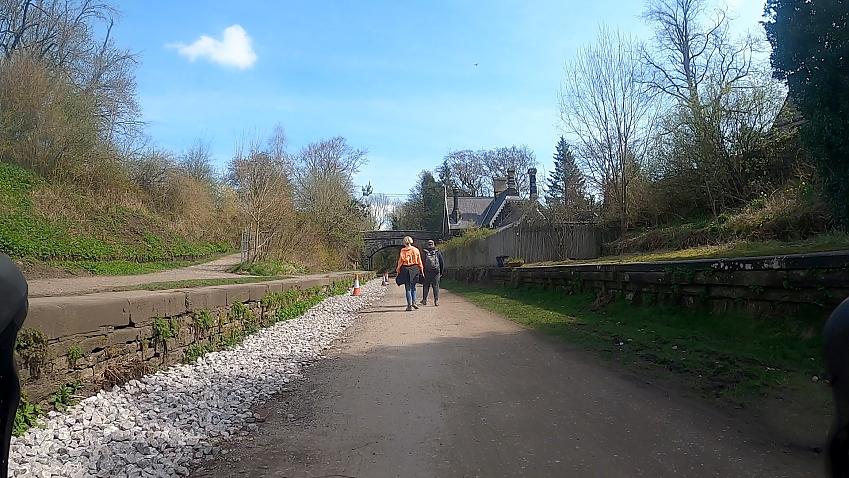 Cycling between what was one of many station platforms

There are six tunnels along the Monsal Trail: all carved into millions of years of geological history. Each one surprisingly cold, slightly damp, and excitingly dark.

Zipping through them on the bike certainly wakes you up. They really heighten the senses and give you a mini adrenaline rush as you head through.

The first tunnel, Headstone, leads to Monsal Dale Viaduct; standing over the dale that was eroded by glacial meltwater during the last ice age, forming a gorge through layers of limestone deposited millions of years ago. With beautiful views into the valley, this is a particularly special spot to me and my family as it’s where we scattered my grandparents’ ashes last year. 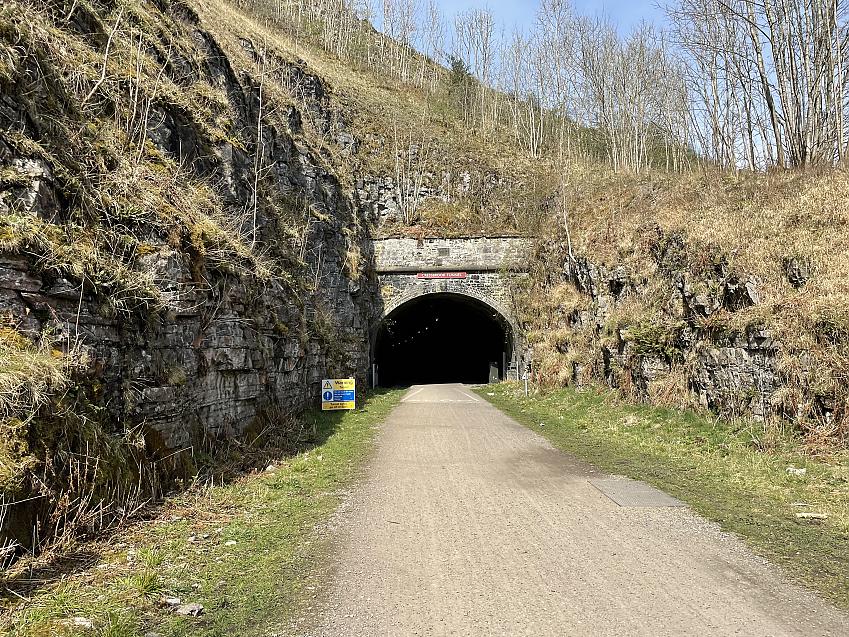 Cressbrook tunnel, one of six tunnels on the trail

The viaduct, built in 1863 to service the Derby to Manchester section of the Midland Railway, is 300 feet long and has five 50-foot span arches, making it one of the most impressive viaducts in Britain.

Personally, I think it’s a stunning structure, best appreciated from the vantage point at the top of the valley by Hobb’s café just off Castlegate Lane (but whose height you can only admire when you’re looking over the edge).

Not everyone was a fan, though. John Ruskin, the leading English art critic and poet at the time of its construction, claimed it had destroyed the stunning landscape. Nearly 150 years’ worth of visitors disagree, thankfully. 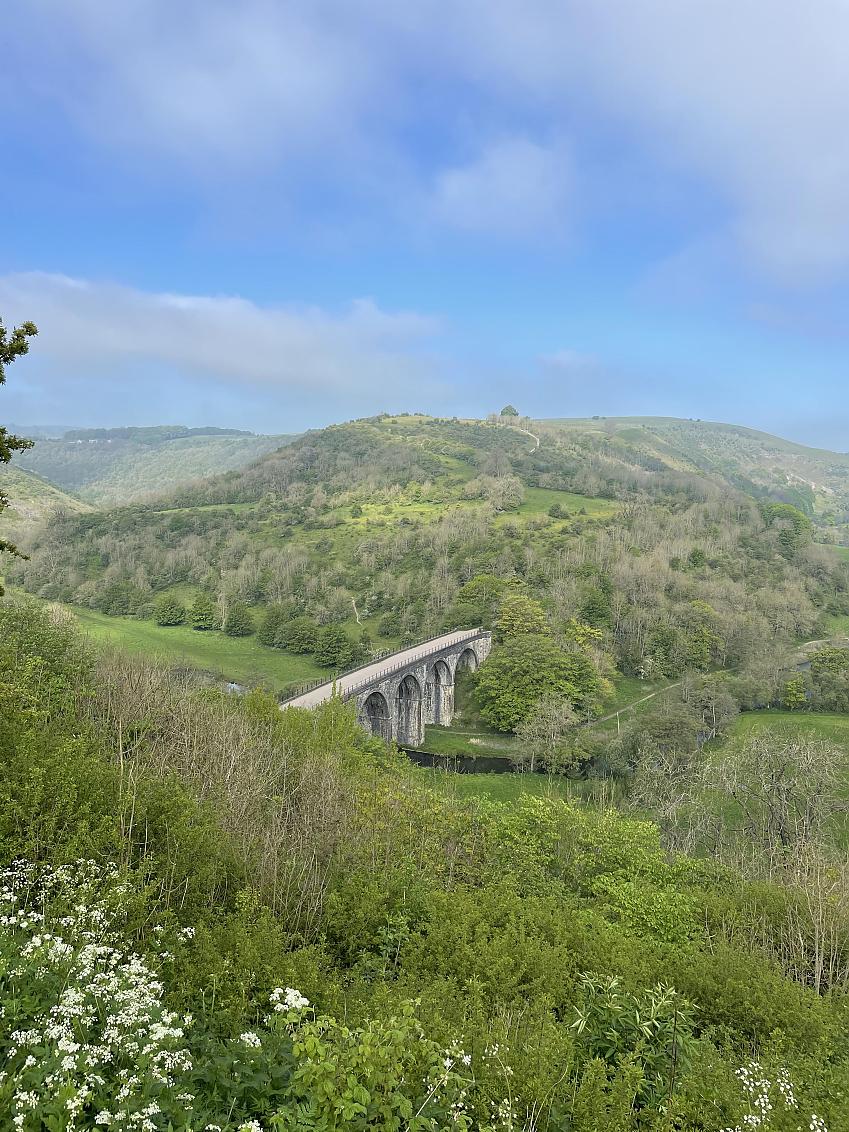 An impressive ‘cotton-white’ building, the mill has a bit of a grim history. Orphaned children were brought from cities across the country and forced to work in the mill while living in the apprentices’ cottages behind. During the 19th century this forced labour produced high-quality cotton for the lacemaking industry.

Shortly after the railway line opened in 1863, the mill owners requested that a siding for minerals traffic was built. In 1866, both Monsal Dale siding and passenger stations opened. The station, popular with walkers, closed in 1959 and the last train ran on the Midland Railway in 1968, three years after the mill ceased spinning. It is now private apartments, much like most British mills still standing.

As you emerge from Cressbrook tunnel, upstream of Cressbrook Mill lies Water-Cum-Jolly. You will spot a river gorge lined with limestone cliffs to your right and, if you take time to pause for a few minutes, you could be lucky enough to see Dippers and Grey Wagtails darting along the River Wye.

Continuing along the trail, which is scattered with beautiful spring flowers including snowdrops, blue bells and even fragrant wild garlic, you’ll soon arrive at Miller’s Dale station, which makes for a perfectly timed comfort break or ice-cream break – whichever you’re more in need of. 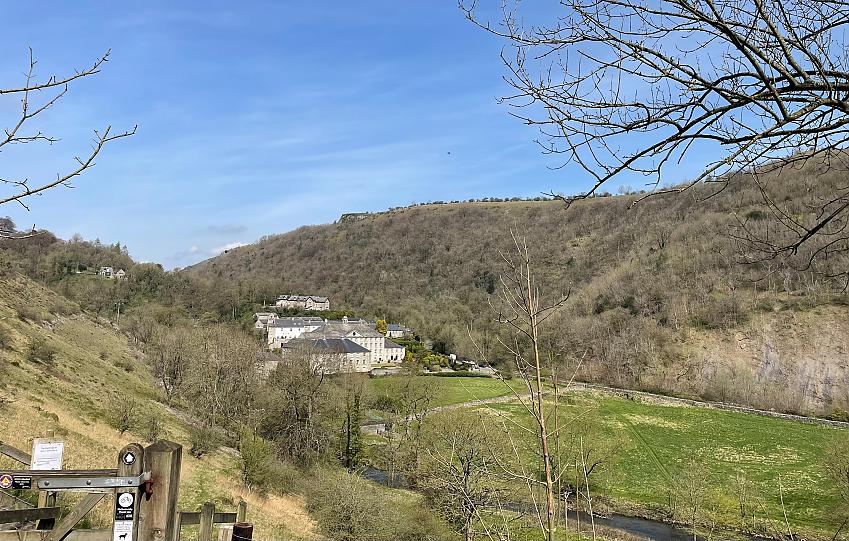 The railway that fed local industries

Further on you’ll reach the Old East Buxton Lime Kilns, an impressive and imposing structure that looks like it’s straight out of a Star Wars movie. In use from 1880 until 1944, this building housed lime kilns that produced more than 50 tonnes of quicklime a day.

The demand for this product increased so much during the 19th century (to supply the nearby growing steel, chemical, and agricultural industries) that limestone quarries and kilns popped up across the country next to railways; their fires fed by local coal. Boys and men had the unpleasant job of working in such heat while drawing out the caustic quicklime from the kilns that their skin burned.

Today, the kilns are home to a mix of wildlife. They house swifts and several types of bats including Natterers, Brown Long-eared, and Daubentons.

As you approach Chee Tor tunnel, to the right you’ll often see groups of school children abseiling over the edge of a 50-foot high bridge over the River Wye – not a pastime for the faint hearted. When you emerge from the other side and head towards the imaginatively named named Chee Tor 2 tunnel, you’ll notice climbers clambering up the cliff face to your right, which is a popular spot. 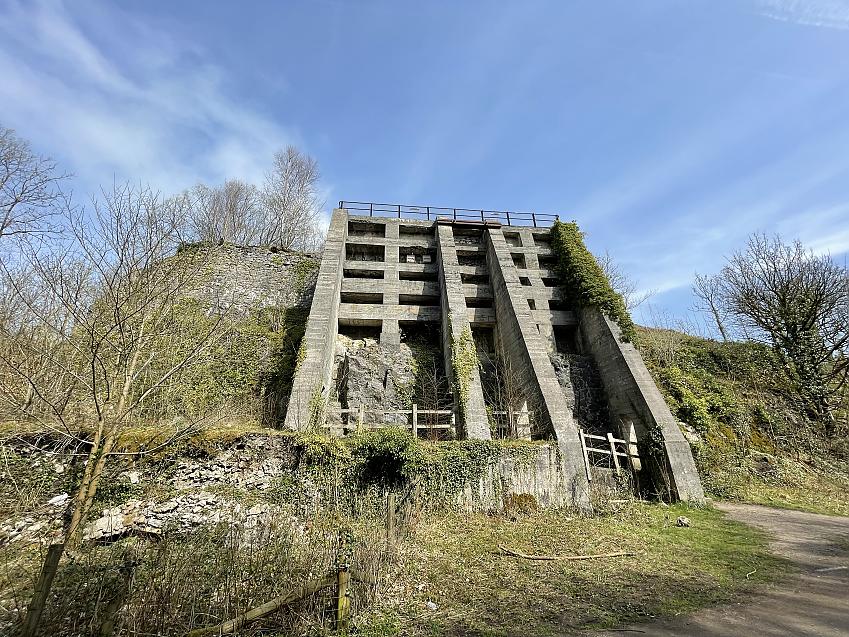 Eight and a half miles along the trail you’ll reach a sign for Blackwell Mills Cycle Hire, which marks the end of the cycle-accessible part of Monsal Trail. If you go down the steep gravel hill (it’s best to dismount here) you can grab a coffee from the cycle hire hut.

Blackwell Mill was a corn mill that stood on the River Wye at this site from around the time of the battle of Hastings in 1066. Most of it has disappeared apart from the weir, which is now marked as an ancient monument.

From this spot you can admire the quaint cottages at Blackwell Halt set back from the Wye, which used to house railway staff working on the Midland Railway. Blackwell Mill station, also referred to as Blackwell Mill Halt, was only long enough for one carriage and was reputed to be the smallest passenger station in Britain.

The last train ran on the railway in 1968; now you can enjoy eight and a half miles of traffic-free cycling. 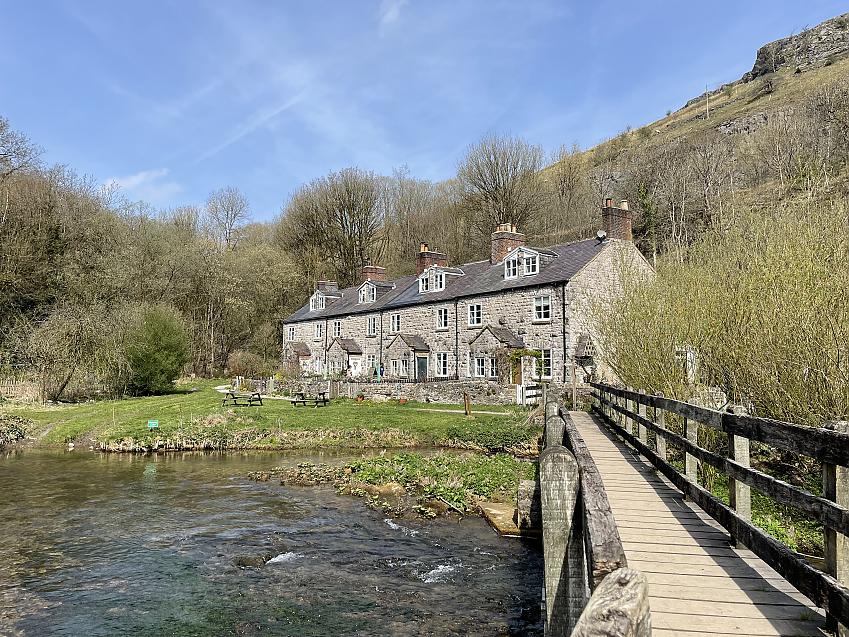 From here, you can continue down the pot-holed road to Wyedale Car Park (another option for a start point if you’re coming from the Buxton direction, but bear in mind this car park is tiny) and on towards Buxton. The road itself is lined with aromatic wild garlic and runs parallel to the Wye in which you can spot trout in the calm clear water.

We chose to turn back and do the return journey. If you wanted to continue to Buxton, you’d have to brave the A6 for just over three miles.

The route is uphill until the middle and then levels out before heading downhill, which is a nice finish. Secure your bike back in the car if you’re driving home before heading into the busy Bakewell town centre for a wander and a well-deserved Bakewell pudding from The Old Original Bakewell Pudding Shop.

Distance: 18 miles (includes distance from the car park to the beginning of the trail at Bakewell and the section from Blackwell Mills Cycle Hire to Wyedale Car Park)

Conditions: A short section of road leading to the trail (a longer section at the Wyedale end if you wish to continue to Buxton) and tarmac’d tunnels. Gravel otherwise. Plenty of potholes on the section from Blackwell Mills Cycle Hire to Wyedale Car Park, so watch your line

Accommodation: There are plenty of traditional inns in Bakewell town and lots of B&Bs along the route itself