The GP who 'prescribes' cycling

The GP who 'prescribes' cycling

Dr Katie Walter is a GP in Inverness and she works hard to encourage and help her patients to cycle. She explains how seeing cycling help her long term patient Mick Heath, led to her to promote cycling, then help to create WheelNess and other projects to share the health benefits and joys of cycling.

I love my job as a doctor. Truly, every day I go to work, I feel very, very lucky.

I work in a rubbish crumbling Victorian building with manky brown carpet tiles that curl round the edges. I work 12 or 13 hour days. I routinely forget to pee. I even more frequently forget to have more than a pint of fluid in a day, which might explain the peeing. I regularly have a duff lunch. I not infrequently get shouted at (but not anything like as often as the reception staff). I almost invariably come in on my days off to catch up on paperwork.

But I still love my job. What motivates me to come to work? The jokes, the folk, and being a tiny, tiny cog in the great big NHS.

I'm a GP in a large 'inner city' practice. You have to take inner city with a pinch of salt, as the rapidly expanding city of Inverness still feels like a town. Don't get me wrong, with nearly 10,000 patients we see our fare share of deprivation. It's a leafy town, and that sometimes camouflages poverty. And as a GP, deprivation and poverty are most definitely my business, as the single biggest risk factor for illness and death: Scotland is still the country in which your life expectancy can have a 13 year gap depending on your postcode.

I won't bore you with the evidence behind this, but it is there. Cycling and walking can help. Cycling, even if it is in a car-laden city rather than the capital of the Highlands, is good for your physical and mental health. Walking is too by the way, and we tend to try to encourage both walking and cycling together as a practice.

Walking and cycling are good for your health, but they are also good for your community, and in these times of climate emergency, they may be the one wee step we can make as individuals to make our planet healthier as well. If you want an easy digest of facts and fiction around cycling​, read cycling fallacies.

Over the last two years, together with our practice Cycling Champion Mick Heath, we have been working on a number of initiatives to try to tackle ill health through cycling. Mick is a  a force of nature (think tornado) and a great advert for the health benefits of cycling. I first met Mick as a patient when he attended for a review of his recurrent depression, and he talked about how much cycling has helped him over the years to combat depression.Together we started cooking up a few things we could do to help spread the love, for the physical and mental health benefits of being physically active.

These projects have truly transformed my life. They all are focussed on overcoming some of the barriers to cycling.

WheelNess, which is run by Cycling UK, is one of my favourite projects: patients facing transport poverty or with underlying health conditions which would benefit from cycling could self refer to sign up to a free long term bike loan (a bit like a cycle to work scheme, but without the cost). They were kitted out from one of the local independent bike shops with an appropriate bike, helmet, lights, lock and waterproof jacket. Their end of the bargain is to participate in the evaluation undertaken by Cycling UK.

I was particularly pleased to see several of my patients get bikes through Women's Aid, and I can think of a couple of patients with MS whose lives have been truly transformed with a new found freedom. One nan decided she wanted to be able to cycle with the grandchildren, and that was her back on a bike for the first time in decades. One young dad in his late teens no longer had to walk back several miles at midnight after his shift. Several patients with substance misuse issues caused a few initial comments of "well that will bike will be quickly sold on" only to be seen regularly out on their bikes... One patient reported to a colleague: "You mean that they would trust me with a bike?".

The second year of WheelNess is slightly different - targeted groups such a cancer recovery patients, but also a large number of all ability participants with adapted bikes. What's not to like with a project that helps to restore dignity and respect and trust and independence. Oh and health benefits too.

It also highlights the need for better cycling infrastructure. Mick and I rapidly got involved in campaigning for this. It has been a huge learning curve, not always very successful, but has probably done more to help me realise that my role as a GP needs to evolve and change: we have a voice, as health professionals, and we need to start using it in new and different ways, out of the consulting room and with local media, local politicians, and our local community.

I never cease from saying to local decision makers, they have more power to improve public health with a few key decisions than I will ever have over 30 years of practice.

As I never cease from saying to local decision makers, they have more power to improve public health with a few key decisions than I will ever have over 30 years of practice. They need to realise that power, and use it wisely. And as health professionals, we should start publicly holding them to account.

So my new role is to foment activism in other health professionals wherever I can!

It has also opened my eyes to the need for coordinated activism with disability groups and campaigners for better pedestrian access - we need to work together to ensure that what we campaign for addresses everyone's needs. What might seem like an ok idea as a cyclist might actually be a catastrophe as a visually impaired pedestrian.

Another pretty special project that Mick has been a driving force for, alongside another volunteer Moira Finlayson, is Cycling Without Age Inverness. We set this up 18 months ago and it has been a roaring success.This project was born from the desire to give those who could no longer cycle all the mental health benefits from wind in the hair and sunshine and trees. We have over 100 volunteers, 4 trikes in the practice garage, we have taken out well over 2000 passengers from all the central care homes, the Highland Hospice and now from isolated folk at home as well on trike rides to green spaces. It has been such a success that we are setting up a new charitable organisation, Spokes for Folks.

We have also been working closely with local social enterprise Velocity Cafe and Bicycle Workshop, who have been running a Cycle to Health project for a number of years. Several spin offs have come from this collaboration, not the least a nationally funded pilot for an Active People clinic, based in surgeries, that gives a bit more time and space for patients to think about how to become more physically active in a sustainable way in their lives. This is a really exciting project as it also marks the start of a collaboration with the local University of Highlands and Islands to evaluate it as part of a formal research project. Working together is where it is at...

What is particularly satisfying is seeing some of these projects all come together. Last night I went to Raigmore Estate a place with high levels of deprivation, just next to the hospital, the campus and the biggest local employer, and yet cut off from them all, with rubbish infrastructure. It's locked by busy roads. We are actively recruiting young parents from the estate as WheelNess participants to tie in with the Bikeability classes at the local primary school, to help get families cycling.

Last night, we took out 16 passengers: the bingo ladies and gent were ferried from their own homes to the community centre, and four local residents were taken on their first ever trip over the Golden Bridge to the lovely new campus - a stone's throw away, and yet a million miles. We sat and watched the swans and ducks in a cool breeze after a sweltering day. There was a lot of laughter, and fun, and chat with all around. We cruised back through the streets of Raigmore estate with Belle waving like the queen, and Rena clutching on to her oxygen cylinder

Bicycles have been transformational to society ever since they were first invented. So get out there, and just do something - donate that bike that isn't being used to someone who will use it, mend that puncture, ditch the car and talk to your neighbour.

It's good for you, your kids, your granny, your community and your planet. And you will have a lot of fun in the process. 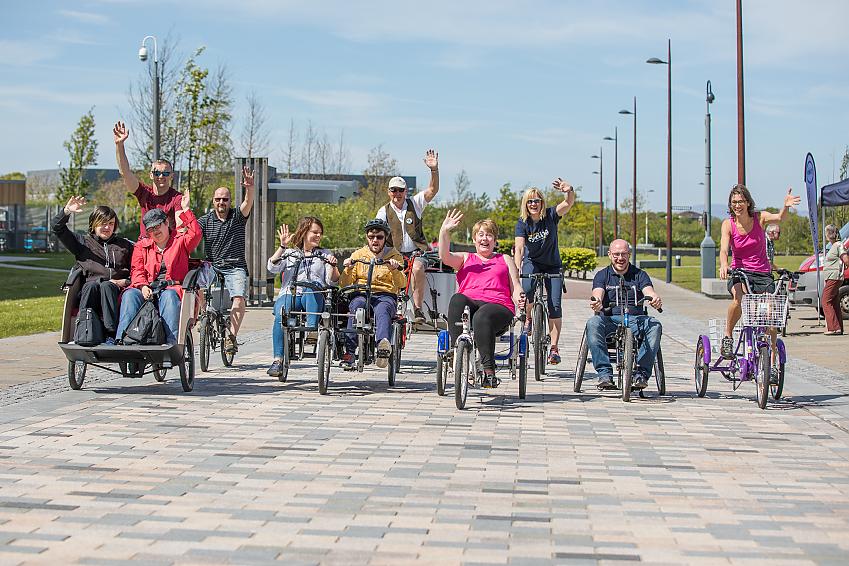 New WheelNess project to improve health and wellbeing by getting people cycling in Inverness View
Cycling UK continues to support the UK to cycle
This remains true during this difficult period with the ongoing threat of coronavirus Covid-19
Read our latest advice on cycling
You too can champion cycling in the UK
Give your support today to help Cycling UK’s charitable work tomorrow. We double every pound you give through other sources to help change lives and communities through cycling.
Volunteer now