Enforcing traffic law effectively: why wouldn't you?
By Cherry Allan
Thursday, 3 May 2018

Here at Cycling UK, we're working on our full response to the Government’s review of cycle safety and, in the third of a series of blogs on the themes we’re highlighting, our Campaigns Officer Cherry Allan explains why enforcement and education are a winning partnership; why roads policing needs a boost; why enforcement agencies need to collaborate; and how cyclists would benefit if this happened.

It goes without saying that most of us behave ourselves on the roads whatever vehicle we happen to be riding or driving, and we share at least some idea of what ‘behaving’ means. Much of it is simply a matter of common sense and citizenly conduct: we know we shouldn’t intimidate or endanger anyone else, and must act responsibly and legally.

Self-evidently again, cyclists and pedestrians are very exposed in comparison to people inside cars, and depend extra-heavily on everyone buying into a culture of considerate and safe behaviour on the roads. This is profoundly true of any parent waving off a child about to cycle or walk to school solo: they put their trust in every single road user along the way.

The trouble is, of course, that drivers - private and commercial - make mistakes, some don’t understand how to behave round cyclists, and others don’t care. Worse, there are those who wilfully and recklessly break the law. The theories of common sense and citizenly conduct, strong though they are, aren’t nearly strong enough; and especially not in the case of dangerous drivers, or rogue lorry fleet operators who, failing to follow the lead of more responsible companies, risk other people’s lives by putting profit over safety.

On the basis of their personal experience, I think most cyclists would agree that traffic law needs to be enforced more effectively. The perception that it isn’t, and that this impacts on cycle use levels, is something that MPs on the House of Commons Transport Committee picked up from their inquiry in 2016:

The level to which cyclists feel unsafe on the roads due to a perceived failure to enforce traffic law is at odds with the Government’s aim to promote cycling, and must be addressed.

Clearly, we need the authorities to step up, and make absolutely sure that a) everyone’s aware of road safety messages, traffic law and the reasoning behind both, and that b) those who disregard them inadvertently or knowingly are caught and, if necessary, penalised. This is, in other words, the classic and mutually supportive partnership of education and enforcement.

Education and enforcement: the winning mix

The Government’s long-term drink-drive campaign is one of the best examples of just how successful this combination can be. Awareness messages about the dangers are (or at least have been) backed up by strong enforcement activity – activity that the public has been primed to accept.

Marking the campaign’s 50th anniversary back in 2014, a DfT survey showed that over 90% of respondents agreed drink-driving was unacceptable and would feel ashamed if they were caught – only around half of male drivers thought the same in 1979.

Alongside a change in attitudes, we’ve seen a marked drop in the number of people killed in drink-drive crashes in Great Britain (down by around 85%), bigger than the drop in road deaths in total (-72%).

Alarmingly, though, compared to 2015, provisional figures for 2016 saw what the DfT called a ‘statistically significant’ rise in fatalities, killed or seriously injured (KSI) and the total number of collisions and incidents where at least one driver was over the alcohol limit. Drink-drive awareness or enforcement – or both – seem to be weakening somehow, and dwindling numbers of road police may well be a factor.

In fact, this is probably the case not just for drink-driving enforcement, but for bad driving offences more generally.

A misbehaving driver is thus far less likely to be caught by a patrolling officer, a very worrying development given that visible policing and the fear of being apprehended is known to influence driving standards far more than the severity of any ensuing punishments.

On the face of it, the downward trend in the number of ‘dangerous driving’ offences recorded by the police – 39% fewer in 2015/16 than in 2004/5 – might suggest that driving standards have improved. But, as the number of reported casualties has dropped by less, this does not appear to be the case. It is more likely that the sharp fall in recorded offences simply reflects diminishing resources available to detect them.

And, even if police officers are called to a collision scene, thin resources may compromise their subsequent investigations, charging decisions and, in turn, the processing of the case through the justice system.

See our briefing for more on road traffic policing numbers.

With many forces so stretched over traffic duties, it is hardly surprising that some are not as keen as they ought to be on local authority road safety measures that require police involvement: 20 mph limits, for instance.

Any police opposition to a council’s interest in 20 mph schemes is a big let-down for road safety: lower speeds are popular with residential communities and, when observed, improve feelings of safety and the capacity of cyclists and pedestrians to mix safely with local motor traffic.

Good design (and education), though, can help make it obvious to drivers that they must drop their pace in certain streets, with the result that police enforcement - which is still essential - may prove no more of a burden than it is for 30 mph, especially if backed up by cameras.

One of the points we’ll be making in our response to the DfT’s Cycle Safety Review, therefore, is this: national government needs to give roads policing a much higher priority so that Police and Crime Commissioners can allocate the resources it deserves. Why, we ask, wouldn’t you do that?

Each police force is independent, of course, and without doubt there are those who take a tougher approach to road crime than others, some devising initiatives that Cycling UK is keen to promote as models for others.

In 2016, the West Midlands police came up with ‘Operation Close Pass’, an exemplary education/enforcement campaign designed to target drivers who overtake cyclists too closely. 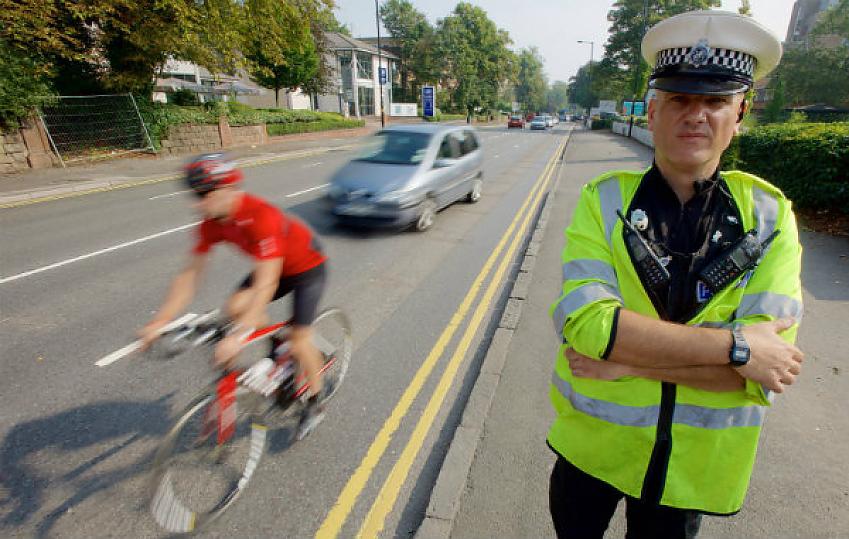 The operation, which is still going, involves intercepting drivers who don’t give a plain clothes police officer on a bike enough room, and pulling them aside for ‘roadside educational input’, i.e. a demonstration of safe passing distances on an illustrated ground-mat.

Thanks to the scheme, reported close passes dropped by half in the first three months and, as the police like to point out, repeat offenders, those who drive dangerously close, and those who decline the mat-session, might still end up in court.

The idea so impressed us, that we crowdsourced funding for similar mats and have now posted them out to most other forces in the UK - find out more from our Too Close for Comfort campaign.

Inevitably, with or without ubiquitous roads policing, witnesses or victims often need to report road crime themselves, more likely than ever nowadays with dash- or helmet-cam evidence attached. This makes user-friendly reporting systems vital, along with the assurance that the police will deal with all submissions properly. There are some good examples of this too, i.e.:

Another good thing about efficient reporting systems is that they are, potentially, a useful resource for research on the causes of traffic collisions and near misses, which could, in turn, help inform both local and national road safety policies.

As mentioned, Operation Crackdown is run jointly by several partners, an approach that makes particular sense as far as enforcement is concerned given the chain of agencies involved. Cycling UK is a strong supporter, therefore, of London’s intelligence-led Freight Enforcement Partnership (LFEP).

Established in 2015, the LFEP unites TfL, City of London Police, the Met Police and the DVSA in targeting non-compliant freight drivers, vehicles and operators. In its two first years, this multi-agency stopped and checked 33,000 freight vehicles; and issued 9,114 fixed penalty notices and traffic offence reports, along with 5,600 mechanical prohibitions to operators with seriously defective vehicles.

With lorries posing a disproportionate risk to cyclists in urban areas, Cycling UK has been urging the Government to set up a national scheme based on LFEP’s model.

The Health and Safety Executive (HSE)

The police are not the only agency with a role in traffic law enforcement. Apart from the DVSA and DVLA, the Health and Safety Executive (HSE) is another body that plays – or ought to play – its part.

This is important firstly because the HSE is empowered to enforce workplace health and safety law, which covers work-related driving; and secondly because around a quarter of all reported road casualties are hurt in incidents involving a driver/rider who is driving for work.

The imperative for the HSE to give its road safety responsibilities much higher priority became acutely apparent to Cycling UK in the case of two cyclists who were struck and killed when an HGV driver fell asleep at the wheel in Cornwall, in 2013.

While the driver was imprisoned for dangerous driving, the HSE declined to prosecute his employer, Frys Logistics, who had regularly allowed him to drive in an exhausted state. The HSE excused itself on the basis that taking action didn’t fit its own self-made policy, and that the DVSA was the agency best placed to deal with drivers’ hours infringements.

This case not only highlighted HSE’s extraordinary indifference, in fact, but also a collective failure by other agencies tasked with investigatory, enforcement and regulatory functions.

Partnership working, as we say, is crucial – another point we’ll be making in our response to the DfT’s Cycle Safety Review.

Enforcement and beyond: further reading and action

Improving cycle and walking safety doesn’t stop at enforcement. There’s the legislation itself, penalties and the Highway Code, along with other matters such as infrastructure and direct vision for lorries. All of these contribute to the ‘Safe Systems’ approach we advocate, and we’ll be covering each (plus funding) in our response to the DfT’s Cycle Safety Review – see our booklet Cycle safety: make it simple for a summary.

Also, watch out for our ‘Why wouldn’t’ you?’ blog-a-week throughout May and, if you haven’t done so already, have a read of our Policy Director Roger Geffen’s two preceding blogs, the first setting the Cycle Safety Review scene, the second giving his thoughts on cycle-friendly infrastructure and consistent design standards.

Finally, please do get involved in our Cycle safety: make it simple campaign by sending an email to the Cycle Safety Review team at the DfT in support of our recommendations, and contacting your MP about road safety laws and their enforcement.

Britain’s potential cyclists put off cycling due to traffic conditions and potholes View
Cycling UK continues to support the UK to cycle
This remains true during this difficult period with the ongoing threat of coronavirus Covid-19
Read our latest advice on cycling
Join Cycling UK to help us change lives and communities through cycling
Membership gives you peace of mind insurance, discounts in cycle shops, rides & routes
Join now