My Ride to Work: Cherry Allan

My Ride to Work: Cherry Allan

The latest in our series of Cycle To Work Day tales is this blog from Cherry, our researcher and information coordinator. As a long-established cycle-to-worker, Cherry shares her reasons why she loves to ride to work and her honest reflections on her experience.

I think one of the upsides of my cycle commute is its amusement value. I’ve chosen a route that’s not the same terrain all the way, so monotony isn’t a problem. I live in what’s called a ‘village’ (though I’d say it’s more of a Godalming suburb), and from there I cycle cross-country into Guildford to CTC’s offices around 6.5 miles away, or just over half an hour's cycle.

My ride into work is a varied one, which adds to the fun. Having cycled along a few local streets, which feel reassuringly homely, I move onto: a shared-use path by an A road (a nice touch, meaning that I get away from heavy motor traffic for a while); a bridleway, bringing me close to nature every day - foxes, slow worms, jays and the like; through a park, complete with early-morning Tai Chi exercisers and the local take-off spot for hot air balloons; and onto a wide, busy arterial road which I actually quite like - it's liberating and speedy. 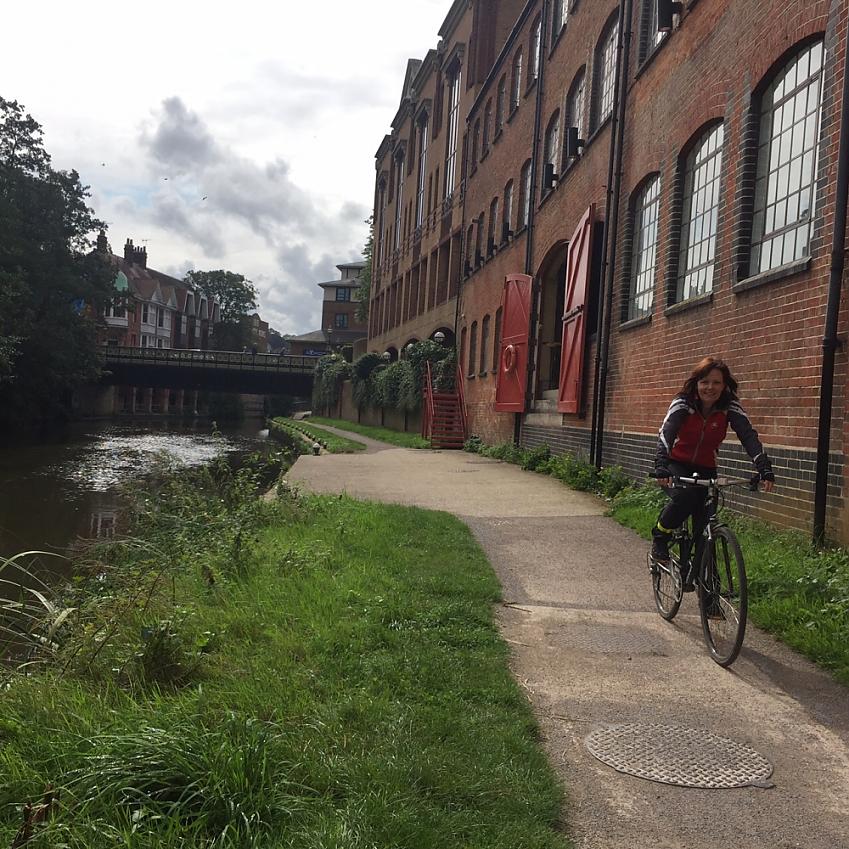 Now in the centre, I pass over Guildford Town Bridge, an old and beautiful structure surrounded by willows, which makes me feel like an admiring tourist in my own neighbourhood.

The Wey Navigation towpath, which comes up next, is some extra entertainment: I am regularly greeted by an incredibly furry cat and, just once, saw a pair of cormorants diving. I'd never seen cormorants away from the sea, so had to consult a bird book on that one (I'd show you some pictures of them, but my wildlife photography is pretty bad).

Finally, the uphill section through some town streets adds to my exercise, but is my least positive experience to be honest – it’s congested and narrowed by parked cars, so drivers and I don’t always get along, I'm sorry to say.

The best thing, though, is that I don’t have to rely on anything like a Kindle, the Metro, an iPad, iPod or drive-time radio to fight off commuting boredom."

The best thing, though, is that I don’t have to rely on anything like a Kindle, the Metro, an iPad, iPod or drive-time radio to fight off commuting boredom. Cycling is all the entertainment I need.

Also, when I take the train into Guildford, pick up my 'station bike' and ride up from there for two of the darkest, coldest and muddiest winter months, I soon start to feel less fit. It always amazes me how much difference reducing my daily cycle ride by only a few miles makes in such a short time.

I haven't stopped to calculate the amount of money I must have saved over the years - e.g. by cycling instead of using the train and/or bus all the time, but I'm certain that it's made a welcome impact on my bank balance too.

With so many people living within a cycle-able distance of work (we found out that nearly half of all working people in the UK live within five miles of work), I can wholeheartedly recommend you take up this form of commuting, and what better time to do so than on Cycle To Work Day 2015?

Cycle To Work Day takes place on 3 September. You can pledge your ride to work for a chance to win some great prizes.