Was Boris Johnson 'naughty' for giving his wife a backie?

Boris Johnson caused some consternation giving his wife a backie on his bike
By david.murray
Wednesday, 29 July 2015

Was Boris Johnson 'naughty' for giving his wife a backie?

Earlier this week, Mayor of London, Boris Johnson hit the headlines for giving his wife a backie on his bike. Our reaction - he was 'very naughty' and 'We would never encourage cyclists to break the law'. David Murray explores the world of the backie in more detail.

Boris Johnson was "naughty" and should have known better than to be caught giving his wife a "backie" on his bike while cycling in London. That was our light-hearted reaction when the Press Association called for our reaction to this silly-season political knockabout story. We assumed this would play to the media's characterisation of 'Boris the buffoon'.

Yet some newspapers still managed to portray CTC's reaction as straight-laced affronted criticism - particularly those papers who were keenest to have a go at Boris.  And this in turn prompted something of a Twitter backlash from people who felt CTC should instead have celebrated the 'Boris Backie' as a positive act of civil disobedience, calling for a relaxation in the law!

On the one hand, CTC's standard response to stories about red-light jumping, pavement cycling etc, is to make it clear that we believe all road users need to respect one another's safety and the rules of the road.  We do not defend law-breaking by cyclists, any more than you'd expect the AA to defend lawbreaking by drivers.

Section 24 of the Road Traffic Act 1988 makes it an offence in Great Britain to carry a passenger on a bicycle unless it is "constructed or adapted" for this purpose (although there is no definition of what this means).  Moreover, similar offences were contained in the preceding Road Traffic Acts of 1972 (s21) and 1960 (s13).

Yet as blogger @AsEasyAsRiding (aka Mark Treasure, chair of the Cycling Embassy of Great Britain) observed in his wonderful "Not dangerous" blog, what Boris did would not only be legal in the Netherlands, but perfectly normal. 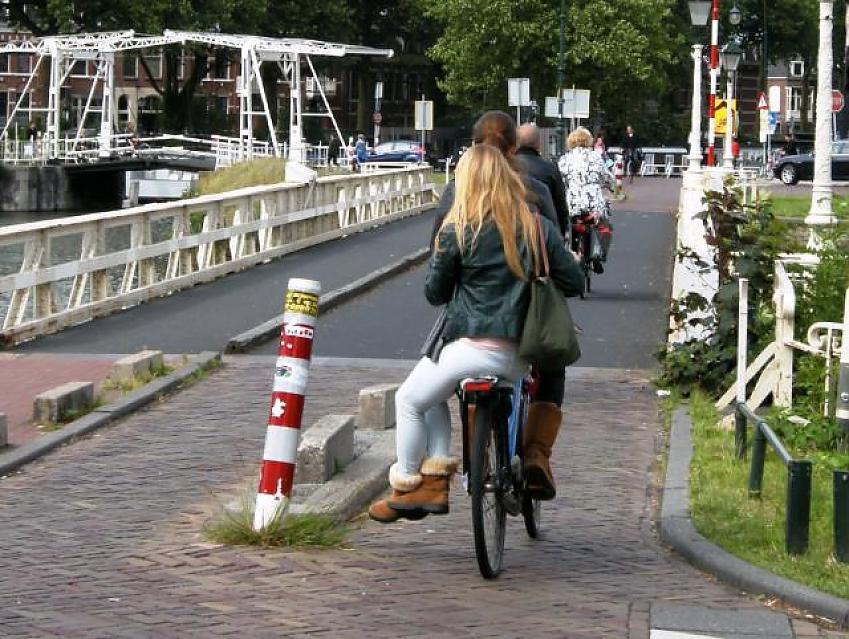 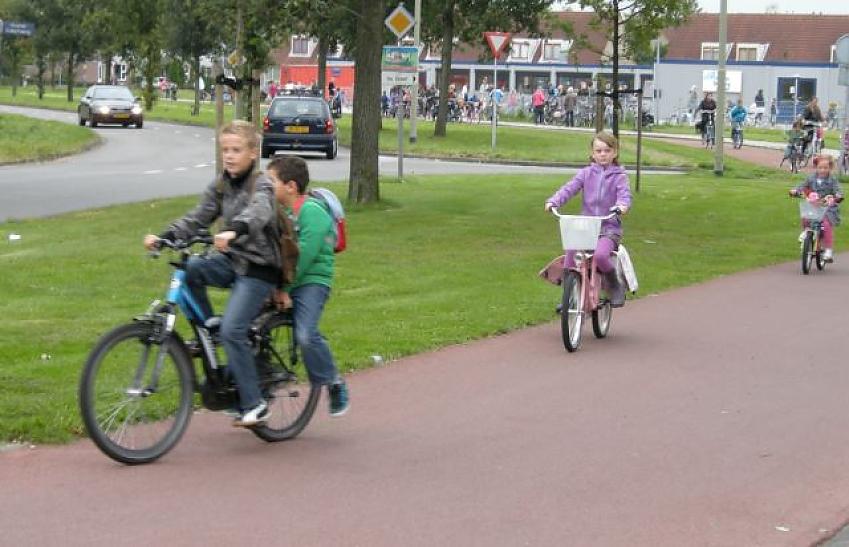 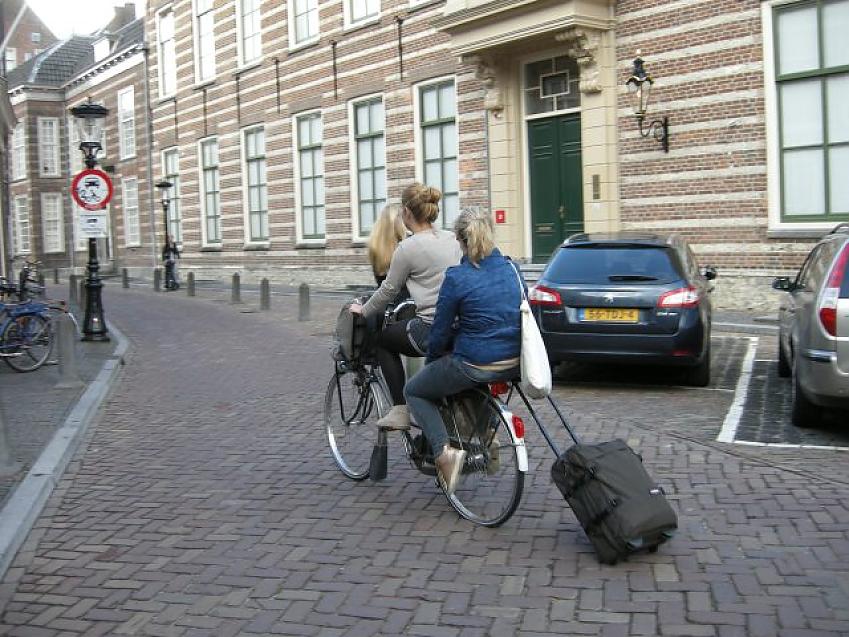 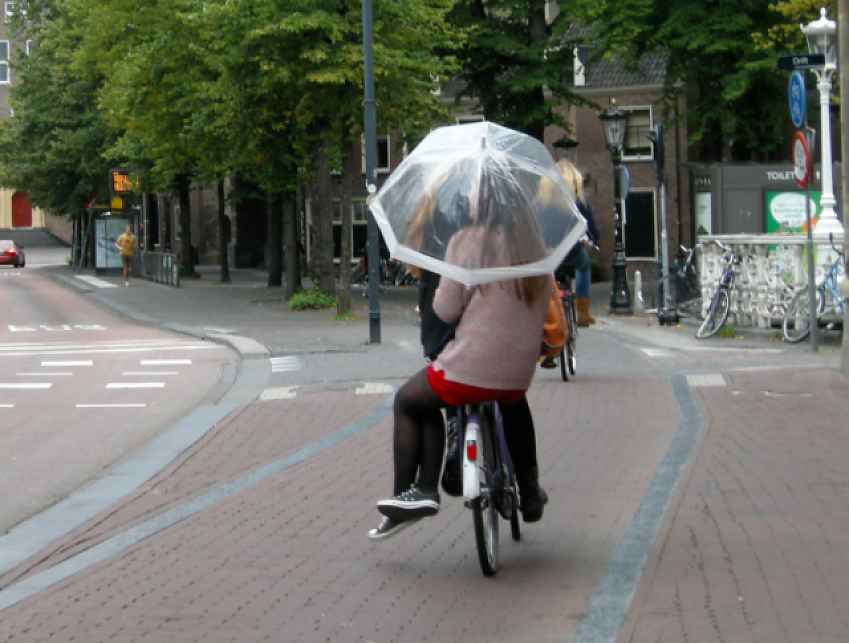 Admittedly, Dutch bikes are generally better adapted to giving backies: they have stronger and thicker spokes, they have wheel-guards as well as chain guards (to prevent clothes becoming caught), and the rear stays and racks are typically stronger too.

The one respect in which Boris stands out is that the offence of passenger-carrying is overwhelmingly committed by cyclists in the 10-17 and 18-30 age groups - Boris, you're too old for this sort of thing!

Fixed penalty notices (FPNs) for backie-riding aren't exactly common either. This Freedom of Information Act request revealed that cycling with an unauthorised passenger accounted for 7 out of 3985 FPNs for cycling offences in London in 2010, 13 out of 3758 in 2011, and 9 out of 2752 in 2012 (see table).

Still, if Boris wants to legally give his wife (or anyone else) a backie, he can always go to the Netherlands! Then maybe he'd come back full of ideas on how to transform our streets and junctions to be safe and cycle-friendly - in other words, to create Space for Cycling. Then he could really get on with making London the sort of place where nobody would bat an eyelid at a bit of backie-riding.

What do you reckon? Does Boris's backie make him a dangerous criminal or just a bit of a rogue?  Have your say on the CTC forum.

We need laws that make sense,

Our laws try and be black and white, 'no cycling on pavements'
if they are full of pedestrians this is a good law, if the pavements are empty, and traffic is going at 40 MPH it is where the cycles should be and the law itself endangers lives.

"We assumed this would play

"We assumed this would play to the media's characterisation of 'Boris the buffoon'. Yet some newspapers still managed to portray CTC's reaction as straight-laced affronted criticism..."

Is the CTC really so naive? What a missed opportunity to point out that a "backie" is only considered so dangerous (and illegal) in the UK because of the hostile motorised environment cyclists are forced to share.

Now you make that point? Now you link to Mark Treasure's blog, in this "cheeky" article? Here where no-one will see it, and the moment's gone? And of course most of Mr Treasure's readers will be those who already get it anyway.

Disappointingly slow off the mark there CTC. Please try harder if you genuinely want me to click the "Join CTC Today" link.

Biguana: You really think the

Biguana: You really think the UK's newspapers would have reported a worthy comment about Dutch infrastructure in a story about Boris's misdemeanours?

When we got to do live broadcast interviews on this story, we did indeed turn the discussion towards Dutch infrastructure - just as we've done in the version above.

However, with pre-recorded interviews and the print media, you have little control over which bits they use and what they leave out to make you fit their own agenda. In this case, some media outlets were so determined to knock Boris that they chopped us down to just four words, selectively quoting us to make us sound affronted and serious, when we were being nothing of the sort. It was perfectly clear that if we hadn't taken a gentle swipe at Boris (however light-heartedly), we weren't going to get quoted at all.

Still, if you think you could have got them to include a quote from us on Dutch infrastructure in this story, you're very welcome to apply for the Communications and Media Officer vacancy which we're currently advertising! We're looking for a road safety campaigner and a fundraiser too - see https://www.ctc.org.uk/about-ctc/vacancies

Roger, thanks for the

Roger, thanks for the response and the invitation. I know my tone would carry more weight if I wasn't just sniping from the sidelines, and I do appreciate those of you who put the hours in, but I'm afraid other commitments and all that.

I did think previously about what might be concise and yet more helpful. Maybe something like:
"While the CTC doesn't condone behaviour which is illegal and potentially dangerous in the UK, we would point out that backies are allowed and even commonplace in cities which have safe space for cycling (such as those in the Netherlands)."

Sure, many (most?) papers might not be interested, but maybe nothing at all is better than giving the impression that the CTC is fully and actively against what's perceived as some kind of frivolous errant cyclist behaviour, regardless of the context.

Is it harder to spin or "chop down" my suggestion that way? Who knows, maybe some media outlets might even be interested in looking at the other side of the argument? Or maybe I'm the one being naive now...

View from the Colonies. On

View from the Colonies. On the one hand, my curiosity is tweaked. Where were the Mayor and his wife going at that hour of the night that a backie would enter into their transportation plans? Then again I`m thinking haven`t their private lives been sufficiently laid out for all to see? Stand back. However some good could come of this exposure. As the American election cycle is now heating up again, perhaps Boris could, rather than preside over a debate, instead judge the prowess of all candidates for office as the contenders give their backers backies. Then we would see who the nimble ones were.