Cycling in England: where is it booming or busting?

Cycling in England: where is it booming or busting?

Was the population of England cycling more in 2018 than it was in 2017? And what has been happening locally? Cycling UKs Cherry Allan looks at the results of the latest Active Lives Survey.

By and large, the Department for Transport’s latest National Travel Survey (NTS) tells us that cycling in England has stagnated.

As I’ve mentioned in a separate blog, this makes Cycling UK even more convinced than we already were that our funding for cycling and walking campaign needs everyone to take action now and help get us out of this rut.

There’s another, rather different, statistical source on 2018 just out too, though: The Active Lives Survey (ALS) cycling and walking material.

What makes the ALS special is its local data, which means we can look at every local authority area in England to see how cycling and walking is doing in each of them. The survey’s only been running since 2015-2016, but now that it spans three years, we can make a little more of it trend-wise.

Sorry to report, but the ALS news on cycling frequency is even more disappointing than the NTS revelation that cycling at least once a week has flatlined at 14% over the last three years.

Most frequencies have, in fact, decreased. The only exceptions, both for leisure, are three times a week (no change); and five times a week (a small increase).

* Cycling for health, recreation, training or competition, not to get from place to place. This includes using an exercise bike indoors.

How about gender diversity in cycling?

The NTS figures fluctuate a little from year to year, but overall report that males tend to cycle around 2.5 to three times more trips than females.

The ALS’s data on cycling at least once a week more or less backs this up – it suggests men cycle at that frequency, making around 2.3 times more trips than women.

Clearly, women seem persistently more reluctant than men to cycle, and we know that road safety concerns contribute to this.

Now for what the ALS suggests is happening regionally and locally.

The survey monitors four frequencies of cycling, but to be consistent, I’ll stay with ‘at least once a week’. Consequently, the proportion of people who said they did any cycling at least once a week ranges from 3.4% (Havering) to an impressive 57.5% (Cambridge).

Note: in the ALS context, ‘travel’ means getting from place to place, e.g. commuting or going to a friend’s house, but the NTS classifies the latter as leisure.

It was no change for all other regions.

It was no change too for most of the 89 shire counties, unitary and metropolitan authorities.

There were, regrettably, ‘significant decreases’ in eight of them over the survey’s three-year timespan though for: Blackpool, North Lincolnshire, Telford & Wrekin, Luton, Hertfordshire, Norfolk, Medway and West Sussex.

Note: whether or not an increase or decrease is significant has been determined by the DfT’s statisticians.

For most lower tier authorities (270), the ALS comes up with ‘no change’ yet again, apart from four ‘significant increases’ – yay! – for Stratford-on-Avon, Brent, Shepway and Barnsley.

I mentioned significant change before going into rankings because all upturns in cycling are worth celebrating, wherever the authority sits in a largest to smallest list.

Still, here are all the authorities (of any tier) whose ‘any cycling at least once a week’ results come in at more than 20%, each with its standing for 2015-2016 in brackets: 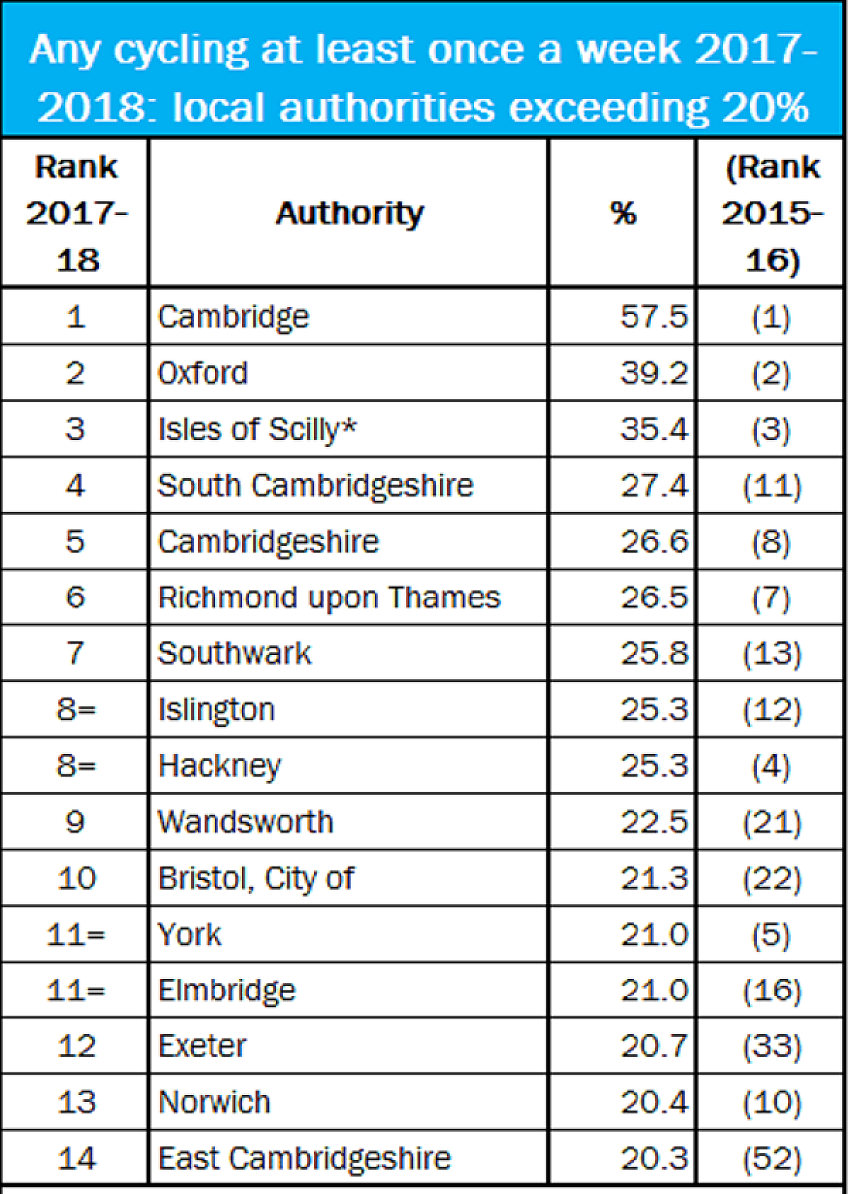 *The sample size is very small.

I feel equally mean missing out the plus 18 percenters (Rushcliffe, Guildford and Chichester), but I’ve just got to stop somewhere. Anything over 11% or so is above average.

Note that Hammersmith & Fulham, which does very well in these standings, is also listed amongst the ‘significant decreases’ above.

As you’ll see from the above, some authorities do very well by cycling, others do very poorly and the difference between the top and bottom ranks is vast.

ALS data can’t tell us why this is and, in any case, many factors may be involved to some degree or other in each council area – demographics, health profile, topography, settlement patterns, the extent of pro-active travel political will, to cite just a few.

Nevertheless, a good many of the places that are doing well have received funding for active travel from central Government, e.g. Cambridge (which, of course, has been famed for many years for its high levels of cycling, as is Oxford). Bristol, York, Exeter, Brighton & Hove and Norwich have also successfully bid for grant money.

That leaves hundreds of other councils having to finance cycling and walking without much central help. Hence our funding campaign which calls for government to provide ring fenced funding for local authorities: take action now!

Do you know something we don’t?

Have you any ideas why your local council is doing well, just ticking along, taking a dive or has never got going on cycling? Do get in touch – I’d welcome your theories.

You may be wondering why the NTS and ALS don’t mirror each other more exactly. The answer is that their methodology and motivation aren’t entirely the same:

Another difference is that the ALS is administered by Sport England, who take a healthy interest in an activity’s ‘intensity’ (e.g. if it made their respondents out of breath). ‘Intensity’, however, doesn’t make its way into the NTS.

I’ve mentioned our funding campaign several times now, and make no apology for mentioning it again.

We must persuade the Government to put more money into active travel so that the levels of cycling in Cambridge and its near rivals become typical rather than exceptional.

Please take action by emailing the politicians who could help turn all these ‘significant decreases’ into ‘significant increases’. It’ll only take a couple of minutes.

Who controls the future of cycling in England in the new Government? View

The cycling revolution that wasn’t View