Tarpaulin to the rescue at a wet al fresco maintenance session
By Cycling UK
Wednesday, 10 October 2012

It was a cold evening session at Leyton Square in Southwark, for People Empowering People Bike Club, but no one seemed to mind. The maintenance session was inundated with keen young people who wanted to fix their bikes or earn a bike for themselves by working on one donated by the local police.

The session was held at the adventure playground outside under a piece of tarpaulin to keep the worst of the rain off.

“The area here on the fringes of Peckham in Southwark is one of very high deprivation” said Nicholas Okwulu, an inspirational leader who helps local young people to help themselves."

Our Bike Club Project helps teach young people how to look after their bikes properly and keep them roadworthy."

“Local young people are riding on bikes that are not safe, or their bike breaks down and it is abandoned. It is a lack of knowledge, skills, guidance and equipment that is holding them back. Our Bike Club Project helps to teach young people how to look after their  bikes properly and keep them roadworthy.“ 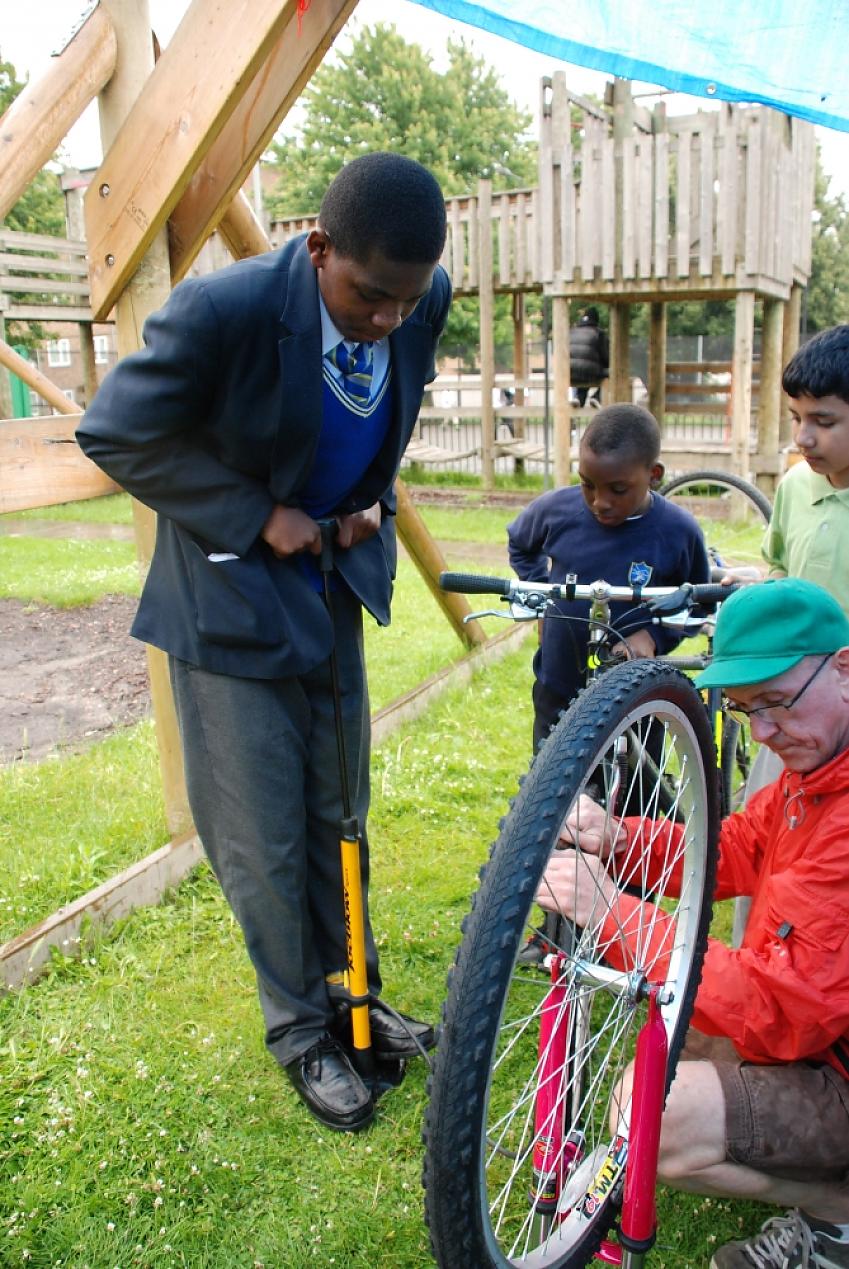 Some young people in  the area would like to ride a bike but they do not have access to a one of their own. The Bike Club allows these young people to work on refurbishing a bike donated to the project by the local police.

According to Nicolas: “If the young person shows commitment by choosing and working on an donated  bike with the help and guidance of one of the bike club leaders, once is it made roadworthy and checked by David who is a  fully qualified mechanic, they are allowed to keep the bike for themselves.”

“I have learned a lot about how to look after my bike by attending the maintenance sessions”  said one Bike Club member. “I don’t have a bike, but I am working on this one and I will be able to keep it once I have fixed everything. I really like this style of bike” said the young person who clearly has a keen eye for a classic touring bike, as he had picked a Dawes Galaxy to refurbish.

The maintenance session was so popular that the Youth Club based at Leyton Square Rec had to wait for the Bike Club to finish so that they could close up!

People Empowering People (PEP or Pempeople) are a Membership Bike Club who have applied for a Bike Club Grant to get training in place for their leaders so that they can expand what they offer local young people. They want to deliver Bikeability training, and led rides as well as basic bike mechanics.

PEP Bike Club are very keen to reach women and girls especially those that do not traditionally cycle or are not able to take part in mixed activities due to cultural restrictions and customs, and with  the aid of the Bike Club grant they plan to  deliver women only sessions to meet this need.