Making Space for Cycling: a conference of campaigners

Campaigners from around the country met in Leeds to discuss Space for Cycling
By Chris Peck
Tuesday, 6 May 2014

Making Space for Cycling: a conference of campaigners

Over 70 campaigners from around the country met up in Leeds for the first Space for Cycling campaigners conference on 3 May.

There were some fascinating presentations - do have a read. The following summarises some of the highlights.

Rachel Aldred, an academic from the University of Westminster and board member of the London Cycling Campaign, discussed the virtues of that most prosaic of features: the humble bollard. Deployed strategically (and clearly visible!) bollards restrict motor traffic and reduce rat runs, while  making cycling conditions better.

She outlined examples from Hackney - where the removal of motor traffic from back-streets has created an excellent direct cycle route to central London - and proposals to remove traffic from Primrose Hill. Outside London, however, political will to remove motor traffic is not as common.

Mark Treasure, whose excellent As Easy As Riding a Bike blog dissects British and Dutch cycle infrastructure planning and politics, attended the conference as a representative of the Cycling Embassy of Great Britain. Since its formation, CEoGB has been pushing for the highest standards of cycling design.

In his workshop on protected space on main roads, Mark explained how Dutch principles for cycle planning work, including contrasting them to British practice, such as in his home town of Horsham, where the town centre is dominated by a largedual carriageway road, Albion Way. 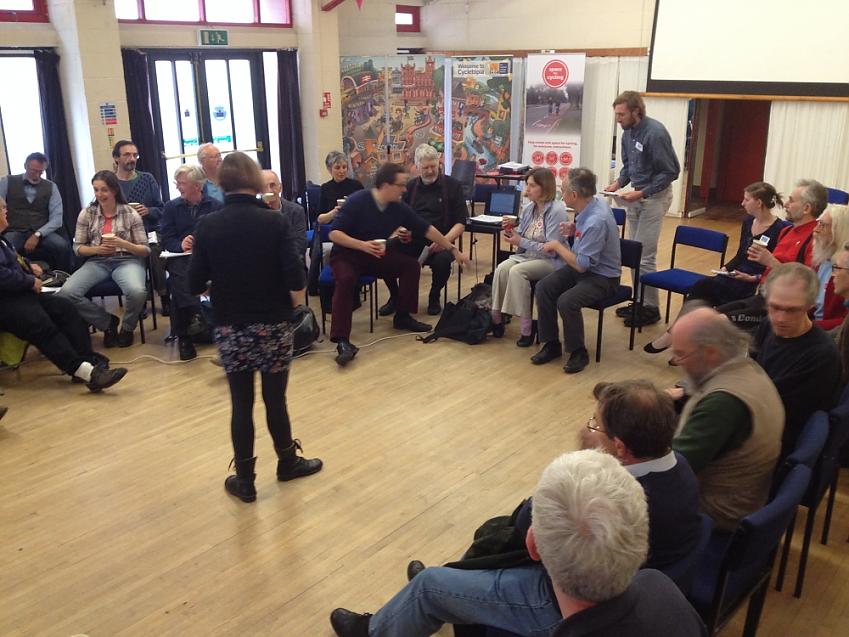 Despite traffic falling from 30,000 vehicles per day to less than 20,000 in ten years, West Sussex County Council aren't prepared to make protected space for cycling on this main road, and instead spent sustainable transport funding to speed up motor traffic, and put a handful of advanced stop lines on junctions - a very long way from designing facilities to create mass cycling conditions.

He explained that the barriers to doing things well in Britain aren't necessarily because of a lack of technical standards, and may be more to do with the political will and money. It's the latter which the Dutch have in spades, and which Space for Cycling is aiming to build.

Campaigners were treated to workshops on social media from the excellent Leeds Cycling Campaign, mainstream media, influencing councils and building stronger campaign groups. Katja Leyendecker from the CTC-affiliated Newcastle Cycling Campaign challenged the campaigners to think 'cycling' rather than cyclist. The day ended with a rousing call to action from Bristol Cycling Campaign's Eric Booth to create Space for Cycling wherever you are.

If you missed this conference, don't worry: further training events will be run elsewhere in the country over the coming months. If you've signed up to the Space for Cycling campaign and contacted your councillors we'll be in touch over the summer with dates and locations in due course.

In the meantime, campaign groups are organising Space for Cycling 'Big Rides' on Saturday 17th May in London, Newcastle, Manchester, Leeds, and Sheffield. Do join your local ride, or, if you can't, support the Big Ride Thunderclap!