At a conference on road maintenance this week, Chris Peck explained the dangers faced by cyclists from poor road maintenance, and suggested that savings could be made by doing more to factor in cyclists needs when resurfacing.

By combining local transport projects with regular resurfacing, considerable cost savings could be made, I told the conference delegates at the Future of Highways North.

This is standard practice in many parts of the world, but the simple process of connecting up the road maintenance side of councils' work, with the improvement side sometimes seems to evade us here in the UK.

Recently a highway engineer I met explained that plans to build a cycle route on a major road had to be halted by councillors, because the road had been resurfaced just months before and they didn't want to look stupid authorising the digging up of a road resurfaced a few months previously. A bit of joined up thinking could have saved money, and improved things for cycling.

When the gasman comes to call

Similarly, local authorities could be doing much more to ensure that work conducted by utility companies improves the road network. Too often trenches cut in the road for gas, water or electricity works result in very poor reinstatements that are uncomfortable to cycle over and weaken the road, leading to more potholes forming.

It doesn't have to be this way: utility companies are obliged to reinstate the road to the standard they found it in and local authorities can reject inadequate repairs. Sadly many local authorities allow poor reinstatements - even though they then have to pay to fix the potholes that almost inevitably form.

Another speaker at the conference - a materials specialist working on the most effective way to fix potholes - suggested that, in his experience, around 80% of the refilled trenches were in some way below the standard they should be.

The risks to cyclists

Much of my presentation focused on the ways in which cyclists were exposed to risk from potholes, explaining why CTC set up fillthathole.org.uk - our pothole reporting system - and how we hope that it will help local authorities to identify the worst parts of the network.

Many cyclists are seriously injured in crashes with potholes and around one in ten of the legal reports handled by CTC's legal services team, Slater Gordon Lawyers, start with a road defect.

Invest to save, or fix holes now? 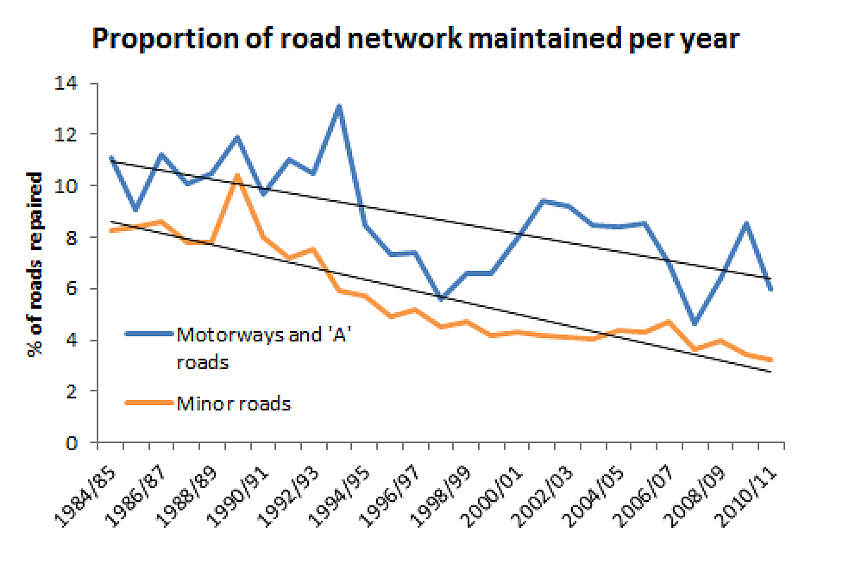 However, local authorities are in a bind.

The money they have to spend on maintenance has been falling, but the number of potholes are rising, and with them the costs of compensation.

However, many local authorities feel that they could resolve the pothole problem if more was spent on the former, and less on the latter. This would mean more roads would be resurfaced or sealed, preventing water penetrating the surface and leading to potholes forming - thus reducing the short term costs in the future.

They have a good point. The evidence shows that the proportion of roads that are resurfaced or sealed has massively declined over the last 20 years: from a height of 10% of local roads in 1989/90, to just over 3% last year (see above). It is the weak state of the roads thanks to decades of under-investment which has resulted in the recent harsh winters causing so many potholes to start with.

The Government's Pothole Review, on which CTC was represented, suggested that, with diminishing resources, local authorities would need to find huge savings in road maintenance. Most local authority figures freely admit that savings can be made, with some pointing out that the costs of civil engineering is far higher in the UK than elsewhere, suggesting that somewhere, someone is raking off too much profit.

Still, CTC has written, along with other transport organisations, to the Chancellor, asking for a dedicated road repair budget to help overcome the immediate budget shortfall. In the longer term, if we want to have pothole free - and smoother - roads, local authorities will have to increase the number of roads resurfaced regularly. In doing so, they should build in infrastructure for cyclists at the same time.