Alcohol and the law - which road users are worst?

A police officer carries out roadside checks but probably not on cyclists
By Chris Peck
Thursday, 19 April 2012

Alcohol and the law - which road users are worst?

Drunken cycling is an offence and a very bad idea. But is it much of a road safety problem? Police enforce some traffic laws, but seldom drunk cycling. CTC examined data for 5 years to see how many fatalities involve alcohol and cycling in this country.

For some months I've had an irregular correspondence with a Polish cycle campaigner who relates that the police treat drunk cycling under the same laws as they treat drunk driving.

In Poland - as with most of the rest of Europe - the legal blood alcohol limit is far lower than in the UK: you can be fined at over 20 mg/100ml of blood and jailed at 50. In the UK the limit is still 80, despite a recent report recommending reduction to 50.

Incidentally, in this country the legal limit is imposed only on motor vehicle operators - an offence of 'cycling when under the influence' exists, but evidence of this can only come from the opinion of police or witnesses, not a breath or blood test.

According to my contact in Poland, the police crackdown on drunk cycling heavily, and he maintains that there are more drunk cyclists in prison than drunk drivers.

He also pointed me to German data from 2010, which provides some startling figures - almost 5% of cyclists injured there were under the influence of alcohol, compared to just 2.5% of drivers. However, cyclists are subject to a higher legal limit (160 mg/100ml blood) than drivers, so more of those people would, technically, be riding legally. Cyclists are, however, more likely to have very high levels of alcohol with almost a quarter of all drunk cyclists having between 200 and 250 mg of alcohol per 100ml blood.

So is drunk cycling a serious problem in Britain that we are failing to detect?

Even more interesting are figures from coroners, who investigate the blood alcohol levels of the victims of fatal crashes: 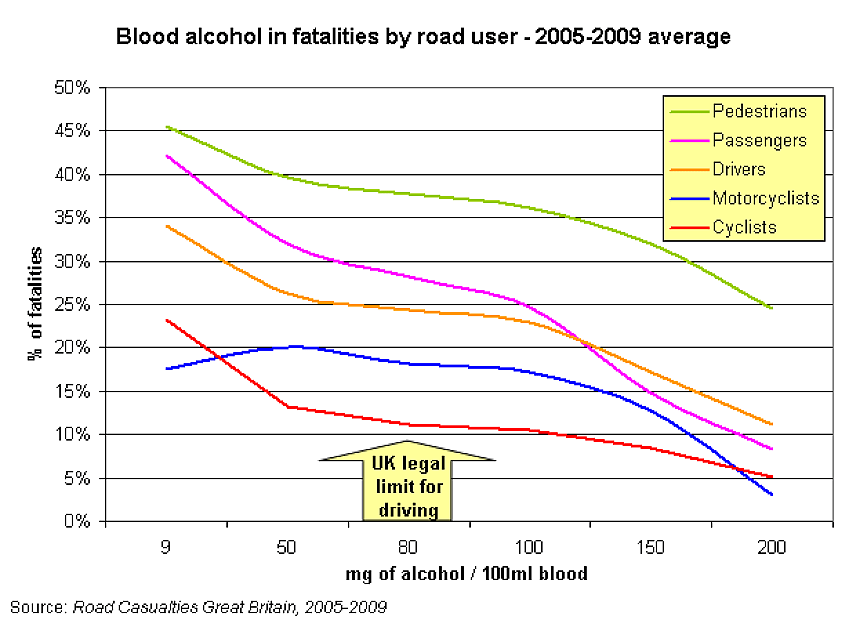 This graph shows that of all fatalities, cyclists are the road user group that have consistently the lowest level of blood alcohol at the legal limit and are generally the lowest, with the exception of motorcyclists at 200 mg/100ml whereas almost a quarter of dead drivers were found to be over the limit.

Of course, this isn't an invitation to go out, get smashed and then try and cycle home - remember that riding drunk is still an offence and can put you and others at risk.

However, it seems sensible that drunk cycling doesn't receive the amount of enforcement activity as drunk driving, and I'd much rather potential drink drivers went by bike (where they were unlikely to put others at risk) than by car.