Cycle serious injuries have been rising as fast as cycle use in recent years
By Chris Peck
Monday, 2 July 2012

A closer analysis of cycle casualty data suggests one possible explanation lies in the weather in 2010. Unfortunately, determining risk without good data on cycle use continues to be problematic.

In 2011 serious injuries to cyclists rose by an astonishing 16% in one year. That follows a smaller but still alarming increase in 2010, and is the 7th year in a row that serious injuries and deaths have risen for cyclists.

So what is going on and what has happened to 'safety in numbers'? Although for many years cycle use has been increasing while cycle injuries fell, the last five years have seen both rising at similar rates. The graph above shows cycle use and casualties, indexed (ie, turned into percentages) based on three year averages, starting in 1996.

CTC's Safety in Numbers campaign has been criticised for claiming that all we need do is increase cycling levels in order to improve the safety of cyclists. Of course, this was never what CTC said. Our argument was that local authorities should measure risk, not just numbers of injuries.

We also said that "to get more people cycling, and make cycling safer, the Government and local authorities need to take a wide range of actions."

Those actions we suggested local authorities take were listed under the following three headings:

2. Improve the road environment and make it welcoming and safer for cyclists (through lower speed limits and tackling lorries)

Unfortunately, the last few years have not seen significant progress on any of these three areas.

I would even argue that things are getting worse. In early 2011, safety cameras were switched off temporarily in many areas, due to dithering over funding by the Government. Consequently, the proportion of vehicles driving over the speed limit in 30 mph streets rose in 2011 after years of decline. Traffic policing levels have reduced dramatically, with some police forces abandoning dedicated traffic police entirely.

Cycling England's programme of promotion and cycling infrastructure ended when the Department scrapped it. The much vaunted 'Local Sustainable Transport Fund' (LSTF), which was supposed to replace Cycling England, has only just started disbursing funds.

So what other explanations are there for the increase in cycle casualties?

But a closer examination of the data suggests that there is a grain of truth here.

2010 had both a very cold January/February and an even colder and snowy November/December. December of that year was the second coldest since records began 350 years ago. The following graph shows the 3-month average temperature anomaly (against the 1970-2000 mean) for the four quarters of 2010 and 2011. 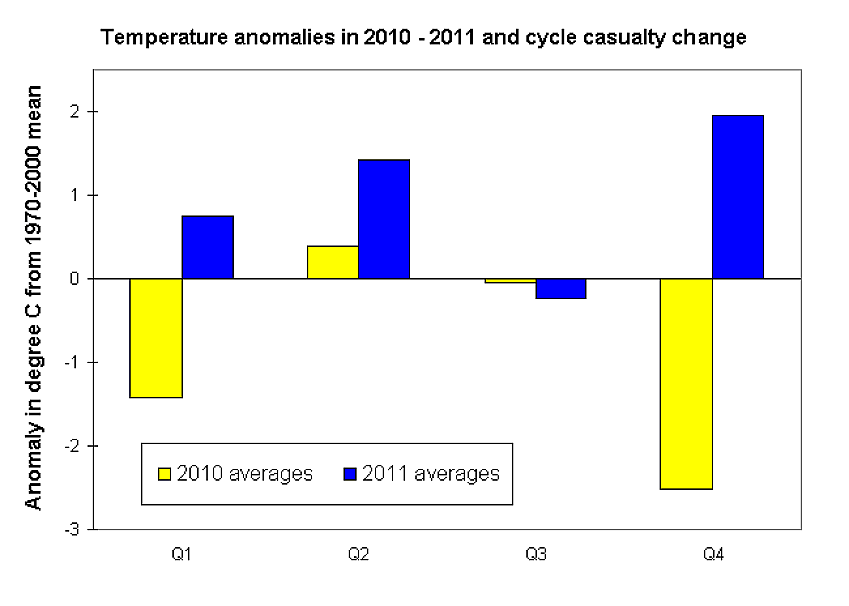 It is highly likely that the record-breaking cold (and snowy) weather in 2010 led to suppressed cycling levels in the first and last quarters of 2010.

The greatly reduced levels of cycling (and driving) led to fewer collisions. Consequently when traffic returned to normal in 2011 the figures for cycle collisions leapt up correspondingly. 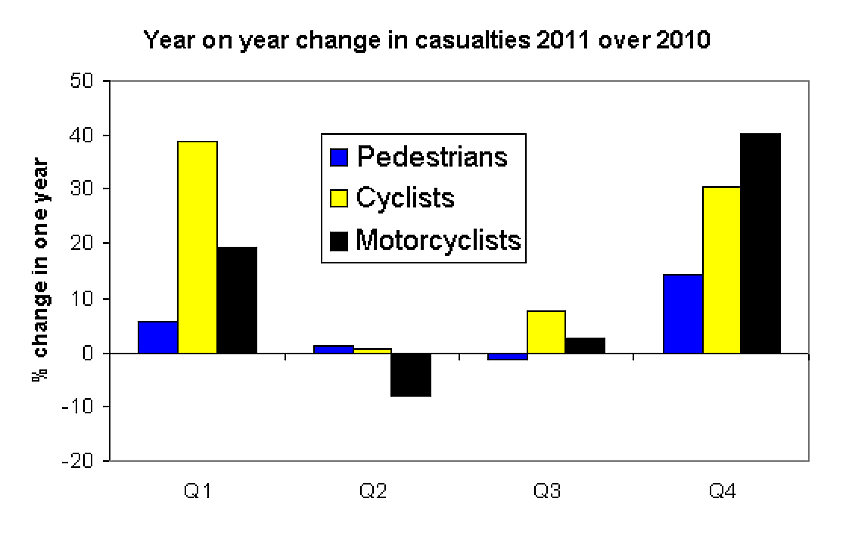 Unfortunately, although usage data is published on a quarterly basis for motor traffic, data for cycling is too unreliable to be similarly released. We therefore do not know exactly how great the reduction in cycle use was in the first and last quarters of 2010, nor therefore how great was the rebound in 2011.

There is some evidence from London that suggests that January 2010 and December 2010 did see a particularly low levels of cycling on the main road network.  In the following graph these periods are the two deep troughs towards at the end of the 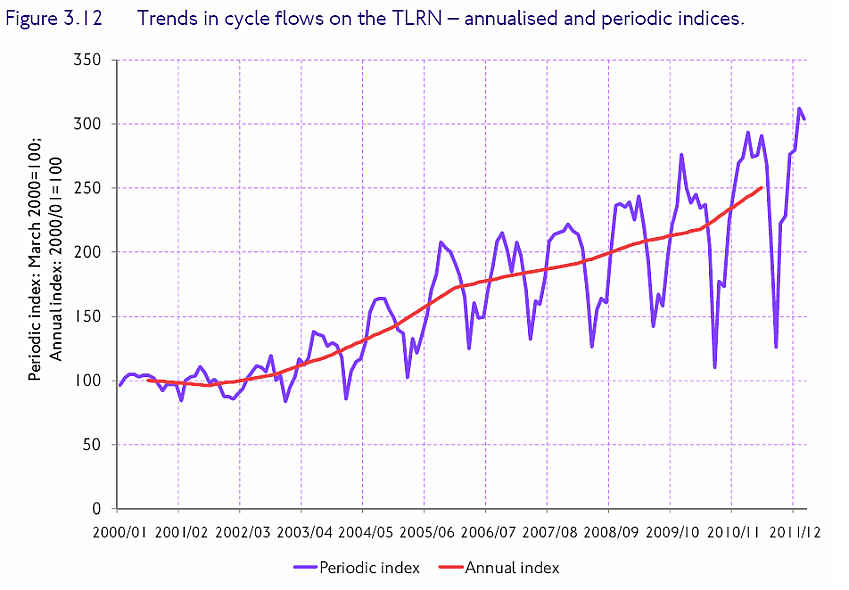 It's time for the Government to start taking road danger reduction seriously. Currently the Minister responsible often claims to have the 'the safest roads in Europe', an accolade - soon to be lost - that in any case applies only to motor vehicle occupants, not cyclists or pedestrians.

Meanwhile, without a better understanding of how much cycling (and walking) is taking place, and when, we are left speculating about the exact scale of the increase in risk to these most vulnerable of road users.