Biking when you are feeling blue

Cycling UK continues to support the UK to cycle
This remains true during this difficult period with the ongoing threat of coronavirus Covid-19
Read our latest advice on cycling
Sam and Ned lunching on their bikepacking trip through Tuscany. Photo Sam Jones
By Sam Jones
Friday, 8 November 2019

Biking when you are feeling blue

Many people attribute mental wellbeing benefits to cycling, particularly off-road. Cycling UK's Sam Jones is one of them, and talks about how heading into the woods on two wheels has helped him out.

“Nope, I’m not going any further on this,” I say as my wheels grind to a halt on the sandy slopes of Yagden Hill in Hankley Common.

Looking down hill in the darkness, I can see waggle​ of Keir’s light as his front wheel is directed by the sand’s will rather than his. Keir is my friend and colleague and we're on an after work off-road adventure.

Pretty soon we’re both pushing our bikes to the summit, where we pause to take in the view.

It’s night so we can’t really see much apart from silhouettes of faraway hills and headlamps carving their way through a landscape drenched in black.

Peace reigns over the Surrey Hills, and as we chat our voices barely register above a murmur, almost as if we don’t want to disturb the tranquillity.

The cold begins to seep in, we mount up and weave down the sandy slope and through the woodland until we emerge from the treeline outside the Three Horse Shoes in Thursley.

Any concerns of the day have been washed away on the trails, I’ve lost them in the mud.

Any concerns of the day have been washed away on the trails, I’ve lost them in the mud and they’ll not catch up for a long while.

Ask me why I like heading off-road on my bike, and my immediate answer will come with a smile and an elaboration on how fun it is. However, if I delve a little deeper, my response goes beyond pure enjoyment, and on mental medicinal benefits it has.

Cycling UK’s Rides of Way report shows I’m not alone in my thinking. 91% of the 10,400 people who responded to the survey rated off-road cycling as important for their mental wellbeing.

It’s easy to understand why. I don’t think there’s ever been a time when I’ve headed off on my bike, storm clouds threatening my mood and not seen metaphorical blue skies by the end – even if the same couldn’t be said about the real weather!

When my father suddenly passed away earlier this year, I was left lost, adrift, numb to the world. My family and my partner Daria were invaluable in their support. They were understanding in what I needed to do to get through this - I needed to go out and ride my bike.

So I headed out for a planned three-day bikepacking trip through the Tuscan Hills with my good friend Ned. By the end, well, I wasn’t better but the break from grief had made a difference.

The numbness had dissipated and I had rediscovered laughter. Navigating my way by bike from Siena to Florence along the firetracks and trails of Chianti,  I’d found my way onto the path to coming to terms with my loss. 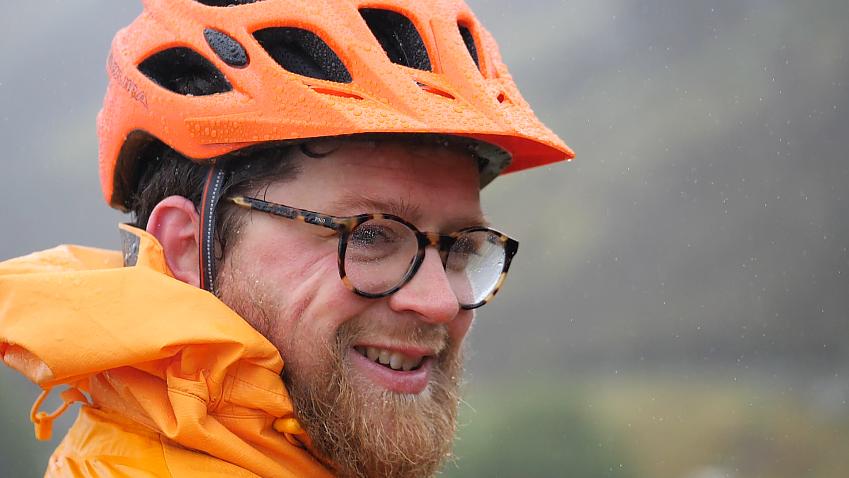 Of course, you don’t have to cycle off-road to get these benefits. You might find the same comes from heading out on a road ride or going for a walk. Sometimes it’s just the benefit of being outside and being active which is enough.

For me though, it’s cycling’s ability to take me deep into the countryside, literally away from it all, that is important.

It’s easy to be entranced in the rhythmic steady pedalling, to find distraction in picking your way down a technical trail and exhilaration in clearing it without a tumble (rare for me).

It’s about the joys of riding solo or having a laugh with pals. It’s about putting aside the serious and finding the fun.

Off-road, the view from the saddle will be one of the finest you’ll ever encounter. It will take your breath away (hills are much harder work when the surface isn’t tarmac!) and leave you gasping for more.

I’ve always been a lover of the outdoors and finding the wilderness that is close to home if we know what to look for. In heading off-road on my bike though I’ve seen more in two years than in 30 years on foot.

I’ve been accompanied on rides with the silent swoop of owls grazing the halo of my light, badgers bustling along in the undergrowth and more foxes and deer than I could possibly count. There’s no need to get your dose of British wildlife from Springwatch when you have a bike.

Familiar trails change with the season, and each ride will reveal some new secret sight so long as you look up from your handlebars. The worries of day-to-day life fade away in such settings, and while they might return later, the ride brings respite and perspective.

Over the years, I’ve learned cycling will not provide the whole answer to life’s troubles, but it can do a good job at making them more manageable.

Tucking into a hearty pizza in the pub, Keir and I turn to the serious talk of the route ahead, where we’ll bivi later that evening, and whether a second beer would be OK (it wouldn’t – but a half might).

Heading out into the cool night to collect our bikes -  work, worries and everything else can wait: now it’s time to ride.

Watch a video of one of Sam's bikepacking adventure.

Other charities offer help and support when you are feeling blue. Contact Mind for information on mental health, Cruse Bereavement Care offer help and advice about dealing with grief or call the Samaritans if you want to talk.