Cycling UK continues to support the UK to cycle
This remains true during this difficult period with the ongoing threat of coronavirus Covid-19
Read our latest advice on cycling
Sam "bivi-no-mates" Jones enjoys a cup of tea first thing in the morning. Photo: Sam Jones
By Sam Jones
Friday, 22 February 2019

Cycling UK’s Sam Jones is continuing on his ambition to spend at least one night outdoors each month of 2019. In his February outing, he wonders why no one else wants to join him…

Last Tuesday was the birthday of Cycling UK’s off-road guru, Julie Rand. A memo had gone round all staff the week before seeing who was up for a night ride into the Surrey Hills with the bday girl, and I immediately signed up along with a number of other colleagues.

Julie’s night rides are famous within the office for taking the riders on little known trails that link up with top pubs while avoiding the worst of the mud (usually) and are great fun. So far everyone who has gone on one has come back for more – and you can see why if you read Julie’s thoughts on what makes night rides so special.

In the end six of us said “Count us in” – of whom two I thought were prime candidates for combining a night ride with a pleasant rest beneath the stars, and when asked they both said, “yes” too.

And why wouldn’t they?

Bluebells are beginning to pop out, daffodils are starting to bloom and I’m getting hay fever earlier than ever before…all of which makes it perfect weather for a microadventure.

Down in Surrey, for the past two weeks it’s like February has forgotten it’s winter and jumped straight into mid-spring! Bluebells are beginning to pop out, daffodils are starting to bloom and I’m getting hay fever earlier than ever before…all of which makes it perfect weather for a microadventure.

As I wheeled my bike into the cycle shed at work, I could see my companions’ bikes locked securely to the Sheffield stands. Both lacked any suggestion of luggage suitable for a night out.

Cycling UK's Sam Jones is aiming to spend a night outdoors with his bike and his bivi at least once a month for 2019. There's nothing like the fresh air and freedom of a #microadventure to make you feel rejuvenated - though some friends to accompany you would be nice! #bikepacking #cycling #bivi #bikepackinglife #cyclingaddict #fridayfun #fridayfeeling #outdoors #wildcamping

They gave the usual excuses: “I won’t sleep very well” and one which is sort of fair enough, “I don’t have the right luggage”, leaving me yet again as Julie said, “bivi-no-mates”!

Flying past Guildford’s rush hour traffic as the sun began to set, Julie set a route which took us along some of the best sections of the Surrey Hills loops through Puttenham and Elstead Cycling UK had launched last summer.

Having made it my mission to ride these loops this year and having ridden two recently, for once I wasn’t just a tag along rider, but was able to provide some intel about fallen trees on steep ascents here and quagmires there. I was still hopelessly lost without my guide half of the time, but at least I was more useful than normal.

Halfway through the night ride however, their tunes had changed and I was hearing how great it would be to stay out tonight. I took this all with a pinch of salt though, putting it down to Julie’s excellent route setting skills and the much needed pizza at the Three Horseshoes in Thursley which had set up the evening perfectly, rather than the prospect of bivi-ing out with me.

We all parted ways around half 10 wishing Julie many happy returns and thanks for the ride, and I set off in hunt for a spot to lay my head for the evening.

I do appreciate why most people aren’t enticed by the prospect of spending a work night out in a plastic bag. Put like that, it’s not especially appealing.

I do appreciate why most people aren’t enticed by the prospect of spending a work night out in a plastic bag. Put like that, it’s not especially appealing. Couple that with the potential for a sudden British weather change and memories of negative camping experiences from the past, most people’s reluctance to camp out in February is perfectly understandable.

There’s the automatic assumption the night out will be uncomfortable, you’re slumming it, and sleep will be hard to find and capture. When there’s a warm bed and roof already available, why wouldn’t most people think this?

The only issue I’d have with this is that I’m no different. When I head out to camp or bivi out, even though I’m going on a “microadventure” that doesn’t mean I don’t want to sleep well and be comfortable too – particularly if the next day I’m heading back into work.

“A microadventure is an adventure that is short, simple, local, cheap – yet still fun, exciting, challenging, refreshing and rewarding”, writes Alastair Humphreys who originally put a name to the concept. There’s nothing there about having to endure discomfort! 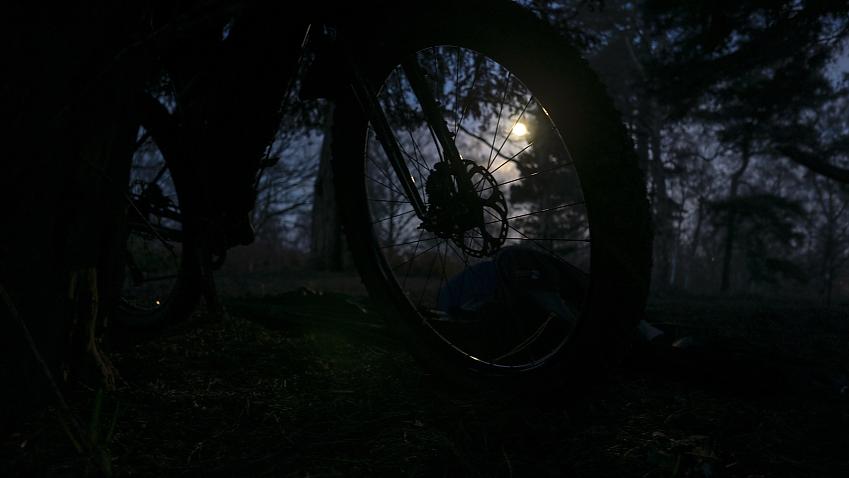 The full moon at dawn viewed through a bike wheel. Photo Sam Jones

It’s part positive attitude that you will be OK sleeping outside, and part having the right kit – which for a good night out is really a decent sleeping mat to insulate you from the cold ground and a comfortable sleeping bag for the time of year you’re out. Bivi bags, tents and tarps can come later and hopefully be borrowed in the meantime.

It also helps when out on a work night exploit to have a destination in mind, as that saves the faff of finding a place to rest in the dark, which is rarely fun or easy.

I did find returning to the same Surrey hilltop I had rested on during my January night out lessened the sense of adventure and excitement, particularly when I ventured over to the far side and discovered there was a whopping great big mansion rearing above the hedgeline at the bottom of the hill. I was sure that hadn’t been there when I had camped in the snow…

Being familiar with the location though meant I was able to head to a soft sheltered spot beneath a pine tree and set up camp in no time. The other benefit of knowing the location also meant my task, set by Cycling UK’s new video producer, Robby Spanring of filming my microadventure was that much easier, as I knew more or less where I could place our GoPro camera for the shots he wanted.

The filming meant I finally crawled into my sac after 1am, which was when I discovered that my old faithful Vango sleeping bag of some 24 years, had finally had enough as the inner lining separated from the outer and out spilled the warm filling.

I slept fitfully, but still woke in time to capture the dawn shots at 6am as requested and have a couple of brews of tea in the meantime with the slice of cake I’d packed, all the while enjoying the slow glow of the dawn as it enveloped my side of the hill. 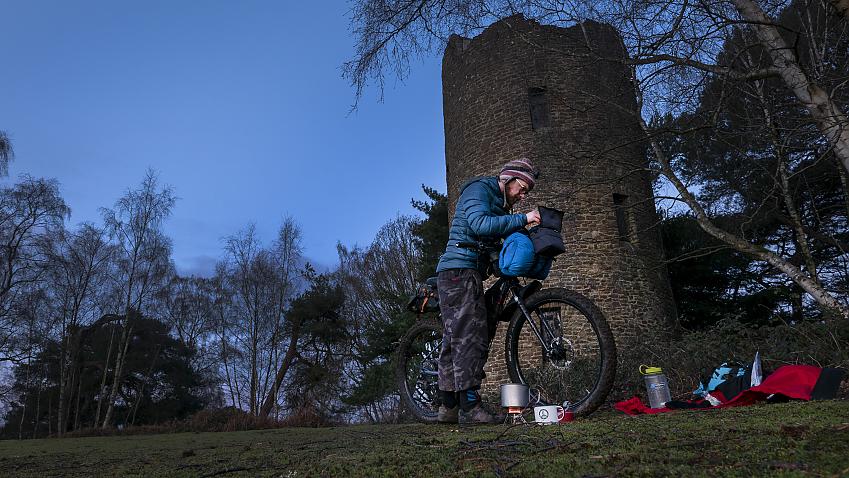 "All packed up, I jumped back on my bike and whizzed off down the hill on my commute." Photo Sam Jones

Filming done to the best of my ability and all packed up, I jumped back on my bike and whizzed off down the hill on my commute – never has the road to work been so sweet!

Back in the office, tired in body but fresh in spirit, I hope I might have convinced some of my colleagues to join me on my next outing in the UK…and if you’re still reading this, hopefully you might consider heading out too for a midweek microadventure by bike…

If you've been inspired by Sam's microadventures and are heading out to do the same, then Cycling UK would love to see your pictures - just copy us in on your Instagram posts! 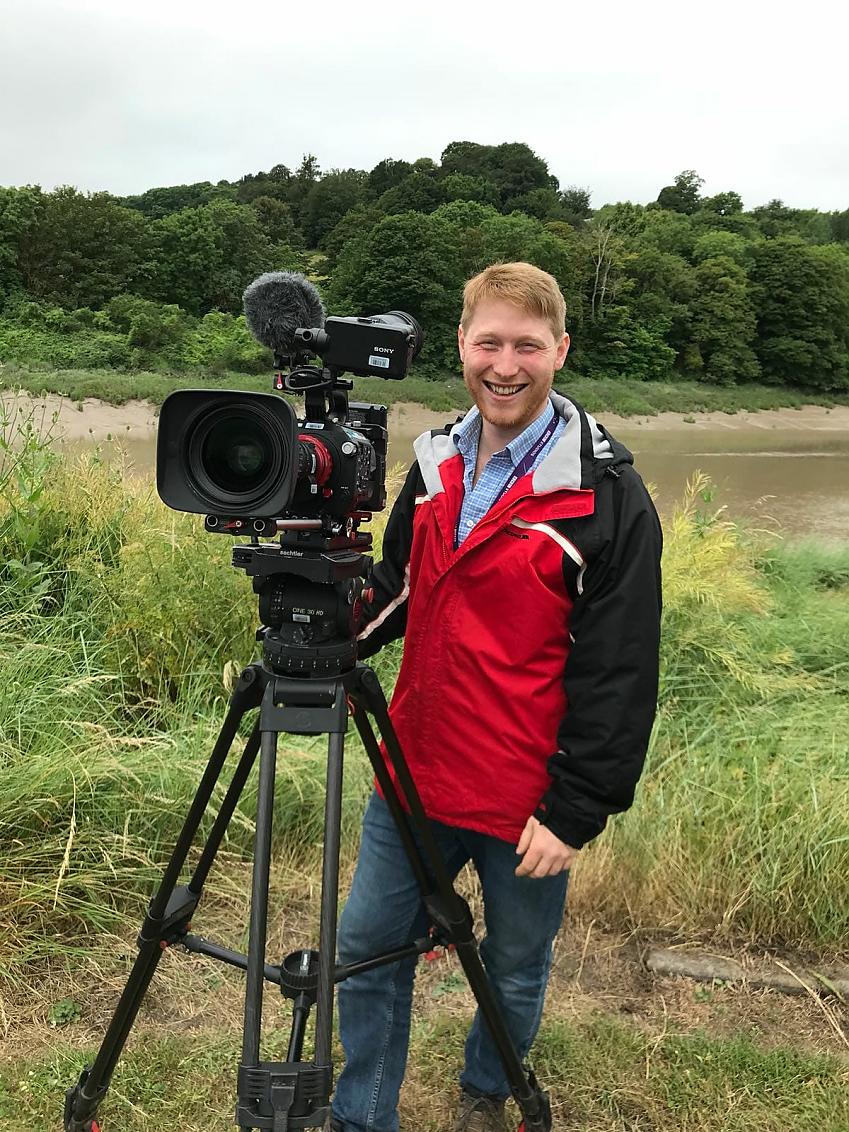