An abject failure to fund cycling and walking

An abject failure to fund cycling and walking

A Conservative manifesto that pushes funding for cycling and walking off a cliff. Cycling UK’s head of campaigns Duncan Dollimore explains the abject failure to provide the investment needed, and looks at which MPs have pledged to support increased investment.

This morning the new Prime Minister Boris Johnson pledged to make the country “the cleanest, greenest on earth”. Fantastic, but how?

Reducing car dependency, particularly for short journeys, is one of the obvious answers, but that requires investment to enable more people to ditch the car and walk or cycle instead.

I was hoping to see something in the Conservative manifesto which reflected this, but there was an abject failure to include anything.

2% of transport spending on cycling and walking

Before looking at what was, and wasn’t in the Conservative manifesto, it’s worth just reflecting briefly on current levels of investment and what some of the other parties committed to.

Working out exactly how much is spent on cycling and walking throughout the UK can be a smoke and mirrors exercise, further complicated by the fact that spending on active travel is a devolved matter for the respective governments in Scotland, Wales and Northern Ireland, and in England funding within London is essentially a matter for the Major and Transport for London.

Current spending on transport in England however (excluding London), by both local and national government, amounts to around £15.2bn, around £300m of which is allocated to cycling and walking. That’s a fraction under 2%.

Targets are a pipe dream without more money

Levels of funding do vary across the devolved nations, and are slightly higher in Scotland, but they’re woefully inadequate everywhere if politicians are serious about getting people out of cars and a modal shift to active travel. 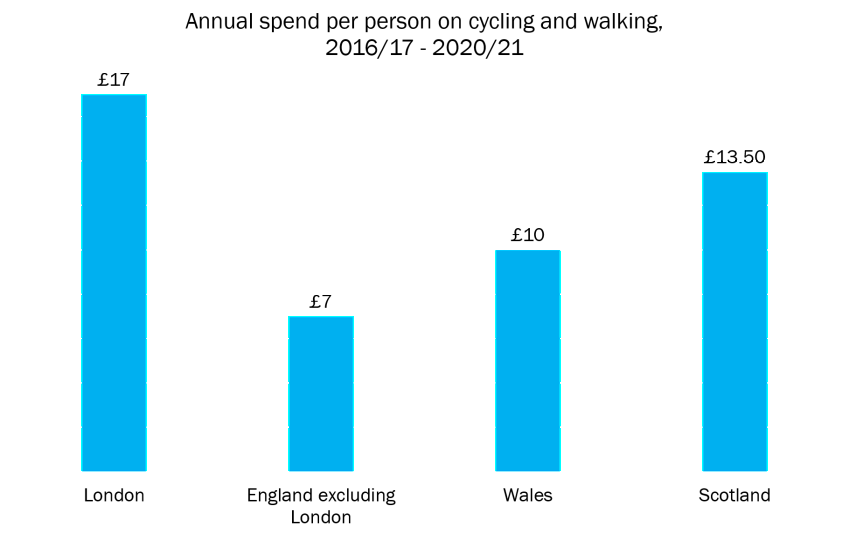 In England, the targets for doing this are set out within the Government’s Cycling and Walking Investment Strategy (CWIS) and include doubling cycling trips by 2025. A pipe dream given current levels of investment, which former Transport Minister Jesse Norman MP admitted in May when confirming that levels of investment would need to double or more if the Government is to reach its CWIS targets.

At least 10% of transport spending is needed

But with around £7 per head being spent each year in England (outside London) on active travel, how much more is needed?

Well, research commissioned by the Department for Transport has still not been published, but Cycling UK understands that the Transport for Quality of Life report will confirm that, with some variation dependant on how, where and on what the money is spent, there needs to be an immediate doubling of investment in active travel, and then another doubling, for the Government to have any chance of achieving its CWIS targets.

While that research relates to targets in England, investment in active travel at a similar level is urgently required across the devolved nations to make cycling and walking the natural choice for short journeys throughout the UK. That’s why in our Election 2019 campaign we asked all candidates to stand up for cycling and walking, and pledge to support increased investment in active travel to at least 5% of transport spending next year, increasing to at least 10% within five years.

On current levels of transport spending, that would mean ramping up investment to at least £34 per person annually by the end of this parliament.

Labour’s manifesto committed to increase the funding available for cycling and walking. with further details outlined in a subsequent press release confirming that capital investment would amount to £4.7 billion over five years, in England, with total annual spending in England on active travel increasing to £50 per head.

Meanwhile the Liberal Democrats committed to introduce a nationwide strategy to promote walking and cycling, including the creation of dedicated safe cycling lanes, increasing spending per head five-fold to reach 10% of the transport budget.

The Green Party committed to a Green New Deal for transport, spending £2.5 billion a year on new cycleways and footpaths.

The devil is always in the detail, but it has to be acknowledged that all three parties pledged to significantly increase funding.

Incredibly, the conservative manifesto didn’t promise an increase, or to maintain current investment. Instead, it set out plans which would slash the money spent.

Their manifesto promises a new £350 million Cycling Infrastructure Fund, but the separate costing document confirms that this is spread over 5 years, at £70 million per annum. Whilst this is admittedly just a cycling infrastructure fund, there’s no further reference to funding for walking in the manifesto. If there’s nothing else, that would be mean reducing spending to a quarter of the current level.

This isn’t just a long term crisis either, because currently there is absolutely zero money earmarked for local authorities for cycling and walking infrastructure for the year from April 2020 onwards.

Cycling UK Chief Executive, Paul Tuohy, said: “This would open up a chasm between what has been promised and what is actually needed.

“The Conservative manifesto commitment would see the current £7 per head current being spent on walking and cycling in England, outside of London to just £1.55 per head.”

Making the country “the cleanest, greenest on earth”

So just how does the Prime Minister expect to fulfil his promise made this morning, whilst taking an axe to active travel funding?

Cycling UK Chief Executive, Paul Tuohy, said: "This would be an abject failure by this incoming government to address the climate, air pollution, congestion and inactivity-related health crises the country is now facing.

"That’s why we will be writing to Boris Johnson demanding an urgent re-evaluation of his party’s spending pledge if he is truly serious about making the country ‘the greenest, cleanest on earth'."

This would be an abject failure by this incoming government to address the climate, air pollution, congestion and inactivity-related health crises the country is now facing.

Did your MP make the pledge?

We can’t stand by idly and watch cycling and walking provision further eroded by a lack of central government funding, so we’re also planning to meet with all those MPs who responded to our emails and yours, pledging to stand up for cycling and walking.

A total of 664 candidates made the pledge to support increased investment in cycling and walking to at least 5% of transport spending next year, increasing to at least 10% within five years, however only 44 of these were elected.

You can find out if your MP took the pledge using our spreadsheet. By political party the pledges were: 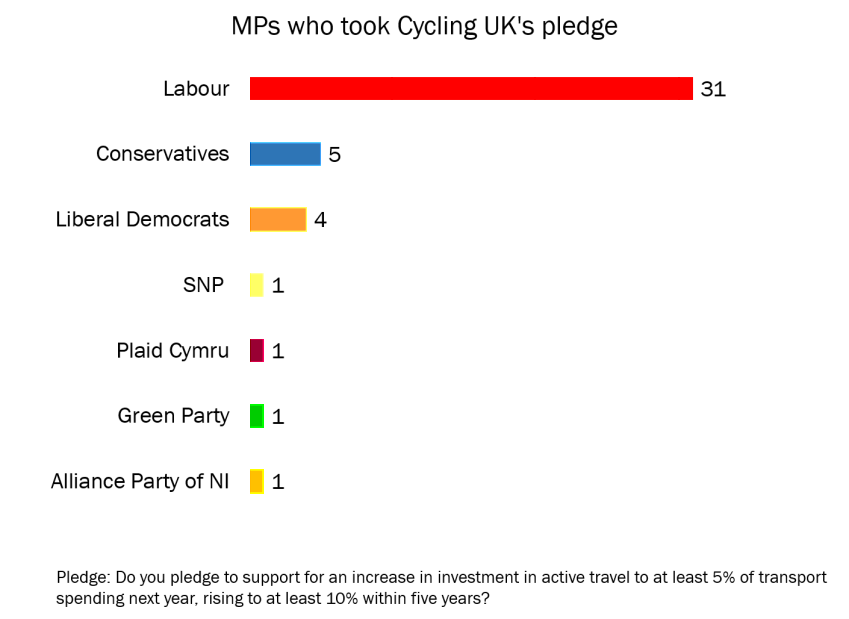 We’ll also be contacting other MPs who replied expressing support, but without making the pledge, but we’re going to need your help.

In the new year we’ll be looking to hold both individual MPs and their parties to account for their pledges, indications of support, manifesto commitments, their targets to increase cycling levels, and their assurance that they’re serious about tackling climate, air pollution and other crises.

We’ll be providing guidance, information and support to help anyone who cares about getting more people cycling and walking to raise their concerns with their MP. The Conservative manifesto threatens to push funding for cycling and walking off a cliff, so we’re going to need your help to make our voice heard!

The battle’s not over

Huge thanks to everyone who supported our Election 2019 campaign and our previous Funding  for Cycling and Walking campaign.

The battle’s not over, and we’ll let you know more about what we’re going to do and how you can help in the new year.

Getting more people cycling and walking by reducing car use View

Stand up for Cycling and Walking View

Conservative manifesto on funding for cycling and walking

I think Duncan Dollimore's comment that the "Conservative manifesto ... pushes funding for cycling and walking off a cliff" is unhelpful. I have no brief for the Tories, having spent several weeks working hard to try and get rid of my local Tory MP. However there is a difference between a lack of acknowledgment of issues (accompanied by a meagre proposal) and an active intention to cut. It hardly seems a good approach for Cycling UK to promote this belief among supporters which may put up barriers when approaching Tories for support, as no doubt we will want to do over the next few years. No doubt if asked the government may say no plans to cut, and that may be because they don't actually plan to cut.

I disagree with Paul_H. Duncan Dollimore is being honest about the Conservatives' published plans, and I believe that is the right approach.

On the issue Paul raises of 'an active intention to cut', it is answered in the article. "[C]urrently there is absolutely zero money earmarked for local authorities for cycling and walking infrastructure for the year from April 2020 onwards."

I just don't believe that keeping quiet, hoping to curry favour with the Conservative Party, is the right strategy, or a strategy that would work.

The role of organisations like Cycling UK is to point out the facts without fear or favour, and to make the case convincingly for far more investment than is currently promised. That's what Duncan D is doing.

Cycling UK continues to support the UK to cycle
This remains true during this difficult period with the ongoing threat of coronavirus Covid-19
Read our latest advice on cycling
Sick of being close passed by drivers?
Please donate to help us drive down dangerous driving by equipping police forces to run driver education programmes
Donate