Why do we need more traffic police?

Why do we need more traffic police?

This article explains why Cycling UK believes that traffic policing should be strengthened both to deter irresponsible behaviour by road users, and improve the quality of road crash investigations.

Evidence clearly shows that investing in roads policing is a highly effective way of promoting road safety. This is largely because the fear of detection and prosecution deters people from behaving irresponsibly and unlawfully.

This is one of the main reasons why a report from the European Transport Safety Council (ETSC) recommends that police controls should be sufficiently publicised, regular and long-term, unpredictable and difficult to avoid, and combine both highly visible and less visible activities.

Some examples of the road safety benefits of investing in roads policing include:

Nevertheless, despite the evidence for their effectiveness, traffic police numbers fell by 44% between 2007/8 and 2016/17 in England and Wales (E&W) outside the Metropolitan Police area, down from around 6,000 full time equivalent officers to under 3,400.[2]

This drop is significantly higher than the c17% drop seen in the police officer workforce as a whole over this period.

The chart below tracks traffic police officer numbers against police strength as a whole (E&W, outside the Met), and against reported KSIs (killed or seriously injured) per billion miles for cyclists (an alarming overall increase) and car drivers (overall decrease): 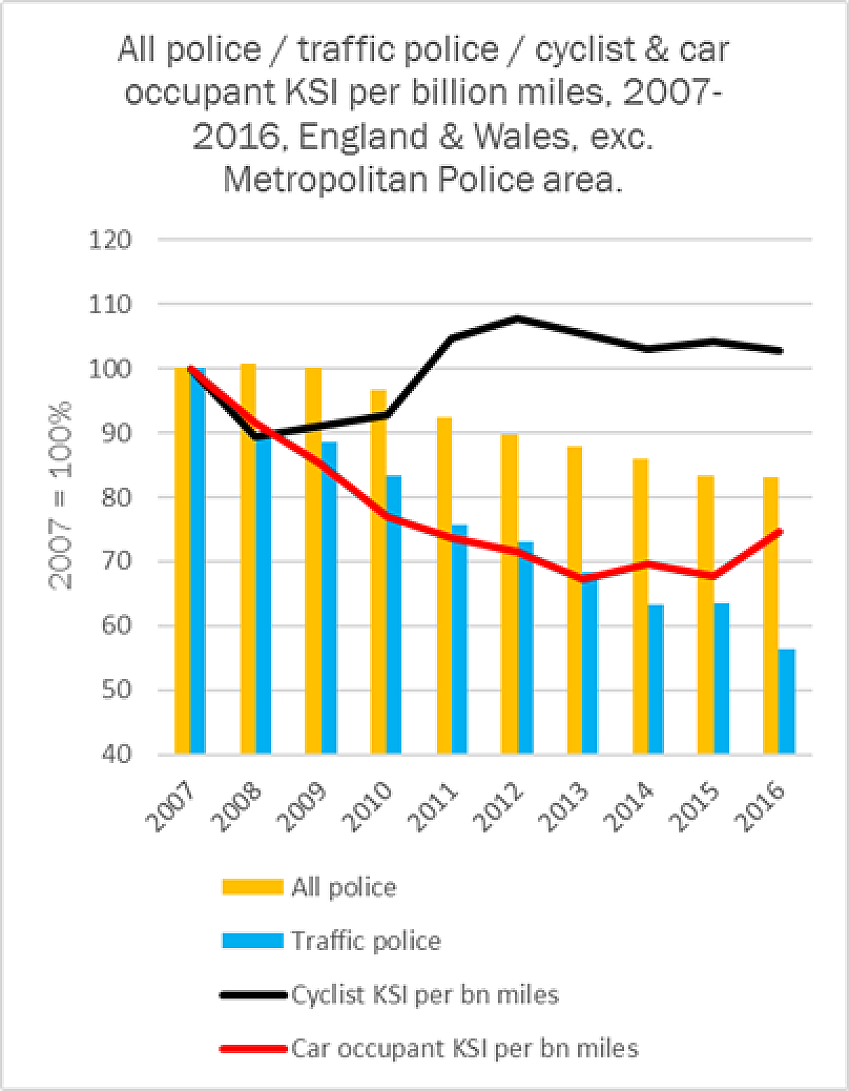 Although there are many factors that influence casualty rates for cyclists, it is not unreasonable to assume that the resources devoted to roads policing is amongst them.

When the issue of declining roads police numbers is raised, the Government usually responds by saying that it is a matter for each Police and Crime Commissioner (PCC) to determine their force’s priorities, and where to allocate resources.

Yet, in truth, PCCs do this within a wider framework that implies that roads policing and, by analogy, road safety, is not a national priority.

Under the Police Reform and Social Responsibility Act 2011, the Home Secretary’s view of current national threats and the policing capabilities appropriate to counter them is set out in the ‘Strategic Policing Requirement’ (SPR).

The SPR for England and Wales focuses on terrorism, organised crime, cybercrime, public disorder etc., but, as it does not mention roads policing. This means that decisions about its importance are made locally.

The sad reality is that cash-strapped PCCs are reluctant to cut services that the SPR identifies as most crucial. As a result, roads policing has faced disproportionate cuts compared with other police services, a situation likely to continue unless and until the Government takes the lead and includes roads policing within the SPR.

The situation in England and Wales compares unfavourably with that in Scotland. There, the number of officers assigned to roads policing rose by 4% in the year to March 2016.[3] Road safety and road crime, moreover, are priorities set out in Scotland’s Annual Police Plan 2017/18. (It was also given priority the year before).

Cycling UK believes that roads policing should never be omitted from the priorities set by national governments. This is because:

Cycling UK thus recommends that roads policing should be prioritised by national government and incorporated in all overarching policing strategies and plans, including the SPR. This would strengthen the case for individual police forces to give it the attention it deserves.

[2] We have excluded London's Met Police because, unlike other forces, they reported a huge rise in traffic police numbers between 2013/14 and 2014/15 (up from 264 to 1,433).  However, we found that this was largely due to a ‘reclassification’ of roles, rather than a genuine rise in the numbers of roads police officers. When combined with other forces’ figures, this gave the misleading impression that overall road policing numbers had risen by c20% between 2013/14 and 2014/15. Data sources: Police Workforce England & Wales (Home Office); Road casualty annual reports (DfT); Parliamentary Question.

How could the law protect cyclists better from car-dooring or drivers who fail to stop? View

What should the Health & Safety Executive, Traffic Commissioners and other agencies do to improve road safety? View

What’s the best way to make sure injured cyclists are compensated fairly and quickly? View

What are Cycling UK’s views on regulating cyclists’ behaviour? View

Call on your MP to stand up for road justice View

Why should the Government review road traffic offences in full? View

Was it any safer out there? Reported road casualties in Great Britain, 2017 View

What should the police do to improve the way they handle collisions involving cyclists? View

Call on your MP to stand up for road justice View

What can be done to make the justice system more transparent for road crash victims? View