Traditional cycle touring and modern bikepacking are two sides of the same coin, reckons Cycle magazine editor Dan Joyce. Yet there are differences in kit and bikes.

Adventure cycling, long overlooked by the industry, is fashionable again. If you walk around any cycle show, you’ll see gravel bikes with frame bags strapped to them on every other stand. It’s encouraging to see more bikes and equipment for travelling - for touring, one might say. Except the world touring is seldom used. Bikepacking is portrayed as something different, something exciting, something new.

It’s actually more of a renaissance. Trace your finger back down cycle touring’s evolutionary tree and you’ll find cyclists with frame bags, riding on dirt roads, more than a century ago. CTC members William Sachtleben and Thomas Allen Jr used frame bags and handlebar packs in their expedition around the world, which they began in 1890. John Foster Fraser, who wrote Round the World on a Wheel after his own circumnavigation, set off in 1896 with similar luggage. Like Sachtleben and Allen, Foster Fraser and his companions often rode on dirt roads simply because surfaced ones weren’t available. 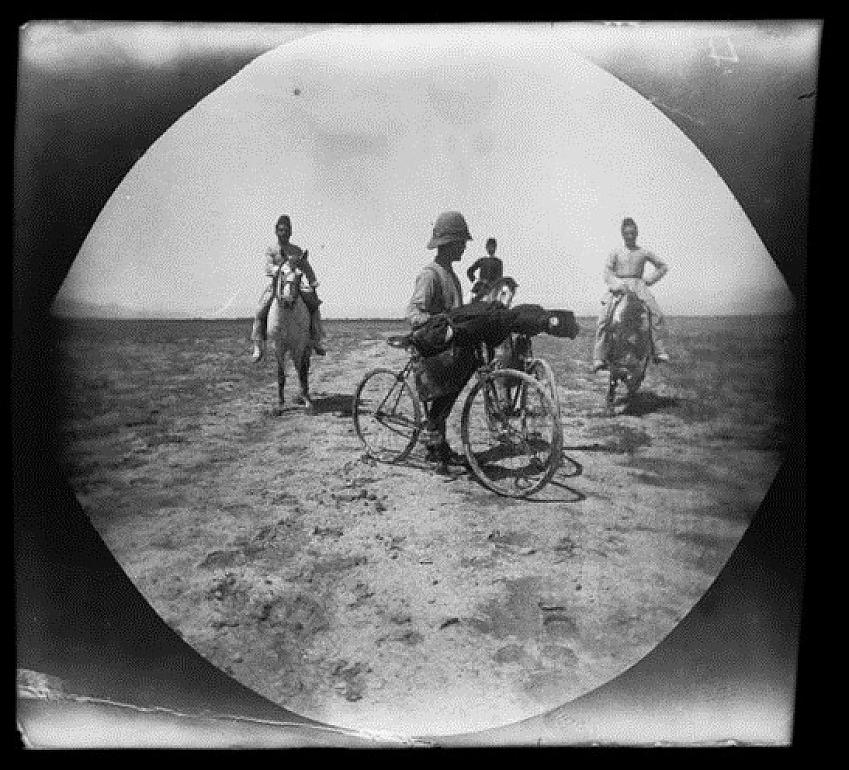 Even the world ‘bikepacking’ isn’t new. It was coined in 1973 by Noel Grove, a staff writer at National Geographic magazine, whose May issue contained the article ‘Bikepacking Across Alaska and Canada’. This covered part of an Alaska-to-Argentina expedition organised by Dan and Lys Burden and Greg and June Siple. The trip attracted other riders en route and inspired the formation of the Adventure Cycling Association, a comparable organisation to Cycling UK in the USA. The cyclists rode on gravel roads at times – as any touring cyclist might – but they used the luggage of their time: traditional racks and panniers.

Bikepacking is thus an old label for an even older activity. In recent years, however, it’s come to mean something quite specific. It describes a cycling trip that:

Bikepacking is a kind of back-to-basics, minimalist touring that takes place off the beaten track, with ‘track’ being the operative word. Since racks and panniers aren’t used, there isn’t quite the same convergent evolution in style that you see with touring and trekking bikes. A bikepacker might use a cyclocross bike, a fat bike, or a full-suspension mountain bike. Any bikepacking bike will invariably have: stable off-road steering; a wider handlebar; wider (37mm+) off-road treaded tyres; disc brakes; and no mudguards. 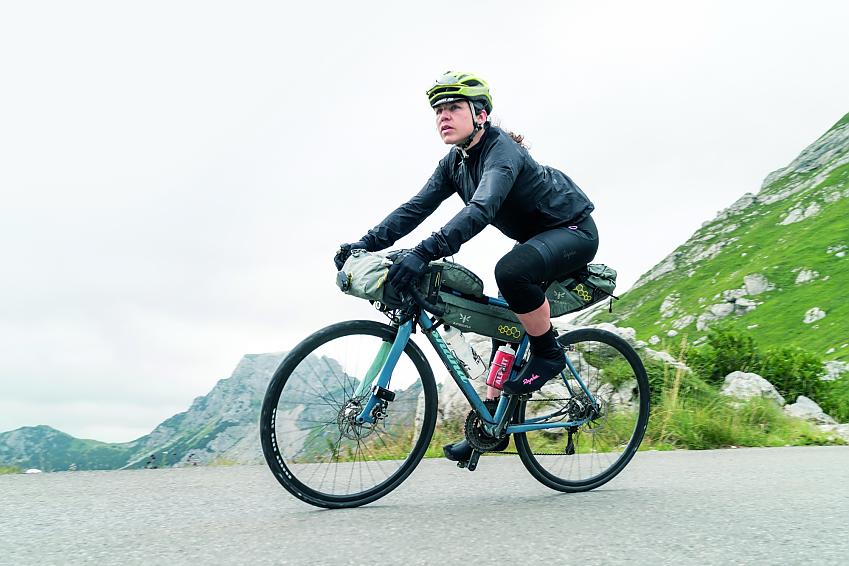 By contrast, a touring bike is designed to carry more luggage in panniers. As such, it needs a stiffer, stronger frame to carry this weight, with a longer wheelbase so that the rider’s heels don’t hit the big rear bags either side of the rear triangle. To get this heavier laden bike uphills more easily, gears are sensibly lower, thanks to a triple chainset or, less commonly, an Alpine double with an equally small inner ring. Since most touring takes place on roads, surfaced or otherwise, tyres tend to be lightly treaded for better rolling performance. There’s no particular expectation when it comes to touring accommodation: it might be a tent, a five-star hotel, or anything in between.

It’s curious that bikepacking in particular is where the industry sees the potential for growth in the adventure cycling market. Go to your local bike shop and count the number of touring bikes. Now count the number of gravel bikes and faux cyclocross bikes. The difference surely isn’t down to versatility, whatever the adverts may say. A tourer stripped of racks and mudguards and equipped with different tyres is a capable bikepacking bike, whereas a bikepacking bike may struggle as a loaded tourer due to frame angles that are too steep, gears and a bottom bracket that are too high, and a luggage capacity that’s insufficient.

Perhaps it’s simply that manufacturers of bikepacking bikes and equipment are doing a better job of selling the sizzle. They’re tapping into a demand for adventure cycling that’s probably always been there, and they’re doing so by focusing on an appealing idea: cycle travel as an adventurous, traffic-free escape. When roads were quieter, you could say the same thing about traditional cycle touring – and in the more fortunate areas of the UK, you still can.

The growth in the bikepacking segment of the cycling market is good news for anyone who travels by bike – or who might be considering it. We’re getting more choice in cycling luggage. We’re seeing more drop-bar bikes with clearances for bigger tyres, which should lead to a wider range of comfortably wide tyres. Perhaps we’ll even see Shimano bring out with a super-compact road double for gravel bikes, such as 40-24, so that anyone wanting lower gears on a drop-bar bike can get them off the peg. Here’s hoping. 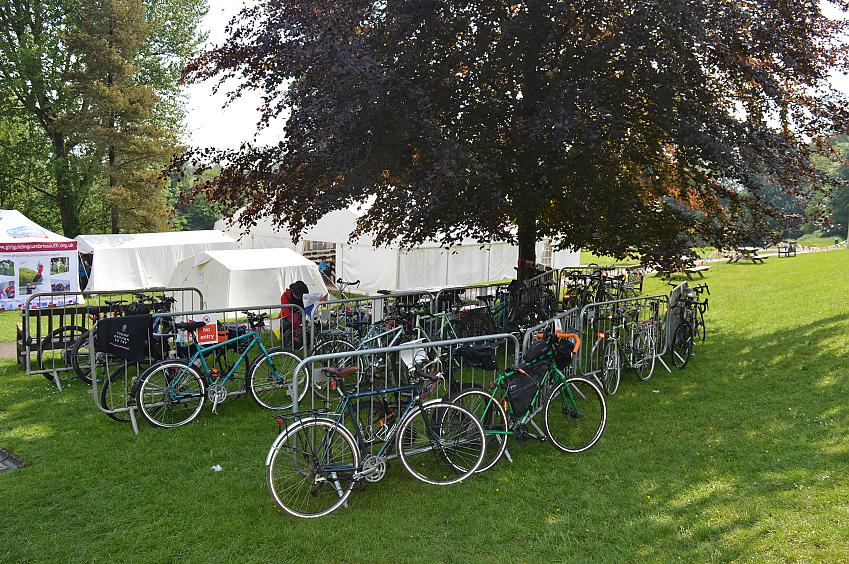 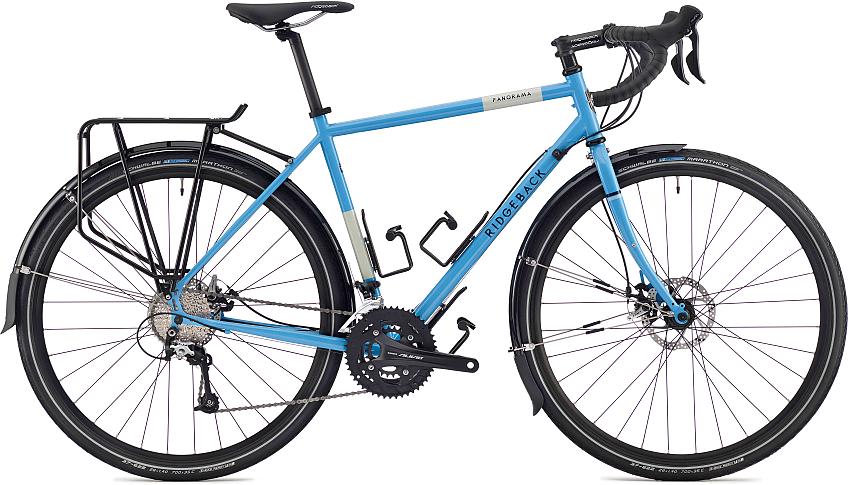 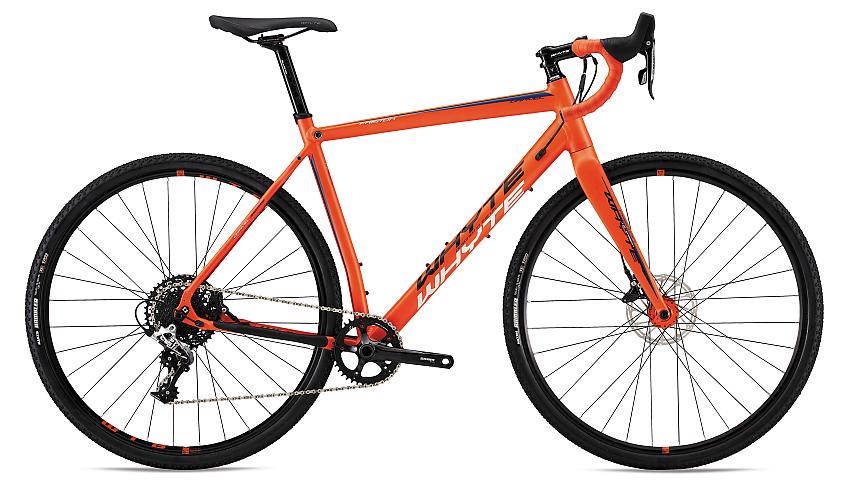 Advice from three ultra-distance cycle adventurers View
Cycling UK continues to support the UK to cycle
This remains true during this difficult period with the ongoing threat of coronavirus Covid-19
Read our latest advice on cycling
Join Cycling UK to help us change lives and communities through cycling
Membership gives you peace of mind insurance, discounts in cycle shops, rides & routes
Join now