Cycling UK member Alan Franks is a co-founder and organiser of the Diss Cyclathon, an annual fundraising event supported by several partners, including Cycling UK. Here he describes what is involved in setting up and running it.

In 2013 my wife and I moved to Diss in Norfolk, where the local arts and entertainment facility ‘The Corn Hall’ was under threat of closure. Being no strangers to the town, having lived in a nearby village for 34 years, we were keen to get involved and prevent this from happening.

I was given the task of helping with the fundraising, which, with input from the Heritage Lottery Fund, managed to generate over £3 million for what had become the Heritage Triangle project. As part of the project, an events team was formed and a number of events were proposed with the aim of encouraging more people to visit the town and use these facilities.

One of the proposed events was the Cyclathon and, being a cyclist and member of Diss CTC, I was seen as an obvious candidate to undertake the organisation of such an event.

I soon discovered that apart from giving it a name, no actual plans had been formulated. Notwithstanding that, and with no experience of organising anything of this sort, I set about the task of coming up with a plan. My first thought was to run an Audax along the lines of that already organised by Diss CTC from Garboldisham, a local village, or asking the organiser to move it into Diss. They were, however, not keen on this idea.

Another Cycling UK member, who was also a member of Diss Cycling Club, suggested running a sportive. He had and some experience in this area and gave me some helpful guidance. The first port of call was to present the idea to Diss CC and invite them to run it. Their initial concern was that it might not attract enough riders and could lose money. To alleviate their fears, I proposed that the events team would underwrite any loss and if a profit were generated, we would allow them to keep 50%.

Neil Collins, a member of Diss CC with excellent knowledge of cycling routes, stepped forward to organise the sportive and we thus had the centerpiece for the Cyclathon. Neil’s expertise and enthusiasm has proved to be invaluable. The 100, 50 and 25-mile routes he has devised have proved to be very popular with riders, many saying that they are the best of any sportive they have ridden.

In the first year, 2016, we attracted over 500 riders and made a healthy profit, all of which was donated to charity with the main recipient being East Anglian Air Ambulance (EAAA). Flushed with success, we immediately set about organising the 2017 event and set ourselves a target of 1000 riders that we again exceeded. Once again, we were able to make a generous donation to EAAA and other good causes locally.

What sets the Cyclathon apart from most other large cycling events is that it is not just a bike ride, it is a celebration of cycling and designed to appeal to everyone

What sets the Cyclathon apart from most other large cycling events is that it is not just a bike ride, it is a celebration of cycling and designed to appeal to everyone, starting with family rides of five, ten and 15 miles, up to the main sportive rides of 25, 50 and 100 miles, which are all fully signposted.

The event starts and finishes from the beautiful Mere Park in Diss, where we offer a wide range of support activities including children’s entertainment, live music and a variety of sideshows and catering stalls.

It is not surprising due to its popularity that local businesses have now stepped forward to sponsor the event, this year contributing over £4000.

Around the same time as the Cyclathon, the Corn Hall also staged some cycling-themed events with live theatre performances by The Handlebards, 'the world's first cycling theatre company who cycle from event to event with all their sets, props and costumes'.

It just goes to show what can be achieved that from small beginnings."

We have now affiliated the Diss Cyclathon to Cycling UK and hope that they will work with us to promote the event to an even wider audience. Every penny generated goes back into the community to support good causes.

This year's Diss Cyclathon takes place on Sunday 24 June and is a day to celebrate everything that is great about cycling in Norfolk and Suffolk. It includes family rides from five to 15 miles and a sportive through lovely country lanes with distances of 25, 50 and 100 miles. There are also going to be a host of activities on the park in Diss from noon to 5pm.

In the week leading up to it, a cycling-themed film is also screened at the Corn Hall. This year it will be Peter Yates's award-winning film 'Breaking Away'.

Thanks for sharing your story with us Alan and good luck with the Cyclathon 2018!

Join your group or club to Cycling UK

You can join your group to Cycling UK to benefit from our £10 million of Organisers' Liability cover and many other benefits, such as free publicity for your event via our UK Cycling Events Guide. 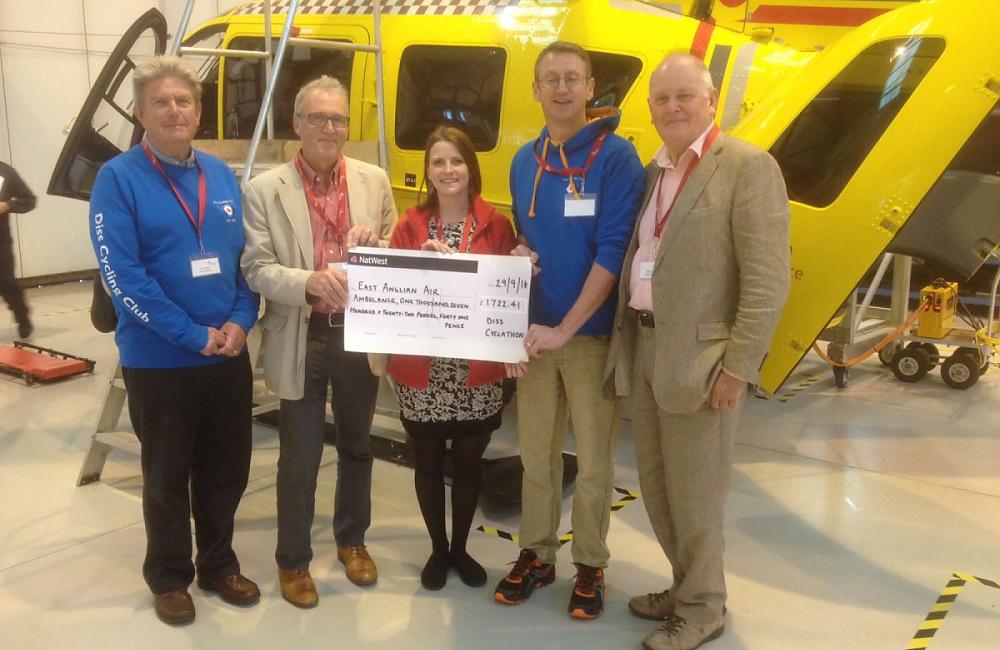 UK Cycling Events View
You too can champion cycling in the UK
Give your support today to help Cycling UK’s charitable work tomorrow. We double every pound you give through other sources to help change lives and communities through cycling.
Volunteer now