Chris Alston taking part in a sportive after rediscovering cycling

Chris Alston, Cycling UK’s Development Officer in Liverpool, opens up about how cycling improved his mental health after he left the army.

When Chris Alston rediscovered cycling, it turned his life around. Getting back on his bike helped him through a difficult period, after he had to leave his longstanding career in the army as a result of ill health.

Growing up it was always a choice between joining the army and becoming a bike mechanic, I really loved bikes, but I wanted to see the world and knew that I could do cycling activities whilst in the army. So, I chose to sign up.”

He recalls: “I used to work as an artic warfare instructor, teaching cold weather survival skills and cold weather warfare tactics. That involved cross-country skiing with a lot of heavy kit and teaching alpine and ski touring in Bavaria. Over time this had a real impact on my physical health, particularly my hips.”

Sadly, the condition in his hips worsened as it was left untreated for over a decade. At that time, the army couldn’t provide the funding to medically correct it. No longer being able to ski, Chris got back into cycling went on to be a qualified mountain bike leader.

“I looked after our fleet of mountain bikes for training in the garrison. Whilst I was a Telecommunications Manager, I could get the guys away to do something meaningful to promote their health and I really enjoyed it.”

Then, in 2008, Chris was deployed to Iraq. He remembers regular rocket attacks on the camp, at one point his camp had 30 hits. In total, he spent seven months in the contingency operating base in Basra, sleeping on a mattress on the floor surrounded by a breeze block enclosure. 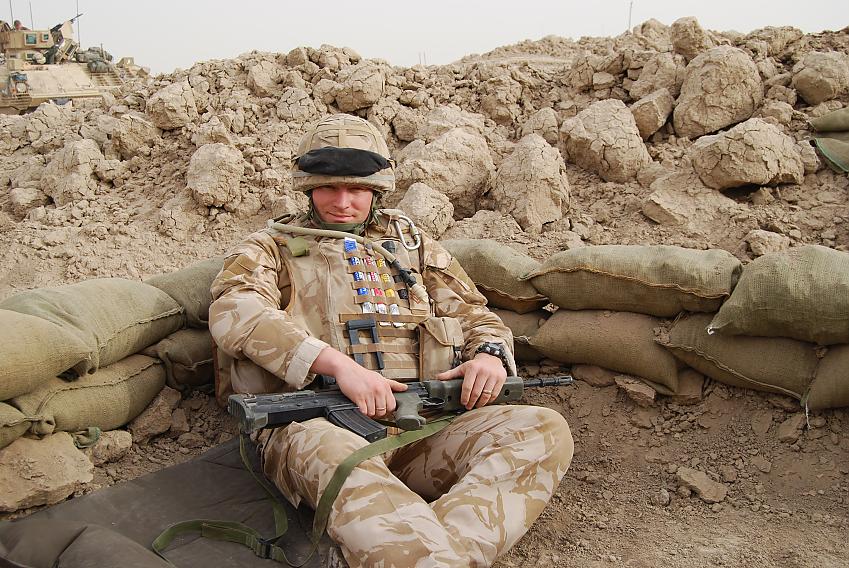 “When I got back I was promoted to Warrant Officer Class Two, as the brigade Yeoman of Signals, but both of my hips were now in a bad state and I was struggling to do most of the military activities. I was posted to Dorset as a Training Manager with a view to getting the surgery, but the money still wasn’t available. At that point, I realised it was going to be a long road to recovery, I was never going to get my career in the army back, I was now struggling to cycle – the routes I took were getting shorter and less challenging and my body couldn’t cope. That’s when my mental health began to suffer."

I was never going to get my career in the army back, I was now struggling to cycle – the routes I took were getting shorter and less challenging and my body couldn’t cope. That’s when my mental health began to suffer.

In 2013, I had both mental health problems and bad hips. I was beyond the point where if even I had surgery, it wouldn’t make me military fit. The army at the time were making cut-backs and it made make sense to get rid of the ones that weren’t fully deployable so I was invalided out of the service in 2014.”

Following his discharge, he had surgery on his hips and although his health improved, they were never fully back to full working condition and Chris still suffers with them.

He said “It was getting back on the bike, having struggled to ride previously that really helped me turn a corner. Now I know that if I miss a session I end up feeling depressed. There were several times where I walked to the shed, unlocked it, and then went back inside. Then one day I actually did get on my bike and everything changed for me.”

In April 2016, Chris started working at Cycling UK, he said: “I love working with the local communities, and through my role at the charity, setting community cycling clubs and encouraging cycling locally. I now ride every Thursday and Saturday and I’m getting more involved with some of the inclusive cycling clubs which I find so rewarding.

“I’m passionate about every discipline of cycling, I watch it on the TV and am desperate to promote cycling to anyone who wants to learn. Now, I feel I have to ride all the time, otherwise I start to feel down.

“Although it hurts my hips to get on the saddle, once I’m on I can ride all day. It has given me a new lease of life and I am delighted to be able to share the joy and freedom of cycling with other people.”

This Sunday he will be celebrating remembrance he said: “Remembrance fills me with pride, it gives me a chance to reflect on how fortunate we are as survivors. Our ancestors fought and gave us the opportunities we have today. On Sunday, I will be at the local cenotaph in Birkenhead and will most likely end the day with a ride.”