The motorbike slowed and pulled alongside us. ‘We don’t get many tourists round here,’ said the rider, adding: ‘The villagers will be pleased to see you exploring our country.’ We had quickly got used to such friendly approaches from everyone, but our trip to North Vietnam hadn’t started quite so well…

‘How on earth did they do that?’ asked my son, Andy, as he surveyed the damage to his bike after the flight from South Korea, in our hotel near Hanoi Airport. ‘That’ was a shattered front hub and squashed rear fork end. Fortunately, he had used an old hub as a spacer for the front fork so, while he carried the rest of his bike to a motorbike repair shop, perched on the back of the hotel manager’s little scooter, I rebuilt his rim onto that hub.

Bike fixed, we set off next day with nothing but a rough idea of where we were heading. Everywhere we went, we met friendly faces, people eager to shake our hands, say ‘hello’, and have their photos taken, especially the children in the villages we passed through. We meandered on tracks alongside canals, on rough roads surrounded by terraced paddy fields, past the friendly motorbiker, all the time getting further into the mountains. 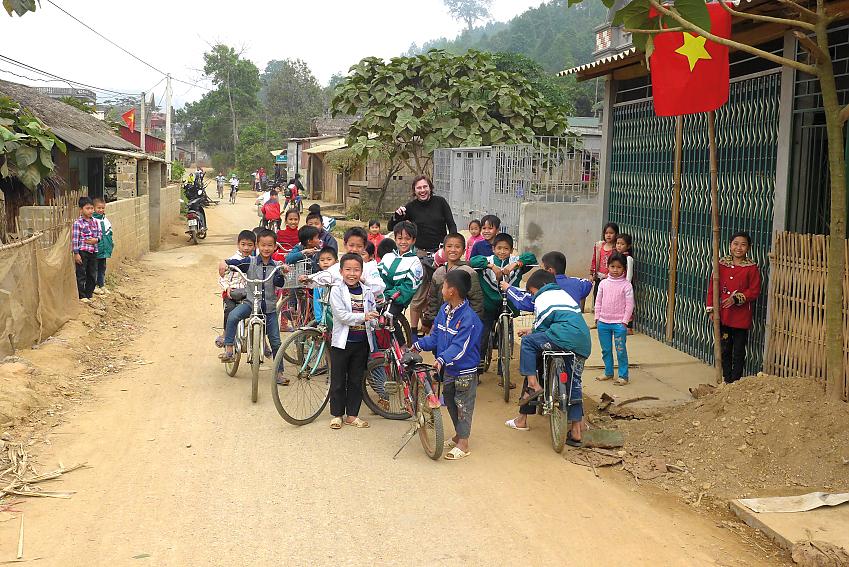 Not knowing where we would end up each evening initially caused us some concern: where would we sleep? But we needn’t have worried. We soon discovered nha nghi, private houses run as small hotels. They were everywhere and great value. Capitalism in a socialist state!

After three weeks, we took a train back from the Chinese border to the chaos of Hanoi – the end of a wonderful trip in a beautiful country.