Trash Free Trails: a community for lovers of the outdoors

Trash Free Trails: a community for lovers of the outdoors

Rosie Holdsworth is a member of Trash Free Trails, a group of riders, runners, and roamers. We spoke to her about how the group is positively impacting the environment around them whilst creating a community that welcomes anyone with a love for the outdoors - no matter your level of fitness

Mountain biker, fell runner, and outdoors enthusiast, Rosie Holdsworth lives in the Calder Valley in West Yorkshire with her husband, dog, and chickens. Since joining Trash Free Trails a year ago, Rosie has learnt a bike shed load about the social science of littering, the powerful healing benefits of natural spaces, and has met new people to share ideas with and make friends with.

The community exists to make a positive impact on the environment, protecting the trails we all love, initially by reducing plastic pollution by 75% by 2025, and reconnecting people with nature through purposeful adventure. It starts by simply picking up a piece of discarded rubbish whilst out on a ride - something everyone is capable of.

If you pick up other people's litter, does this not disincentivise them from taking their own litter home?

That’s a good question, and something I’ve often pondered. For me, the answer is always education and engagement. People don’t drop litter because they think other people will tidy it away for them – there a whole bunch of complex factors which lead to littering, but ultimately it comes down to people being disconnected from nature.

There’s all sorts of studies out there that demonstrate the huge disconnect between people and nature. Experience is increasingly proving that this has huge consequences; not only for the planet but for our emotional wellbeing, mental and physical health and even our connection with other people.

If you’re disconnected from something, you don’t see it as relevant to you, so you don’t care about it – in fact you don’t even think about it. If the great outdoors isn’t on your radar, why would you think twice about whether your crisp packet or wet wipe or drinks can will do real harm to it?

By going around and picking up other people’s litter, then drawing attention to it in a positive and engaging way, we’re getting the message out there about why the outdoors is so important, and the small steps that anyone can take to look after it.

Trash Free Trails are all about giving people positive reasons to do things, reinforcing helpful stuff that people do, rather than pointing the finger or blaming people when they get it wrong. I think this sets a really powerful example and it draws people in.

People start replicating it, doing their own trail cleans and sharing them with their friends and it snowballs because people see that they’re able to do something tangible to help tackle the problem of single use pollution.

Lots of our fellow countryside users see us as a problem, citing “illegal trails”, “dangerous interactions” with other trail users and an “irresponsible attitude”. It’s up to all of us to challenge these perceptions and demonstrate that we’re part of the solution

Why should mountain bikers take responsibility for cleaning the countryside?

Every user group has an impact on the wild places they visit, and it’s up to individuals whether that impact is positive or negative. It’s become starkly apparent this past year how important our wild places are to us. They’re not only our playgrounds – they’re our therapists, our breathing spaces, our lifelines. We owe these special places a huge debt of gratitude; tidying them up and in so doing, looking after the other creatures that call them home is really the least we can do!

I’m generalising here; but lots of our fellow countryside users see us as a problem, citing “illegal trails”, “dangerous interactions” with other trail users and an “irresponsible attitude”. It’s up to all of us to challenge these perceptions and demonstrate that we’re part of the solution, not the problem.

Mountain biking continues to grow in popularity and it’s inevitable that this is going to lead, sooner or later, to “the powers that be” (landowners, statutory organisations, government) taking more notice. By taking responsibility and looking after the countryside, we demonstrate to those powers that we’re a force for good.

Maybe I’m being overly optimistic; but it’s an awful lot easier to campaign for better infrastructure, increased access rights and further investment if you’ve got a giant portfolio of goodie-two-shoes trail cleans and general clever clogs positive impacts to draw upon.

Has your involvement in Trash Free Trails led to any conversations or built relationships with people outside of Mountain Biking?

Definitely! Stopping to pick up litter naturally slows the pace of your ride and means you have longer to chat to folk. People are naturally curious and often stop to ask you what you’re up to. I’ve had some great conversations and learned all sorts of random local history and folklore since I started stopping to pick stuff up on rides.

Occasionally the conversation heads down the lines of “well, obviously you’re an exception, it’s all the other mountain bikers who are the problem” and it’s great to be able to explain that I’m a tiny part of a great big network of riders all over the country (and the world) who are trying to protect their local wild places. It’s nice to be able to shift people’s preconceptions. 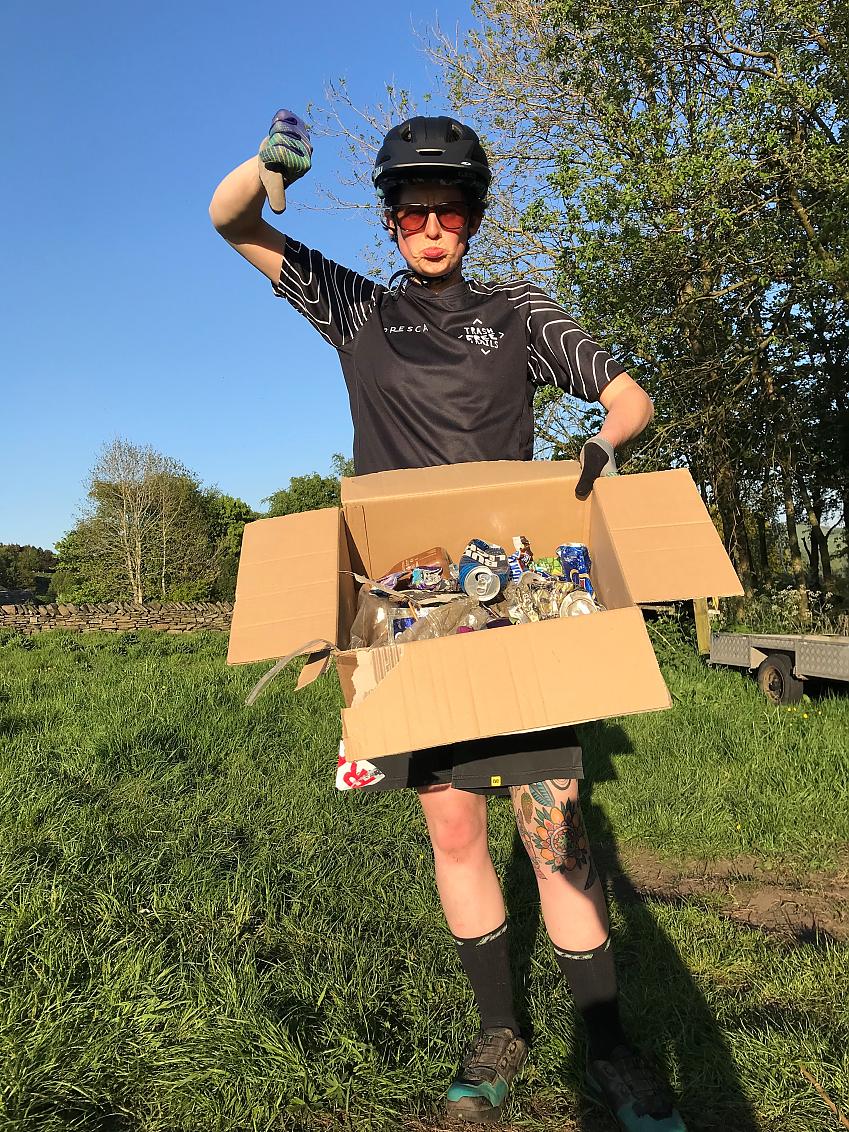 Cyclists say thumbs down to single use rubbish

Is litter education still on the agenda for school children?

I can’t really speak for what kids get taught in school as I’m way out of that loop, but Trash Free Trails are developing the TrashMob Academy, working specifically with young people, aiming to reconnect them with nature and thereby boosting how much they care about their local wild places.

It’s a youth engagement project, offering young people from Pupil Referral Units (PRUs) in the UK the opportunity to learn Mountain Biking skills, whilst developing their nature connection and environmental awareness in an effort to improve self-esteem, confidence, and overall wellbeing. It’ll be launching mid may, but you can read the report that followed the pilot phase.

Previous campaigns have often focussed on the negative and pointed the finger of blame at people, but experience has proven that this approach isn’t all that effective at reducing litter. Shaming people means they only avoid littering if they think they’ll get caught. That hasn’t worked - the litter problem is only getting worse since that first “litterbug” campaign from Keep America Beautiful in 1953. That’s almost 70 years ago!

By engaging people more positively and getting them to care about nature and wild places, you’re getting closer to solving the root cause of littering. If someone feels a connection to somewhere, they’re way more likely to take care of it, and way less likely to trash it! We are, after all, a part of nature, and it's best for both parties if we act that way, isn’t it?

Do you believe we'll ever truly see trash free trails?

Hopefully Trash Free Trails will have to have a giant re-brand in a few years because there’ll be no trail trash left and we’ll all have to find new hobbies! We’re realistic that we’re not going to fix littering on our own. Solving the problem of single use pollution is much more complex than simply picking up litter.

To make a real difference we need to better understand the types of things that are being discarded, dig into the reasons why people drop litter, help educate people to make positive decisions, address single use and throwaway product lifecycles, understand market drivers and commercial pressures – really, picking up litter is just the tip of the iceberg,and if we don’t get to the bottom of why it ended up there in the first place, we’re wasting our time.

But, crucially: we’ve made a start. Trash Free Trails has a formidable army of volunteers backed up by heaps of super keen young guns and lots of exciting partnerships and supporters, with more help coming on board all the time.

We’re using citizen science to compile the “State of our Trails” (SooT) report which will give us a baseline for the scale of the problem, and enable us to be driven by data, so we can be a bit more strategic about how we tackle the issue. As I mentioned before, we’re working with the TrashMob Academy to engage a new generation of riders and build their connection to wild places.

We’re connecting with the cycling industry and others to tackle single use pollutants at the root. It’s early days, but having got to know Trash Free Trails better this past year, and seeing the huge passion and experience within the team, I’m hopeful that we’ll get there one day! 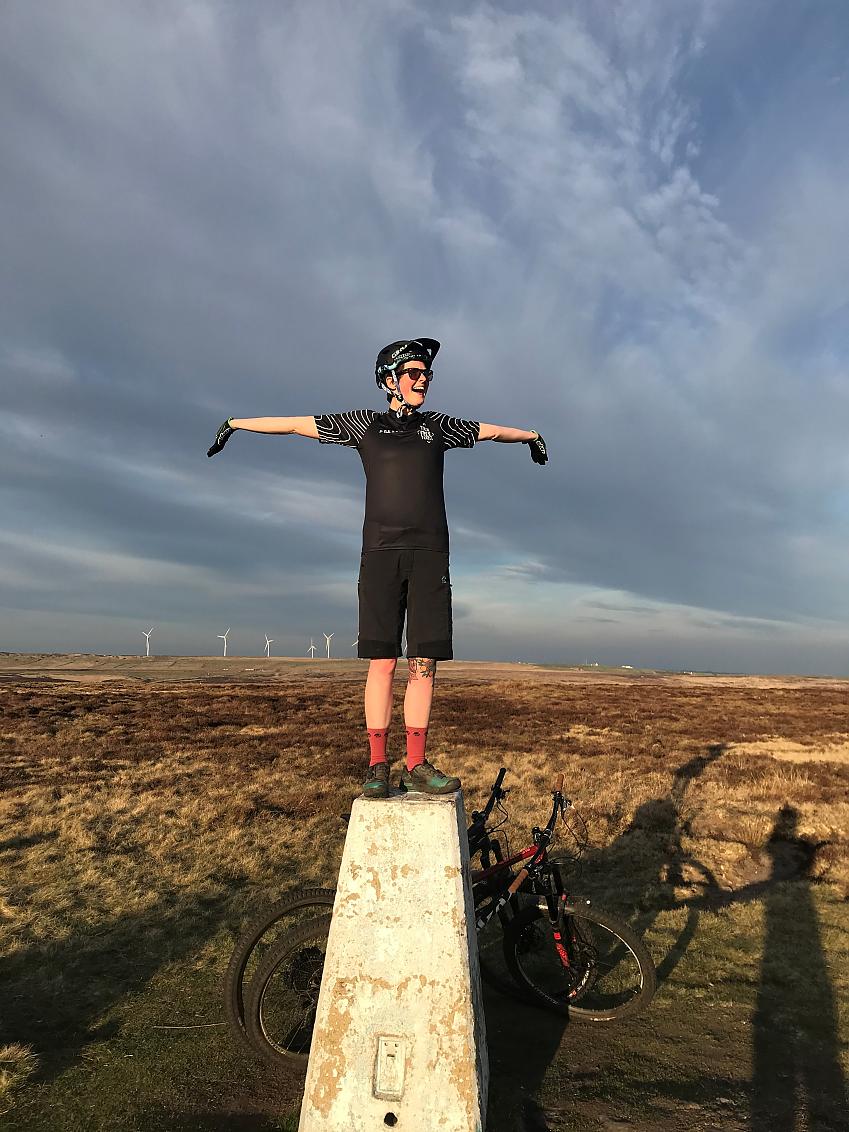 How can someone get involved in your work?

The best way to get involved is just to start! We’re fresh into the DIY Spring Trail Clean, so people can really easily get involved with that by checking out the prompts on the website.

It’s pretty simply broken down as the following: “Stay safe, Remove, Report, Reward”. By that we mean; make sure you stick to coronavirus rules, wear gloves and only collect single use pollutants (be sensible), pick stuff up and dispose of it properly, let us know (for the state of our trails report) what you removed, and reward yourself with a big piece of cake, or another ride just for fun, whatever you like.

It’s as simple as that. Once you’re into the swing of it, invite your friends along, rally our community from kendal to kathmandu, get them helping, clean new trails, and share your amazing work.

Hopefully in the not too distant future we’ll be able to run bigger trail cleans that people can come along and join in with, but for the meantime – you can have a huge impact by just making a start on your local loop.

Does Trash Free Trails welcome people who are new to Mountain Biking?

Trash Free Trails is a broad community of riders, runners and roamers. Everyone is welcome. We’re lucky that we’ve received some great support from big names within Mountain Biking and have some incredible athletes on the A Team.

Having said that, most of us are mere mortals who love nothing more than a pootle round our local area with several stops for tea and cake (or craft IPA) thrown in! If you value time outdoors and care about wild places, whatever that means to you, you’re welcome at Trash Free Trails.

Tidying up your trails is a really great way to get to know the trails better and appreciate the details. It’s also a great way of slowing the pace and taking lots of breaks, so it’s a brilliant leveller in a mixed ability group and means it’s easy to stick together as a group.

Joining in a trail clean unites people around a shared goal and inevitably leads to healthy competition around who can collect the weirdest item/most plastic bottles etc, rather than who’s first to the top of the climb or fastest through the rock garden.

Obviously we’ve had to do things differently this past year, with our trail cleans being fairly low-key affairs with a maximum of six people. I joined the A Team in the first Lockdown, meaning I’ve never met the rest of the gang in real life.

But through a combination of social media and DIY events like the Spring Trail Clean and Autumn Litter Watch, I’ve felt like a member of a great big community of likeminded riders and I can’t wait till we can travel further afield and meet up for trail cleans in new parts of the country.