Thousands of miles of trails will be opened up for cycling and horse riding across Wales in a landmark reform of access laws, following years of campaigning by Cycling UK and OpenMTB. Cycling UK’s off-road campaigns officer Sophie Gordon answers your questions and explores how it could work.

What's this all about?

The Welsh Government has just announced some big changes to public access which will provide more opportunities for outdoor activities. These include:

The Welsh Government began its consultation on improving access to the outdoors back in 2015. In response, Cycling UK together with Open MTB (the Welsh and English National Trail Organisation), launched our joint campaign: Trails for Wales.

Over four years and two consultations, we mobilised 12,000 people to write to the Welsh Government in support of the proposals. And thanks to you, they listened.

There are more details in our response to the announcement.

While the Trails for Wales campaign was spearheaded by Cycling UK and OpenMTB, it was by joining forces with other outdoor organisations that we were able to make the Welsh Government sit up and listen.

In 2017 the Outdoor Access Wales alliance was created, made up of The British Horse Society, British Mountaineering Council, Cambrian Caving Council, Cycling UK, Disabled Ramblers, OpenMTB, Open Spaces Society, Ramblers Cymru and Waters of Wales. By uniting behind a common goal, we strengthened the case to allow access for everyone.

It is heartening to see the Welsh Government recognising the huge public support for its forward-thinking proposals for access reform. ... [It's] a pragmatic measure that recognises the true value of mountain biking as both a public good and an economic attraction.

Why are things changing?

Currently where you can cycle or ride a horse off-road is determined by the historic classification of paths and tracks as footpaths, bridleways or byways. Once you take footpaths out of the equation, it only leaves 21% of the rights of way network that can be used by cyclists and horse riders – and 85% of cyclists who took part in our off-road survey say this makes it hard to put together a route.

In most cases, you could look at a footpath and a bridleway and not be able to tell the difference. The majority of footpaths could be used by walkers, cyclists and horse riders without an issue. Fortunately, the Welsh Government have realised how illogical and frustrating the current rights of way system is and are planning to make it easier for everyone to get out and explore.

How is this different from the rest of the UK?

Scotland was the first nation to introduce off-road access for everyone with its Land Reform Act in 2003. This progressive law gave the public access to most land and inland water in Scotland, whether on foot, bike or horseback, as long as they acted responsibly and followed the Outdoor Access Code. It’s been a huge boost for rural tourism: mountain biking and cycle tourism combined contribute over £230m per year to the Scottish economy.

England’s rights of way network extends for around 118,000 miles, but 80% of these are footpaths so there is no recorded right to cycle on them. There is, however, a legal right to cycle on bridleways, restricted byways and byways open to all traffic, and some trails have permissive access for cycling such as disused railway trails.

Public rights of way are a rare sight in Northern Ireland: there are only 0.2 miles of trail per square mile compared to around 2.4 miles per square mile in England and Wales. However, there is some great riding (mainly concentrated at trail centres at the moment), and huge potential for growth.

The Northern Ireland Greenways project calls for the conversion of more disused railway lines into greenways for family cycling, and slow progress is being made – but the current political stalemate means no decisions are being made until a new Assembly is in place.

Cycling UK hopes that this landmark change in Wales will help put pressure on England and Northern Ireland to rethink their outdated access laws. 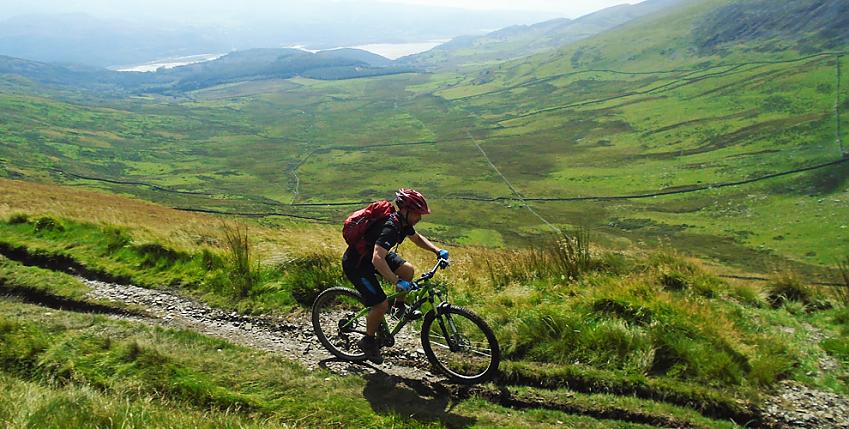 How will it be decided which footpaths should or shouldn't be multi-use?

Cycling and horse riding will be permitted on most – but not all – footpaths. Cycling UK have long campaigned for wider access for off-road cycling, but we recognise that not all footpaths are suitable for shared use and we fully support the Welsh Government’s pragmatic approach.

The tricky question is how to determine which are not suitable. The criteria are yet to be decided, but we think the main criteria for restriction should be where it is absolutely necessary for:

The last point is a contentious one, and we believe a key factor that needs to be considered is the density of users rather than the width of the trail. In popular locations where footpaths are already heavily used, unrestricted access could potentially cause issues, but in less busy places, there are many narrow, rocky bridleways where people already mix without any problems. It should be determined by context rather than a tape measure.

These proposals, when implemented, could be the most significant changes to rights of way legislation since Scotland’s Land Reform Act in 2003. It’s a great day for Wales and lovers of the outdoors.

Will these be restricted trails, like currently on Snowdon, or open to ride at all times?

The trails leading to the top of Snowdon are bridleways, but with a voluntary agreement restricting access in the summer months. Most other rights of way will be open at all times on the basis of responsible use, though as part of the process there may be routes that are restricted either seasonally or on a permanent basis for a variety of reasons such as safety or nature conservation.

Will people be able to ride off-trail over access land? Won’t that cause damage?

Currently people have a ‘right to roam’ on foot over open access land, such as mountains, moors, heaths and downs. The plans include extending this right to cyclists and horse riders, and would include areas like Cadair Idris and the Berwyn mountains.

When this law first came in for walkers there were concerns that it would lead to erosion, but in most places this hasn’t been the case. Where there have been problems, they have been dealt with through management and maintenance, rather than restricting access rights.

In reality, it’s likely that most people on bikes would stick to existing trails as roaming off-trail over moorland would be very hard work!

What if landowners object to horse riders and cyclists using their trails?

This is a difficult one - where those objections are well grounded, for example on a safety basis, then there are already provisions in both rights of way and open access legislation which would allow restrictions.

However, if it’s a case of 'not liking people on my land' then it does need to be remembered that these are public rights of way and the benefits of shared use for all will generally outweigh the personal interests of keeping a route limited to walkers.

Will this increase conflict between cyclists, horse riders and walkers?

This hasn't been the experience in Scotland, where there is no real evidence of conflict on trails. In addition, by spreading people over a wider area, it reduces the pressure on trails which are currently popular for cycling.

Putting everyone on an equal footing and promoting responsible use can create more of an acceptance of sharing space. Education also has an important role to play: part of the Welsh Government’s proposals include a code of conduct to promote understanding and mutual respect between different trail users.

Cycling UK have been working with the British Horse Society to raise awareness of how cyclists can pass horses safely and to encourage everyone to Be Nice, Say Hi.

Do the plans include allowing mountain bike races on bridleways? As a horse rider, I don’t like the sound of that!

Yes, but it's worth remembering that cycle races are pretty rare and tightly regulated – if you want to organise a cycle race on any highway, then you need to apply to the police and local authority for permission, and they will assess the application and impose conditions such as road closures and alternative routes. This will also be the case for any off-road races.

Untimed group ride events are allowed on bridleways already, and these won’t be affected. We think it is likely that a new access code will include sections that apply to events on rights of way and access land.

How soon can I go out and ride some new trails?

Hold your horses (literally in the case of the horse-riding community) - this has to be written into legislation which will take a bit of time and negotiation, but we do want to keep the pressure on the Welsh Government so they know we care about this and want to see it happen.

It would be great if the changes were brought in as soon as possible, but it’s important to make sure it’s done right. Cycling UK was involved when Scotland was the first nation to bring in off-road access for all, and the process took several years, including developing an Outdoor Access Code for responsible recreation which is now part of the national curriculum. A similar code should be created in Wales.

What are the next steps?

There are likely to be a lot of stakeholder meetings to find consensus on the best way to deliver the proposals. We hope that the clear statement of a presumption in favour of shared use on rights of way and access land remains the guiding principle, and it will be our job to try and make sure they keep their promise so we all have the opportunity to discover new trails.

Improving public access, particularly in the creation or restoration of connected routes, is a public good. Farmers, visitors and local communities in Wales will all benefit. 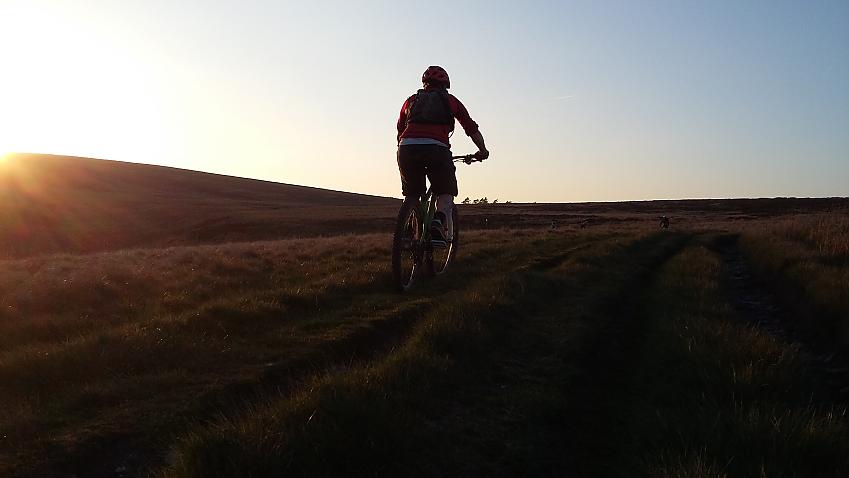 The Welsh Government began a consultation on outdoor access, and Cycling UK launched a joint campaign with OpenMTB

A second consultation, and this time we joined forces with other outdoor organisations leading to thousands of responses in support of wider access