Separated cycle lanes are good for business, reduce congestion, are fantastic value for money, get more people cycling and are what the public wants. Head of campaigns, Duncan Dollimore sets out the overwhelming case.

The narrative that cycle lanes are bad for business, cause congestion, aren’t used and that nobody wants them is the lie that’s half-way round the world before the truth has got its shoes on.

Please use them when you hear someone promoting the myths, share them with people you know, and let your local paper know why investing in cycle lanes makes sense. 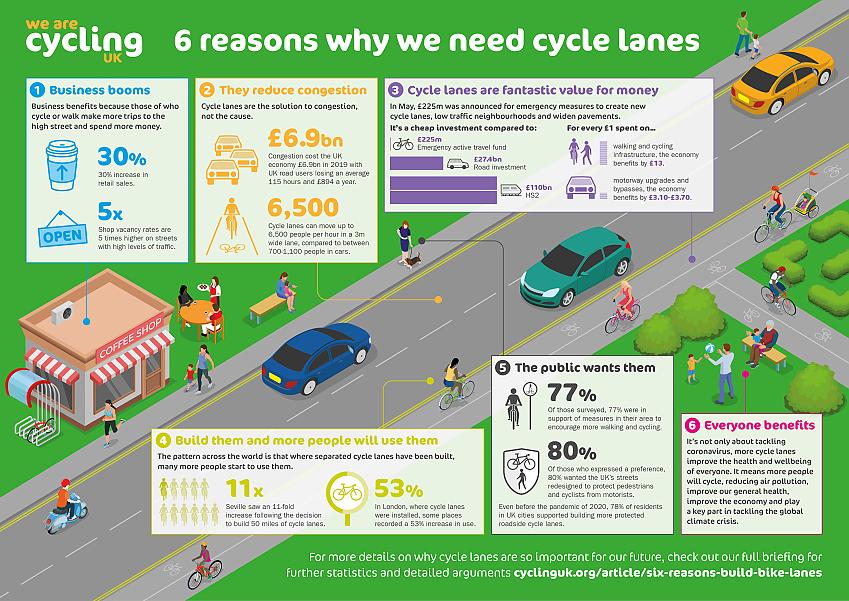 Give space to people walking and cycling – and business booms

People often recognise the environmental and health benefits from getting more people walking and cycling, but don’t appreciate that enabling more people to get to and from their high street on foot or by bike also has huge benefits for the local economy.

Between them, people who travel actively tend to make more trips to the high street and evidence suggests that cyclists spend more in local shops than the users of most other modes of transport, so it’s not surprising that other research shows that improving town centres and high streets for pedestrians and cyclists can increase retail sales by up to 30%.

Change can be frightening, however, so local traders and businesses sometimes fear that building cycle lanes or restricting car parking or motor vehicle access will damage business. But the evidence shows that:

Acorn Road in Jesmond, Newcastle, is a great example of scepticism and concern about loss of trade, followed by a business boom once measures to enable more active travel were introduced.

An initial critic of plans to change the road from a two-way to a one-way street with two-directional cycling and the removal of car parking spaces, the owner of the local hardware store became one of the schemes biggest fans, recognising that it led to more people walking and cycling on Acorn Road and a more relaxed atmosphere which was good for business.

There’s clearly no shortage of evidence showing that cycling and walking infrastructure is good for local business, much of which is summarised in this report on misconceptions of active travel investment (de-bunking myths three and four), and within both Living Street’s pedestrian pound report and this Transport for London report, but it needs to be communicated better.

If you arrived in the UK for the first time this summer and read or listened to media reports, you might assume that before temporary cycle lanes were installed in response to coronavirus, cars and other vehicles flowed freely through and between our towns and cities, and that we’re all experiencing  traffic congestion and delays for the first time!

Back to reality, the truth is that last year, congestion cost the UK economy £6.9 billion, with UK road users on average loosing 115 hours and £894 a year to congestion.

But even though statistics for 2019 show that motor traffic on minor urban roads (residential areas) increased by 36.4% in 15 years, with miles travelled by car and vehicle registration numbers still increasing annually, some still believe the myth that cycle lanes cause congestion.

The complaint is that road space is being taken away and given to cyclists, when the question should be how many people can be moved in the space?

For example, on London’s Blackfriars Bridge the cycle lanes take up 20% of the road space, but 70% of the people crossing the bridge at peak times do so within those lanes. That’s because a three-metre wide lane can move 700 to 1,100 people per hour in cars, but if used by people cycling or walking, that increases to 2,000 to 6,500, and it’s why, two weeks after opening, the cycle superhighway corridors in London were moving 5% more people per hour than they could without cycle lanes.

Of course, if a cycle lane is installed today it might not be full tomorrow, because behaviour change takes more than a day. But where good quality cycle lanes are built, people use them and those lanes move more people more efficiently in less space, enabling some to switch from using their cars, reducing the number of cars in the main carriageway.

Congestion in much of the UK has been increasing every year due to the inefficient use of road space caused by too many cars carrying one or two people. Building cycle lanes to enable more people to replace some car journeys by active travel is the solution to congestion, not the cause.

So, the Department for Transport’s (DfT) £225 million emergency active travel fund announced in May for cycling and walking infrastructure is a fraction of the £27.4 billion allocated for roads investment or the estimated total cost for delivering HS2, which seems to vary between £72 and £110 billion.

Even more important, is the value of return from that investment. The average ‘Benefit Cost Ratio’ (BCR) for walking and cycling projects (UK and non-UK) is an incredible 13:1, which means that for every pound spent on walking and cycling infrastructure, £13 is returned to the economy.

Okay, that’s an average, and the DfT’s calculations for different UK cycling and walking schemes variously show returns of between £4 to £19 for every pound spent.

Done properly, cycling is therefore one of the most cost-effective transport investments, with motorway upgrades and bypasses estimated to typically have lower BCRs of 3.1:1 and 3.7:1 respectively, and the BCR for HS2 just 2.3:1, based on the original cost estimate of £55.7 billion.

That’s why claims that spending money on cycle lanes is a waste of money are baseless. In England outside London, only around 2% of total transport spending is allocated to the most cost-effective form of transport investment - active travel spending. We’re wasting opportunities and money by not spending more.

Build the bike lanes and people will use them

When road space is set aside for cycle lanes, we sometimes hear complaints that cyclists aren’t using them, or that they’re only using them at certain times of the day. The photos posted on social media purporting to show cycle lanes without any cyclists aren’t usually a helpful indicator of their overall use.

Most of us could think of a road near where we live which is generally busy and often congested, but if we chose the right time of day, waited until cars were at traffic lights or otherwise picked our moment, we could snap a photo which appeared to show a quiet and empty road.

The pattern across the world however, has been that where separated cycle lanes have been built, many more people start to use them, with the city of Seville providing one of the best examples of what can be achieved relatively quickly, and that if you build it the people will come.

Like the UK, Spain has low levels of utility cycling compared to northern European countries such as Holland and Denmark, with less than 2% of people indicating that a bicycle is their main means of transport. But Seville’s decision to build 50 miles of cycle lanes in just a few years led to massive behaviour change, and an 11-fold increase in rider numbers.

And when the doubters say that the continent is different, and it wouldn’t happen here, the evidence shows they’re simply wrong.

In London, the total distance cycled increased by almost 5% in the year 2018/1; but tellingly, where new cycle lanes had been installed, increases of up to 53% were recorded.

An increase of up to 42% was recorded on Green Lanes in Enfield after the introduction of a largely segregated mini Holland scheme, and improvements to Quietway 2, between Walthamstow and Bloomsbury, increased cyclist numbers by up to 33%.

So people will use them if cycle lanes are built well, as we saw when over a million cycling trips were recorded along the Embankment in London within four months of opening in 2018.

We’re hearing objections to new cycle lanes and low traffic neighbourhoods, but that’s not reflective of what most people want or support.

In July, a YouGov survey carried out for #BikeisBest revealed that:

But whilst those surveyed were clearly in support of more cycling in the UK, at the same time they consistently overestimated other people’s opposition to it.

Dr Ian Walker, environmental psychologist at the University of Bath, indicated that “Perhaps one reason negative voices find it so easy to sway things their way is that people have a tendency to misjudge public levels of support”, and that whilst the survey showed that “most people think Britain would be a better place if more people cycled, they also guessed that other people were less supportive, and more hostile, to the idea than they were.”

The data showed that 3.26 people support the view that ‘Britain would be better if more people cycled’ for every 1 person against. But when asked what they thought the opinion of their friends or the general public would be, many respondents drastically overestimated the negativity towards cycling.

The BikeisBest survey supports Cycling UK’s own data from a separate YouGov survey in April, where 36% per cent of people questioned agreed that they could rethink their travel habits in the future to use cars and motor vehicles less, but that to carry on cycling when the coronavirus crisis was over, they wanted to see:

And it’s important to note that this isn’t just a 2020 coronavirus phenomenon, because Sustrans’ 2018 Bike Life report also showed that 78% of residents in UK cities support building more protected roadside cycle lanes, even when this could mean less space for other road traffic.

I know, the sceptics have always suggested that we’ll never get more people cycling in the UK, that it’s too hilly, the weather’s not good enough or that culturally it’s just not something a larger percentage of people will do. But the coronavirus crisis proved them wrong, with cycling levels drastically increasing when people felt that it looked and felt safer for them to cycle.

What’s abundantly clear form every survey about attitudes and travel choices, is that it’s separated cycling infrastructure that would enable people to carry on cycling now that motor traffic has returned more or less to pre-coronavirus levels.

So, we know people cycled more during lockdown, they largely support more cycling and walking infrastructure, but they overestimate other people’s opposition to it.

That’s why it’s time to fight back against the bike lane backlash and make sure that the voice of the silent majority is also heard.

If we get this right, everyone benefits

This is a bit of a general point, and links to the objections we’ve all heard in recent weeks that temporary cycling and walking infrastructure has been installed as part of a coronavirus response without proper consultation, and that some of it either isn’t perfect or was poorly thought through.

Of course there wasn’t full consultation this summer, because the normal rules didn’t apply. Practically every decision central and local governments have made since March have been made at pace, and decisions about temporary active travel infrastructure were no different, leading to variance in the quality of schemes.

For new schemes, however, local authorities across the UK are being asked to think more long term, which creates opportunities for better consultation, and for schemes to be trialled, tweaked where necessary, and with more time to think about network planning.

So whilst consultation and community engagement are vitally important, any lack thereof this summer needs to be put in context, and isn’t a good reason not to build more (and better) cycle lanes and active travel infrastructure, because doing so and getting more people cycling:

And why wouldn’t you want that?