Mountain biking on Snowdon? Here's what you need to know

Cycling UK continues to support the UK to cycle
This remains true during this difficult period with the ongoing threat of coronavirus Covid-19
Read our latest advice on cycling
Descending the Llanberis Path. Photo by Jeff Buck via Creative Commons
By Sophie Gordon
Friday, 26 April 2019

Mountain biking on Snowdon? Here's what you need to know

The Snowdon Voluntary Cycling Agreement restricts when you can cycle up and down Snowdon during the summer months. Sophie Gordon, Cycling UK's off-road campaigns officer, explains why the agreement is important.

As the highest mountain in Wales at 1085m, Snowdon is a classic challenge for mountain bikers. It’s also the UK’s most popular mountain for walking, with around 375,00 people climbing it every year.

Snowdon’s popularity combined with its steep trails present a potential safety risk to both cyclists and walkers. The solution decided in 2003 was the Snowdon Voluntary Cycling Agreement, which involves cyclists agreeing not to exercise their legal right to ride on the three bridleways to the summit between 10am and 5pm from the beginning of May until the end of September.

Where does the agreement cover?

The restrictions affect the three bridleways to the summit: the Llanberis, Snowdon Ranger and Rhyd Ddu paths. 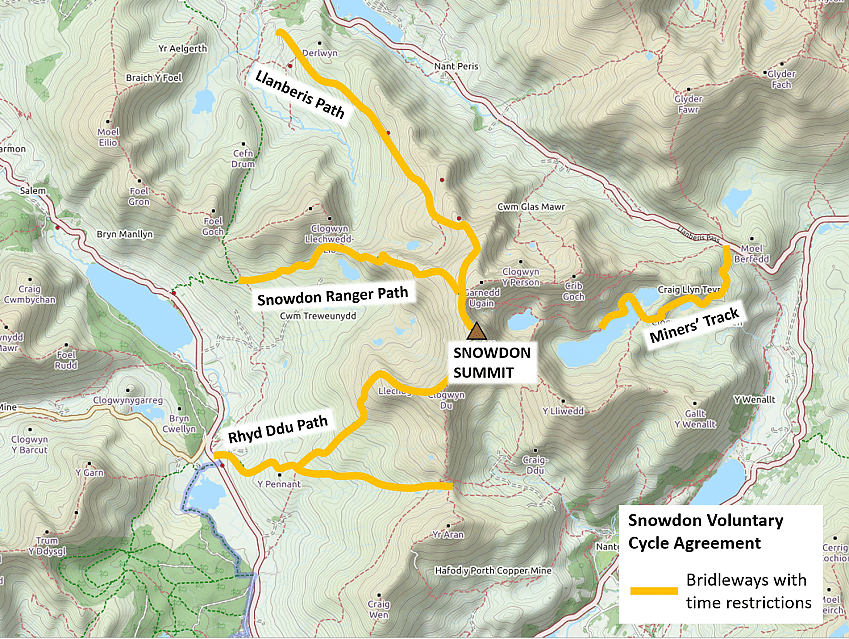 Who came up with it?

Are there any alternative routes that can be used all the time?

Yes – whilst you can’t go up to the summit during summer days, the Snowdonia National Park Authority has produced a map with a few suggested alternative rides around Snowdon.

How is it enforced?

As it’s a voluntary agreement, it is up to individuals to respect the restrictions. Cycling UK urges people to do so for everyone’s safety and enjoyment, and to ensure that the right to enjoy Wales’ highest mountain isn’t put at risk by a small minority.

Besides, where’s the fun in trying to pick your way down among a crowd of people when you could have the mountain all to yourself as you watch the sunrise?

“The agreement has worked well for many years, showing that all users can share the paths successfully, but this does rely on individuals complying with the agreement, which most do.

“We’re delighted that so many mountain bikers come to Snowdonia and choose to ride on our highest mountain, and the success of this agreement could lead to increased access in other areas over time, so we would urge cyclists to please respect other users and exercise due caution – especially on their descents.”

We’re delighted that so many mountain bikers come to Snowdonia and choose to ride on our highest mountain... we would urge cyclists to please respect other users and exercise due caution – especially on their descents.

“Cycling UK is saying to everyone heading to Snowdon between May and September that if you want to ride, then get up a bit earlier or go up a little later. Share with care and respect others so that everyone can enjoy the mountain.”

What are the benefits?

Besides being safer for everyone, the restrictions encourage you to experience the mountain in a different way to how you might have seen it before, with the fresh early morning dew beneath your wheels, or the golden glow of the sunset.

Truth is, the restriction makes riding Snowdon more fun. It adds to the experience really - sunrise on the way up, or sunset on the top - it makes a great ride even better.

"Snowdon is a great experience - without a doubt, the most exciting and rewarding ride in Wales. But it's also incredibly busy. Bikes descending technical ground and large numbers of walkers do not mix so without some kind of compromise, bikes would have been banned from the mountain altogether. This would have been a tragedy.

"Truth is, the restriction makes riding Snowdon more fun. Anybody who has been up the mountain when it's busy will realise just how frustrating it can be – not to mention the danger to both walkers and self. It adds to the experience really - sunrise on the way up, or sunset on the top - take your pick - it makes a great ride even better.

"And by complying, we all know we're not ruining it for anybody else, so we can relax and enjoy the ride. "

Thinking of taking on the challenge?

Bear in mind that the weather can change quickly on Snowdon, so be prepared for the conditions and be aware that you could be delayed. A fit rider can accomplish the return trip in 3-5 hours, so a morning ascent is possible if you get up early. Outside of peak times, make sure someone knows where you are going and advise Llanberis Mountain Rescue of your plans: 08448 484064.

The Llanberis Path makes for the most rideable ascent, but once you reach the top, the choice is yours. Keep it simple and return the way you came, or test yourself on the Rhyd Ddu Path or the spectacular Snowdon Ranger Path.

Taking the highest road to raise money for charity View
You too can champion cycling in the UK
Give your support today to help Cycling UK’s charitable work tomorrow. We double every pound you give through other sources to help change lives and communities through cycling.
Volunteer now