David on his Kenyan adventure
By Lucy Watherston
Tuesday, 24 July 2018

If you think cycling 120km is a challenge, then try doing it in the 40-degree heat of Kenya at the age of 60, and only a few years after a near-death experience. New Cycling UK member David Gerrie and a few teammates did just that.

For the past six months David had been in training to take part in the Muskathlon Challenge. This was a real personal achievement, as just four years previously, he was fighting for his life in intensive care and didn’t know when he would be able to cycle again.

David says, “Just four years ago, following a very silly broken foot, I was diagnosed with Deep Vein Thrombosis (DVT) and multiple pulmonary emboli. I had severe blood clots in both lungs. My left lung collapsed and I was fighting for my life in hospital.

"I was slowly recovering, but hadn’t done any serious cycling. Then in December last year the doctors gave me the all-clear to start training.”

Before David’s health problems he was an avid cyclist and had taken on many challenges, including London to Brighton, Lands End to John O’Groats and the Raid Pyrenean. However, taking on this ride meant overcoming a huge health hurdle for David. Driving him was a desire to raise money for Compassion UK and poverty-stricken children in Kenya. 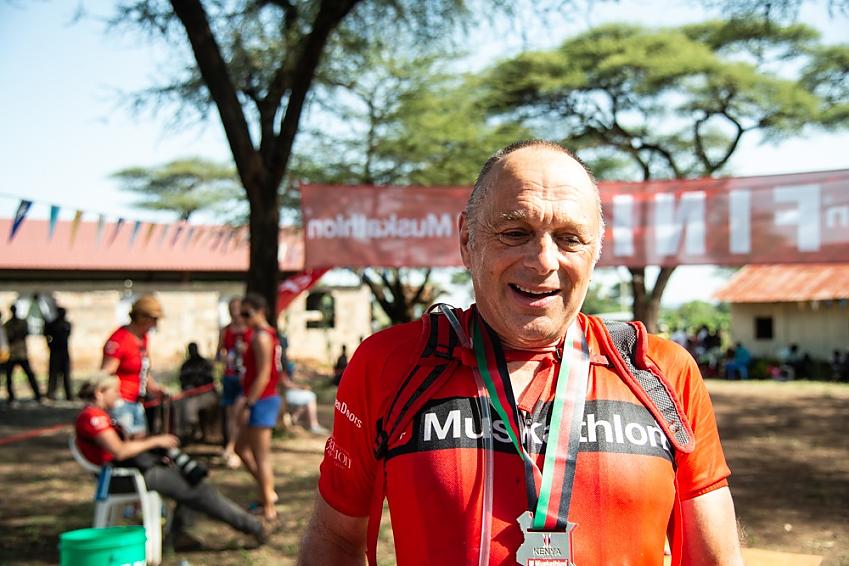 In June, David travelled out to Kenya for the week-long adventure. He was thrilled to complete the 120km cycle ride in blinding heat and difficult terrain. At present he has raised over £6,000 to support children living in poverty in Kenya and has secured sponsorship for six children. This will enable them to receive good quality education, meals, emotional support and medical education.

A bridge was washed away due to flooding and then a family of hippos was blocking the path!

David reflects, “We are so blessed here in Sussex with the South Downs, and I had trained a lot. But it doesn’t compare to the terrain in Kenya. We were cycling on tracks, littered with stones and rocks. Usually you get times when you can free wheel, but there was no chance. There was no respite. So as a ride, it is extremely hard.

“Also, the original route we cycled had to be extended, as a bridge was washed away due to flooding and then a family of hippos was blocking the path! But crossing the finish line was amazing. My wife Caroline was there and she gave me a hero’s welcome!

“It was life changing, awe-inspiring and humbling. From a sporting perspective it was brilliant – to ride a mountain bike in Africa is one to tick off the bucket list! But I would do it again in an instant to meet the people. It’s a beautiful land and part of my heart will always stay in Kenya.”