Limited space doesn’t mean you can’t practise your cycling skills. As a father who turned his backyard into a training area for his bike mad son demonstrates.

Keen off-roader Phil Allen is one of the co-founders of the newly registered Cycling UK Community Cycle Club Tame Valley Mountain Bike Association. The group have been working with the local council to get more off-road riding routes on the map in Tameside and introducing new people to mountain biking opportunities in the area. Phil, from Stalybridge, is also a father and a foster carer and recently began work on a project to get more looked after children riding bikes and to upskill foster parents in bike maintenance and family riding.

Unfortunately, the coronavirus outbreak has put the brakes on all Phil’s community plans, as well as putting a stop to his family rides when his household was forced into two weeks of isolation. Not to be deterred, Phil decided to use what space he had to keep his bike-mad son Ryley, 11, practising his cycling.

“My lad Ryley is very active and he’d never cope being stuck in the house for 14 days”, said Phil. Armed with nothing but a bag of cones, Phil had to think outside the box about how he could keep himself and his family riding.

“The idea came from some bike games I already know and some that I have seen at other children’s coaching sessions. Ryley already loves his cycling and has been working on his track stands, so we set out a rectangle to see how long he could stay on his bike without leaving the area. We then moved to a slow race across the garden, as Ryley was on his own I timed him to see how long it took him. Another game is setting up a circle and having everyone ride around inside in the same direction and gradually making the circle smaller.” 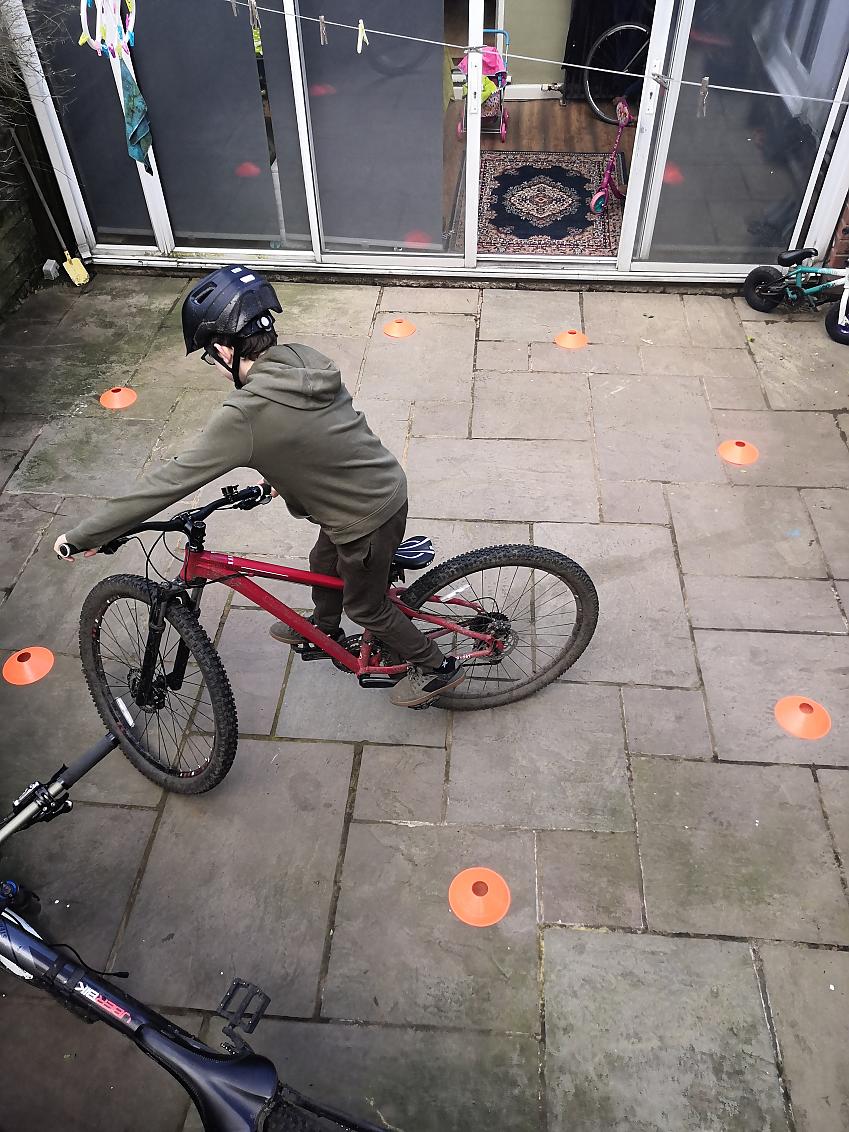 Not everyone will have cones to use in their garden or yard, but Phil says you can use almost anything to mark out a course; cans, stones, pots.

"The games are all based around controlling your speed, balance and turning corners, so all designed to help your bike control which can be used in lots of different types of riding (in mountain biking its especially important when riding technical trails) or for taking evasive action.

“The idea for doing the games is to help him improve his riding and more importantly help keep his passion burning for mountain biking whilst we can’t get out. Plus it also counts towards his home schooling PE lesson. It also helps me to keep playing around on the bike as I’ve been trying the games as well to help improve my own riding and it has also introduced a bit of a competitive edge to add to the enjoyment with Ryley being determined to beat me.”

Phil says devising the backyard skills sessions has given him new ideas to take forward once the restrictions are lifted. He says he is keener than ever to encourage the local community to get out on group rides when possible and to support local businesses as they seek to rebuild after the lockdown.

Can a turbo trainer novice be converted by the coronavirus lockdown? View
Cycling UK continues to support the UK to cycle
This remains true during this difficult period with the ongoing threat of coronavirus Covid-19
Read our latest advice on cycling