How much money can you save by cycling?

How much money can you save by cycling?

We often hear that cycling can save you money on transport but exactly how much can we really save? Cycling UK's communications officer, Christina Bengston investigates

As we think about how to save money on our fuel bills, Cycling UK wanted to share with you how cycling can also play a part in reducing your bills.

Almost a third of people who have a driving licence also cycle, and over 83% of adults who cycle, also drive. So this isn't about getting rid of your car and cycling every journey.

The majority of journeys (67%) made are under 5 miles, a distance that can be cycled by many. Below, we will look at the savings you can make by switching from your car to your bike for short journeys, but first, let's compare the big expenses.

Purchasing a new car in 2018 would have set you back approximately £33,559 according to the automotive data company Cap HPI. That figure has increased £9,176 over the past ten years.

Used car prices are of course much lower, in 2020, averaging at £8,000 according to British Car Auctions.

Your initial outlay when buying a cycle on the other hand is much, much lower.

Whatever your budget or how much you want to spend on your new bike, it will be significantly cheaper than what you pay for a car.

How much each household spends on transport varies widely, but it was around £80.80 a week on average in 2018. Only a tiny amount of this, currently goes on bicycles.

Below, we'll look at how we can reduce our weekly spend on motorised vehicles.

Petrol and diesel costs are a significant outlay for car drivers. Fuel prices in January 2021 according to data published on the Gov.uk website list unleaded petrol as 116.93 pence per litre and diesel at 121.52 pence per litre.

That means filling up the average 65 litre petrol run car would set you back £76.00. Granted, this will get you far. According to reports from 2019 a Ford Focus can travel over a thousands miles on a 52 litre tank of fuel. Pretty impressive. Well maybe, but not when you think that a bicycle will take you that same distance (albeit a bit slower) virtually for free.

In fact, the majority of journeys (67%) made are under five miles. But cycling only accounts for less than 2% of all journeys.

Imagine the money we could save if we switched those short drives to pick up a few items at the shops, or dropping the kids off at school to a bike.

According to the National Travel Survey, in England in 2019 people travelled an average of 6,500 miles a year.

We did a little calculation for you to work out how much you could save per year on fuel by switching trips under five miles from the car to a bike. 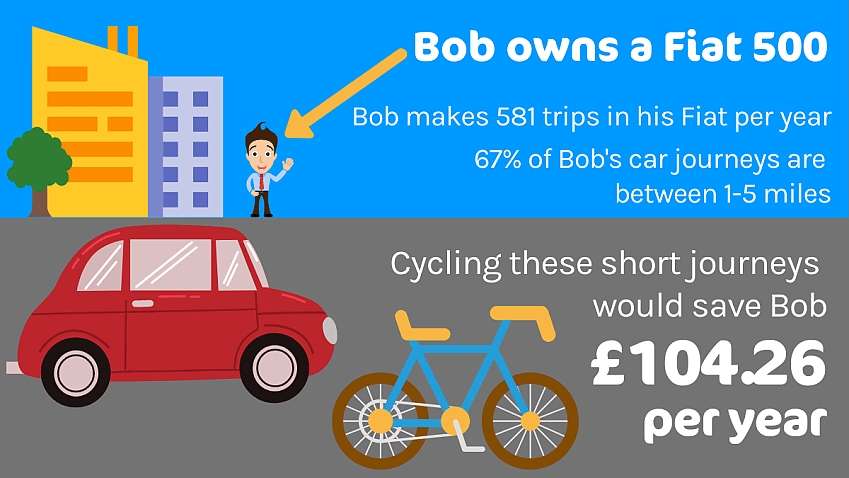 Bob’s car is pretty fuel efficient, but for people with a bigger car you’re looking at significantly bigger savings.

The average cost of a car service is around £125. This doesn’t include the cost of any replacement parts, repair or labour cost (unless you’re capable of fixing your own car).

Bikes replacement parts on the other hand, depending on your bike, are going to be far cheaper than those you need for your car and a service will be between £55 - £100. The big difference is that many cyclists will do most repairs themselves.

If you fancy increasing your bike mechanic skills look into some of our courses.

According to the Association of British Insurers the average cost of care insurance in the UK is £485 a year.

£10m third party insurance cover for your bike however, is free with your Cycling UK membership. With individual membership starting at £24 a year, this is a huge saving.

Fortunately, Road Tax was stopped in 1937 thanks to the work of Winston Churchill, so no one pays this anymore. Roads and their maintenance are paid for via general taxation and council tax - which everyone pays, no matter their choice of transport.

There are also lots of hidden costs to driving.

Parking for cyclists is free. Whether you’re parking in a bike stall or designated space, or you’ve locked your bike against a pole, railing or tree, parking for bikes is free.

The average cost of parking a car in the UK is between £1.10 and £1.65 per hour. It doesn’t sound like much, but with frequent shopping trips, this will add up.

The benefits of cycling to our health and wellbeing are enormous and widely documented.

Cycling is excellent exercise. It helps people meet their recommended physical activity guidelines and improves their physical health while reducing the risk of premature death and ill-health.

Cycling to work is linked with a 45% lower risk of developing cancer, and a 46% lower risk of cardiovascular disease (CVD), compared to commuting by car or public transport.

The importance of exercise on our mental health and wellbeing is often underestimated by individuals and even some health care professionals.

Aerobic exercises – including cycling – have been proven to reduce anxiety and depression.

Climate change threatens the future of our way of life and economy, as well as our health and the natural environment that we all treasure.

Cycling provides a highly efficient transport option and it is part of the solution for a low-carbon future.

If people in England became as likely to cycle as people in the Netherlands, there would be around two million fewer car driving commuters. Consequently, English authorities could reduce CO2 outputs by over 1,500 tonnes a year on average.

Put simply, switching our short journeys (five miles and under) from a car to a bike is one of the simplest lifestyle choices that individuals can make to reduce their carbon footprint.

If you're thinking of making a switch from the car to the bike for some of your shorter journeys, make sure to read our advice pages. Whether you're a beginner, need help planning a route, or tips on commuting, Cycling UK can support you.

Cycling: the easy way to save fuel View

How investing in cycling makes sense and makes money View