The history of the Winged Wheel

The history of the Winged Wheel

The winged wheel emblem has long been one of cycling’s most trusted symbols. Cycling UK's Historian Sheila Hanlon looks at the history and use of the famous winged wheel and its importance to Cycling UK’s heritage.

Early club insignias and the birth of the Winged Wheel

When Cycling UK was founded in 1878 as the Bicycle Touring Club (BTC), choosing a club logo was a top priority. Branding was an important part of early cycling club culture and identity. Official colours, uniforms and badges marked organisations as legitimate, fitted the organisational structure of clubs, and gave members a sense of belonging.

Most Victorian cycling clubs had insignias, ranging from stylised bicycles to club initials to coats of arms.

For their first badge the BTC settled on “a small silver shield with the letters B.T.C on a diagonal line.” The club rulebook stipulated that the badge was not to be worn on Sundays. Before long, the badge evolved into a larger shield with the club name written out in full. The badge was manufactured by Marsten, a Birmingham jeweller, and came in several qualities ranging from “warranted sterling silver” to “best plated.” Special badges were made for consuls and councillors, some in red or blue enamel. Prices ranged from two shillings and sixpence to one pound and fifteen shillings. The new logo also appeared on club publications, the masthead of The BTC Gazette and official letterhead.

In 1883, the BTC rebranded itself the Cyclists’ Touring Club (CTC) to accommodate tricyclists. The original shield badge was retained with the club name updated. Like the earlier version, it came in several qualities and price ranges. 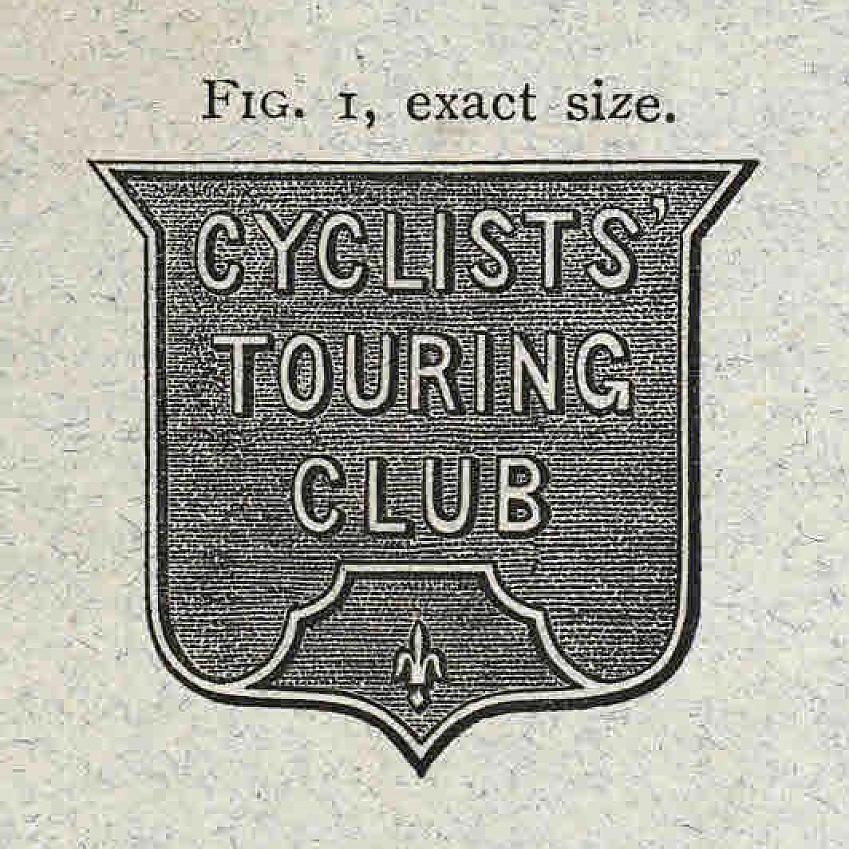 The newest addition was a sterling silver badge with blue enamelling. Members of rank could have their badges customised to show their position, such as ‘RC’ for regional councillors. Photos from the era show club members proudly wearing the badge on their lapels or hats.

By 1885 a redesign was in order. R E Phillips, a CTC life member and publisher of The Cyclists’ Pocket Road Guides, set to work. His iconic winged wheel design was launched in the CTC Gazette in 1886. It featured three wings joined at the hub of a bicycle wheel and surrounded the club’s initials. There is some speculation that the logo may have been inspired by the League of American Wheelmen or Swift Cycling Club emblems. The winged wheel soon became cycling’s most famous symbol.

The new Winged Wheel insignia was integrated into an ingeniously engineered membership locket badge. This round badge was about an inch in diameter. It consisted of two filigree wheels hinged together to hold an annual membership disc. Members pinned the badge to their uniforms as proof of identity to redeem discount at CTC approved hotels or for other club benefits.

The locket badge was sturdy and handsome. As a result many have been handed down through the generations as heirlooms. 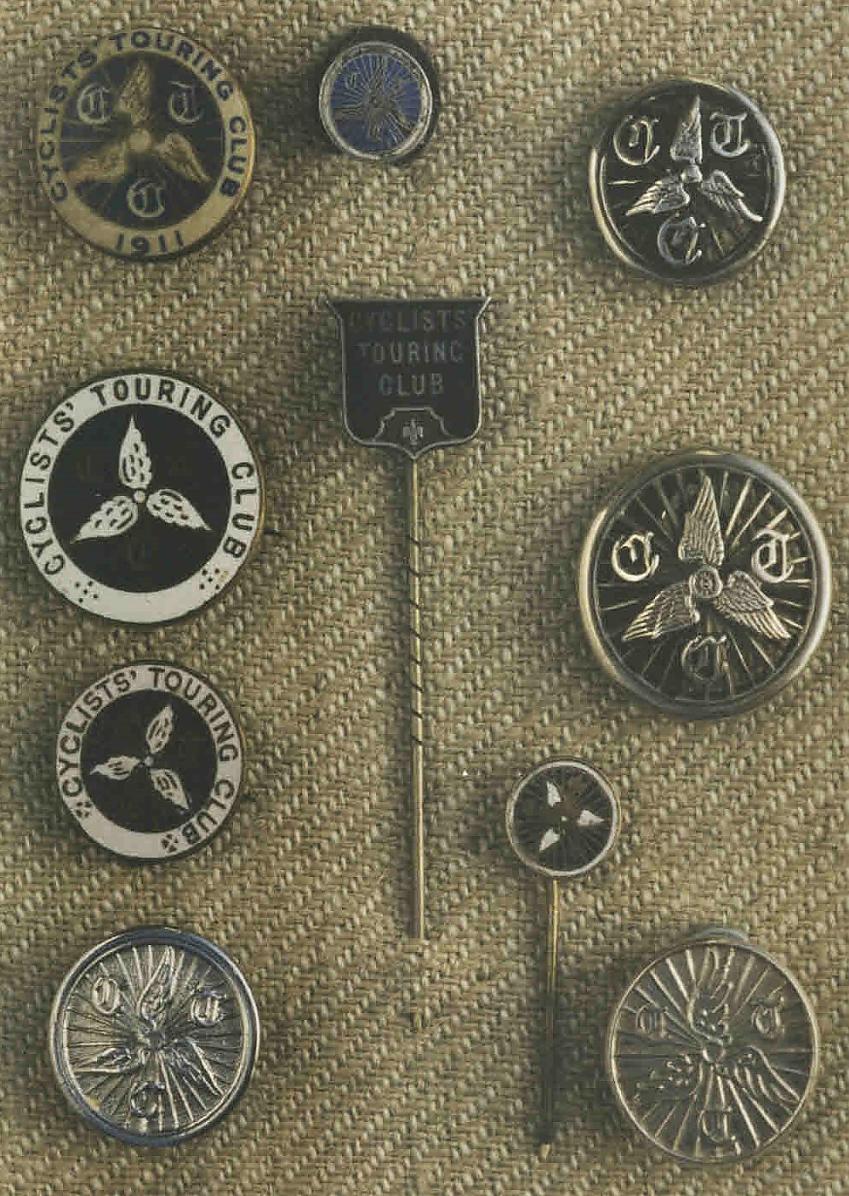 In 1910 a cheap tin winged wheel badge was introduced. The year was printed on the front and membership number on the back. A few rare examples from the era include a small crown, which was added when King George V was appointed Royal Patron.

Enamel badges became popular in the 1920s, showing the winged wheel on a black or blue background with Cyclists Touring Club spelled out on a white border. The font was changed to Gill Sans in the 1950s, a helpful clue for dating badges.

Merit badges were issued as achievements bars, souvenirs of events such as the York Rally, and to mark official status such as 'councillor'. Participants on the CTC’s Cycling Proficiency Scheme launched in 1947 were awarded badges for passing the test. Life member badges can be identified by their laurel design. Many CTC District Associations also had their own badges.

Collecting CTC badges is a rewarding pastime for many cycling enthusiasts.

One of the services that the CTC offered to its members was a system of hotel recommendations and discounted tariffs. By 1881, club founder Stanley Cotterell had nearly 800 establishments under contract.

The hotel directory appeared in the annual CTC Handbook. To be listed as “CTC Headquarters” establishments were required to have a room reserved at all times for the exclusive use of club members. “CTC Quarters” offered accommodation and meals to cyclists at a lower tariff. The programme was later expanded to other services, such as repairers and tailors. This system helped cyclists get out on the road secure in the knowledge that hotels and businesses welcomed their patronage.

A network of CTC approved establishments stretched across the UK, including England, Wales Ireland and Scotland. In July 1898, the Todmorden & District News reported “One of the badges of the Cyclists Touring Club has been affixed on the White Hart Hotel, Todmorden during the past week, indicating to members that it is one of the registered ‘wheel houses’ of the club.”

While touring through Lincolnshire in May 1935, Kuklos (AKA CTC member William Fitzwater Wray) reported in the Daily Herald that as he approached Surfleet “A roadside cottage which displayed the winged wheel tempted me to early tea.” He found himself in a quaint cyclists’ rest set uo by a farming couple to supplement their income from growing tulips.

The worst fate to befall a CTC appointed hotel was to be removed from the directory. This happened on rare occasions where service to cyclists fell below CTC expectations. In 1898, the Hautboy Inn, Ockham was famously blacklisted by the CTC. The landlady refused to serve Lady Frances Harberton on the grounds that she was wearing a rational cycling costume. The CTC took the inn to court, removed its listing and repossessed its winged wheel sign. Damage to The Hautboy’s reputation was instant.

The CTC hotel system eventually fell out of use. Winged wheel signs were slowly relegated to the dustbin of history. Survivors are a delight to discover in situ. Keith Matthews maintains an excellent website recording and mapping CTC winged wheel sign sightings, www.wingedwheels.info. There may be one to watch for on your next cycle tour!

CTC membership, signs and endorsements were valuable assets. As a result, piracy was common. Counterfeit membership certificates allowed non-members to cash in on CTC discounts and benefits. False claims that a service was CTC endorsed brought in business from customers who trusted the brand.

To minimise fraud, the CTC had the winged wheel trade marked. It also applied for a Letter of Patent for its filigree metal membership disc holding locket badges. Several patent applications can be found in the CTC collection at the National Cycle Archive, including British, US Canadian and German patents dating from the 1880s, as well as records from The Trade Marks Journal.

G. Herbert Stancer, club Secretary 1920-1945, issued a strongly worded notice reminding anyone tempted to misappropriate the logo that “As the club badge is registered as a trade mark, and is in addition patented, its use in any shape or form is distinctly illegal unless the license of the Club is first obtained; and steps will be taken in future to suppress the unauthorised use of the insignia.”

Other winged wheel merchandise and uses

Along with badges and signs, the winged wheel appeared on official CTC letterhead, publications, maps, road signs, merchandise and ephemera.

Wealthy Victorian cyclists could invest in gold or quartz scarf pins and watch pendants. The emblem appeared on bicycle and motorcycle handlebar badges in the 1910s. Cloth badges embroidered with silver thread on a dark blue background appeared in 1924. In later years, club colours of yellow and blue were used for the cloth badges. CTC cufflinks went on sale in the 1950s.

CTC danger and caution signs, first introduced around 1884 to warn of steep hills and other hazards, carried the club logo. These signs helped the CTC gain recognition as a lobbying organisation with the safety of all road users in mind.

The winged wheel appeared in some unusual places. It featured at a CTC fireworks display at Crystal Palace in 1899. During the 1978 Centennial, a floral display competition saw gardens across the UK planted in winged wheel designs. Souvenirs have ranged from tea towels to ride pamphlets to ties. A knitting pattern was even produced to add the emblem to homemade jumpers. One of my favourite finds from the National Cycle Archive is a set of CTC playing cards, the perfect thing to have in your pannier for a lonely night in your bivy. 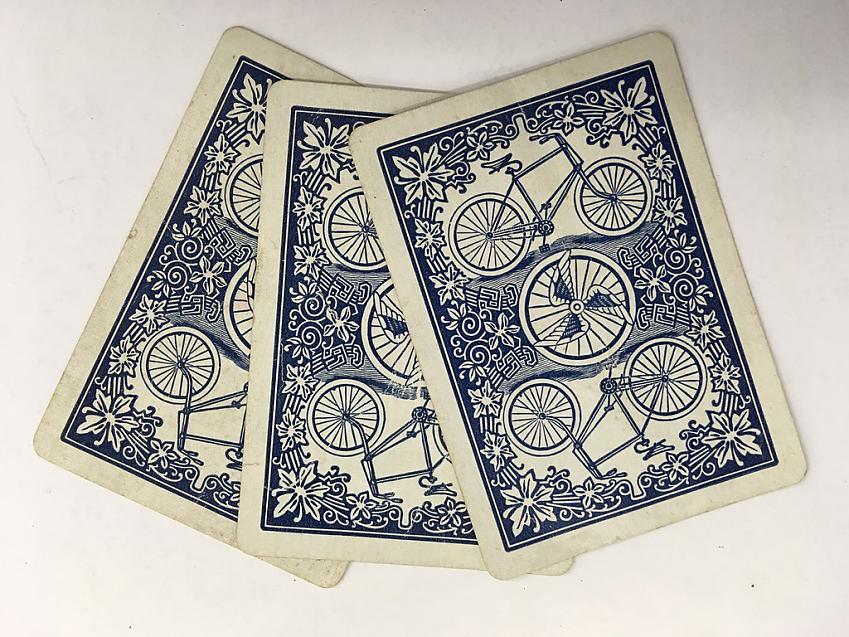 CTC playing cards from circa 1960 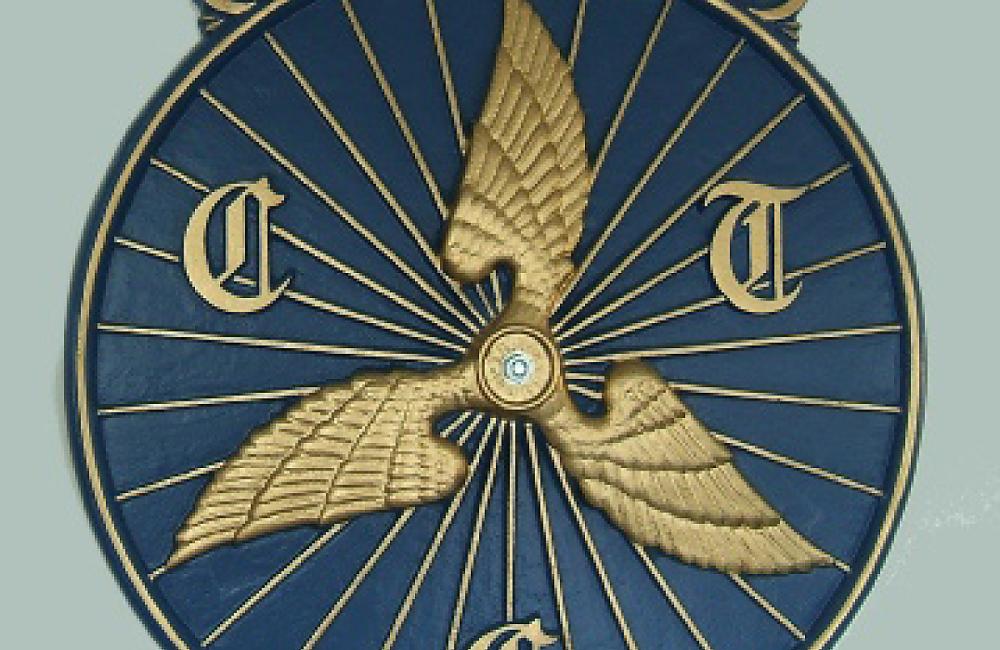 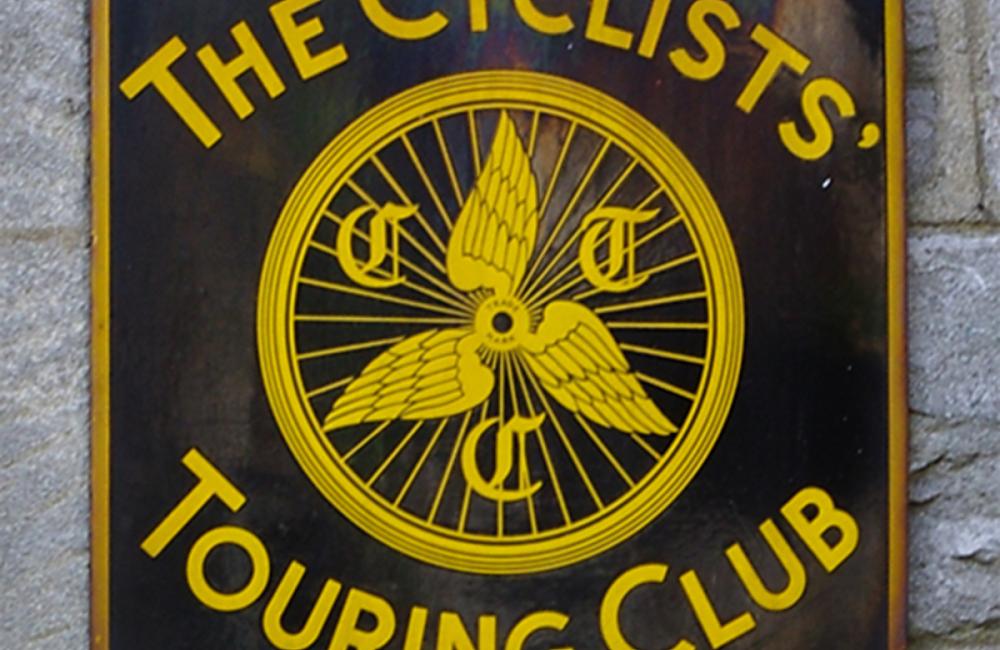 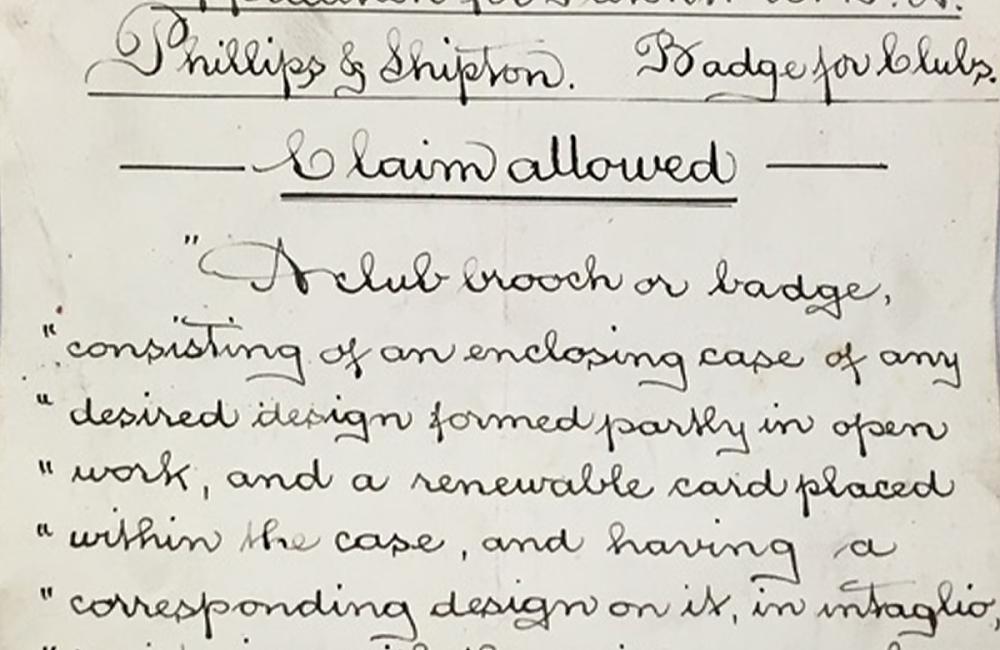 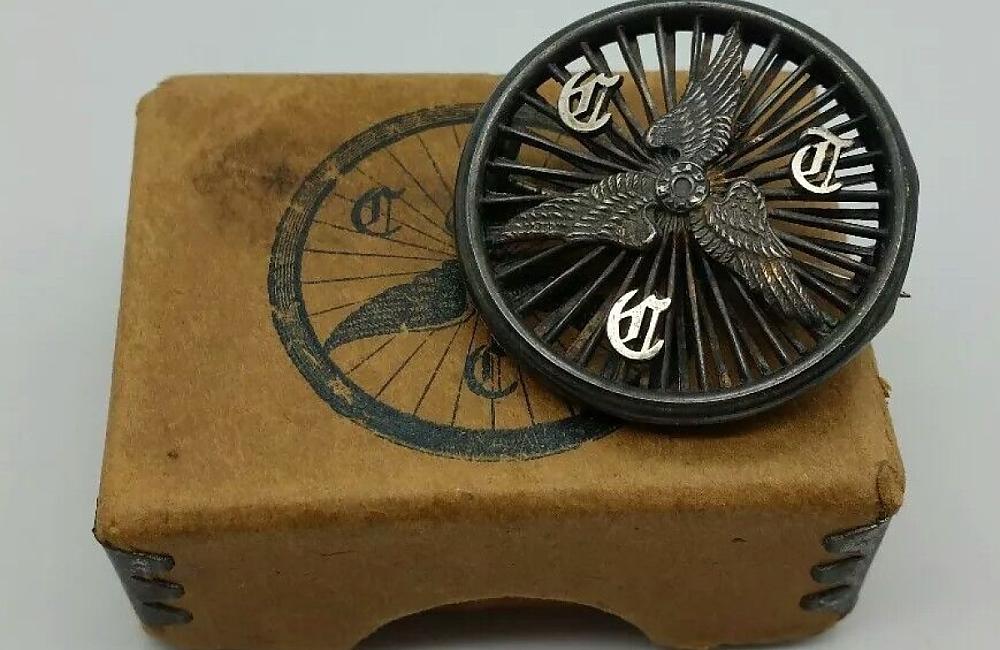 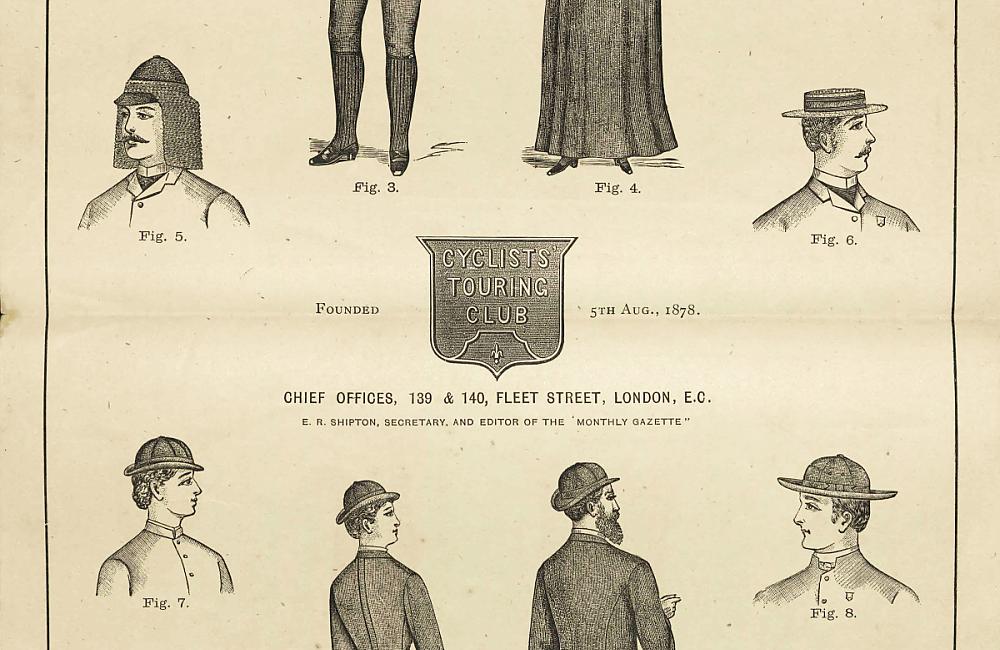 Own your own winged wheel

Origin of the winged wheel

Carlton Reid in his excellent book "Roads Were Not Built For Cars" asserts that the winged wheel was a "blatant copy" of the logo of the League of American Wheelmen. He shows an image of the logo from the LAW bulletin and the two logos are identical except that "LAW" is replaced by "CTC" even using the same font!