Patrick Trainor shares a circular road route around the highest mountain range in Northern Ireland with spectacular coastal and mountain views, a long steady climb, an iconic killer climb and plenty of descending.

There’s a famous song by Percy French called ‘The Mountains of Mourne’ with the chorus line of 'where the Mountains of Mourne sweep down to the sea'.  Standing literally at the water’s edge on the promenade in Newcastle, Northern Ireland, it’s easy to see where he got the inspiration for the song from.

The hulking great mountain which dominates the skyline is Slieve Donard which at 852m is the highest mountain in Northern Ireland. This and the surrounding peaks are the Mourne Mountains known simply to locals as the Mournes.

This area in the south east corner of Northern Ireland is a designated Area of Outstanding Natural Beauty and is a real playground for cyclists with its stunning coastal roads, many different climbs and several purpose built off-road trail centres in forest parks. Thankfully this route circumnavigates the mountains with a flat first half, climbing in the middle before a long descent to finish.

Heading south out of Newcastle on the (A2) coast road towards Kilkeel the road starts to drag slowly upwards after the harbour leaving the town with some steep drops to the sea on your left. The road narrows slightly along this stretch for the next few miles so be aware of traffic as this is a main road. Make sure you take a look back over your left shoulder at some point after leaving the town as the coast sweeps away in the distance with many famous landmarks visible. There ‘s the long foreshore of the town with the majestic red brick Slieve Donard hotel, the world famous Royal County Down golf course (very popular with celebrities as well as golfers), Murlough Nature Reserve and Dundrum Bay right round to the rocky outcrop of St John’s Point lighthouse. 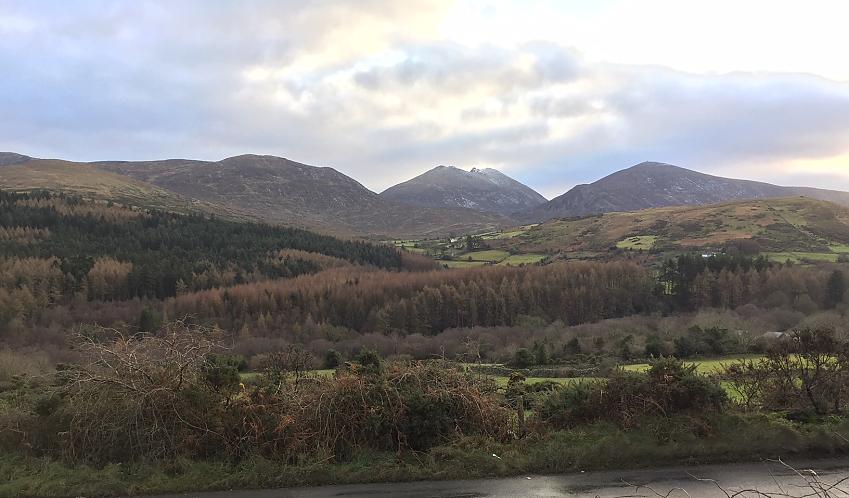 The mountains remain on your right for this entire ride and as you move along the coast your view of them change as they more further back inland. At Bloody Bridge there is an amazing view up in to the heart of the Mournes so make sure you check it out just after the car park on your left.

The road levels out again near the village of Annalong and stays constant until the town of Kilkeel with beautiful coastal views all along this stretch. Go straight on at the crossroads in the centre of town towards Greencastle and it’s into lush green farmland. Take a look at the stone walls in this part of the country and you’ll notice many of them have flat edges. That’s because there was an American Air Force base here during WW2 and the runways were ripped up afterwards when the land was returned to agricultural use.  Many of the farm buildings are old military buildings and the caravan park you pass is actually on a part of the old runway as well.

Follow the signs for Mourne Coastal Route and head for the coast again. The land you see across the water on your left is the Irish Republic, if you fancy a quick jaunt over you’ll shortly pass the Carlingford ferry service which can take you over in 15 minutes. Back on to the A2 you’ll come in to Rostrevor and notice some very big houses hidden away along the shore, this is some of the most expensive real estate in Northern Ireland and looking at the view you’ll see why. Rostrevor is a good place to stop for refreshments as it’s from here the climbing starts.

Turning right just out of the village the road rises through the forest at a steady gradient allowing you to settle in to a rhythm on this quiet back road. Kilbroney Forest on your right contains some of the best mountain bike trails in the north so you might see or hear riders as you climb. Once through the trees it’s a fast open descent for the next few miles.

At the T junction at the end of this road take a right and don’t go hard. Looking straight ahead you’ll see where the road winds up in to the heart of the Mournes. We’re heading towards Spelga Dam and one of the most famous climbs in the area the S of Spelga. These two switchbacks can literally stop you dead as the camber on the corners is so tight and steep. Keep in a low gear going in to them, you’ll have already climbed for several miles before you hit them anyway, and try to stay in the middle if possible. After the S it’s a steep drag up to the dam itself before it opens out on to moorland. It can get very windy up here so be wary.

The views along here are breathtaking; you have the entire Mourne range on your right and in front you have the coastline from Newcastle round to St John’s Point.

The views from up here are incredible as you are right in the middle of the mountains, At the T junction turn left but make sure you have a good look right as the view stretches away down to the coast which you rode past earlier around Kilkeel. The descent from here is fast and straight for several miles and is great fun. Once on the main Bryansford Road it’s a rollercoaster but you hardly have to pedal. The views along here are breathtaking; you have the entire Mourne range on your right and in front you have the coastline from Newcastle round to St John’s Point mentioned earlier.

Turn right at Bryansford and its downhill to the finish passing Tollymore Forest Park on your right, yet another beautiful park on the edge of the mountains. Back in Newcastle where we started there is an overwhelming choice of places to eat or have a cuppa. There are also plenty of ice cream parlours as well and I can thoroughly recommend Nugelato facing the tourist office. The good thing about the cafes here is that they are used to cyclists so you shouldn’t get any funny looks. If it’s a good day, get a take away and sit on the promenade and marvel at the stunning location, where the mountains do literally sweep down to the sea.

Conditions: I did this on a beautiful bright but cold January day. Luckily it was very mild so there was no frost and the roads were dry. The roads are generally in good shape but can be mucky depending on time of year as this is farming country. The descent was cold but there wasn’t any wind so handling was ok, it can be pretty brutal on the tops around Spelga when the wind is blowing and care must be taken.

Accommodation: Newcastle and the immediate surrounding area have lots of accommodation options to suit all tastes and budgets. From the luxurious Slieve Donard Hotel to more affordable hotels as well as numerous B&B’s, a hostel on the sea front and many caravan parks and camping in the several Forest Parks on the loop.

Equipment used: I used a Trek Emonda aluminium frame bike with carbon fork. The Shimano Tiagra 10 speed groupset performed faultlessly as usual as did the alloy standard shallow rim Bontrager wheelset. I was glad of the 34-50 compact chainset on the Spelga climb!

Maps/guides: OS map of Northern Ireland shows the roads or check the GPX file of the route at the bottom of this page.

I’m glad I had… A compact chainset as although the coastal section of the ride has long drags in sections it is flat but the climb to Spelga can literally stop you in your tracks if you are over geared, especially on the S bends.

Next time I would…Make sure I had spare tubes as I realised just before the start I’d forgotten mine and had to visit the excellent local bike shop Mourne Cycles in Newcastle for spares. Bring a gilet, the road from Spelga Dam down to Bryansford is very exposed so take a gilet for the descent, it can be lovely near the coast but bitterly cold up top or out of the sun.

Is Northern Ireland experiencing a cycling surge? View
Cycling UK continues to support the UK to cycle
This remains true during this difficult period with the ongoing threat of coronavirus Covid-19
Read our latest advice on cycling