Exploring the Western Front by bike

Exploring the Western Front by bike

To mark their family involvement in World War One Paula and Richard headed out on their bikes for a week of exploration and commemoration in Flanders and Picardy.

Richard said “There were many moments during the ride that drew out the extraordinary wastefulness of this conflict. One that struck me as particularly poignant, as we cycled through Flanders, was Passchendaele: an astonishing 300,000 casualties to gain just a few miles of waterlogged mud, and then voluntarily give it back within four months because the line was too long to defend and that’s not including the 300,000 German casualties. Cycling through a former railway cutting, back then bitterly fought over, we moved seamlessly from one side of the old front to the other. It was like being in another world. In many ways, it is."

Cycling through a former railway cutting, back then bitterly fought over, we moved seamlessly from one side of the old front to the other. It was like being in another world. In many ways, it is.

Our cycle ride also coincided with several anniversaries. We were in Ypres on 22 April and specific mention is made on this day as in 1915 it was the day when poison gas was first used. Its effect was devastating, and Ypres nearly fell as a result. The Brooding Soldier is the striking Canadian monument that honours the 2000 Canadians overwhelmed by the first wave of gas.

The biggest anniversary we encountered was the commemoration for the centenary of ANZAC Day. This was where the German advance of Operation Michael was halted, and also the day of the first tank vs tank battle. Thousands of Australians had flooded the area for the commemoration and we had fascinating conversations with those who attended, it was a defining moment in Australian history, being marked by a mass pilgrimage of 8,000 people.​

Villers Bretonneux was one of several places off the beaten track that came to my attention when I was following up on family connections with the Western Front. Four of my family members were part of some of the different outcomes and a couple of key moments in the fighting in Flanders and Picardy. 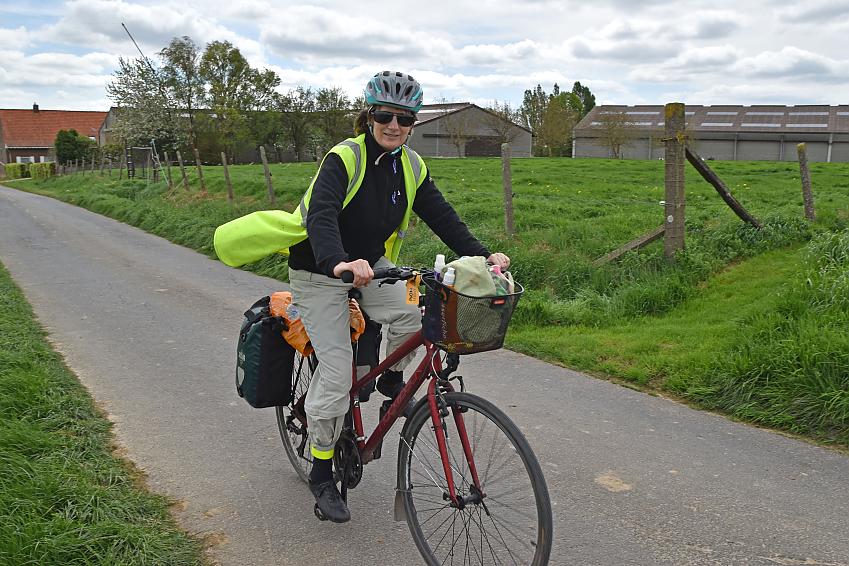 The first person we went to visit was my great uncle Harry. Harry was 21 in April 1917 when he was killed in an explosion of a grenade while on a night patrol in no mans land around Kemmel.

A number of his letters survive. As well as casually commenting on being strafed for Christmas and reporting on the parcels received he writes to his younger brother Bert, as Bert became eligible to sign up.

Bert did indeed sign up and a year later was on the front line in France. By then the front line in the Pond Farm area had witnessed some seismic struggles, notably later in 1917 when 19 massive mines placed at the end of tunnels were exploded simultaneously at key points on the front line. Now the whole area is very quiet. Pond Farm cemetery is located the other side of the eponymous farm, well away from a very minor road.

The devastation in the Ypres area was massive. The whole salient area was within artillery range and after four years of shelling the town was flattened. The careful reconstruction of key buildings to pre-war design says something about how the Belgians wanted to respond.

Something else echoes in Ypres on a daily basis. The Belgians have actively commemorated the fallen each day, whatever the weather, whether anyone comes or not throughout the decades since. The Last Post has been heard at the Menin Gate over 30,000 times now, with the local Last Post Association providing the volunteer buglers. Doing this daily through all these years says a huge amount about the level of gratitude Belgians have for those who fell defending their country.

From Flanders to the Somme

From Flanders we moved to the Somme setting out from Albert on a circuit of the 1916-1918 killing fields which would take us to the other family members on our itinerary.

Charles is one of many who has no known grave. The Thiepval monument to the missing includes the names of many of those who went forward alongside Charles, including Charles himself. 72,000 names, each vibrant person reduced to a few stone carved letters. We do know more than this about Charles. I feel a certain level of connection having (and using) his Shakespeare edition. It bears an inscription which his niece wrote, saying it was his and that he died on the Somme. We also have some drawings and articles he did for the staff magazine of his pre-war employer.

The 15 September is a day of military significance - it was the first day tanks were used in battle. But technology didn't work well on its first use. The operational limits of the new machines were not appreciated, and the four tanks didn't help the advancing infantry as much as they were expected to. When Charles' brigade came to advance, 80% of them were cut down by machine gun fire. Later in the day the remainder of the brigade were among those who did get into the wood.

So, I think Charles was either cut down in the approach to the wood or is one of the 8000 bodies to still lie there with scores of unexploded shells. Although there is a carpet of bluebells there now it is still a dangerous place - do not think of going into this wood if you value your life. Memorials have been added and sit respectfully at its edge.

The fate of Bert

Charles signed up in September 1914 in his 20's. Bert was one of many later in the war who signed up at 18 and were on the front line within a year.

A general approach for a big attack was to saturate the defensive line with artillery bombardment. This didn't necessarily achieve all that was hoped for, as the British army found out on the first day of the Somme.

Bert was wounded in this artillery after a German shell exploded beside him and in the confusion of that foggy morning he eventually managed to find his way without being further injured.

A few days later he was at Villers Bretonneux hospital hearing the advancing German artillery. We left Bert at Villers Bretonneux. From there he was one of many wounded sent back to Blighty. He was the only one from this family quartet who was able to do that and enjoy seeing six grandchildren growing up before he died in his 70’s. 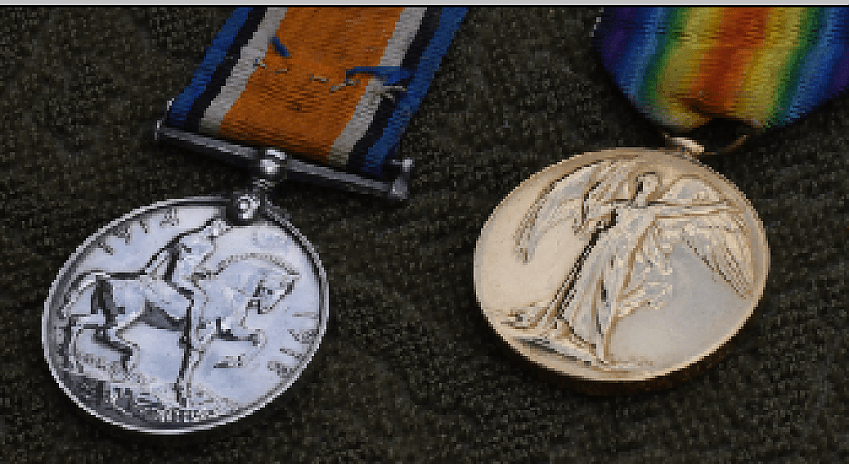 We stayed at the local chateau, a medical base in the war, flattened by 1917, painstakingly rebuilt after the war. A recurring theme.

The final family connection is near to Villers Bretonneux, but dates from 2 years earlier. Lawrence died from wounds on the day after Charles. He has a grave, in a crowded cemetery about 5 miles from Villers Bretonneux, and Albert. Lawrence's family connection is a different one. He was engaged to Bert's sister May Rosa. She never married. It is striking in this cemetery not just how closely crowded the graves are, but how short the period of time their dates mark, another witness to the Somme's devastation.

So Lawrence's family never became related to Charles' family. But Lawrence and Charles, it turns out, were connected in death in a way I hadn't known about. They were both at High Wood. Lawrence's brigade, like Charles' was cut down in the advance on High Wood in the early hours of 15 September. I imagine Lawrence managing to extricate himself from that attack, maybe even at the same point that Charles was killed, bearing wounds, and then dying of them the next day.  Hypothesis? Yes - but not an unlikely one.

I found out many things about the war and about my family's involvement in it, both through preparing for this holiday and while there.

After a litany of cemeteries, memorials and war museums we cycled and ended up in Paris for a day.

Here we went to the Louvre and marked the presence of beautiful things, many exquisitely so, rather than the destruction of people, possessions, buildings, and landscape that we had been charting before. While some of those objects have a darker history, the overall impression is of a different way of living, and an affirmation of life.

The Western Front instead commemorates emptiness, that so many, including young people, still gravitate towards. The silent witness of the Western Front gives some hope of an active will to avoid repeating this sort of international disaster.

Ferry - Hull to Zeebrugge (overnight)
Tip: Cycles go free. Their hearty breakfast sets you up nicely for a full day

Cycle - Zeebrugge to Brugge
Tip: No trains run out of season so we had to cycle this bit. The route in by the canals is worth doing, but you can save some miles/route finding at the start with a short stretch of main road. It has a cycle lane.

Train - Brugge to Roselare
Tip: No need to book bikes. 5 euros for each bike. This short train leg saves time as a packed rest of day awaited

Cycle - Roeselare to Ypres
Tip: The Belgians have a really clever system for plotting, printing out, and following cycle routes. Through it we discovered a really helpful cycle path on a disused railway. Do make the effort to go to the Menin Gate for the Last Post and do arrive early

Cycle - Ypres to Armentieres
Tip: The museum in Ypres is excellent. Do go into the cathedral and St George's Church as well. Plenty more sites of interest like ‘Plug Street’ as well as those I’ve mentioned.

Train - Armentieres to Albert
Tip: French regional trains have very generous space for bikes compared to UK regional trains. Bikes go free (unreserved). If the trains are on strike the restricted timetable they publish does operate. Get to the train early if you can if you need to use one of these.

Cycle - Albert  to Longueval (High Wood)
Tip: Not many miles but loads to see so leave plenty of time. At Thiepval you can ask  at the desk if they have more info on someone. Cycling gives more space for absorbing it all. There is nowhere to eat in the evening in Longueval.

Cycle: Longueval to Chateau Vermand
Tip: We didn't pass a single open shop. The villages are small and liable to have lost any bakery they may have had a few years ago. One of the few German war cemeteries in the area is here.

Cycle: Saint Quentin
Tip: You can use the Roman Road as a cycle path into Saint Quentin. The cathedral and town hall are impressive. Chateau Vermand is a lovely place to stay but when they say they do evening meals don't expect a restaurant.

Cycle - Chateau Vermand to Corbie
Tip: There is a cycle path by the Somme canal through from Peronne to Amiens

Train - Corbie to Paris
Tip: You can't book bikes onto a Eurostar at Lille so we went to Paris rather than have 3 poorly connecting trains to Brugge. If we'd known about the train strike we'd have done it differently, but we're not complaining about a spare day in Paris!

Lest We Forget: How Cycling UK honours fallen soliders View