The appointment of Janet Atherton as chair of trustees for Cycling UK marks the first time in the charity's history that women have held the top two positions. Communications officer Christina Bengston spoke to Janet to discuss what this means for women’s cycling

The newly elected chair of trustees, Dr Janet Atherton OBE, has been on the board for more than four years and took up the role of chair on 1 January 2021.

“I absolutely buy into the goal of getting millions more people cycling,” says Janet. “I want to see Cycling UK continue to build a social movement to get people out on bikes.

“I want to see people from every background cycling, and whatever reason people want to get onto a bike, they need to be safe and confident to do so. I want Cycling UK to build on the work we do to improve cycling infrastructure, so people are safe and supported to get out and experience that enjoyment of cycling.”

With the recent appointment of Sarah Mitchell as chief executive of Cycling UK in 2020, this marks the first time in Cycling UK’s history that women hold the top two positions in the charity.

“As an organisation we have done a lot to promote women’s cycling,” Janet says.

The Women’s Festival of Cycling (WFoC) is taking place for the fifth time in July 2021 during which Cycling UK will be inviting women to join organised rides and digital events, giving advice and sharing cycling tips to encourage more women to start riding.

The festival aims to empower more women to feel confident to cycle and will be celebrating achievements through the 100 Women in Cycling.

While the organisation of the WFoC takes place from Cycling UK’s head office, Janet notes that much of the important work happens at the grass-roots level.

“Locally, my cycling group has organised a WFoC ride in the Wirral and it's just such a fantastic thing to do in terms of getting people who have probably never ridden a bike more than five or 10 miles and suddenly they’ve done 35 miles.

“Seeing the confidence boost of the women participating, because they’re finally getting the support they need, is amazing.”

Now a ride leader and member of two local groups, Janet wasn’t always a regular cyclist. Like many of us, after leaving home to attend university, she put down the bike she had used to travel to and from school and moved on.

Years later when working as a Director of Public Health in Sefton, Merseyside, she was invited to participate in a cycle ride on the Trans Pennine Trail.

Janet hadn’t cycled for many years and decided to get some help.

“Just from an integrity perspective. I didn't want to be photographed on a bike that I wasn't going to be able to ride on,” Janet explains. “So, I asked the local cycling development team for help,” said Janet.

I didn't want to be photographed on a bike that I wasn't going to be able to ride on. So, I asked the local cycling development team for help

“They took me to a cycle track, and we had a very wobbly lesson, Riding around cones and practising stopping and turning.

“At the end of the session they actually got me out on the road, cycling in traffic – something I never thought I could do.

“When the Trans Pennine Trail event came, I was actually able to ride the first 18 miles of the route that day.”

After that first foray, Janet had caught the cycling bug. She bought her own bike with the help of the cycling development team and the cycle to work scheme and started riding regularly. 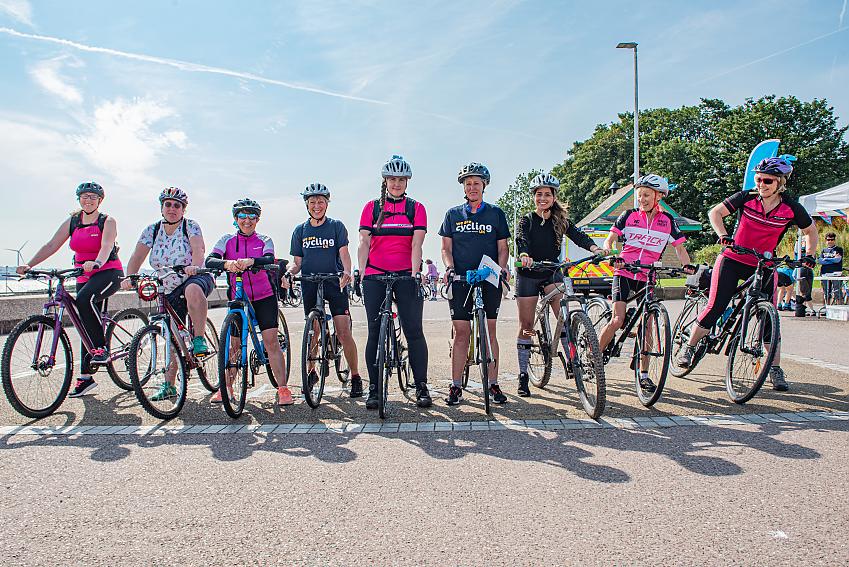 Women's Festival of Cycling event on the Wirral

A year after Janet started riding local cycle routes by herself, she was keen to explore more and meet other like-minded cyclists.

“I came across the Chester Fab Ladies,” she says, “which is a Cycling UK group that links Chester and North Wales.

“I had a really quite fabulous time there, and it was then that the social side of cycling really came to life for me.”

Janet went on to join the Wirral Bicycle Belles and notes the influence of the very first woman listed on Cycling UK’s 100 Women in Cycling, Janet Gregory, for encouraging her to go onto become a ride leader.

“Janet Gregory has established a fantastic group of women whom she has supported and encouraged to take cycle leadership roles in the group, including me.”

Two years later, her Trans Pennine Trail work ride took place a second time. Janet was there with them again, but this time, cycling the whole route.

For me the social side of cycling is really important. I’ve made some fantastic friends through cycling

Janet describes herself as a social and touring cyclist.

“For me, the social side of cycling is really important. I’ve made some fantastic friends through cycling.”

A space for women

The importance of providing women-only and women-friendly rides, is something Janet has personal experience of.

“I do think there’s a definite place for women’s-only rides. As a ride leader with the Bicycle Belles I’ve seen the benefits to people.

“There’s a very different feel in a women's-only ride to that of a mixed ride,” said Janet. “For somebody who's just coming into cycling, it's a supportive atmosphere. There's no element of competition.

“When you talk to people about their concerns before they join a cycling group, it's often thoughts like ‘I'm not confident that I'm going to be able to keep up’, and that can be a significant barrier stopping people giving it a go. We have to provide environments for people that help overcome those barriers and make people feel comfortable.

A vision for everyone

Janet’s vision for the future of Cycling UK is of complete inclusion.

Cycling UK will continue to strive to be an organisation that welcomes everybody. Where people can find their place, however they want to do it

“Cycling UK will continue to strive to be an organisation that welcomes everybody. Where people can find their place, however they want to do it.

“Having been a trustee for four years, I could see just what a fantastic organisation Cycling UK is. What we're trying to do is important, and we’ve achieved a lot in the past four years, but it feels like we could do so much more and I’m excited to play my part in it."