Cycling without borders in Northern Ireland

Cycling without borders in Northern Ireland

Northern Ireland has been in the spotlight with continuing uncertainty over customs and border controls in 2022. With the coronavirus crisis affecting tourism, Cycling UK looks at what that means for cycling in the country

Tourism has been on the increase in Northern Ireland in the last decade, with the combination of beautiful scenery and a low population creating the perfect destination for outdoor activities, including cycling.

The success of TV fantasy series Game of Thrones has played its part, showcasing everything from craggy mountains and spectacular beaches crowned by dramatic clifftops, to gentle rolling hills and moorland. But the main driver behind the change is the legacy of the 1998 Good Friday peace agreement and the resulting investment in tourism, with the number of hotel rooms in Northern Ireland doubling between 1999 and 2019.

Now the country is facing the twin challenges of the coronavirus crisis and the extension of the Northern Ireland Protocol, which means remaining on EU terms for the movement of goods and services, both of which have particular implications for the hospitality and tourism sectors. But what about the cycling sector?

With the UK post-coronavirus cycling boom extending to Northern Ireland, the result, similar to the UK as a whole, has been a shortage of bikes and parts which shows every sign of continuing well into 2022 and beyond.

Tim Edgar of Big Loop Bikes, which is part of the Turnaround Project set up to support work placements for people exiting the justice system, explained the problem:

“We’ve faced a double whammy of Brexit and Covid, which has made for an unhappy combination as the supply of parts and bikes is extremely tight. We’re registered with all the big distributors in the industry but they are struggling to get stock.”

There are signs of hope on the horizon, according to Tim:

“Shimano is increasing factory capacity but there’s a lag so the lead time for some parts could be 2023.”

This has led Tim’s project to take a different approach to obtain the parts they need to carry out servicing and repairs along with refurbishing donated bikes at their base at Queen’s University.

“We’re having to look around and lean on local bike shops to help us up with sourcing parts like cassettes or chains when we need them for a customer. This isn’t ideal as we have to buy at retail price but the plus side is that local bike shops are getting some business. Cycling sales have grown but mostly through e-commerce.”

While he welcomes the greater numbers of people cycling, it has had a knock-on effect on Big Loop’s work, with fewer bikes being donated.

“We’re a social enterprise working in the circular economy, so we need people donating bikes to survive. But with more people interested in cycling due to Covid, they’re not donating old bikes from their sheds and garages to us – they’re using them!”

... with more people interested in cycling due to Covid, they’re not donating old bikes from their sheds and garages to us – they’re using them!

Despite this, demand for servicing and repairs has exceeded Tim’s expectations since Big Loop Bikes went live 14 weeks ago.

“You can’t get servicing and repairs online so that helps us. We’ve had 1700 people come to our online booking portal in that time and 100 have already booked themselves in. I only have one part-time mechanic along with volunteers, who we train in bike maintenance, so demand is higher than what we can supply in terms of time and parts.”

In addition to the shortages of parts and bikes, the political situation relating to Northern Ireland leaving the EU but seeking to avoid a hard border with the Republic of Ireland presents another challenge according to Tim.

“The customs and border control uncertainty is creating a lack of stability and a highly sensitive political situation which can only make things worse,” he said. 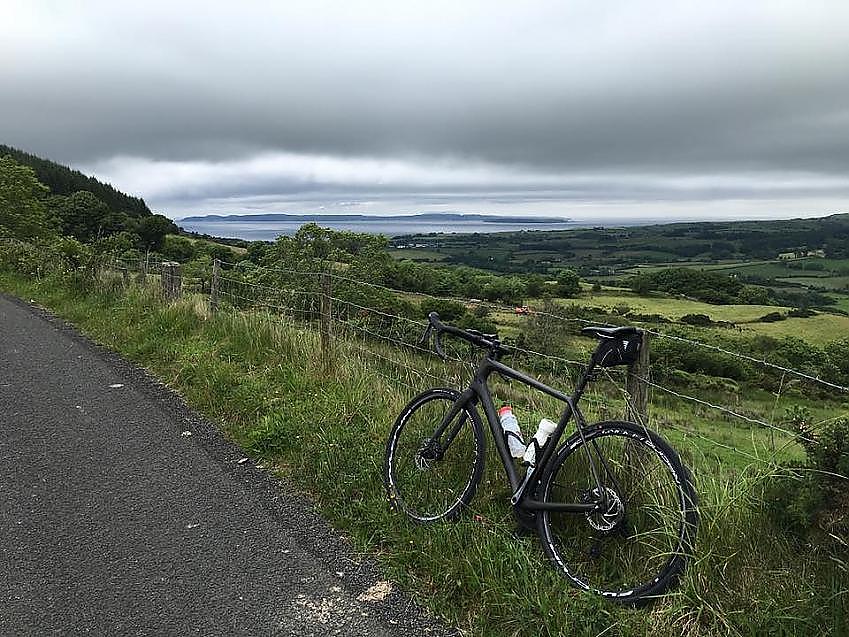 The view from Torr Head near Ballycastle. Photo: John Madden

One group used to weaving around the border between the two countries is CTC Northern Ireland. A close-knit group of 50 members, many attend the Wednesday Wobbly Wheelers rides organised by Roy Dugan and Ivan Reid. With free rail and bus passes offered to over-60s in Northern Ireland, the group can extend their rides using the train, although the coronavirus crisis has limited this.

Roy said: “We aren’t using trains at the moment as we found that some passengers weren’t wearing masks, so we’ve just been going on rides in the local area, usually around 25 miles before a picnic lunch, then the possibility of a café stop at the end. It’s a bit limited as things got messed up with the coronavirus crisis.”

The group’s rides are often cross-border, with this presenting no problems, according to Roy:

“We often ride over the border and it’s completely seamless. The signs change to kilometres instead of miles and the road markings are different but that’s all. Even better, close to the border you can pay with either sterling or Euros too.”

One recent experience served as a reminder of the difference between the two countries’ approach to the coronavirus crisis, however.

“We had to eat outside a restaurant in the rain because to go inside you needed to show an EU digital certificate as proof of vaccination and we didn’t have that as it wasn’t available in Northern Ireland at the time.”

Andrew McClean, Cycling UK development officer for Northern Ireland, agreed that the area has much to offer cyclists despite a historic lack of investment in infrastructure such as segregated cycle lanes.

“I would say that the coastal route from Ballycastle all the way to Derry is still one of the top rides in the UK in terms of scenery and places to stop and stay. It takes in the Giants’ Causeway, Carrick-a-rede rope bridge, some of the most beautiful beaches in the world and the historic walled city of Derry/Londonderry.

“Belfast is also a great place to cycle round – it’s small and flat with plenty of restaurants, pubs and accommodation. The Maritime Heritage Trail which was launched by Cycling UK in May 2021 really shows what a force Belfast was during the industrial revolution.

“It’s four miles long and links the communities of East Belfast and Sailortown, passing noted sites like the Harland and Wolff cranes and Big Fish sculpture, celebrating the maritime history and the people who worked in shipbuilding and related industries.”

Interest in cycle commuting in Belfast has also increased in recent years, with more people taking to two wheels to get around the city, some using the network of cycle paths based on old railway lines.

“Things have changed for the better – I worked as the cycling development officer for Cycling UK in Northern Ireland until eight years ago, and I’ve been commuting in and out of Belfast for 20 years.

“In the past you wouldn’t have seen that many people cycling, whereas now I see a lot more, including plenty of parents cycling with kids in tow, so that is encouraging.”

While the impact of Brexit and the coronavirus crisis on life in Northern Ireland have yet to be fully realised, it is reassuring to know that more and more residents are enjoying cycling for transport and leisure, and that Northern Ireland remains an excellent cycling destination with much to offer visitors in 2022.