The Cathedrals Cycle Route, which links all 42 Church of England cathedrals in a loop measuring almost 2,000 miles, was launched at the start of Bike Week 2021. Its creator, Shaun Cutler of Northumbria University, set off on 30 May, the day of the World’s Biggest Bike Ride, to carry a relay baton around the whole route, which he completed six weeks later.

During the relay ride, Cycling UK member David Goodman travelled from his home on the Isle of Wight to meet Shaun and his riding companions as they reached Portsmouth Cathedral. David has a particular affinity with the route that Shaun designed because he completed a similar ride – and even went two cathedrals better – more than 20 years ago.

In the year 2000, at the age of 56, David cycled 2,008 miles to raise funds for a local hospice and the charity RoadPeace. In addition to visiting the 42 Church of England cathedrals, David visited Scotland and Wales: he began his ride at St Mary’s Cathedral in Edinburgh and ended it at Brecon Cathedral. 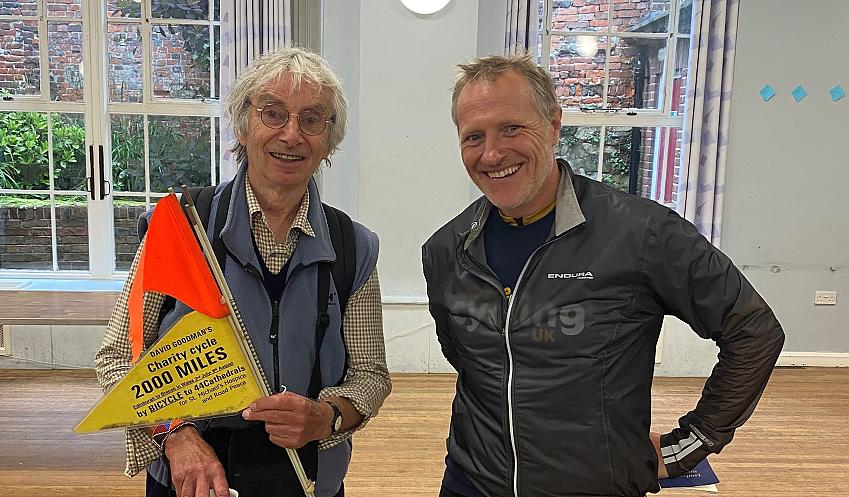 David, who was living in Herefordshire at the time, was inspired to raise money for St Michael’s Hospice in Hereford, where his sister had been cared for. “In 1995, I met a man called Harold Blackey at St Michael’s – this was the same year that my dear sister passed away at the hospice,” David explains. “Harold was a keen cyclist, over 70 years old, who the year before had cycled to 15 cathedrals to raise money for St Michael’s. That year I decided to follow in his footsteps and do exactly the same journey he did, to raise more funds.”

Five years later, he decided to do a similar ride but on a much grander scale, so he plotted his route around 44 cathedrals from Edinburgh to Brecon. This time, as well as fundraising for the hospice, David also wanted to raise money and awareness for RoadPeace, the charity for road crash victims. He carried a letter from Road Peace addressed to the Bishop of each cathedral telling them about the Day of Remembrance Day for Road Traffic Victims which is still observed in November each year. 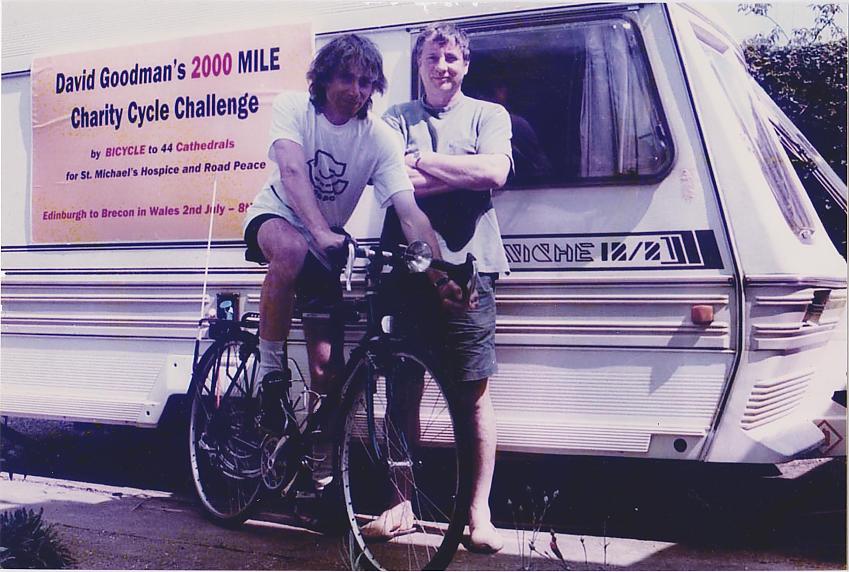 David with his brother Ken and the back-up caravan

On 2 July 2000, David set off from Edinburgh, on a factory bike loaned by Orbit Cycles of Sheffield. For the first 14 days, he cycled with full camping gear, packed into two large panniers and a shoulder bag. After two weeks and 985 miles, he was joined by his brother Ken, and Ken’s cocker spaniel, Spike, who had borrowed a caravan to use as a back-up vehicle. “During this time I had Ken and Spike’s company, as well as a cook and tea-maker for breaks on the road.” It also meant he could dispense with the panniers and put the shoulder bag on his rack – “what a luxury!”

The journey lasted from 2 July to 10 August, of which 31 days were spent cycling. “I had two days off with relatives in Wallasey, two days off with my parents in Kent, and four days in my own flat after visiting Worcester Cathedral.” At each cathedral he bought a guide book to learn about its history and architecture – and following his visits, many of the cathedrals held a service for road traffic victims to mark RoadPeace’s remembrance day.

A journey of this magnitude allowed David to see some of the best and worst aspects of cycling in Britain. Much of this, perhaps fittingly given that he was raising awareness for road traffic victims, was linked to motor vehicles. “I saw all the litter on the side of the road and wondered what makes people do this.

“I had verbal abuse directed at me for merely being on the road and a cyclist – on one occasion having a hard plum thrown at me from a passing car full of jeering youths.

“The absolutely terrible state of disrepair of a lot of our roads, particularly near the kerbs, means cyclists have to avoid potholes and sunken or missing manhole covers.

“But most of all witnessing some terrible driving, including one driver pulling out from a side street into my path – not even looking at me and he had a mobile phone to his ear.” 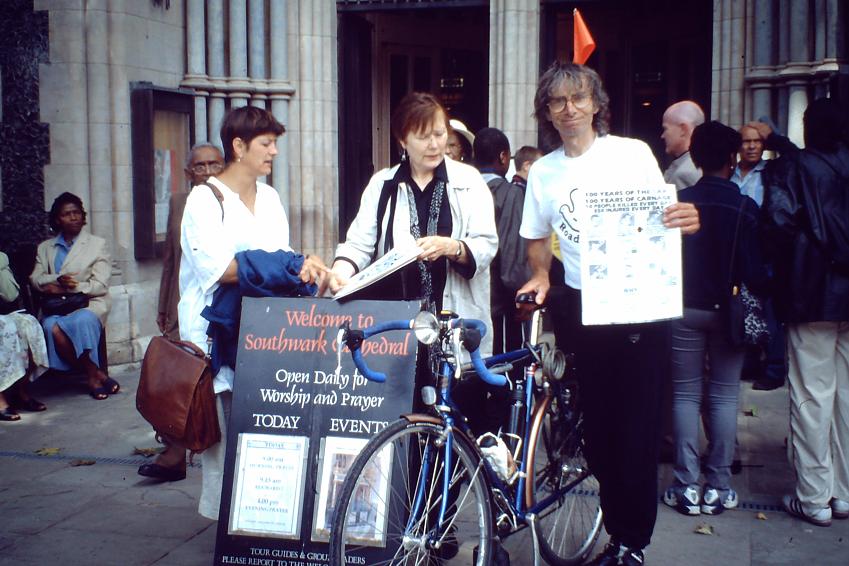 David with representatives of RoadPeace at Southwark Cathedral

But outweighing this was the joy of seeing cathedrals and countryside, meeting old friends and family as well as new faces along the way. “There were lots of good memories evoked by my journey around the country: places where I have lived or visited over the years; people I had seen again after years and was inspired to meet again.

"I remember a great evening stopping with friends and family who lived next to one of the creeks in south Devon and we hadn't seen for years – all the good food, chat and hospitality. Meeting new people, especially at the youth hostels: a visiting choir member from New Zealand in Lincoln, a group of Jehovah's Witnesses in Norwich. And the generosity and support of so many people."

Now, at the age of 77, David is still cycling on his old Bob Jackson machine and Brompton folding bike, and last year he bought a new Kalkhoff electric-assisted cycle to help tackle the steep terrain around Ventnor where he now lives.

The more people who follow David, and more recently Shaun, and see Britain by bike, the more pressure there will be to tackle the negatives that David experienced, and make cycling safer and more pleasant for all of us. The Cathedrals Cycle Route should encourage people to do just that. “It is wonderful that Shaun has inspired so many people to join in the relay to take the baton to all the cathedrals,” says David. “It was great to meet him when he arrived at Portsmouth Cathedral.” 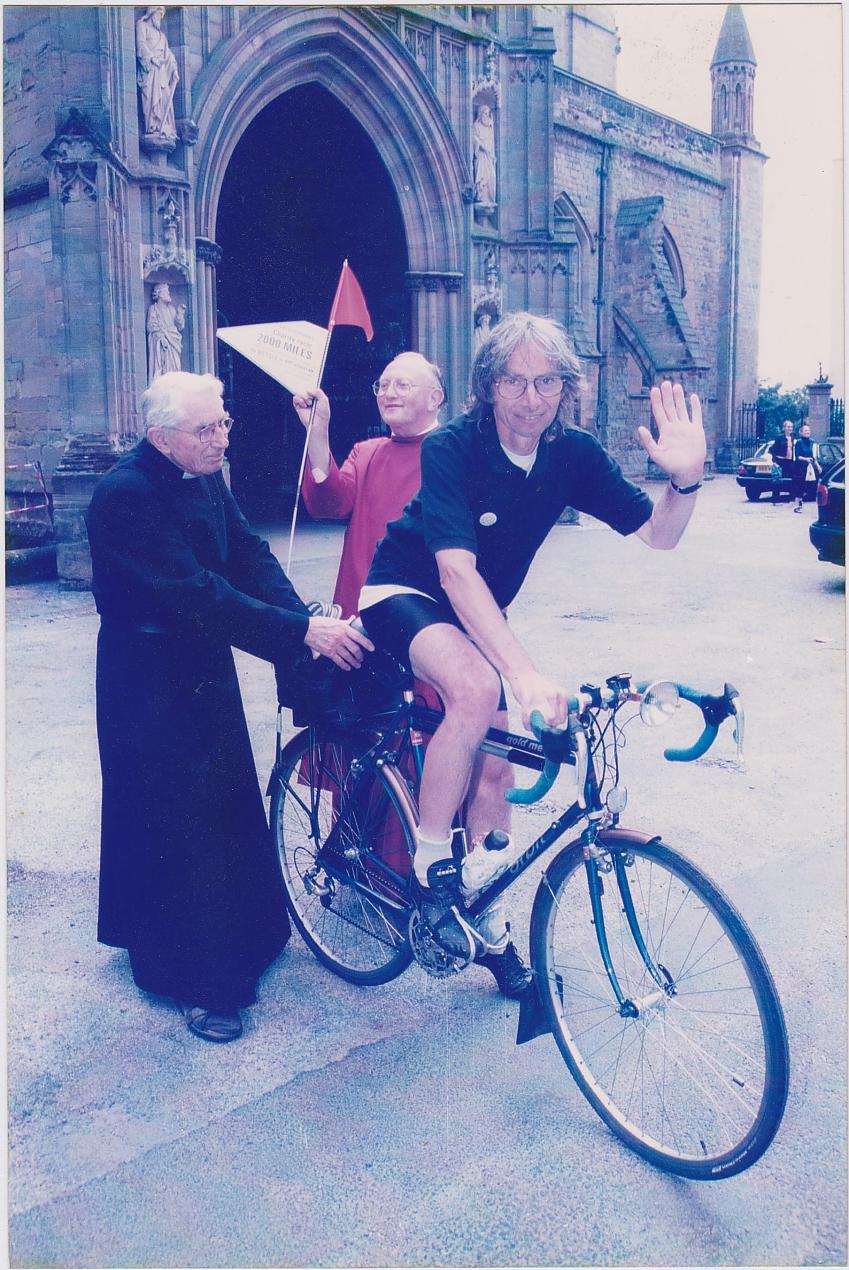