Cycling their way to a healthier future

The Cycle for Health scheme has been running for three years

Cycling their way to a healthier future

Dan developed depression after a bereavement at university. Andrea tends to isolate herself. Both have been prescribed cycling for their mental health as part of a ground-breaking referral scheme – and both say it’s transformed their lives.

At its worst, Dan’s depression meant he was unable to get out of bed for four days. He lost all motivation and spiralled further into hopelessness as he hit an all-time low.

Dan, who’s 31 and from Featherstone, near Wakefield, has struggled with depression and anxiety for around 15 years, but last year was introduced to Cycling UK's Cycle for Health programme.

He joined a small group at an athletics track away from traffic, and where he was able to  build his confidence and bike-handling skills. 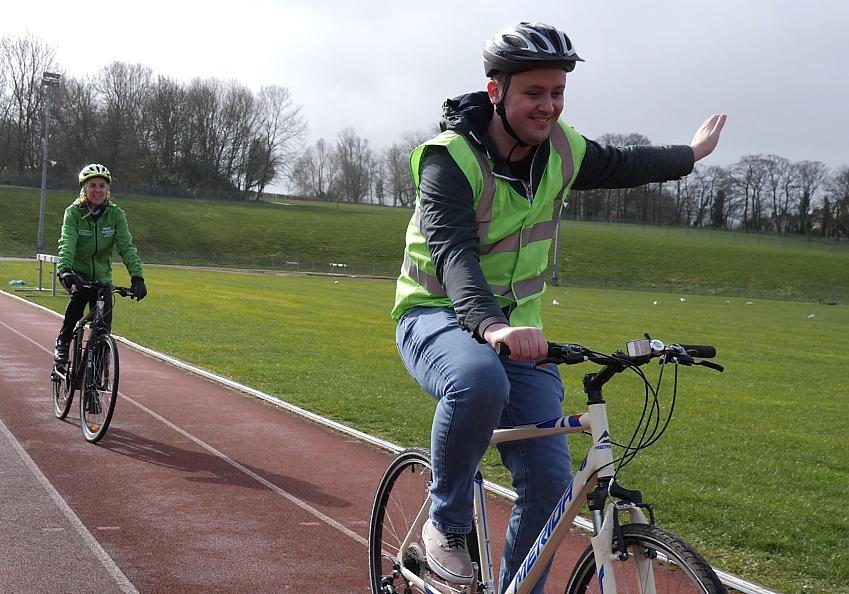 Dan says cycling has helped with his mental health

We did a little bit of cycling around the track just to get used to the bikes, then a bit of gear changing and graduating to doing some signalling, looking behind while trying to keep a straight line, which was a lot harder than I expected it to be.

And while the course has boosted his mental health, it’s had the unexpected side effect of improving his physical health too.

“You might have a bad week and you’ve had this to look forward to, and you’d come here and you might feel a little bit low, feel a bit tired, a bit drained but you’d leave it feeling invigorated and energetic. You might be a little bit sore but it’s a very positive thing,” Dan said. 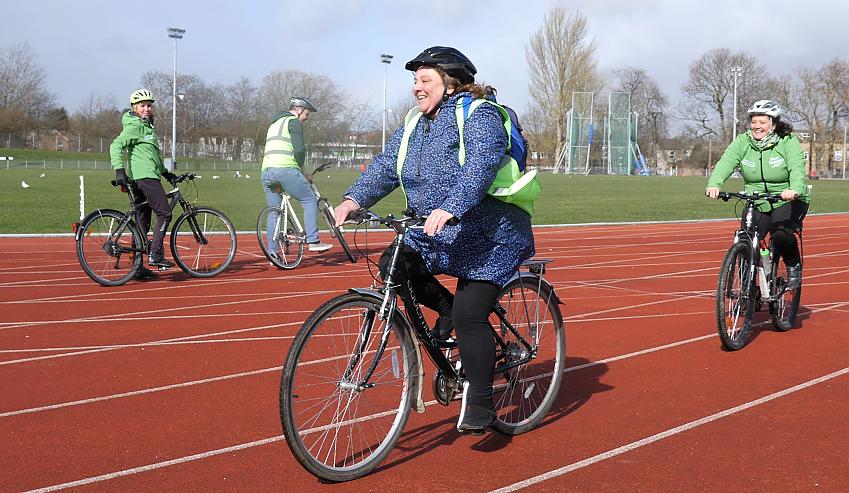 For Andrea, 47, from Wakefield, the course has been an opportunity to meet people and make friends, a remarkable achievement for someone who admits to suffering from anxiety and who tends to withdraw from society.

I hadn’t been on a bike for years and years. I couldn’t get on or dismount safely, so it was really learning the basics.

“We did all sorts of activities, weaving in and out of each other on the bikes and going through cones. We learnt about balance and safety checks; I didn’t even know where the front and back brakes were! I learned everything from scratch," she said.

And like Dan, she’s seen a huge difference in her mental health. “I’m more confident. I’m able to be out with other people, more than I would normally. And health wise, my fitness has improved.

"My lung function is a lot better than it has been and now I actually want to go out and do other things, and keep cycling, keep active and really start living my life.”

Cycle for Health,  funded by the West Yorkshire Combined Authority’s CityConnect programme, is now in its third year in West Yorkshire, proving the power of cycling on physical and mental health.

At the start of the programme, more than two thirds of those who took part admitted they weren’t doing the recommended levels of physical activity a week.

By the end of the programme, that had dropped to a third, with almost 80 per cent reporting their fitness had improved.

Mental health represents the biggest single cause of disability in the UK. This year, around one in four people will experience a mental health problem, and it will cost the NHS more than £22bn.

Cycling, and physical exercise in general, may not be the single solution, but it certainly can have a significant part to play, particularly with illnesses such as depression and anxiety.

Referrals to the Cycle for Health scheme have come from GPs, hospitals, clinical commissioning groups and mental health charities.

Jacqueline Sharp, an occupational therapist based at the Fieldhead Mental Health Hospital in Wakefield, said: “We’ve seen some really positive benefits, for example people who were having difficulty motivating themselves, even coming out of their bedroom, who were looking forward each week to doing the cycling.

"And the difference in people’s energy levels when they came back from having done this really enjoyable activity was really evident.”

The programme, as its name suggests, is not only about tackling mental health but physical conditions too.

Tom Murray, Cycling UK Project Officer, said: “We get people coming who may be in remission from cancer. We also get people with type 2 diabetes, or they may be recovering from surgery, a hip operation, for example.

"Obviously many people come to help their mental health, as it helps with confidence and low esteem but it’s a wide and varied catchment.”

In Eccles, in Greater Manchester, where a similar pilot scheme has been running, Yasma, 60, joined the programme as a way of getting back to cycling after developing osteoarthritis in her knees, and losing her confidence to ride.

Her instructors helped her with her saddle height and explained she was gripping the handlebars too tightly. Small changes that made a huge difference. 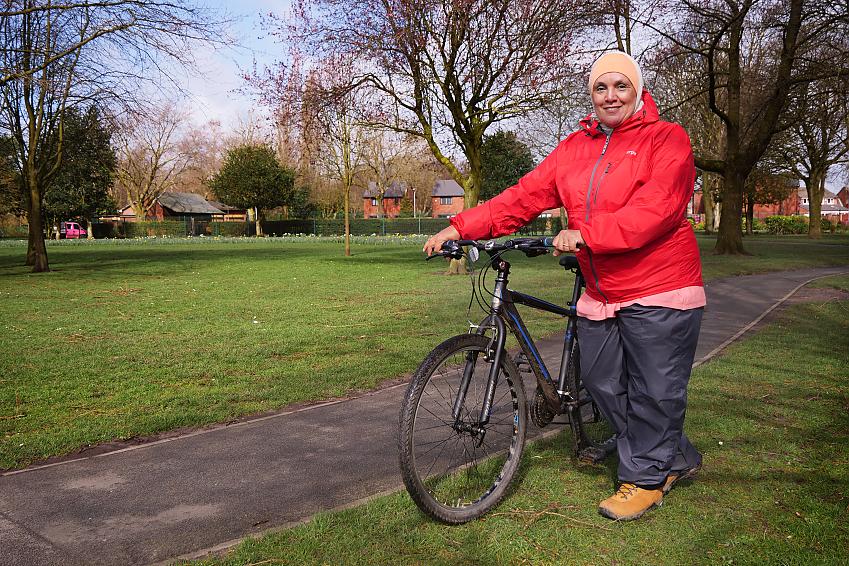 Yasma joined the Cycle for Health programme to regain some fitness

She said: “I was finding I was having difficulty breathing because I wasn’t using the gears correctly, so I was fighting myself on the bike. Now I have more stamina and I’m less out of breath, and it’s improved my confidence.”

Jo Amess, a Cycle for Health Guide Ride Leader, said: “The aim of the Cycle for Health scheme is to get people active, so if you’ve been inactive previously or if you’re not really into sport, it’s getting you out there and trying to get you to do that on a weekly basis.

“One of the biggest differences I have seen with people is as the weeks progress, they get chatting with each other, talking as a group and the confidence from week to week just grows. And that’s just through riding a bike.” 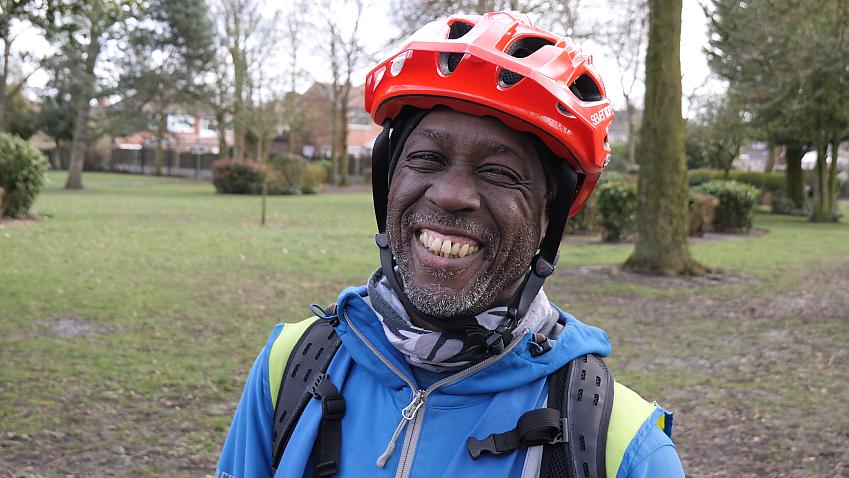 Paul Pryce, a cycle instructor who worked on the Cycle for Health pilot scheme in Manchester, added: “Initially some people aren’t sure they can ride a bike. It might have been ten or more years since they last tried, and usually within five to ten minutes they’re doing loops and grinning, and they remember what it was like when they were a child. And that’s a big leap forward for them.”

While there is plenty of anecdotal evidence that cycling has a positive impact on mental health, there is surprisingly little conclusive medical proof.

Last year, Public Health England published a paper on the health benefits of cycling and walking, which was debated in the House of Commons.

It found strong evidence of the physical benefits of active travel, but discovered too few studies had been carried out on the mental health benefits to draw a definite scientific conclusion.

The studies it did consider appeared to indicate that cycling had a positive effect on psychological stress, social isolation, loneliness and feelings of well-being.

However it found that: “While there remains insufficient direct evidence specifically pertaining to cycling, there is strong indirect evidence for the benefits of leisure time physical activity . . . on mental health.”

“A growing body of direct evidence supports specific physical and mental health benefits for both walking and cycling.”

Find out more about our Cycle for Health programme.