Cycling UK supporter Ian Ducat tells us about his Cape Argus exploits in South Africa, one of the largest sporting events in the world.

After a 40+ year cycling ‘career’ and never having entered a competitive event I broke with tradition in 2008.  That’s why, before I left the UK in early February, I was training 4 or 5 times a week. Not exactly preparation for the Olympics but an hour a day was enough to lose a bit of weight and regain some fitness (modest reductions in wine consumption helped too!)

This the fifth year I’ve entered for the Cape Argus – or to give it its full title “The Cape Argus Pick n Pay Cycle Tour”– a 110km on-the-road cycling extravaganza that is the worlds greatest one day [individually timed] cycling event in the world. And that’s not just my not-so-humble opinion: thousands of cyclists annually agree with me! 35,000 have registered for the 35th, 2012 Argus. Every year, local riders are joined by international visitors, normally over 2500, “keen to experience the beauty, drama and excitement of this amazing race” according the Argus Press Office. But this for once is not hyperbole from the PR machine. It’s really true.

Famous cyclists who have participated in the Cycle Tour include Tour de France legend Lance Armstrong, movie star Matt Damon and former tennis champion Gabriella Sabatini. Daley Thompson will apparently ride this year. Because much of the event takes place in Table Mountain National Park, the Cycle Tour also sports one of the best Environmental Management Plans in the world. A full clean-up team ensures that there’s no litter left after the event, and a comprehensive recycling campaign sees up to 98% of all waste generated by the event being recycled.

Starting and finishing in “The Mother City” of Cape Town the route of the Argus takes the cast of 35,000 around the Cape peninsula to enjoy some of the most spectacular coastal scenery anywhere in the world. But that’s where the enjoyment will end for anyone who neglects to do at least some preparation. This is not a gentle day out for those likely to suffer an allergic reaction to an increase in their heart rate. Coastal it may be but the Cape coast is not flat.

The 110km Argus route involves some serious physical challenges. There are 5 major climbs, but if cyclists are unlucky and the infamous Cape Doctor blows in it will feel like there’s another two. The “Doctor” is the SE wind that can whistle up from the southern Indian Ocean sapping energy for the first half of the circuit - Cape Town to Cape Point. In 2009, at times the Doctor reached 80kms per hour and more. Those 5 serious climbs are there every year!

I’d restarted my personal fitness regime in November last year at home in Gloucestershire after a 6 month “exercise interlude”. If I’m honest the only bit of the training I enjoyed was the chance to listen to some good radio. Radio 4’s Women’s Hour can’t be beaten as the antidote to the boredom of an exercise machine in a sub zero garage. So next week I test myself again in the 2012 Argus. No, I don’t expect to win!

My race is largely against me. I’m the competition. Last year I completed in 3 hours 25 minutes in absolutely perfect conditions – one of the rare occasions when there wasn’t a breath of wind in the Cape. So I’ll be more than delighted if I can match that. The professionals incidentally complete the 110km circuit in about 2 hours 30 minutes. Not that all of the entrants come to compete or even complete within a target time. Some do it for sponsorship to raise funds for their favourite charity or do it for just for fun. The time taken to finish is not important.

Remarkably, the non-cycling Capetonian public are incredibly supportive of the Argus considering the closure of major roads for a significant part of the day. In fact only a few stretches of the most remote parts of 110km route are not generously lined with vociferous well wishers urging sweaty cyclists to continue toiling.

Happily since I arrived in Cape Town in the South African summer frostbite isn’t a worry. On the other hand dehydration and heat exhaustion can afflict the stupid. That’s why I do most of my training early. Just after dawn the temperature is still a pleasant 18-20degC, and it’s no chore to see the sun rise over the mountains in False Bay heading south towards Cape Point, wind or no wind. After 35 years of rehearsals the organisation of the Argus is slick. It runs like clockwork and a credit to South Africa and the Argus organisers.

The safety precautions are impressive. The infrastructure like toilets, signage, refreshments, medical treatment and mechanical help to support the riders is first class. 35,000 cyclists and their machines need a lot of space and marshalling is potentially cumbersome. Dozens of start groups have different but precise start times a few minutes apart and all depart at the time planned with remarkable accuracy. There’s definitely a buzz in the period leading up to the event when it’s not only the cyclists who are talking about the big day.

35,000 cyclists have a lot of families, relatives and workmates who, whether they want to or not, hear a lot about the Argus. In fact it would be interesting to conduct some research into the role the Argus has contributing to community cohesion around the event. In a city still largely divided on racial lines the different groups mix at work but typically not where they live or socialise. Cycling clubs and informal cycling groups appear to facilitate a form of social integration. There’s no doubt that in the new South Africa Argus participation is becoming more and more diverse.

The first Argus was in 1977 and for almost 20 years it was an entirely white event. Sadly no statistics are available but it’s clear that’s changed and the registration of non-white cyclist is increasing annually. There’s a good age profile and percentage of women participating is respectable but could be better. I’ve been on the roads daily and witnessed the proof with my own eyes. Every day, but on weekends in particular, thousands of cyclists are on the tarmac clocking up the kilometres getting ready and generally getting fitter. The health gain must be impressive but the real challenge for the City and national Government is to convert recreational cyclists into commuters.

The Cape Town traffic and pollution levels are as bad as any major city. According to one friend it’s not just safety and environmental issues that may be inhibiting more people cycling to work. His explanation has a familiar ring. He says that there’s a cultural problem. Using a bike is seen as something only poor people do. In other words cycling’s not “cool”. It’s tragic because apparently more than a million of Cape Town’s black and poorer commuters living on the low lying area called The Cape Flats to the south east of the city, where cycling is at least part of the solution to congestion and pollution and could contribute to healthier life styles.

However, preparing for the 2010 Soccer World Cup, the City of Cape Town took a somewhat controversial decision to build a prestigious bus lane and cycle way from the city centre to a predominately white district on the coast north of the city. Sadly this impressive infrastructure is almost completely unused because it’s not only poor black people for whom commuting by bike is regarded as below their dignity. For the white population too, whilst recreational cycling is cool, commuting isn’t! But there’s important lesson for policy makers from the Cape Town experience. Events such as this can have a tremendous impact on the success of the cycle as a legitimate form of transport, as a sport and can act as a catalyst to tempt inactive people into the saddle and towards healthier life styles.

Certainly South Africans and Capetonians in particular are taking up cycling in large numbers. Again I don’t have 5 any statistics. But I don’t need them. My own eyes see the proof on the roads of the Cape daily. Personally I’m in reasonable shape now. Averaging 50/60km a day in warm sunshine helps. So I’m looking forward to the 35th anniversary of “the Argus” and it won’t be my last. Having read the recent CycleClips  report about the 100 year old Frenchman who still enjoys 100km cycling sorties I’m hoping that I might be able to participate for a good few years to come.

The Cape Argus generally takes place on the 2nd Sunday in March every year. Cycletour.co.za/ 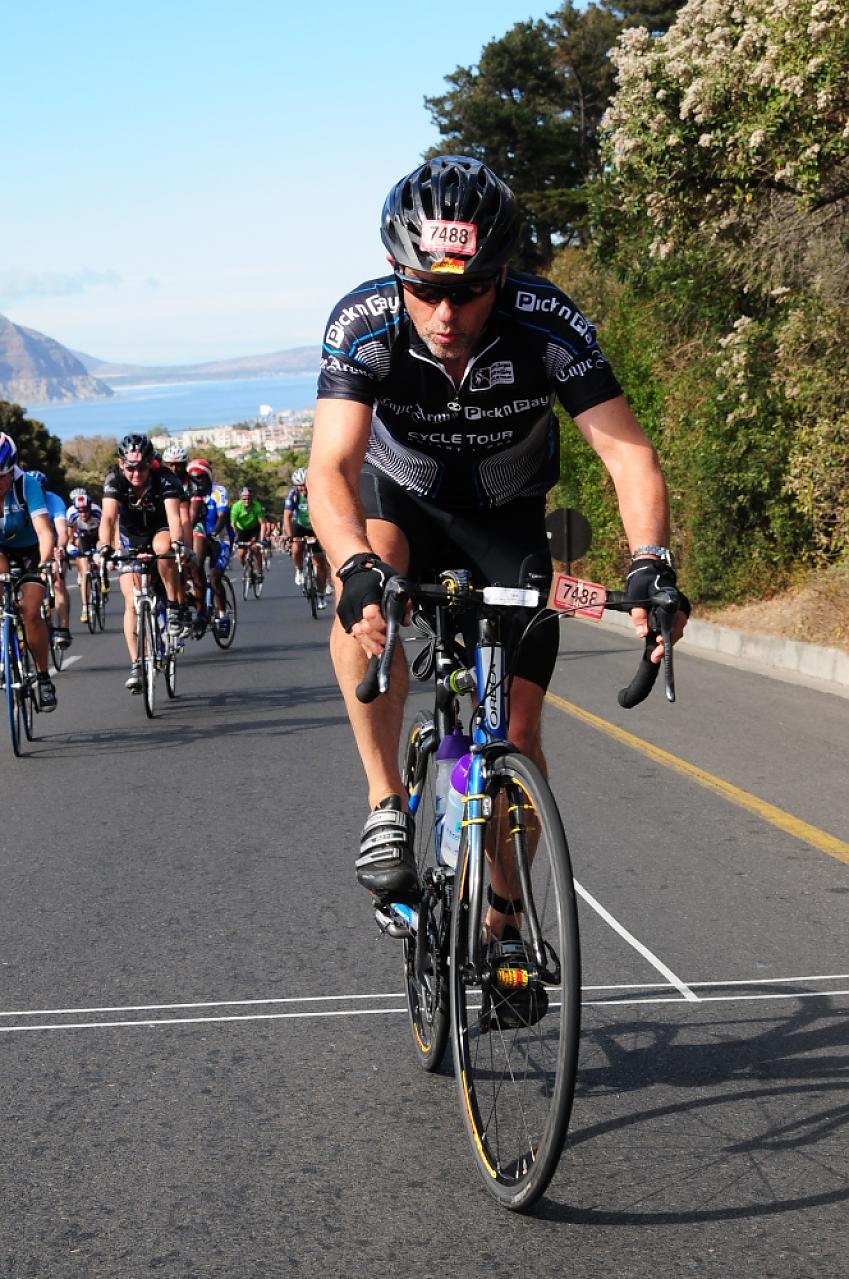 To read how Ian got on, please click on the PDF below

For more info about the event and it’s history go to http://www.cycletour.co.za/.