Cycling UK continues to support the UK to cycle
This remains true during this difficult period with the ongoing threat of coronavirus Covid-19
Read our latest advice on cycling
Happy, albeit muddy faces, at the finish of the Devon Dirt Challenge Ride in April. Photo by Graham Brodie
By roy.wigmore
Friday, 2 November 2018

The last weekend in October marked not only the end of British Summertime but also the end of another very successful Cycling UK Challenge Ride Series. On Sunday 29 October, over 300 people took part in the Emitremmus Challenge Ride organised by Cycling UK Stevenage and saw summertime well and truly reversed.

It hardly seems possible that over six months has passed since the Start of Summertime Special Challenge Rides, the first of the 16-strong Challenge Rides series.  It was organised by Cycling UK Stevenage and held on the last weekend in March. Both of these events are well-established in the Cycling UK calendar, coinciding with the change of clocks in the spring and autumn, with Emitremmus being summertime spelt backwards!

Here we share the highs and lows of another summer of epic rides throughout the UK in 2018:

Banishing the Beast from the East

On the first truly spring-like day of the year, Sunday 25 March, entrants had a choice of three different lengths of ride, the longest being 200km and the shortest 124km. The riders soon left the conurbation of Stevenage before heading out into the gently undulating countryside of Hertfordshire. At this time of the year, riders are soon passing through villages blazing with bright yellow patches of daffodils heralding the promise of warmer times to come - little did the cyclists know what a great summer lay ahead!

The route takes riders across the county boundary into Essex to the village of Thaxted, which is full of history and was even mentioned in the Domesday Book; those doing the longest route venture into Cambridgeshire and as far north as Newmarket in Suffolk before heading for home.

Throughout the ride, there were excellent refreshments served up by willing volunteers, including a cake stop run by the local WI. Cycling UK's Julie Rand took part in the 124km event, along with husband Roland and friend Brian. She wrote a blog about the event, describing the banks of roses in tidy gardens that shone with dazzling brightness against the contrasting green lawns and hedges. 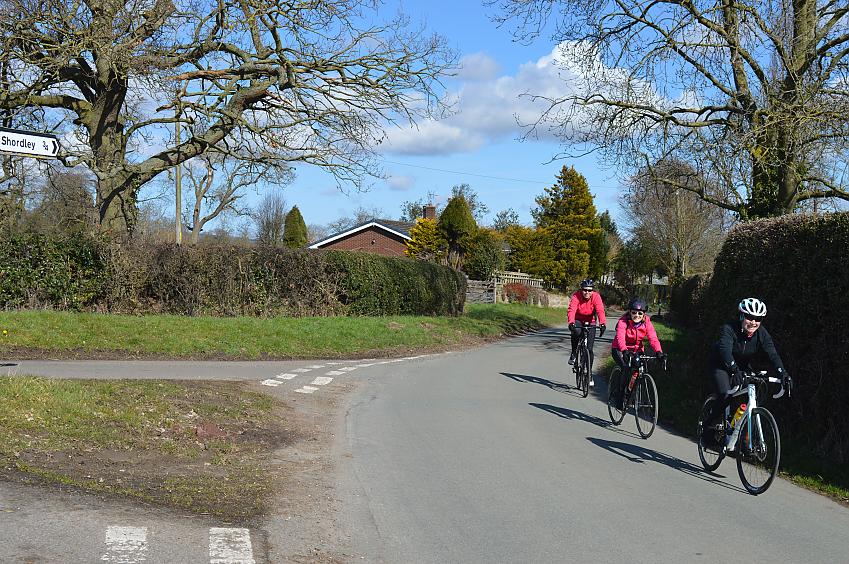 On the same beautiful but chilly spring day but at the other end of the country, 218 riders enjoyed a choice of either a 50-mile or 50km route around the Wirral on Two Mills' Early Season Challenge Ride. The youngest rider was aged just 15 and managed to complete the 50km route. The oldest male was 86 and both he and the oldest female, 76, completed the 50-mile route. Encouragingly, around 40% of the participants were women.

There was a good representation of entrants from many local cycling clubs, although the majority were from Two Mills CTC. Cycle magazine editor Dan Joyce took part in the event and described in this Great Rides piece how, finally, the Beast from the East that had blighted a lot of rides over the winter with its ice and snow was finally beaten.

The sting in its tail

But the Beast had left its mark behind - after many terrible weeks of rain and snow, on Sunday 8 April over 300 riders tackled the hills and moors around Ashburton near Dartmoor to complete the 65km route that comprises the Devon Dirt Challenge Ride, the first off-road ride in the series. Although the tracks had dried out a bit following weeks of appalling weather, conditions still proved somewhat challenging and the event certainly lived up to its name.

However, the organisers received many complimentary remarks about the course and the organisation of the event, and there was a huge variety of participants, including Robin Delve, Britain's aged 60-64 Cyclo-cross Champion 2017, right through to young families. Thanks were also received from a local farmer who received help from a group of entrants in rescuing her cattle!

Stunning scenery from north to south

Happily, by May the fantastic summer for cycling that was 2018 was in full swing with the Grand National 200km and the Between the Parks 100km Challenge Rides on Sunday 13 May, organised by Southampton CTC. Over 120 people enjoyed a glorious sunny day taking part in these rides along Hampshire's beautiful Test Valley between the South Downs and New Forest National Parks in the south of England.

Also in June, were the 50-mile and 100-mile Bob Clift Memorial Cheshire Cycleway Challenge Rides, organised by Chester and North Wales CTC, in which over 250 entrants took part, and the 110km and 200km Windmill Rides Challenge Rides on Sunday 24 June 2018, organised by Essex CTC. By now, the weather was absolutely blazing and the summer days were at their longest and most glorious. 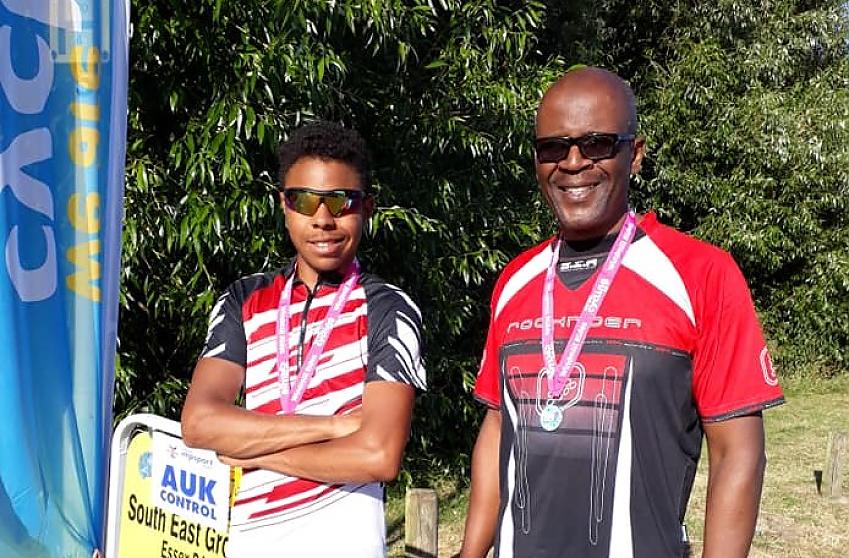 First-time finishers on the Windmill Rides in Essex. Photo by Cycling UK

The Windmill Rides were a new edition to the Challenge Ride Series this year. Winding through the gently rolling Essex countryside and into Cambridgeshire, passing through historic towns and villages with quaint names like Chignal Smealy and Steeple Bumpstead, including Finchingfield, reputedly the 'most photographed village in England', there were plenty of opportunities for refreshment stops and even the occasional drink of cider before returning to the start point in Chelmsford.

Attracting old and new entrants alike, the 200km and 110km routes were popular with riders of all ages, shapes and sizes and were a nice introduction to the joys of long-distance riding for some of them, including the father and son duo above who were both delighted with their medals - although son finished a long way in front of Dad!

Numbers were somewhat lower for another new event in the series, Eden Valley CTC's 100km and 100-mile Lake District rides in July. Nevertheless, dozens of riders enjoyed the spectacular scenery, of the demanding routes, with some amazing volunteers handing out extra water on the route to the thirsty cyclists.

Also in July was the aptly-named 25th Devon Delight Challenge Ride put on by Devon CTC. Organiser Graham Brodie says: "It was cake, more cake and cream teas as 200 riders enjoyed a very hot ride from Newton Abbot up the coast through Exeter to Stoke Canon and back down the Teign Valley to the finish. For many, it was their first attempt at a 100km ride but everybody returned safe and sound back the finish to collect their goodie bags, medals and enjoy birthday cake and a cream tea." 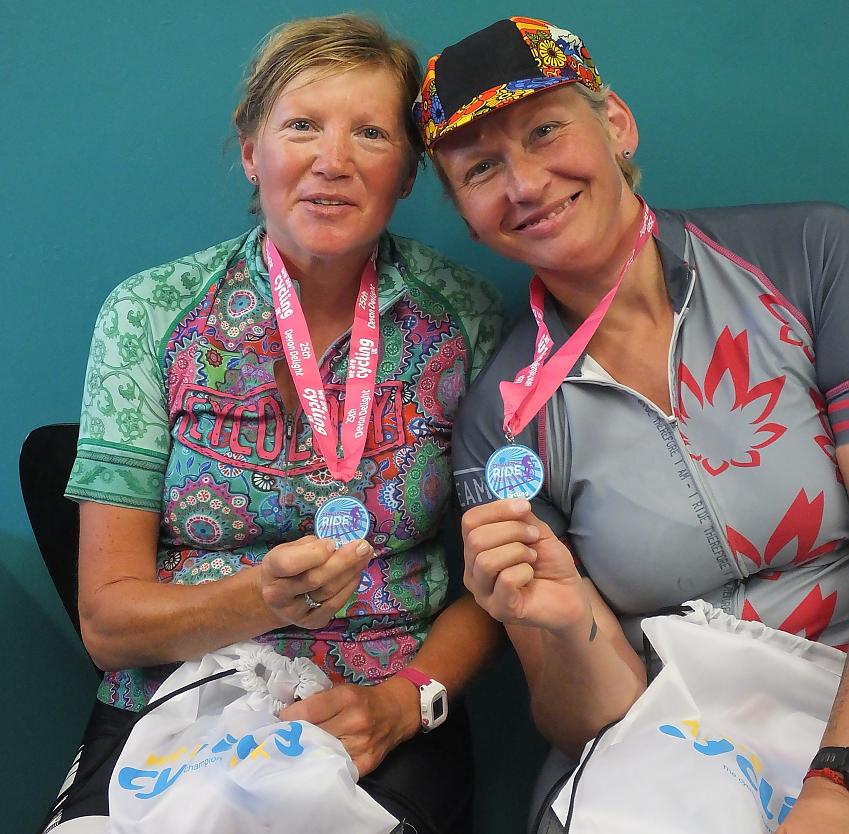 Delighted with the goodies at the end of the Devon Delight. Photo by Graham Brodie, CTC Devon

The fantastic weather continued into August and on another fine summer's day, around 150 riders took on the Tour of the Hills Challenge Ride in Surrey. With a clue in the name, this is a challenging but spectacular 115 km ride involving 2400 m of ascent, including several climbs such as Box Hill, Leith Hill and Barhatch Lane made famous by being included in the London Olympic road races and the RideLondon-Surrey Classic.

This ride is unique in providing an enticing array of 'nutritionally-balanced' meals and drinks, which are included in the very modest entry fee of a few pounds, at the start, lunch and finish, all prepared and served up by a smiling band of volunteers. Not only that, but jelly babies, water and moral encouragement were also handed out along the route itself, somewhat taking the sting out of the gruelling route!

Unfortunately, even with record-breaking spells of sunshine throughout the summer, the good luck couldn't last and it was a very wet ride for those hardy souls who took part in the Wild Wales Challenge Ride organised by Merseyside CTC on, inevitably, a Bank Holiday, Sunday 26 August. Of the 600 registered riders, only 244 started and, of these, just 191 finished. However, those who did were plied with cake and hot drinks and presented with a commemorative slate plaque, alongside their hard-won Challenge Ride medals. 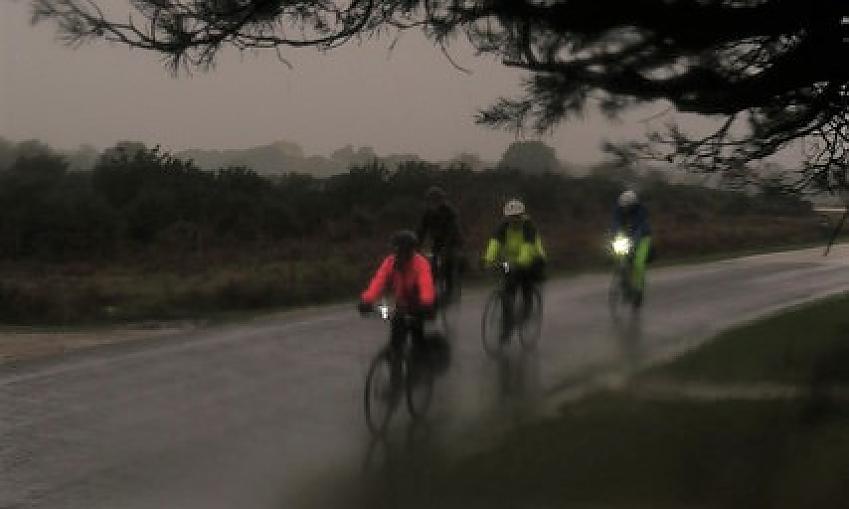 Day turns to night on the Gridiron. Photo by Mike Walsh, Wessex Cycling

Unbelievably, the Gridiron 100km Challenge Ride organised by Wessex Cycling CTC over a month later in October suffered the same fate: torrential rain and high winds meant only around a third of the 1000 entrants took part. They battled through the gloomy conditions in the normally beautiful autumnal scenery of the New Forest to really deserve their medals and commemorative neck warmer. Well done to all those riders who completed the Wild Wales and/or the Gridiron!

But here comes the sun again!

Finally, though, it was a return to sunshine and to Hertfordshire for the sixteenth and final ride in the calendar, Cycling UK Stevenage's 24th Emitremmus. Organiser Jim Brown said: "A chilly start did not put off hundreds of people enjoying a cycling challenge on the first day of official 'wintertime' on Sunday 29 October. Not a race, the 100 km Challenge Ride took the riders to Saffron Walden and back with everyone determined to reach Therfield, where the local WI put on a huge spread of cakes and other goodies." He continued: "There was also a shorter, slower 67km option, the Emit Lite. What was forecast to be a bitterly cold and dull day turned out to be a bright autumn day, with sunshine right through to sunset so a great time was had by everyone."

They made it happen

The Challenge Rides are an affordable but well-run series of rides. They would not be possible without all the amazing organisers and volunteers, whether as marshals, serving refreshments, staffing checkpoints, devising the routes or performing many other tasks, who enabled thousands of people to take part in and enjoy these varied but relatively long rides throughout the UK. Whatever the conditions, they turned out to ensure that those who wanted to could test themselves, whatever the weather or the route could throw at them, and achieve the satisfaction of completing a personal challenge, alongside lots of like-minded people and at a very affordable price.

Keep an eye out for details of next year's bigger and better Challenge Ride Series very soon. If your group (Member Group, Community Club or Affiliate Group) has a ride they would like included in it, please contact us. Also contact us if you're a rider who completed three or more rides in this year's series to apply for a special commemorative medal. 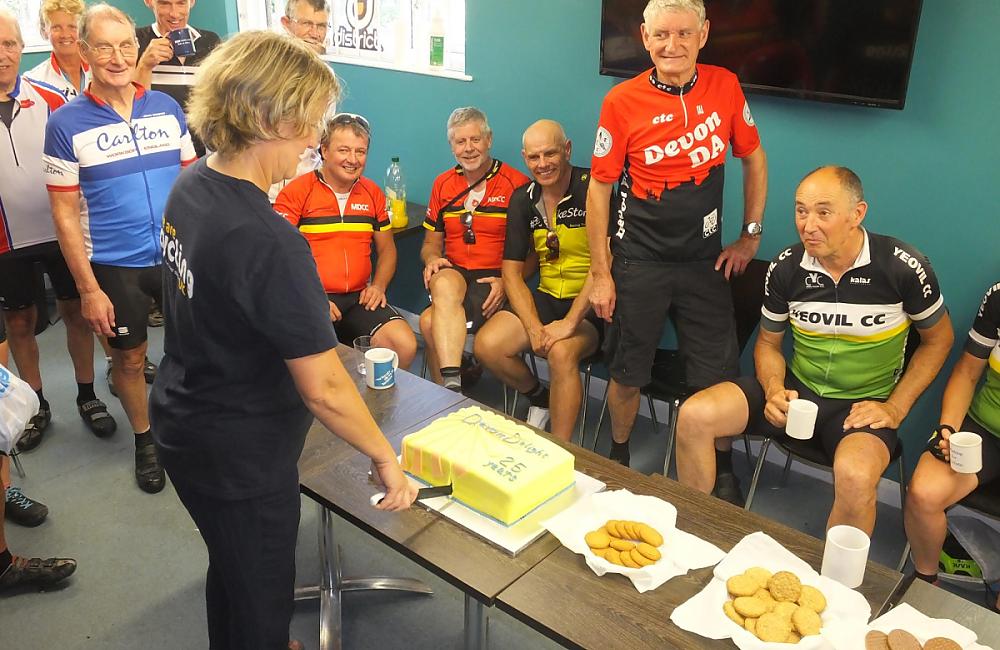 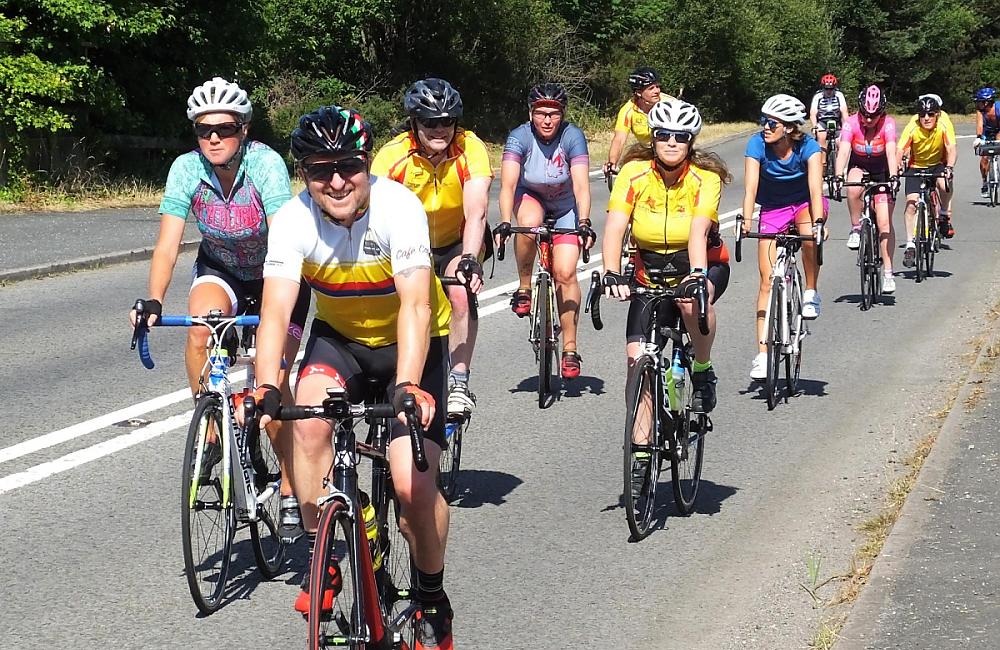 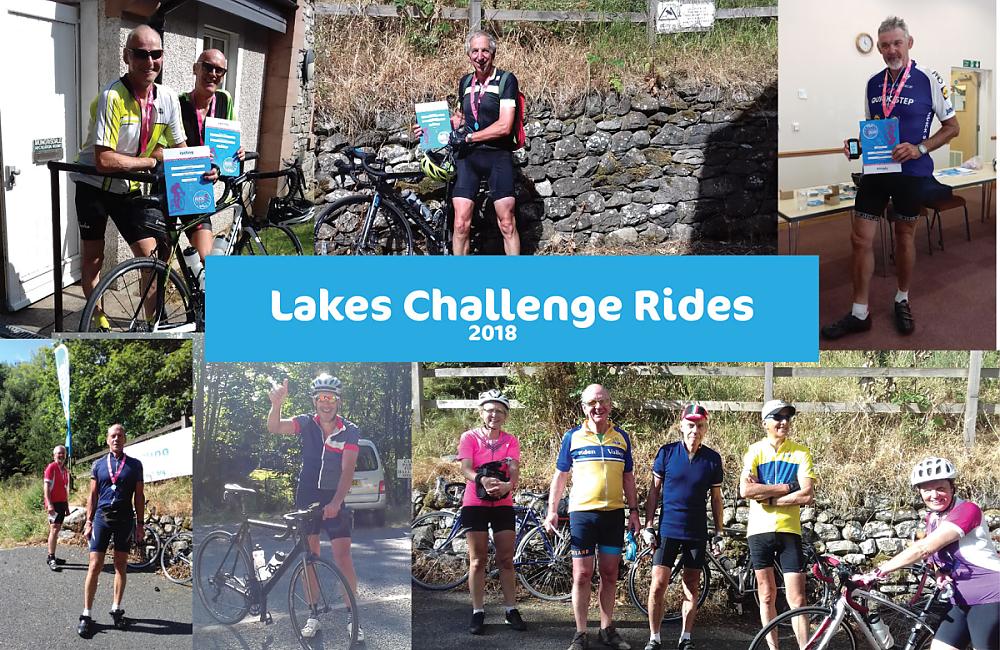 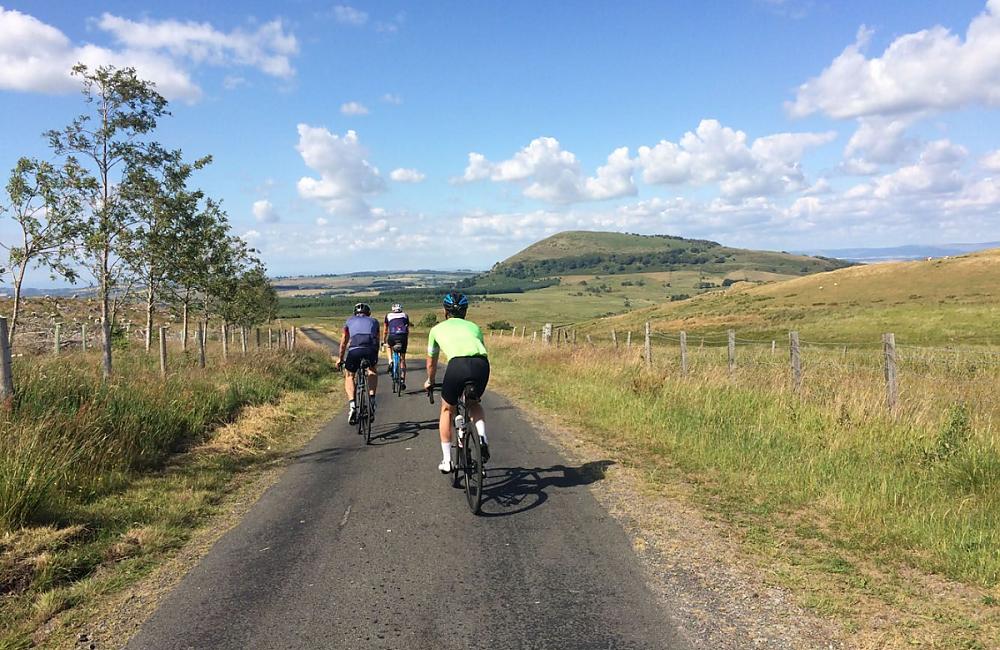 Travellers' Tales: The Devon Dirt View
You too can champion cycling in the UK
Give your support today to help Cycling UK’s charitable work tomorrow. We double every pound you give through other sources to help change lives and communities through cycling.
Volunteer now