Can cycling mindfully improve your ride?

Can cycling mindfully improve your ride?

This Mental Health Awareness week, Cycling UK's communications officer, Christina Bengston spoke to author and cyclist Nick Moore about how a physical health condition led him to mindful cycling, and how through this practice he rediscovered the joy and value of riding a bicycle

This week is Mental Health Awareness Week. Started 21 years ago by the Mental Health Foundation it’s an opportunity for the country to take some time to think about our own mental health and wellbeing and how we might go about improving it.

For many Cycling UK supporters, cycling is fundamental in their wellbeing routine. It certainly is for me as I bimble along to the shops, down a countryside track, or along the canal path to work on my hybrid; cycling is my chance to relax, enjoy the fresh air, look around at nature and stop thinking about the stresses of life for a bit.

So if cycling is already good for our mental health, then surely that’s enough? According to Nick Moore, the author of Mindful Thoughts for Cyclists: Finding Balance on Two Wheels, practising mindfulness when we’re out cycling can massively enhance the way we ride our bikes.

According to a 2015 report by the Mindfulness All-Party Parliamentary Group, ‘mindfulness means paying attention to what’s happening in the present moment in the mind, body and external environment, with an attitude of curiosity and kindness.’

With roots in Buddhism and other Eastern religions, mindfulness has been practised for thousands of years, but it was not until Jon Kabat-Zinn developed a mindfulness-based stress reduction program in 1979 at the University of Massachusetts Medical School that the practice become more widely known.

Studies have shown that practising mindfulness can affect how the brain works, increasing activity in the area of the brain responsible for positive emotions and emotional regulation.

It’s about awareness and concentrating and thinking about what you’re doing. For me that’s mindfulness

The good news is that mindfulness can benefit anyone who wants to improve their mental health and wellbeing. There’s no requirement to be religious or spiritual or follow any Buddhist philosophies, and you don’t have to fork out thousands to be taught mindfulness at a wellbeing centre. You can practice active mindfulness through activities like walking, swimming, yoga and cycling.

“I would describe mindfulness more as being tuned in.” Nick explained. “Tuned into myself, to the bike, to the surroundings and to the traffic. Mindfulness for me is just a fancy word for concentrating.”

“With the book, I tried to keep it quite grounded. It’s about awareness and concentrating and thinking about what you’re doing. For me that’s mindfulness.”

Accidentally discovering how to ride mindfully

After being a road cyclist for over 15 years, Nick was at the peak of his cycling speed and power, he had started getting into event riding and after turning 40 he was also in a financial position to take his cycling hobby pretty seriously. It was at this point that he was diagnosed with osteoporosis in his knees.

“Suddenly I had to rethink it all” said Nick, “it was shattering.”

After just ten days off the bike Nick decided that the physical pain of riding was not as bad as the mental anguish of not being able to ride. But he needed to change the way he rode.

“I have to think differently. I can't just go out and bury myself for three hours or go out and do 200km in a day like I used to.

“It started out by simply tuning in to what are my knees doing. Every pedal stroke I had to think about where is the weight going 'Am I putting too much pressure on this joint?' 'Am I looking after it?' And it grew out of that.”

What are the benefits?

Aside from Nick’s osteoporosis - which is no longer causing him pain - his physical health is fine, but he describes his mental health as “fragile”. For Nick, cycling is his way of keeping himself mentally well.

“So many of our mental health issues come from thoughts that we give too much credence to, or things we might be worrying about over which we have no control or aren’t actually our problem” said Nick.

“I tend to worry about things that I don’t really have any control over, that are not really up to me to solve, and yet I burn through an awful lot of mental energy to no good purpose.”

That’s why “facing the thought of not being able to ride was such a big deal. And finding a way I could carry on was so important, because so much depended on it for me. It’s a large part of what keeps me functional.”

Spending most of his working day looking at a screen Nick said, “it’s very easy to become disconnected and for me, mindfulness is about reconnecting with what’s real.”

“When you’re out on a bike, it reduces everything back to its basics. You’re very aware of 'is it hot or cold?' 'Am I wet or dry?' 'Does this hurt or not?' And that for me is what's so grounding about it.”

Nick went electric four years ago and even though he had once made it a point of honour to catch up to electric bikes if he saw one and overtake them, he’s become a convert. “I’m 100% electric and I love it. I’m the proud rider of the British brand Volt. It’s absolutely terrific, I love it” said Nick.

“I’ve now actually started stopping when I’m cycling and looking around. I even take a notebook and write now while I’m out. I’m noticing stuff and I’m much more conscious of what’s around me.

“It’s been absolutely life-changing for me.”

“Mindfulness is not about drifting about in a dreamy hazy, it’s the opposite. It’s about absolutely being focused and in the moment, and knowing precisely what’s going on every second.

“You can’t live in a permanent state of mindfulness. It’s more about checking in with yourself, when you’re riding or doing anything really. It’s about taking a moment and taking a step back, checking in.”

Nick has shared his four top tips for having a go at practising mindful cycling yourself. Why not have a go on your next ride?

1. Soft focus – taking in the edges

“It’s very easy to get blinkered tunnel vision when you’re riding. But if you bring in your peripheral vision. Not physically moving your head but just becoming conscious of what’s in the periphery of your vision. Broadening your viewpoint also broadens the mind, and calms everything down.”

Going up hills might not be everyone’s favourite part of the cycle ride but it is a necessity. For hills you should practice the opposite of the soft focus and narrow in on what’s right ahead of you.

“Focus on a spot just ahead of you and just ride that bit. Don’t worry about the fact that the hill is half a mile long. Once you’ve done that bit then ride up the next section.

“So instead of it being one long hill half a mile long, it's lots of little tiny hills, and you can ride up all of those.”

Breathing is a very important aspect of mindfulness and meditation, focusing on the breath helps to slow everything down and aids relaxation. We usually go about our day without paying much attention to our breathing, but when we’re out cycling we have a unique opportunity to really concentrate on breathing.

Nick’s technique involves “imagining that you’re inhaling in the road in front of you. Almost sucking it up underneath you. Drawing the road under you with each breath and then blowing it out behind you.”

4. Listen to the ride

“Use all your senses, tune everything in. Being not only aware that there’s a car coming, but what sort of vehicle is it? Be aware of colours, tune into different things at different times. Start noticing all the different greens, start noticing the birds, what animals are in those fields? Just being aware of where you are and what you’re doing. 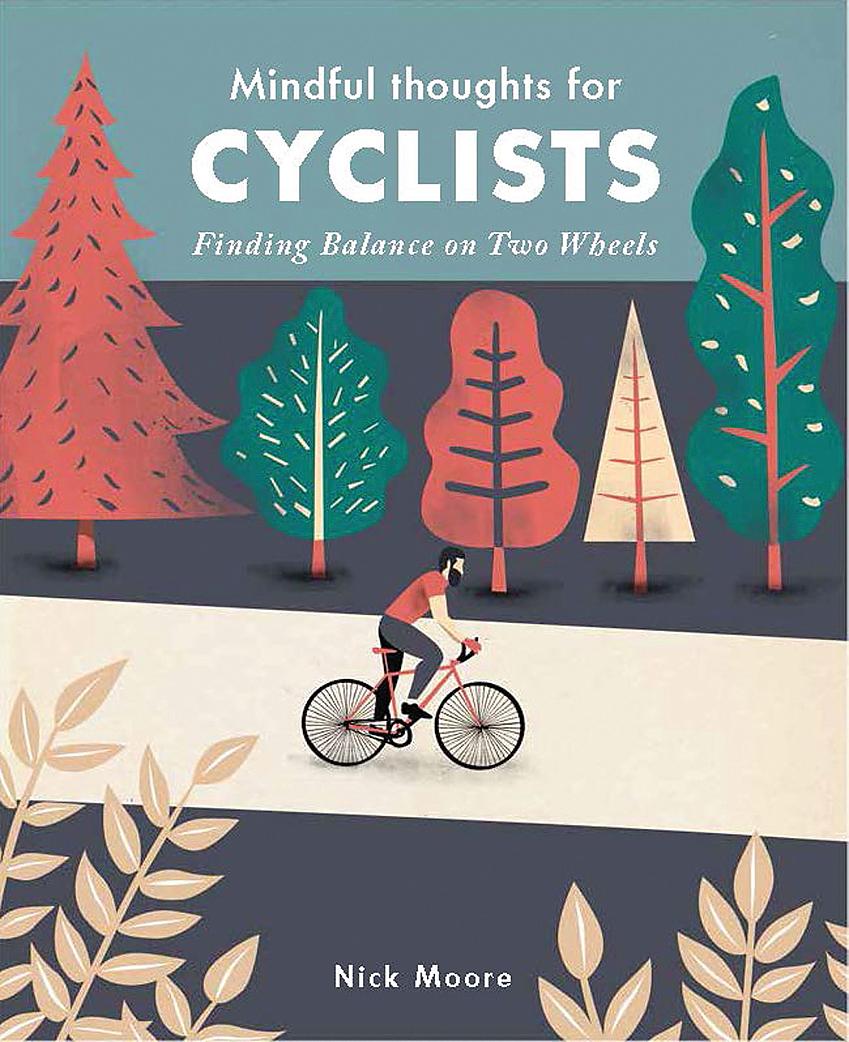 Mindful Thoughts for Cyclists: Finding Balance on Two Wheels by Nick Moore is available in most bookshops and in National Trust shops.