Gates at the crossing have been locked. Photo: Ramblers Scotland

Cycling UK has joined several outdoor organisations calling for the Dalwhinnie level crossing in the Cairngorms to be reopened. Its recent sudden closure has restricted access to walkers, cyclists and others to a large number of tracks, hills and to Loch Ericht, raising potential safety fears

A group of outdoor organisations including Cycling UK in Scotland, Ramblers Scotland, British Horse Society, Mountaineering Scotland, ScotWays and Scottish Canoe Association have come together to launch a petition against the closure of the Ben Alder level crossing, just south of Dalwhinnie rail station in the Cairngorms.

The gates of the crossing were locked by Network Rail on 28th July with no warning given to the local community. The suggested diversion involves a less direct route through an underpass and this has led to concerns that some people may continue to cross the railway line by climbing the locked gates at the crossing, putting themselves at risk.

According to the Scottish Rights of Way and Access Society (ScotWays), the level crossing has been in use for many years and is recorded as a public right of way, providing a vital link in Dalwhinnie’s signposted local path network. It also forms part of an important route for walkers and cyclists heading into the Ben Alder mountains alongside Loch Ericht and leads to the Road to the Isles. Core paths lead to both sides of the level crossing. 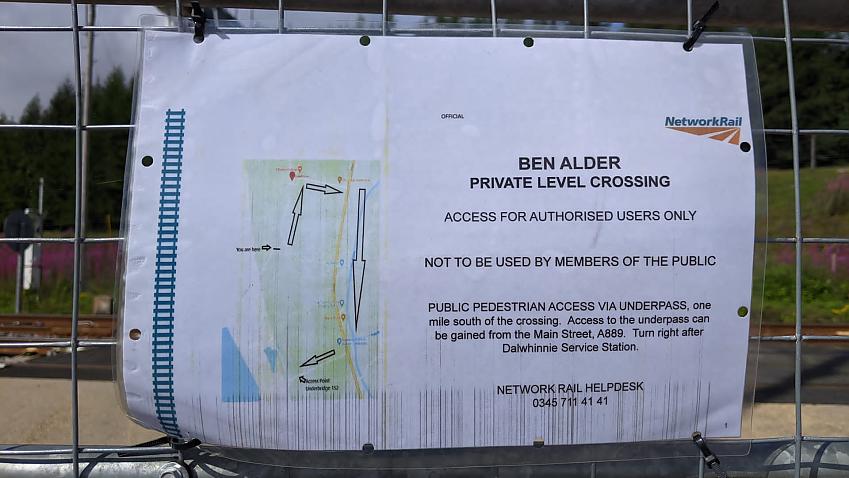 A notice states there is no public access to the crossing. Photo: Ramblers Scotland

However, Network Rail does not agree with claims that the crossing represents a public right of way, considering it to be private.

Jen Dickinson, chair of Dalwhinnie Community Council, described the effect of the closure on the local community:

“This closure has had a significant impact as it’s a popular route which has been used for a long time. The community council and two local estates recently completed maintenance of the walkers’ car park near the level crossing to ensure safer parking and emergency access to the estate at all times. Local dog walkers and residents have lost a core path, with all local trail maps online and in situ around the village now redundant.

“Both the new café/bar and hostel on Station Road are already seeing a decline in passing trade, so there are economic implications too.”

Another concern is that inadequate signage may result in people taking risks, according to Eleisha Fahy, senior access officer at ScotWays:

“The only signage about the crossing closure appears to be at the crossing so if you are approaching from the Ben Alder side you would be unaware of the diversion until the last minute. We’re concerned that this may encourage people to take risks and climb over the gates at the crossing, which could be dangerous.”

“We’re supporting this campaign and petition because we want Network Rail to reopen the crossing and restore this vital link to the local community and to people coming to the area to enjoy the outdoors.

“We would like there to be a full consultation involving local people to work out how access to the crossing can be safely managed in the longer term.”