A local resident of Eastham Wirral and a Cycling UK member, Sylvia is living proof that you’re never too old to ride. Cycling has helped her enjoy retirement and support others.

Cycling UK member Sylvia Briercliffe, aged 88, is a cycling enthusiast with an aspiration to encourage more people to ‘Not Stop Cycling’ once they hit retirement age. Having learnt to ride at the age of eight, Sylvia has enjoyed many years of cycling through the rolling hills of her hometown near Pendle, Lancashire. Despite her love for cycling, Sylvia took a lengthy break to start a family and pursue a career as a social worker, only returning to cycling upon her retirement. Although she was off the bike for a long time, Sylvia ensured she gave her children the gift of cycling.

Unlike others who tend to reduce their level of physical activity upon retirement, Sylvia decided she was going to up her game and do her best to remain active and just have fun. So, she bought a new bike and got back into cycling, taking every opportunity to ride with her family, which now includes several grandchildren.

Cycling is so good for so many things.  It can really help the physical and mental wellbeing of retired people.  Keeping active beyond 65 will hopefully ensure people are healthy enough to enjoy their retirement from their own home rather than a care home.

Sylvia said: “Cycling is so good for so many things. It can really help the physical and mental wellbeing of retired people. Keeping active beyond 65 will hopefully ensure people are healthy enough to enjoy their retirement from their own home rather than a care home. Cycling with a group provides pensioners with a social support network and prevents isolation. I’m leading by example and would like people to come and join me. It’s great fun and I encourage people of similar age to ‘Not Stop Cycling’ - as they’re never too old to ride.”

Since rekindling her love for the bike, Sylvia has cycled in Greece and Portugal. She bravely took part in an epic 1000-mile challenge to raise funds of nearly £2000 for the Alzheimer’s Society and the Live! Project, which she has supported in a voluntary capacity for more than three years. Riding a distance of at least three miles per day, Sylvia completed her challenge in 11 months, visiting Anglesey, Liverpool, Wirral and Chester on her way - and at the age of 85! 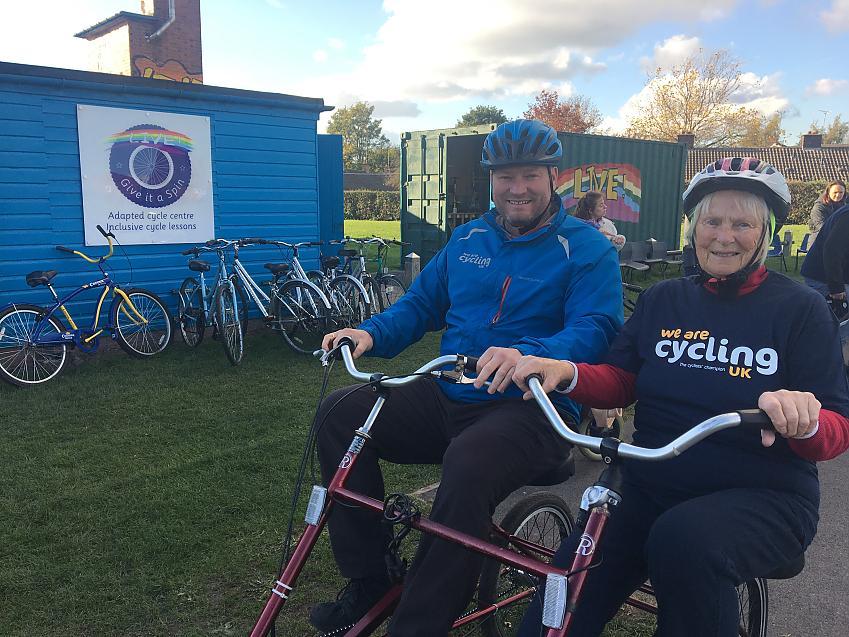 Sylvia giving Cycling Development Officer, Chris Alston, a tour of the circuit at Live! Project’s ‘Give it a Spin’ Inclusive Cycling Session

Live! Project is also the home of Bren Bikes and provides a number of activities for children and young people with and without disabilities. Sylvia volunteers her services every Monday to support their ‘Give it a Spin’ inclusive cycling session. She helps the team set up each session, fit helmets and even pilots the side-by-side adapted bikes around the outdoor circuit, which sits beside the Greenway segment of the National Cycle Network. She's a really valued member of the team and goes about her duties with a huge smile on her face.

Alongside her work with Live!, Sylvia has supported a number of memory cafes across the North West, giving talks on the benefits of cycling for people with dementia. Having been diagnosed with angina in 2003, Sylvia was keen to show people that physical activity was key to the prevention of and recovery from heart disease and has advocated the benefits of cycling at her local British Heart Foundation Support Group. She's well-aware of the emotional benefits of cycling too; following a sad breakdown in a 32-year relationship, Sylvia became very down but kept cycling to keep going mentally.

Sylvia said: "I cycled to a local farm to buy some eggs and, on my return, the sun suddenly came out and I was presented with the most beautiful blue sky. That made me realise that my cycling was going to help me get back to a good place and it really did.” 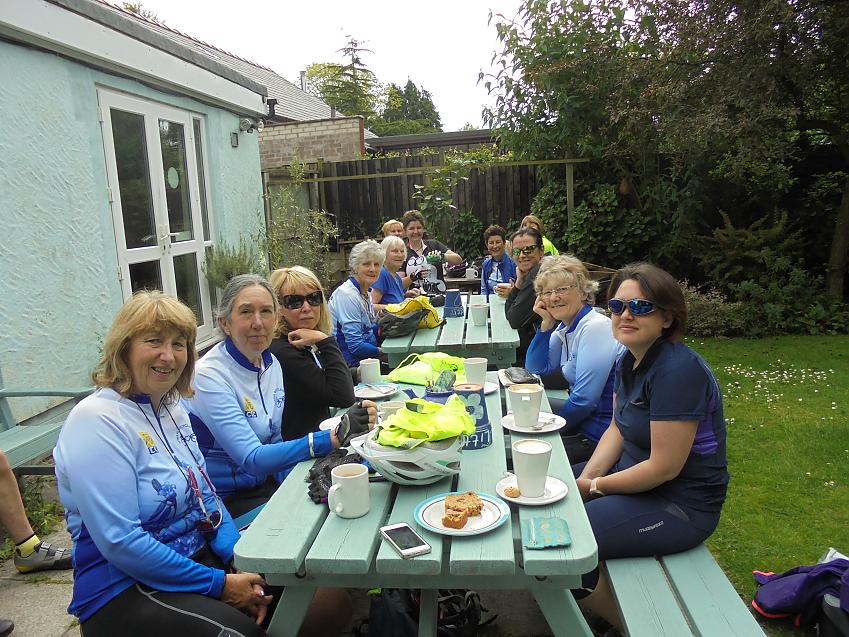 Now Sylvia is keen to emphasize the importance of social inclusion and how riding within a group helps people come together. She's taken part in many group rides hosted by Cycling UK, including the World Suicide Prevention Day – Cycle Around the Wirral, and has ridden with Cycling UK's Wirral Bicycle Belles on several occasions.

Keen to keep moving at all costs, Sylvia recently bought an e-bike, aptly named ‘Eli’ for the occasions when she has to tackle the local hills. Her trusty Apollo Etienne, known as ‘Eti’, can sometimes get a bit too heavy. 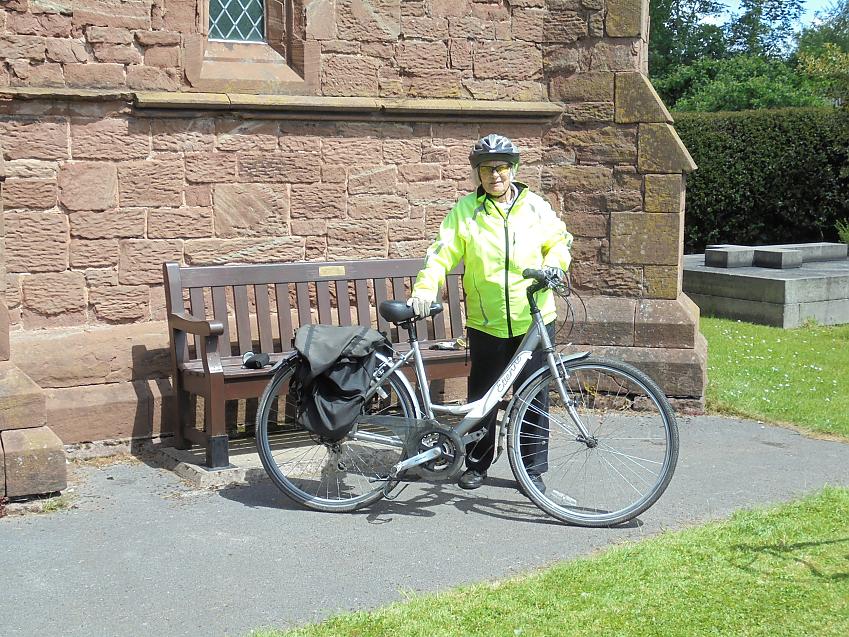 Sylvia with her bike ‘Eti’ at Capenhurst Church, Cheshire

Sylvia is a fantastic ambassador for cycling and really is proof that you're never too old to ride.

Live! Project welcome people of all ages at their ‘Give it a Spin’ sessions. For anyone unable to ride on two wheels, there is likely to be an inclusive cycling session not too far away with a wide variety of adapted bikes that might help you continue to ride.

Celebrating a 90th birthday with a cycling party View